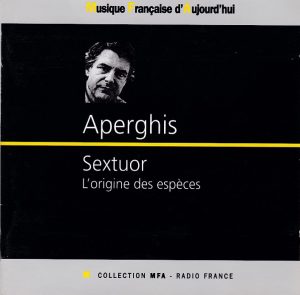 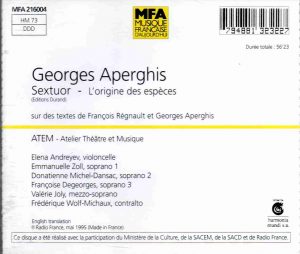 Born in Athens, Greece in 1945, Georges Aperghis, like Xenakis, established early on in Paris France, at the age of 18. He was one of the inventors, in the early-1970s, of “theatre musical” – music-theatre, or at least the French branch of it – and still remains today one of its main exponents. In 1976 he founded his own company, Atelier Théâtre Et Musique (ATEM) to produce his own works. The company was first based in Bagnolet, a suburb north-east of Paris, and then moved to the Nanterre Theatre – a suburb north-west of Paris.

“Théâtre Musical”, even limited to its French sub-category, defies any definition and has been as varied as the composers who tackled it. With Aperghis, it meant, among other things, playing in other venues than traditional opera houses – the famous Avignon Summer Theatre Festival was one of his main outlets in the early years – , with small instrumental ensembles, and more important still, rejecting the traditional operatic “plot”, linear narration and psychological relationship and dramatic conflict between characters.

Sextuor (Sextet), subtitled “The Origin of Species” was premiered in Nanterre in May 1993 and it was my first live encounter with the music and productions of Aperghis. It was a revelation. The composer’s own staging had much to do with it: it was wonderfully inventive, imaginative and poetic, supported by wonderfully inventive, imaginative and poetic light design by Daniel Levy. But it had to do with the music as well.

It happens that that same season, a few weeks earlier, ATEM had produced and Nanterre had premiered another highly original composer-staged music-theatre production – German branch -, Heiner Goebbels’ “Ou bien le débarquement désastreux”. But as “wonderfully imaginative, inventive and poetic” as was Goebbels’ own staging, the music, when heard on its own – a mix of world music, free jazz, hard rock and contemporary classical – isn’t all that convincing (see my review). Not so with Aperghis.

The subject-matter and texts certainly do not seem very inviting. Provided by Aperghis himself and François Regnault (a noted French writer, philosopher, specialist of psycho-analysis and French classical theatre), they deal, as announced by the subtitle, with the origin and evolution of species, sounding like a poetic catalog of lost species, to which Aperghis has added various and apparently unrelated interludes, on death, birth, love, Cinderella.

What Aperghis goes on to prove is that anything, any text can be made into wonderfully imaginative and poetic recitative, arias and ensembles. The work is scored for five female singers and a cellist acting also as speaker (you try it, cellists! play a Bach suite and simultaneously recite a poem by Keats or whoever you wish).

In 1977 and 78, Aperghis had written for the contemporary singer and actress Martine Viard a series of 14 solo pieces, Récitations. Therein, he invented something very special, a witty, playful, highly virtuosic modern equivalent for voice of Paganini’s Caprices. No text, only phonemes, shards of texts, stuttering, obsessive repetitions, huge leaps, using the full gamut of vocal ranges. Those techniques and vocal games are put to full use in Sextuor, from solo to five interlaced voices, a cappella or with support of the cello. It is fascinating – and often very funny. With an instrumental support limited to the cello he music is lean and light, dynamic and still colorful. One of Aperghis challenges – masterfully met – was to compose for five voices of very different timbral quality, which he doesn’t try to blend as much as he intermingles them. He uses various vocal techniques, including some that sound close to the kind of throaty folk singing you may hear in Corsica or Sardinia (track 4). When it is text that he puts to music (rather than senseless phonemes) – and there is lots of it – one remarkable feature and achievement of Aperghis -and one that is rarely met in classical vocal music – it that it always remains entirely intelligible: Aperghis has invented a conversational mode of virtuosity.

All this sounds VERY French and may not be for all tastes, even those versed in contemporary music. I personally find it to be among the most, well, wonderfully inventive, imaginative and poetic essays in vocal virtuosity to have been produced in the last 50 years.