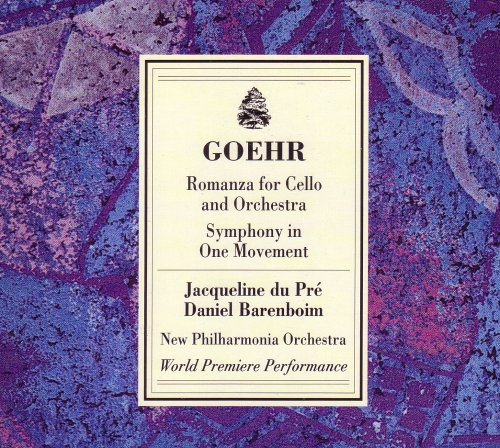 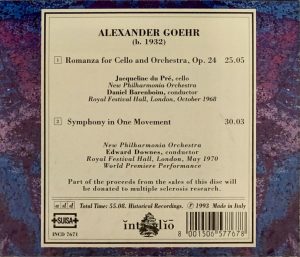 The exceptional value of this recording compels the music lover to disregard, in Alexander Goehr’s Romanza, the annoyance of the constant static that mars the sonic quality of what is visibly an air-check off the radio, that otherwise comes in sound that is clear and vivid enough. Goehr composed his Romanza for and dedicated it to Jacqueline du Pré, who premiered it with her recently-wed husband Daniel Barenboim at the Brighton Festival, in April 1968. Here the product info claims that the performance was given in October 1968 at the royal Festival Hall in London, and I have no way to check.

“Romanza”: the title is deceptive if that it lets you expect a short, minor, romantic work. It is 25 minutes long and Romanza is an important and magnificent, fully-fledged Cello Concerto, displaying all the hallmarks of Goehr’s compositional style: mostly brooding and lyrical in Goehr’s own, atonal way – but maybe even more lyrical and melodious than usually with Goehr, thanks perhaps to the instrument and the performer for whom it was meant, although I just heard Goehr’s Violin Concerto from 1962 and it is also very lyrical, see my review of EMI British Composers 5 86189 2 – with some passages of great mystery and sensuousness, interrupted by explosive outbursts to the point of brutality, freely rhapsodic but with a sense of logical unfolding that one perceives even if one doesn’t analyze it, certainly not “easy-listening” but full of wonderful touches of compositional imagination. The repertoire is unique for du Pré (other than Priaulx Rainier’s Cello Concert, which she performed once and hated, I’m not aware that she played and even less recorded any other piece of contemporary music). This should be a must for any du Pré admirer – even if they admire her more for Elgar and Brahms than for hear feats in contemporary music.

The Symphony dates from two years later and we get here the premiere performance from May 1970 by Edward Downes conducting the same New Philharmonia at the same Royal Festival Hall, London, in fine sound (more about that anon). There is nothing “lyrical” or “melodious” here; as in the Romanza, there are moments of broodingness – the beginning strikingly features a cello solo cantilena after a short orchestral intro, and if you are not listening attentively you might think you are in the Romanza’s next movement – but you soon realize that this is only the pent-up, menacing vortex of energy that will rise in the course of the symphony’s half-hour, pile up, erupt and lead to a climax (around 24:30) of brutal violence, for which I can see only Varèse’s Amériques as a forerunner. The composition is definitely not for all ears, but it is impressive, awesome, and quite unique.

These two works have been granted studio recordings, Romanza by Moray Welsh and the Royal Liverpool Philharmonic under David Atherton on Unicorn UKCD 2039 (with Goehr’s Metamorphosis/Dance op. 36), barcode 053068203920, and Symphony on NMC D023  performed by the BBC Scottish Symphony Orchestra conducted by Richard Bernas (it is paired with Goehr’s Piano Concerto); given the sonic problems of Romanza, the Unicorn disc must be given preference. On the other hand, it is the live Intaglio recording that has, and by a wide margin, the most vivid sound, presence and impact over its competitor; in fact, the sonics of the NMC disc are so dulled (and the interpretation as well) that you could easily miss that the Symphony is the powerful masterpiece that it is. So the Intaglio disc remains indispensable, as a document for Romanza and as a first choice for the Symphony. I am usually not too well disposed towards the kind of bootleg label as Intagl’io, but hey, who else has brought these invaluable recordings to the public? So: thank you.