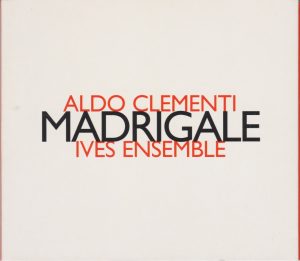 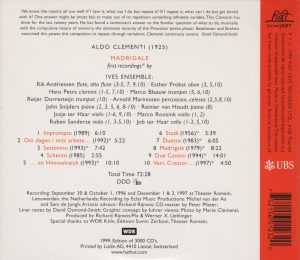 70+ minutes of stern canons, at times verging on the boring – but also, in the long run, eliciting a genuine fascination
Originally posted on Amazon.com, 5 October 2007

70+ minutes of slow-moving, atonal canons for various but always sparse, Webern-like instrumentarium, from clarinet-violin-viola-cello (track 1 Impromptu) to Flute-oboe-2 trumpets-percussion-piano-violin-viola-cello (track 10 Veni Creator), by way of clarinet-flute (track 7 Duetto), flute-violin-piano (track 9 Due Canoni), trumpet-piano-violin (track 6, Studi) and so forth. Stern, unseductive, at times verging on the boring – but also, in the long run, eliciting a genuine fascination. Sometimes it is even downright fun, as in Madrigale for 2 piano & percussion (track 8), which sounds like  some zanily out-of-joint clockwork mechanism. The ten works weren’t apparently composed as a cycle, but over a long period of time, from 1956 (“Studi”) to 1999 (“Veni, Creator….”), but they sound entirely coherent as a cycle. Those with a taste for the slow-moving music of Morton Feldman might enjoy this.