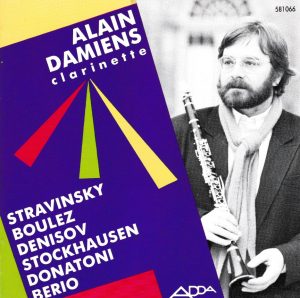 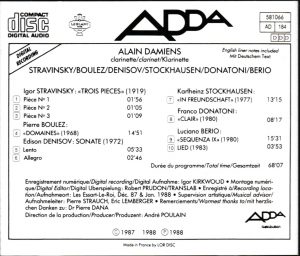 (For backcover photo with barcode see entry on Amazon) 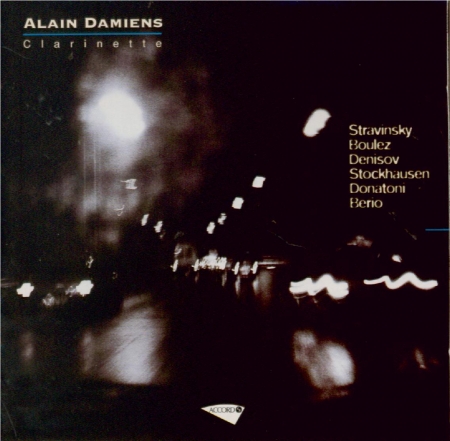 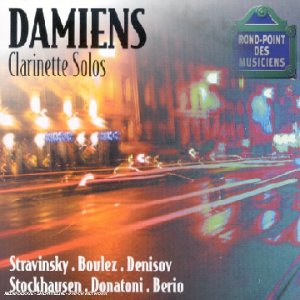 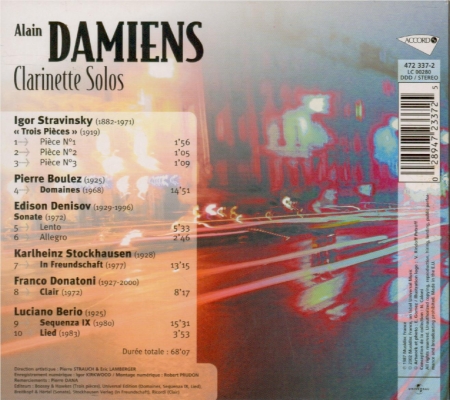 If you are a fan of contemporary clarinet, this is a must-have
22 August 2021

I find it absolutely laughable when a critic quotes his/her partner, on the mode “I was listening to the music, and my wife/husband came out and commented…” Oh yeah? And so what? Does your cleaning person also have something to say about the music, or the parking valet? I mean, maybe your wife/husband, or cleaning person or parking valet are true connoisseurs about (the) music and then their comment will be of interest, but it is not as your husband/wife they are talking and interesting, not in their capacity of cleaning person or parking valet, but as a connoisseur. That kind of quoting appears to me as a populist way of invoking the “layman’s” opinion, as if the layman’s opinion was pertinent to the music-lover looking for an “educated” analysis of and advice on the music.

So it is with an amount of glee and braggadocio that I will now bare my chest  to the firing squad and use the same trick that I am otherwise so critical of.

I was listening to Boulez’ Domaines with my 14-year old son – this is the version for solo clarinet, in fact the original version (also known as “Domaines I”), begun in 1961 and premiered in 1968, of a piece expanded the same year to clarinet and ensemble, known as “Domaines II”, and I’ve reviewed the latter’s recording by Michel Portal and Boulez on Harmonia Mundi. At one point my son asked: “What instruments are playing?” “- Clarinet.” “- Really? But how many?” “- Well… one!” “- Really? It sounds as if multiple instruments were playing…”

I hadn’t perceived it that way, but that is, I think, the best tribute one can give to Boulez’s piece.

On the other hand, I’m not sure Boulez would have been so happy with my son’s next comment. I was reading out loud, with a measure of irony, the liner notes’ comment about the “severity” of the music. To which he commented: “well, yes, if you try to listen carefully, it might get a bit boring. But as background music, it’s great!”

Boulez as background music, really? Boulez by Muzak, Domaines in the supermarket or the elevator? I don’t think so! There’d be slaughter in the elevator before they reached the 3rd floor! The instrument shrieks, jumps, whispers, trills and flatter-tongues with great prodigality. What it does not is go for easy seduction. When the music becomes more pensive and appeased – I wouldn’t say “melodic” – you know you’ve moved to the next track.

Sorry clarinetists, but the solo clarinet is always going to be a problematic instrument: it is by-and-large, monophonic (despite the few “special effects” included in the instrument’s contemporary extended techniques, or Stockhausen’s attempt at imitating polyphony), which greatly limits its possibilities. It is probably telling that there was no great piece for solo clarinet written at the end of the classical era (when the instrument came of age as a solo instrument) and in the 19th century, equivalent to Paganini’s Caprices or Ysaye’s Sonatas, and that the masterpieces for the instrument were always written with an accompaniment of piano (Brahms… ), or string quartet (Mozart, Weber, Brahms….) or in a trio (Mozart, Brahms…). And it isn’t specific to the clarinet, of course. Search Wikipedia’s alphabetical “list of solo cello pieces”, and you jump from Bach to the 20th century; the only 19th century composition included in the list being Sibelius’ Theme and Variations in D minor – and it was discovered only in 1995.

20th century composers on the other hand have tried to circumvent those limitations of the instrument, by expanding its performing techniques (link will open new tab to an online tutoring page), to produce sounds that didn’t necessarily go for immediate beauty (“only idiots think that beauty has to be beautiful” – I can’t find who that witticism is from, some French counterpart of Oscar Wilde I think), sounds that go counter the “mellowness” associated with the instrument in the romantic era, and that can be strident, ugly, aggressive, but go for maximum expressivity.  . Expressivity doesn’t necessarily mean “accessibility” or “enjoyability”. So much for Boulez.

But Boulez is the toughest nut to crack here – “severity” indeed ! (I find the version with ensemble more appealing), and he almost – just “almost” – makes Stockhausen’s “In Freundschaft” and Berio’s Sequenza IX sound easy-listening, and it would be unfair to both composers to say that they abandoned any attempt at making the clarinet sound “silky”. But make no mistake: their “easy-listening” doesn’t mean “easily appealing”, unless you find appeal, either as a listener or as a performer, in challenges. 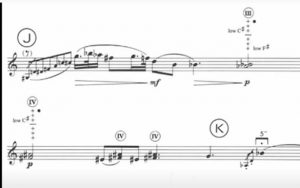 That said, the vocabulary – or rather, the 20th century extension of it – appears relatively limited: flatter-tongue, shrieks, a few “double tones” (as in Berio’s Sequenza at 7:42, in which the second tone is more a vibration than an actual tone). Starting at 8:05 in Stockhausen’s “In Freundschaft” there is a continuous tone (on two descending notes) held so long (34 seconds) that I wonder if it is produced by “circular breathing” or just the clarinetist asked to blow until he can’t anymore, and something happens at 10:35 that I can’t quite name, but that evokes the tongue clicks from certain African dialects. There is a

wonderful – but very short – passage in Berio’s sequenza, at 4:45, fast up-and-down breezily whispering arpeggios, where the sound of the instrument is accompanied by clicks and I’m not sure if the effect is intended or if those sounds are only the noise of the clarinetist’s fingers on the keys. I don’t hear much difference between Berio’s Sequenza and his short Lied, although the liner notes contend that Lied is playable by amateurs.

Ultimately I find that these compositions work better if taken as “narratives” – the clarinet telling a story, and it’s up to the listener to invent the meaning – rather than as “pure music”. Denisov moves slowly and dreamily and with quarter-tone glissandos (there’s that too at one point in Stockhausen, very shortly)– and then, after 3:30, he shrieks, but at least his shrieks can evoke some despaired human voice, and, in the Allegro second movement, there is a nice sense of breathless anguish. I can relate to that. In “Clair”, Donatoni also shrieks with great volubility, but in an over-excited manner that is quite jocular. The music retains an undercurrent of over-excitement even in the softer passages. The frenzied dance starting at 3:05 brings some passages of Stravinsky’s Soldier’s Tale to mind.

And then, Stravinsky’s short Three Pieces for clarinet, from 1919, with their echoes of the contemporary Soldier’s Tale, show what can be done with the clarinet when it combines narrative and musical appeal.

Alain Damiens was, from its very foundation in 1976 – and, I believe, still is today – the clarinetist of Boulez’ Ensemble Intercontemporain, so one can just assume that his readings are authoritative. Still, I have compared Damiens’ “In Freundschaft” to the version by Stockhausen’s actual “friend” and dedicatee Suzanne Stephens: she’s more relaxed and ample, Damiens is tighter, less overtly sensuous, more dynamic in the dynamic passages, and I find that both approaches work. Stockhausen’s work is an attempt, if I hear correctly, to imitate a three-layer (at least) polyphony, and interestingly the sonic placement of Damiens tends to change with each layer; I don’t know if it was intended (it doesn’t seem entirely systematic, and it isn’t extremely pronounced either), or if the final recording was patched from many takes in which the clarinetist wasn’t placed exactly the same relative to the microphone. I’m inclined to give them credit that it was intended. Following Damien’s Berio Sequenza with the score (a process that has helped me concentrate better on its events, but not to enjoy the piece more, on the contrary, as it tended to reveal what amounts to a catalog of events and gestures), I find him very exact but also remarkably silk-toned and sensuous. 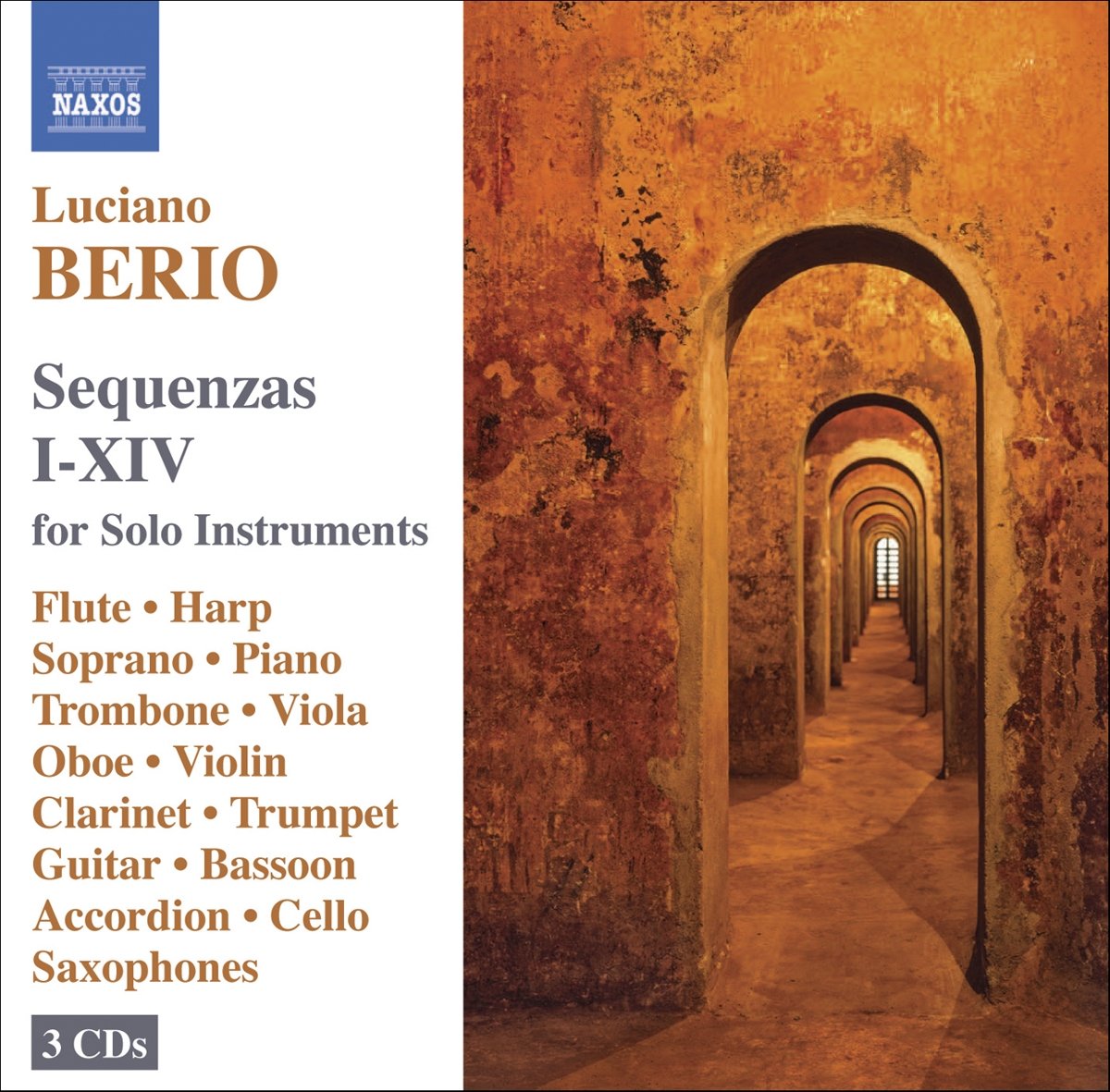 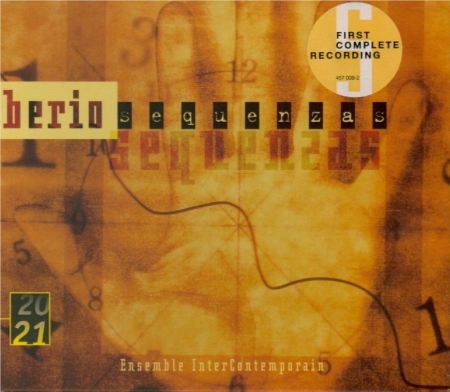 (recorded anywhere between 1994 and 1997, the booklet doesn’t ascribe the recording dates to the individual Sequenze). It is also a matter of tone: clarinet presence on Adda is slightly more vivid and sensuous than both other versions, and Damiens’ remake is more aggressive in the shrieks. Sony’s survey remains an indispensable acquisition for the fan of Berio, but Adda’s version is slightly more approachable.

Anyway if, as a player or just as a listener you are interested in the contemporary clarinet, this is a must-have. TT is a generous 68 minutes. Liner notes by the way are by French composer Philippe Manoury.