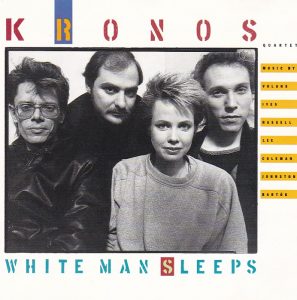 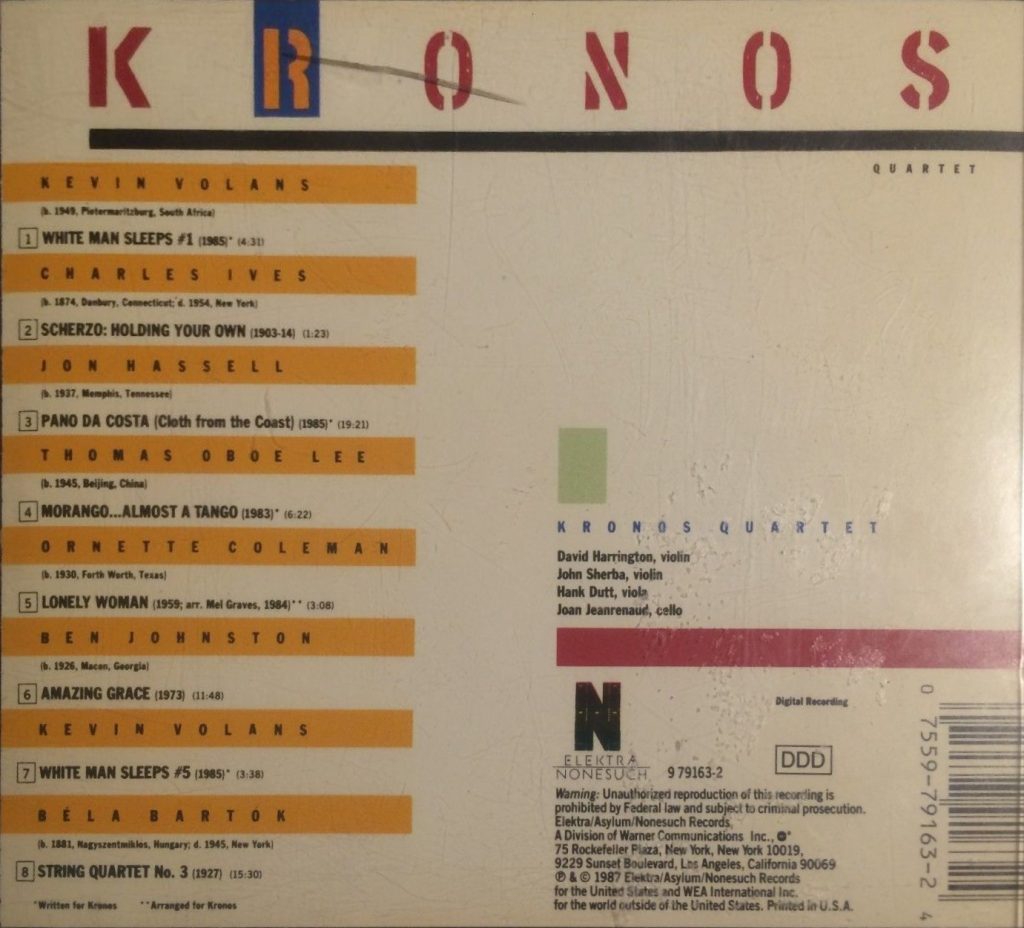 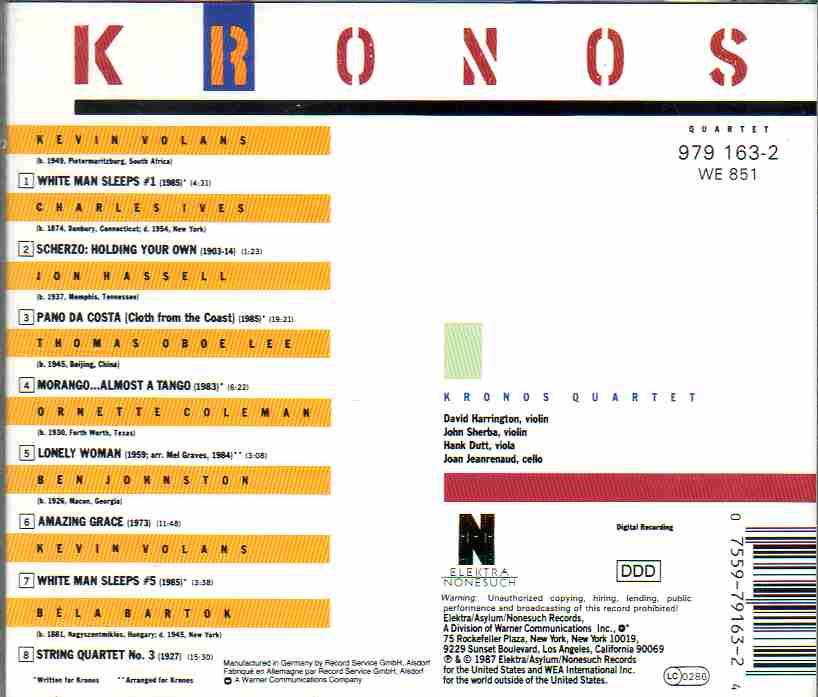 See entry on discogs.com for other editions

Let’s start with the carp: no liner notes (at least in my copy, which must date from when the disc was originally released, back in 1987). OK, sure, let the music speak for itself without any preconceived ideas (maybe that was the rationale behind this apparent stinginess), but still: after listening to the music, I would have liked to know more about the pieces and composers. For instance, I thought I remembered a Ben Johnston as one of the main proponents of micro-tonal music, but that did not seem to stick with the composer who apparently wrote an arrangement of “Amazing Grace”. Well, that’s the Ben Johnston alright, and “Amazing Grace” is not exactly an arrangement of the old Christian Hymn. That’s the way it starts, and Johnston makes it sound almost like Japanese music. It is sweet, not what you’d expect from a disciple of Harry Partch and a fervent advocate of “just intonation” systems. But after circa 4 minutes it grows more intricate and vehemently lyrical, with wonderful sonic invention, while retaining its great melodic appeal, and with some episodes also sounding much more “contemporary” (as the softly “buzzing” passage starting at 6:45). The micro-tonal Johnston can be recognized in the unusual and sensuous melodies, with some vaguely Gipsy- or Oriental-sounding flourishes. Makes me want to catch up with the music of Johnston and especially his other String Quartets on three New World Records CDs, 80637 barcode 093228063728, 80693 barcode 093228069324, and 80730 barcode 093228073024

Jon Hassells’s “Pano da Costa” (“Cloth from the Coast”, title unexplained) is also a very fine work (and, at 19:21, the longest on the CD) and I had never heard of the composer. After an opening of great tonal subtlety and mystery, full of pent-up menace, it develops tremendous energy and beat, to the point of fury, alongside moments of contemplation and meditation, in a style that pays tribute both to World music (the moments of repose unfold bluesy melodies that could be Gipsy – the 3rd violin sonata of Enescu comes to mind – but are probably inspired by Indian raga) and to repetitive music but is never trite harmonically and always inventive in tone color. Thanks to the people’s processed free on-line encyclopedia, now I know that Hassell, born March 22, 1937, is an American trumpet player (a member of the ensemble that made the premiere recording of Riley’s seminal In C in 1968) and composer, known for his influence in the world music scene (like Riley he studied North Indian Raga with Pandit Pran Nath) and his unusual electronic manipulation of the trumpet sound. As with Johnston, his quartet makes me want to hear more of his music (as if I didn’t have enough of a backlog of things to hear already).

The arrangement (by Mel Graves, written for Kronos) of Ornette Coleman’s Lonely Woman has a furious energy that makes it closer to Jimmy Hendrix than Jazz, with wild slides that seem to evoke the electric guitar as much as the saxophone. Thomas Oboe Lee’s “Morango… almost a Tango” indeed starts like a slow and sad tango, but then becomes more vehemently lyrical with more flourishes given to the first violin. It is very typical of the kind of crossover music Kronos has become a champion of. I have anothe recording, by the Lydian Quartet on MCA / Arts & Electronics.

“White Man Sleeps” was published in 1987 and was one of the first CDs of Kronos with Elektra/Nonesuch, after their recording of the soundtrack of Glass’ Mishima and of a collection with works of Sculthorpe (8th Quartet), Sallinen, Glass (“Company”), Nancarrow (1st Quartet) and and arrangement of Hendrix’ Purple Haze. It is the later Kronos disc “Pieces of Africa”, published in 1992 (Elektra Nonesuch 9 79275-2), that sent me back to this one. That later disc features the complete (five movements) “White Man Sleeps”, the first String Quartet of Kevin Volans, written for Kronos. Why they played only two movements of the piece that gives its title to the earlier CD eludes me. Anyway, the omission is repaired in the later CD. It is a superb piece, although Volans wrote two even more beautiful string quartets for Kronos, “Hunting : Gathering” (No. 2) and “The Songlines” (No. 3) – why the ensemble recorded only the second, on the short-timed Elektra Nonesuch 9 79253-2, also eludes me. For the two, go to the Balanescu Quartet on Argo 440 687-2, a splendid recording.

I’ll withold comments on the short Ives Scherzo and Bartók’s 3rd Quartet. They don’t need me to be recognized masterpieces, and I haven’t done any comparative listening to allow me to assess the interpretive merits of Kronos. They are comparatively more difficult for the unprepared listener than the rest of the program – that’s the way twentieth-century music evolved. Anyway the disc’s appeal comes mainly from its discoveries – Hassell and Johnston foremost.