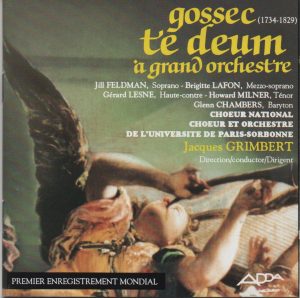 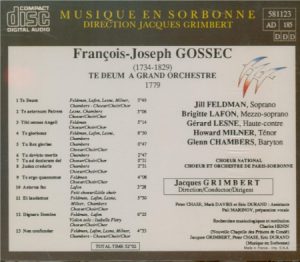 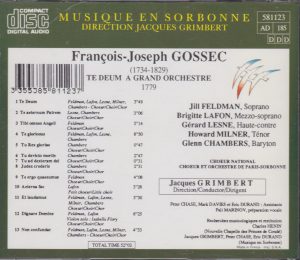 I would have easily welcomed twenty more minutes, and two other sopranos
Originally posted on Amazon.com, 7 September 2011

Not that I have any memories of the actual event, but I still have the program leaflet to remind me that I attended the live concert that was given at the Sorbonne, March 18, 1989, a few days or weeks after the work was recorded (February 1989 says the CD booklet, with two different soloists: haute contre Gérard Lesne and tenor Howard Milner made the recording but not the concert). 1988 and 1989 were good years for Gossec, thanks to the celebration of the bicentennial of the French Revolution. Erato published a reference recording of his great and groundbreaking 1760 Requiem in 1988 (it was recorded in April ’86), under Louis Devos , first CD edition ECD 75359 (see my extensive review), and his “Dernière Messe des Vivants”/”Last Mass of the Living”, his ultimate choral work, composed in 1813 – whose title may be an ironic (or desperate) reference to the early “Mass for the Dead”/Requiem – got what purported to be its world premiere performance, on April 23 1988, in Chantilly near Paris, under Dominique Rouits, and was subsequently recorded, in December 1989, for Koch-Schwann, CD 313 078 H1 (barcode 9002723130782).

Unfortunately, that spurting of events did not herald a longlasting revival of Gossec. As for the choral works, other than a spate of later recordings of the Requiem, on Capriccio 10 616 by Frieder Schernus (actually recorded in 1980 but released only in 1992), Naxos 8.554750-51 under Diego Fasolis (2001) , and K617 under Jean-Claude Malgoire, K617152, barcode 3383510001529 (2003), and a motet, “Terribilis est locus iste” again by Jean-Claude Malgoire on K617 (in “Grands Motets pour Louis XVI”, with works of Grétry and Giroust, 2005, K617181, barcode 3383510001819) nothing was added. A little more than a handful of discs of his symphonies came out, on Chandos (Matthias Bamert), Capriccio (Concerto Köln), ASV (Stefan Sanderling), Ricercar (Guy Van Waas) and in various collections, but nothing like a comprehensive, complete recording. A biography came out in 2000 in French, “François-Joseph Gossec, 1734-1829 : un musicien à Paris, de l’Ancien Régime à Charles X”, ISNB-13 978-2738496782, by Claude Role, the musicologist most active with his colleague Charles Hénin in the research on and rediscovery of Gossec (hence the RH calalog number of Gossec’s works, for Role-Hénin). In fact it was Charles Hénin who was the mastermind behind the revival of both the Te Deum and the Dernière Messe des Vivants.

The “Te Deum” (the complete sentence is in fact “Te Deum Laudamus”, “God, we praise Thee”) was the Mass performed to celebrate festal occasions and glorious events, military victories, royal crownings or healings and the likes (the Pope had one celebrated on the occasion of the Saint-Barthelemy massacre, when the Catholics mass-murdered the Protestants of Paris, in 1572. These guys sure had a sense of the occasion). Te Deums did not always have auspicious results, though: it is while he was conducting his own, in 1677, that Lully inflicted upon his toe the fatal cane blow that would cause gangrena to propagate and kill him… Given the number of such occasions, an enormous number of Te Deums were composed and performed under the three last Louis of the Ancient Régime. We are not told on what occasion Gossec’s Te Deum was composed and performed, only that it had its premiere on June 3, 1779 at Notre Dame. A search on the Internet yielded that the occasion was the birth of Marie-Thérèse Charlotte, daughter and first child of Louis the 16th and Marie Antoinette.

In the text he contributed for the concert and that is reproduced in the liner notes, conductor Jacques Grimbert feels the need to disparage Gossec’s Requiem in order to promote the Te Deum. Quote (my translation): “of Gossec’s output, only a few works were known until now, “Missa defunctis” [that’s the Requiem], “Symphonie à 17 parties” or “Dernière Messe des  Vivants” [that one sure hadn’t been know for very long, since it had been premiered only the year before Grimbert wrote this]. Those works, as interesting as they are, weren’t enough to establish the composer among the greatest of his contemporaries. Not so with his “Te Deum”, a composition of much greater craftsmanship [the meaning of the liner notes, “d’une toute autre lecture”, is incomprehensible here, even in French. Referring to the concert program shows that it is in fact a typo. The original was “d’une toute autre facture”] and importance.”

That’s gratuitous hype. The “Te Deum” is a fine piece, with a few striking moments even, but it doesn’t approach the impact, originality and invention of the Requiem. Even the most striking of these moments ,the “Judex crederis” – “We believe that thou shalt come to be our Judge” – with its antiphonal fanfares and thundering timpani, track 8, is directly imitated from the Requiem’s Tuba mirum. In turn, it is clear where Berlioz’ inspiration for his own Requiem came from.

Grimbert says that he’s had to substantially revise and reorchestrate the score. He is quite ambiguous as to whether he worked after Gossec’s own manuscript or only a contemporary manuscript copy (“the copy we were given as well as the manuscript we consulted”), and you need to go to his last paragraph to clarify that the only source is a manuscript copy now held by the Bibliothèque Nationale de France that is not in Gossec’s hand. Anyway, consulting the manuscript, he says he found numerous “omissions”, “weaknesses” and “inconsistencies” which he attributes both to Gossec’s haste in providing the music, and his lack of attention to his copyists’ work. Says Grimbert, “we often had to rewrite deficient viola parts, correct melodic errors, revise the harmonic background, re-establish the balance of the polyphony, secure the base line which was sometimes misplaced by one or more bars, check rhythms and finally restore the prosodical order and insure thematic coherence, especially in the two great fugues”. Woof! One wonders what’s left of Gossec in that process, and what gave Grimbert, despite all these weaknesses, the impression that in the Te Deum were “united what had only been found scattered in the other vocal works of Gossec, the splendor, the vocal magnificence, the melodic invention, the irresistible sweep, the continued lyricism of the musical flux” (same untranslated paragraph). The booklet nicely reproduces two examples of such revisions, one involving the bass line and one the prosody (the way the syllables fall on the notes).

The Te Deum is richly scored (large orchestra including clarinets and trombones, five soloists, singing individually or making up the “small chorus” opposed to the “large chorus”), has its suitably grandiose and/or triumphant moments (as the introductory Te Deum or that Judex credevi), its mighty choral fugues with “concertino” ensemble of soloists dialoguing with he choral “ripieno” (“Et laudamus”, track 11, and the finale track 13), its beautifully brooding moments (“Te ergo quaesumus”, “We therefore pray thee, help thy servants, Whom thou hast redeemed with thy precious blood”, wrongly tracked on the CD: it starts at 1:30 in the Judex credevi, track 8), its fine arias  (often with chorus), written predominantly for soprano (tracks 3 and 9, and add the duet for two sopranos, track 12) and for baritone (tracks 2, 4, 8), and fine ensembles (track 4, “Te gloriosous”, is a very extended one and lasts 8:30) – and they are often accompanied by gamboling woodwind filigree (tracks 3, 4, 10, also in the final fugue track 13). But as enjoyable as these arias and ensembles are, I find them rarely as strikingly unique and catching as those of the Requiem; there are some nice orchestral touches in the aria for baritone and chorus “Te aeternum Patrem”, track 2, and wonderful concertante violin and clarinet in the orchestral introduction to the “Dignare dominum” duet, track 12. But don’t quite expect here a revelation of equal stature as the Requiem, or Mozart’s C-major Mass, or Haydn’s Nelson-Mass. But an excellent and enjoyable specimen of late 18th Century vocal/choral music is good enough.

Hard to judge Grimbert’s conducting in the absence of an alternative version. His tempo in the “allegretto” track 4 seemed a tad slow compared to the way period-instrument ensembles like Concerto Köln now perform an allegretto, but it didn’t hamper enjoyment. I don’t know what exactly is the “Orchestra of the University of Paris-Sorbonne”, but they sound like professional instrumentalists to me, not students.

Unfortunately soprano Jill Feldman is the one major flaw of this recording – compounded by Gossec’s very scoring, which places her in prominent position not only in her arias, but in the ensembles as well. In itself the voice is pretty and she doesn’t actually shriek, but her vibrato-less emission seems to lacks support and sounds almost constantly slightly off-pitch, making it not so pleasurable to hear. Frankly, she sounds here like an unexperimented student in singing. Feldman had until then worked mainly with Christie’s chamber-sized Arts Florissants, and, I don’t know, maybe she simply didn’t have the kind of technique necessary to produce those decibels above the Te Deum’s large orchestra. Mezzo (more a soprano II, really) Brigitte Lafon is no better in her solo aria, “Aeterne fac” (track 10), and even painful on her high note at 1:23. At least the two are well-matched, so to speak, in their duet, track 12 (Lafon better than Feldman). Too bad.

Another more minor problem is with “haute-contre” (alto) Gérard Lesne. The CD track listing credits him as a co-soloist in the “Te aeternum Patrem”  (track 2), and I simply DO NOT hear him there. He does appear sonically, though, at 2:15 in the ensuing ensemble, track 4, and in the fugue with ensemble, track 11. Tenor Howard Milner could have stayed home, for what you hear of him in the ensembles (and, as Lesne, he did on the day of the concert!).

Despite those weaknesses, the best tribute I can give to Gossec’s Te Deum is that, at 52 minutes, it seemed too short. I would have happily welcomed twenty more (and two other sopranos).