I’m back, and we’ll see how long that lasts (I’ve announced so many times that I was back for good to resume my activities of reviewing and discographying, only to be swallowed up by other chores, that I think it’s best to shut up with great proclamations now), with a new review of a mystery Swingle Singers album, from 1990, and the continuation (Part II of III) of my Swingle Singers discography.

In fact – since I have not quit my activities of a compulsive buyer of CDs – I chanced on a Swingle Singers CD from 2015 that I hadn’t been aware of: 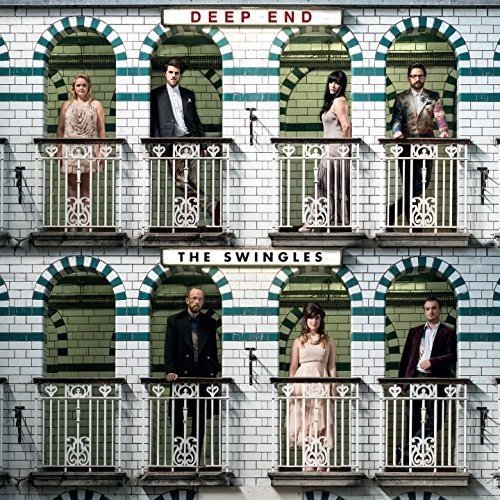 “Deep End”, on the ensemble’s label, SWINGCD25 (2015), barcode 5037300796666. Normal, my great flurry of Swingle Singers listening and reviewing had been in the early 2010s, and that had led to many reviews posted on Amazon.com (including some of LPs never reissued to CD) and to a number of “Listmanias” which served, to the extent made possible by this “community” feature that Amazon once offered, as an online discography of the Swingle Singers. Well, that lasted until the day Amazon decided that profits were more important to them than communities – and that the two were contradictory – and suppressed overnight all the listmanias.

But that wrong led to a good, and back in 2018 I started reposting my reviews over here, and started a fully-fledged chronological and critical discography, much more complete than what the Listmanias and other Amazon features ever allowed.  I posted Part I of the discography, documenting the French Swingle Singers, in activity from 1962 to 1973. I also drafted Parts II and III, which would have documented the English Swingles, from 1973 to present… and, absorbed in other chores, left it all that time on ice.

So that 2015 CD brought me back to the Swingle Singers and the dormant discography, which I started cleaning up and updating, and I published Part II, 1974-1984, a neat and clean 10-year period, at the end of which founder Ward Swingle stepped out as a singer; from then on he acted as musical adviser and arranger.

In fact Part II of the discography required very little work, the draft I had left in 2018 was in near-publishable form. It’ll take longer with Part III, because there is work required to document and review the many CDs published during that longest period (almost 30 years!) of the Swingle Singers’ existence. 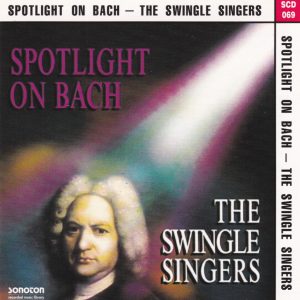 But, researching for Part III, again I chanced on an album from 1990 which, when I first busied myself in the early 2010s with the Swingle Singers’ discography, neither I nor Swingle Singers discographer and biographer Thomas Cunniffe on Jazzhistoryonline.com had been aware of – meaning that neither had Wikipedia, Amazon or Discogs.com: “Spotlight on Bach“, published by the hitherto unknown to me label Sonoton from Germany. Now the disc is documented on Discogs.com – and this is truly serendipitous, as apparently the listing was submitted on February 1 or 2, a mere two weeks before I looked…. The LP edition had been submitted “over three years ago”, and there’s an entry for the LP on the European Amazons, ASIN B003B6VTTQ (but I haven’t found any for the CD; the fact that it doesn’t have a barcode makes it difficult if not impossible to list on Amazon). Its contents are available online as downloads, and the Swingle Singers’ discography on Wikipedia now references, however uninformatively, those dowload editions. Finally… I was lucky enough to find the CD online for sufficiently cheap (there is currently a copy on sale on Discogs, for anyone interested).

And what a bizarre, bizarre album! Since it was published in 1990, same years as the Swingle Singers “The Bach Album“, released on their own label, Swing CD 5, and shares a number of tracks with it (but also omits six from that album), is was tempting to thing that it was, at least partially, another edition of it. But not so simple.

Already, there had been an issue with The Bach Album in relation to the one published by Virgin Classics in 1994 under the title “Bach Hits Back“, which reprised all its contents and added five new tracks. Bach in the early 2010s Cunniffe and myself spent lots of head-scratching time trying to figure out if the Virgin album was simply an augmented reissue of The Bach Album, or new recordings. When I was finally able to find a copy of The Bach Album to compare, it turned out that the question didn’t lend itself to an easy, binary answer “yes” or “no”. Apparently “Bach Hits Back” was different recordings, since tempos usually differed, and they were all sung “a capella” (as became the wont of the ensemble in the early 1990s) where The Bach Album usually had underpinnings of drums and double-bass (as had been the custom established from the start by Ward Swingle with his Paris ensemble).

But closer examination in fact revealed that many tracks were indeed the same recordings, but that tempos had been electronically fiddle with to give the illusion of different recordings, and that, in The Bach Album, the drum-double-bass underpinning had been overdubbed to the a capella vocals later used by Virgin. See the review of The Bach Album for the details on this.

So, back to Sonoton, again it appears that most of the common tracks (save, judging by ear, two) are the same recordings as on The Bach Album, but with different mixings (usually more reverb’) and different drum & double-bass accompaniments.

Does that make Sonoton a “fake” of The Bach Album, or rather, both Sonoton and The Bach Album, fakes of Virgin’s later and entirely a capella “Bach Hits Back”, which one may conjecture are the “original” and “bare” recordings, to which perc’ and bass were overdubbed in the two others?

I thing not. Especially in pop music but not only, an album is not the reproduction, imitation or memento of a live concert, it is an autonomous artefact. You don’t buy, say, Sargent Pepper or The White Album to be the documentation of a concert given on a London rooftop – they are sonic objects in themselves. So I think “The Bach Album” and “Bach Hits Back” are two independant sonic objects, two different Swingle Singers’ variations on Bach, so to speak.

Not so clear with the Sonoton album, because its arrangements and “fiddlings” don’t change or add all that much to their twin tracks in The Bach Album. When a different percussion underpinning, it’s really almost imperceptible.

That said, there is more in “Spotlight on Bach” than on The Bach Album, and that “more” makes it truly outlandish.

First, in many of the pieces, Sonoton offers multiple versions, eg different “fiddlings” with the original source (whatever those may be): with drums and double-bass, with double-bass but without drums, with organ or without or even organ alone, or a capella; slow or faster…

Then, talk about “Spotlight on Bach“! The album also features Beethoven’s Ode to Joy (four versions! A capella gentle, forceful with loud pop drums, the a capella version of the previous and the organ accompanimens of it!) and the first movement from Vivaldi’s Autumn – pieces not otherwise represented in the Swingle Singers discography.

And finally, as if all that wasn’t outlandish enough, the disc ends with 25 tracks featuring 59-second and 29-second versions of the previous tracks! Who is this for? Advertisement companies? “You need a 29-second serving of Beethoven’s Ode to Joy with pop drums to sell spaghetti? You got it!”

Strange label, this Sonoton… From Germany, no barcode. The booklet’s last page lists some of the label’s other publications, and apparently they were specialized in transcriptions of the great Classical hits. Try samples of their Debussy CD on SCD 047. Very thorough discographic info on the label’s suprisingly abundant catalog, here.

To me, as a Swingle Singers completist, the value of the CD stems from the material not otherwise available in The Swingle Singers discography: Ode to Joy (but the “forceful with loud pop drums” version would have delighted Clockwork Orange’s Brian DeLarge….), Vivaldi’s Autumn, the hummed version of Bach’s “Es ist genug” (I thing it moves me because it reminds me of the Finale of Berg’s Violin Concerto), to which I’ll add the a capella version of “In Dulci Jubilo” (for once, not the same recording as the one on Virgin Classics).

Still, this one is really for the die-hard Swingle completist… If you want to hear Bach by the Swingles (and you should), better go to Virgin Classics’ “Bach Hits Back” – because it is much more easily available than both Sonoton’s “Spotlight…” and “The Bach Album”, because it offers five additional tracks to The Bach Album and because, last but not least, it is sung entirely a capella. And don’t forget, of course, the Paris Swingle Singers Jazz Sebastian Bach vols. 1 & 2.

See my review for more details. I’ve also reposted a number of reviews of Swingle Singers albums from the late 1980s and early 1990s, and, if interested, pending the publication of the discography’s Part III with direct links, just type Swingle Singers in the search engine and they’ll show up in reverse order of reposting.