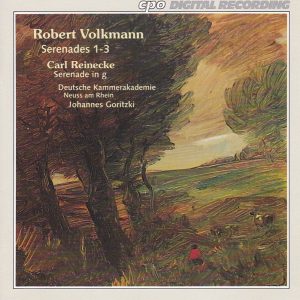 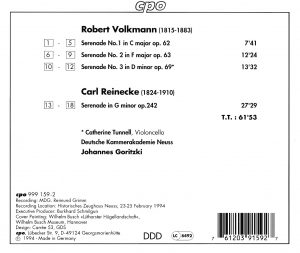 The music of Robert Volkmann (1815-1883) was a chance discovery for me, made through the Cpo companion set with the two symphonies and cello concerto, and one that I found sufficiently appealing to want to explore more. In my review of Volkmann’s symphonies I asked the question “what is it that makes a composer a ‘minor’ one?” And the answer to that question was: “not much, in fact”. Volkmann’s symphonies were composed respectively in 1863 and 1865, which places them more than 20 years after the first ones of Schumann and more than ten years after the “Rhenish”, but more than ten years before those of Brahms. Sure, there was much in Volkmann’s symphonies that reminded of Schumann and a few traits that announced Brahms, but (as I wrote in my review), “I find Volkmann’s symphonies (and concerto) not inferior to Schumann’s and Mendelssohn’s, although they may not have the melodic distinctiveness of the latter. Maybe if I listened to Schumann’s and Mendelssohn’s symphonies immediately after Volkmann’s their superiority would sound obvious, but when I am listening to Volkmann I hear nothing to explain their popularity and his neglect.”

Volkmann’s three Serenades, composed in 1869/70, are products of his maturity (in fact, they are among his last substantial compositions) and they illustrate a genre that we associate more with Mozart and the classical era, but that was still in vogue way into the late 19th century (witness Brahms’ two, Dvorak’s and Tchaikovsky’s, and even Wagner’s Siegfried-Idyll, which is a Serenade in all but name), although mostly with “minor masters”, as were Volkmann and Reinecke. Like Dvorak’s op. 22 and Tchaikovsky’s and unlike Brahms’ and Wagner’s, many of those Serenades, including those of Volkmann and Reinecke, limited themselves to string orchestra.

Volkmann’s 2nd Serenade is a charming, unpretentious work (Volkmann described his Serenades as “modest”, “harmless little pieces”, and he was right), with a subtlety, softness and tenderness in the first movement that almost approach some inspirations of Brahms (think of an orchestration for strings of some of the late intermezzos for piano), and a lovable spirit of dance and merriment in its three following movements (the third is a waltz), with the second especially a country dance with syncopated bass and the finale a merry march, both evocative of Dvorak.

The third Serenade is also quite affecting for being a quasi Concerto for cello and strings – quasi but not quite a concerto, which is part of its interest: the cello does assume a solo role, but it is more to utter a beautiful, plangent song (and Catherine Tunnell plays it marvelously) than to assume a true dialogue with the string ensemble, and long passages (specifically, the charming “Allegro non tanto” section which opens at 0:30 into track 11) are played only by the strings. The first, and shortest Serenade is more bland, its modicum of interest deriving mainly from the Bach-reminiscent march rhythm of is outer movements and, again, the Dvorak-like merry spirit of its middle movement.

Running 27:30, Reinecke’s Serenade isn’t just a filler. In fact, in is more substantial in length than Volkmann’s three short works (7:40, 12:20 and 13:30). Carl Reinecke (1824-1910) was another one of those minor German masters (the city where he was born, Altona, was under Danish rule at the time). A student of Mendelssohn, Schumann and Liszt, his compositional outlook seems to have stopped there, although, like Bruch, he lived sufficiently long to witness some of the dramatic upheavals of the new music era. The Serenade is also a late work, composed in 1895. Like Volkmann’s first, I find it charming, but fairly bland. Points that stand out are the second movement Arioso with its faint echoes of Wagner’s Siegfried Idyll, and the affecting 4th movement cavatina, like Volkmann’s Third, with concertante solo cello (Catherine Tunnell isn’t credited here, but presumably she is playing as well).

The scores are available on download from the International Music Scores Library Project (Volkmann here and Reinecke here), although the first Serenade of Volkmann only in the form of a two-piano reduction. Goritzki takes no repeats, which is fine – better thirst for more than risk being bored by too much – but also makes a cut of 25 measures at 1:14 in the 2nd movement of Volkmann’s 2nd Serenade, for which I see no justification since, with at TT of 61 minutes, there was plenty of space left on the disc. At least it is expertly done and you won’t hear it without a score. Goritzki and the so-called Deutsche Kammerakademie (German Chamber Academy) Neuss am Rhein (that’s a city in North Rhine-Westphalia) play well, with the desired transparency of texture that lets you clearly hear all the voices. Only do I find the “un  poco più lento” section of Volkmann’s 1st Serenade (track 2) too held back (it should be only UN POCO più lento, right?), sentimentalizing the music more than it should, and in Reinecke’s Serenade the tempo of the penultimate Fughetta giojosa seems a bit too cautious for its “vivo” marking.

Excellent liner notes, especially perceptive on the history and meaning of the Serenade. Although the companion set with the symphonies and concerto must remain the first introduction to Volkmann, this complementary disc offers modest indeed, but genuine pleasures.