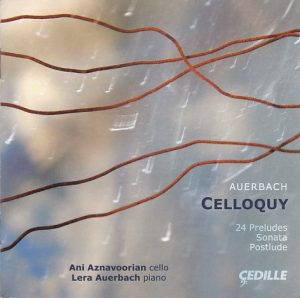 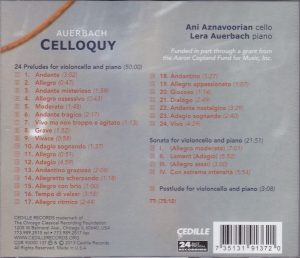 A trajectory from post-Shostakovich to more radicalism – what comes next?
Originally posted on Amazon.com, 31 July 2016

Though recorded ten years later, this recording is a logical sequel to Auerbach’s 24 Preludes for Violin & Piano on BIS, and really, I can copy and paste what I wrote under that disc, just switching pieces: “Composed in 1999 when Auerbach was 25, alongside similar cycles for [Violin & Piano] and solo Piano, the 24 Preludes for [Cello and Piano] seek to re-explore, in her own words, ‘the value and expressive possibilities of all the major and minor tonalities’, ‘as valid at the beginning of the twenty-first century as it was during Bach’s time’”. The liner notes don’t tell you but the Cello Preludes are Auerbach’s opus 47, and those for Violin were Opus 46 (the Piano Preludes are opus 41). As the Preludes for Violin and Piano, those for Cello and Piano are short, from 0:43 (No 4) to 5:00 (12); as in its companion cycle, the final piece in the form of a coda is also more extended than most of the other Preludes (4:35). I called the Preludes for Violin & Piano “a strange hodge-podge of styles, with Shostakovich looming large” and it’s no surprise that the same is in evidence here, tp which I’ll add reminiscences (for the listener, not necessarily the composer) of Shostakovich’s maverick student Galina Ustvolskaya. As the liner notes put it, the Preludes combine “intense lyricism with fierce sonic clashes”, atmospheres are mostly grim and gloomy (1, 6 “Andante tragico”, 21), occasionally mysterious and filled with pent-up menace and cello harmonics (3 “Andante misterioso”, 7), many Preludes are violent, raging and sardonic dances (2, 4 “Allegro Ossessivo”, 9, 11, 14, 15, 16, 17, 20, 24), with obdurately pounding piano (5, 8, 11) sometimes with depressed sustaining pedal to heighten resonance (5, 9). Playing is virtuosic both for cellist and pianist (both performers are impressive and that includes, of course, Auerbach in her capacity as pianist, but Miss Aznavoorian, a name new to me, is obviously a cellist to follow) and acoustic space is often saturated, and nowhere more so than in No. 19; this is the opposite of lean minimalism, the writing is very “busy”.

Although the music, because of its often very pounding nature, may be difficult to take for listeners adverse to contemporary music, the writing isn’t avant-garde cutting-edge, and that is in a way the limit of the pieces. There’s nothing truly innovative or original therein. The liner notes say that “the score contains an abundance of unusual sonorities and extended techniques”, but they remains very much into the norm, snarling sul ponticello (12, 16), harmonics and glissandi (15, 19, 22). Auerbach doesn’t shun either the big romantic expression (5, 7, 8, 12), sometimes the dreamy atmosphere (10 & 23, both titled Adagio sognando, 22 Andante nostalgico) pulling the music, I find, in the direction of film music. Some Preludes evoke Bach suites (13 Andantino grazioso) or Schubertian Tangos (18).

The last of the Preludes seemed to go stylistically further, both in its unleashed pounding rage, which left less space for lyrical and romantically-bound melody to unfold, and in the greater elaboration of its architecture. The trend is confirmed by the Sonata for Cello and Piano from 2002 (liner notes don’t tell you, but they are opus 69), where much of the atmospheres and stylistic influences of the Preludes can be heard, but with more architectural complexity, more radicalism and less compromise and reliance of old romantic or film-music gestures. Makes me curious of how she evolved since.

Postlude, from 2006, is one of those brooding “film-music” type of music – and one is not surprised to read that it is in fact an adaptation of Prelude 12 – the only innovative aspect being the use of a prepared piano distorting the sound and added cello glissando to the lowest registers, the result being a “dirtied” sound. It doesn’t give much indication to the stylistic direction chosen by Auerbach since composing here Preludes and Sonata.

See my Auerbach introductory page for more info and resources on this composer.