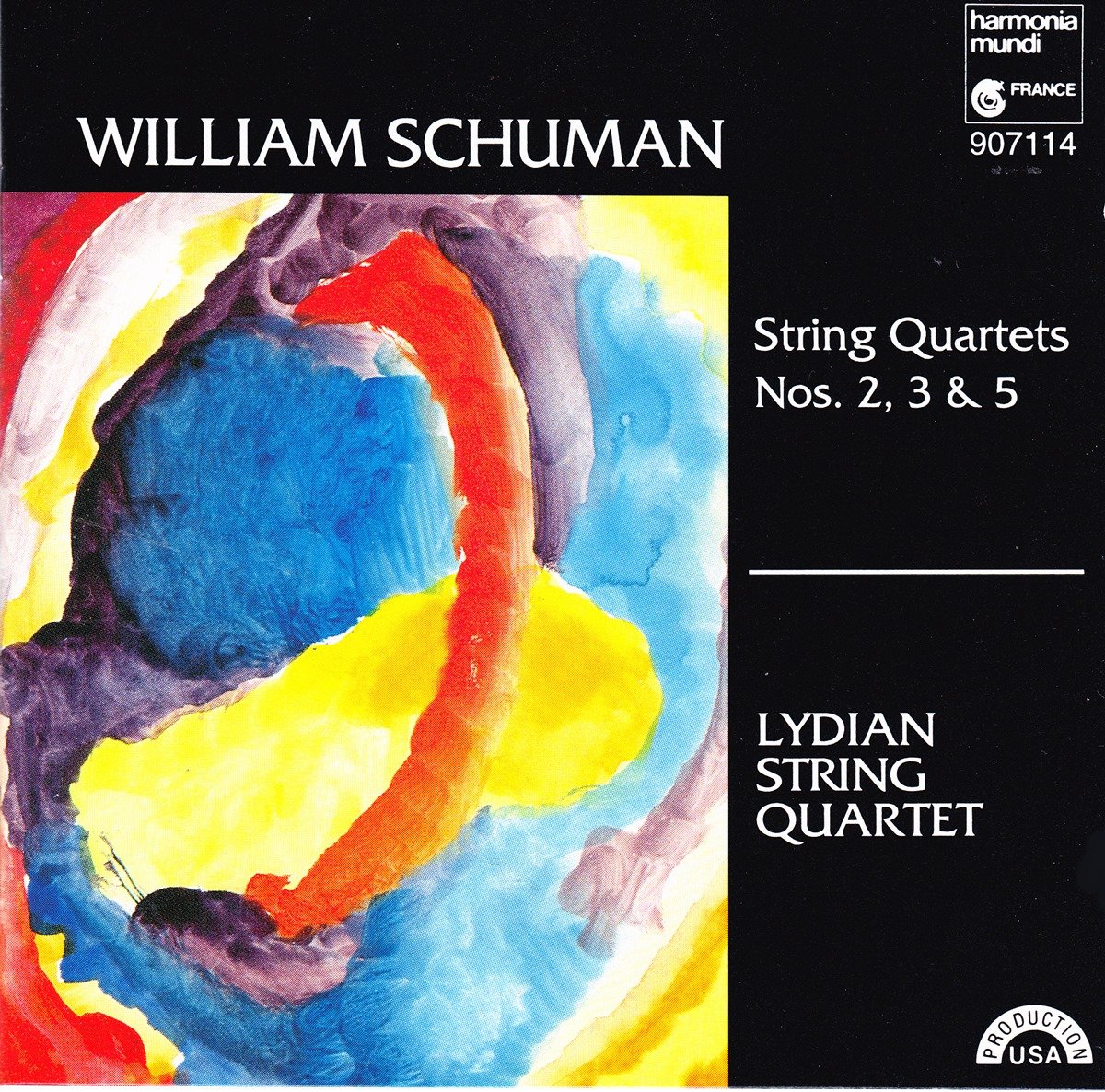 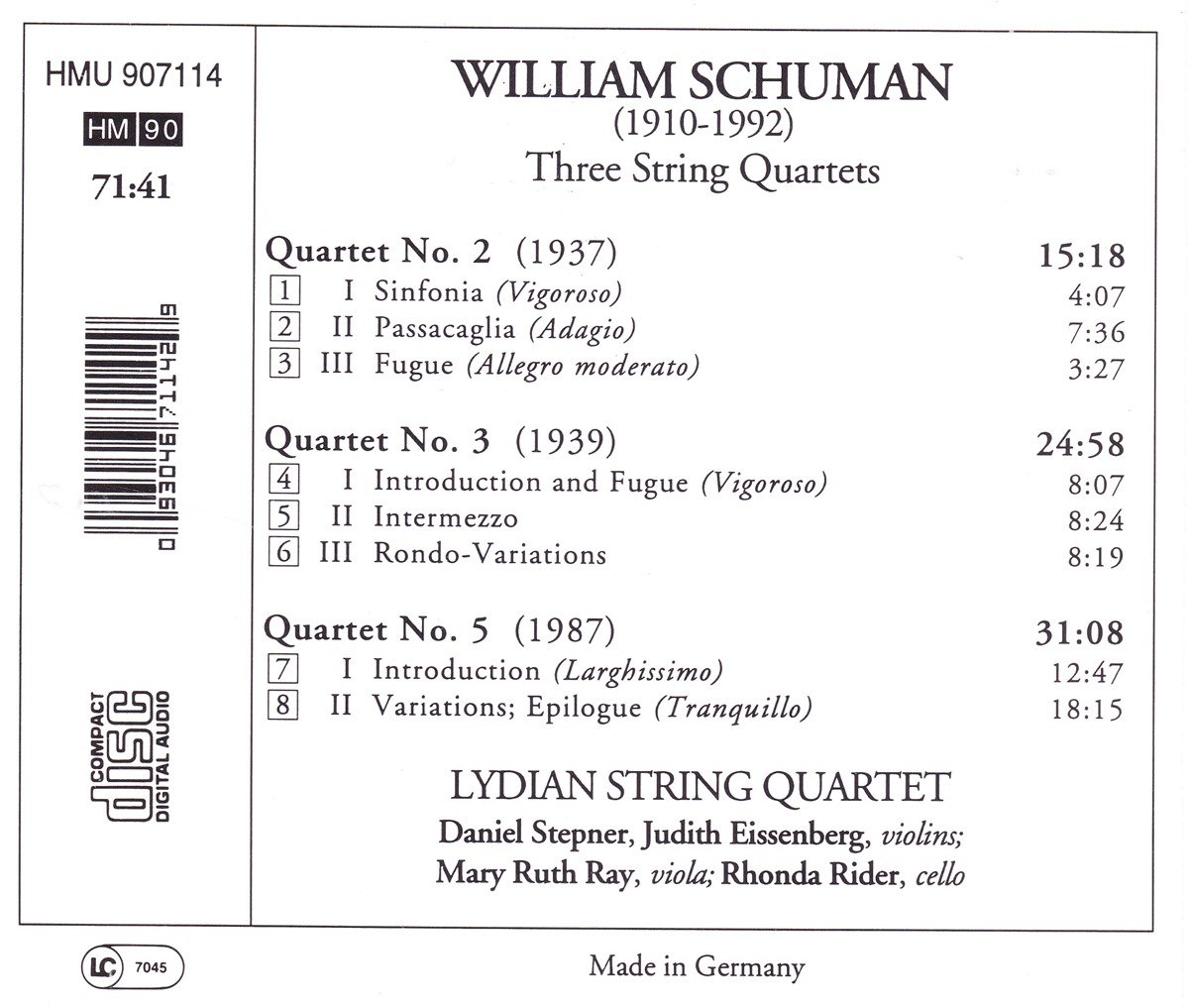 William Schuman needs to be recognized as a major 20th Century composer of String Quartets
Originally posted on Amazon.com, 17 January 2009

What does it say about the situation of the recording industry and the attitude of the music public, that the complete String Quartets of William Schuman have NOT yet been recorded as a complete set, and that one of them should be unavailable on CD? I wouldn’t say that it is lack of risk-taking: the CD era brought forth a phenomenal amount of off-the-beaten track repertoire, the symphonies of Schuman are represented on disc – they would represent certainly a greater financial output and risk than the String Quartets. So what accounts for this absence? Is Schuman now so sadly out of the picture that no producer, no Naxos, no New World or you name `em will even have the idea of doing the entire cycle?

Anyway, let us rejoince to have this partial recording, made in 1992, with Quartets # 2, 3 and 5 by the Lydian Quartet, which goes one step in filling the bleeding gap. Hearing those three magnificent compositions makes one even more appalled by the absence of the 4th (composed in 1950); to the best of my knowledge it has never been re-recorded since the early recording by the Juilliard Quartet in 1952, on Columbia Masterworks’ Modern American Music Series, ML 4493

(see entry on Discogs.com) which cries for CD reissue (the composer withdrew his first). The 2nd and 3rd were written in close succession (1937 and 1939) and share a common style, although the 3rd is more masterly in its architecture and accomplished in its emotional depth. They are filled with moments of radiant lyricism and overwhelming beauty. There are moments of sweeping energy, especially in the 3rd Quartet, moments of brooding intensity (in the slow movements, and in the introduction to the 3rd Quartet’s first movement). There is a unique Schuman “sound”, with lush and sensuous harmonies, and although I am aware that I am contradicting myself, it does bring to mind Britten and Harris.

The 5th Quartet is a much later work: it was composed in 1987 and it is even more extraordinary in its freedom and whimsicality of form and expression and its counfounding beauty, with elegiac and gently plaintive melismatas over mysterious and mesmerizing harmonies (the long cello cantilena at 7:20 over which violins add their ironically high-pitched and blablative commentaries is particularly ear-catching). Again the name of Britten comes to mind (and Britten’s three rank very high in my own pantheon): like the English composer, Schuman created a style that was entirely 20th Century while neither avant-garde nor (notwithstandingthe opinion of the avant-garde cronies of his days) backward-looking, a style that was beyond these concerns and disputes, and entirely his own. The Quartet is in two movements and the second is a series of variations on a simple Carol (17th-Century Dutch). The theme is given an original twist on its first presentation, typical of Schuman’s playful imagination, by having the violins play in their highest registers and quasi-“whistle” it on harmonics, making it sound diminutive, almost child-like. Schuman then states it “plain” and varies that material in ways that are always highly imaginative and unexpected – and mostly brooding.

The 3rd Quartet is the most recorded of Schuman’s output in the genre. The Lydian are slightly less dynamic but have definitely more tonal lustre than the more than serviceable Kohon Quartet (which comes in a valuable 2-CD VoxBox set devoted to “American String Quartets 1900-1950”, CDX 5090, link will open new tab to my review), and they are definitely less high-strung but more ample and lyrical than the

Juilliard Quartet (in dry 1958 mono sonics, reissued in 2005 by Testament on SBT 1374, barcode 749677137427, with Berg’s Lyric Suite and Elliott Carter’s Second String Quartet). The ideal version would be a mixture of the Lydian’s lyricism and tonal lustre and the Juilliards intensity (which might have been the Kohon’s with more tonal opulence and slightly more dynamism).