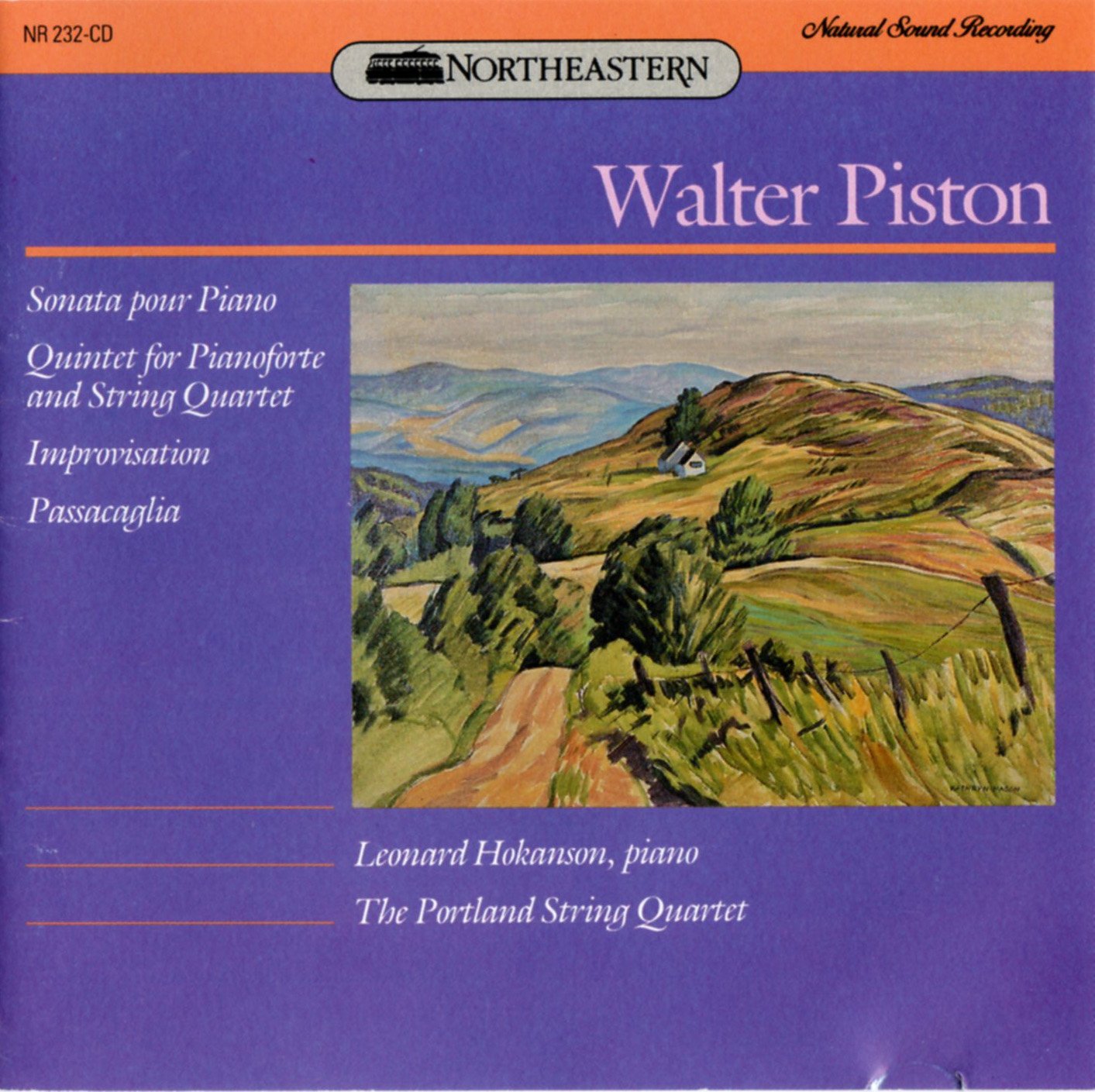 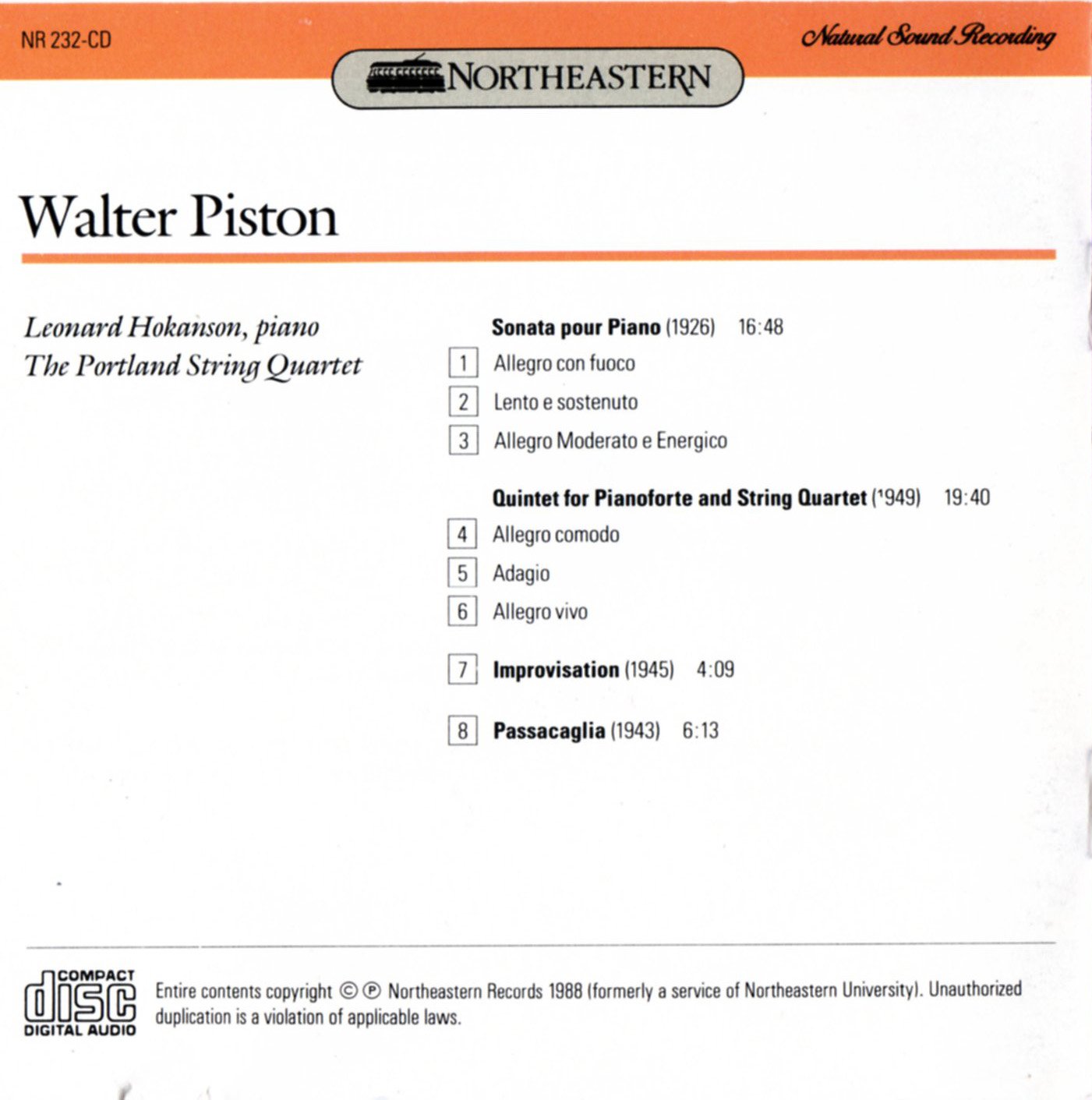 The (unpublished) Piano Sonata one of the American masterpieces in the genre written in the first half of the 20th Century
Originally posted on Amazon.com, 29 January 2009

Coming back to this Piston disc years after buying it (it was part of a series of three with the Portland Quartet’s traversal of Piston’s five String Quartets and Flute Quintet, see my reviews of Northeastern NR 9001 CD and NR 9002 CD), I found the Sonata so good that I immediately wanted to buy the score. I’ve been collecting the scores of the greatest American piano sonatas – Griffes, Copland, Barber, Carter, even Antheil (only the Airplane Sonata is easy to find), and I’ll include Bloch’s (small Italian publisher, that required some scouting) – and I thought this one would be an appropriate companion. I was then puzzled to see that a check on my usual Internet websites for scores yielded no results, which sent me back to the liner notes. There, I was amazed to see that the Sonata, composed in Paris in 1926 when Piston was completeing his studies with Nadia Boulanger, and one of his earliest compositions (and, re the liner notes, his only large work for solo piano), was at the time of the recording (1985/86), and obviously still is now, unpublished.

How can such a great work, one of the great American piano sonatas of the first half of the twentieth century and a composition on a par with all those mentioned above, be unpublished? The liner notes don’t tell the story: did Piston leave it in a drawer and forget about it, or did he actually dismiss it as unworthy?

The Sonata is motoric, propulsive and Bach-inspired in its outer movements, the first (at 5:31 it doesn’t contain a superfluous note) a toccata starting with a muscular and boucy single left-hand line played staccato, over which an angry, single-line right-hand theme develops, and the finale a superb and mighty fugue, again muscular and staccato and made of interlaced single-lines rather than being chordal, ending in furious pounding that nearly emulates the early sonatas of George Antheil. The central slow movement is an atmospheric meditation almost like an organ choral rising to epic grandeur, evocative at times of Copland or the dreamy atmospheres of Ives.

Piston’s Sonata didn’t entirely give me the impression that I hadn’t heard that kind of music before, although the models seemed German more than American or French. But then, when I tried to pin it down, it became very elusive. It sent me back to Eisler and Krenek, but that wasn’t it: Piston is more muscular, less whimsical. There is something of Hindemith’s lean textures and taste for counterpoint and fugues, but Hindemith sounds unmistakably like Hindemith, just as Stravinsky’s neo-classical Sonata and Serenade sound unmistakably Stravinskian, and there is no confusing Piston with them. I went as far out as to try Felix Petyrek (on EDA Edition Abseits 017-2, “Felix Petyrek: Piano Music, 1915-28”, link to my review), Ignace Strasfogel (on Decca’s Entartete Musik series, 455 359-2) or Sophie-Carmen Eckardt-Gramatté (by Marc-André Hamelin on Altarus AIR-CD-9052). French then? I pulled out of my shelves Roussel, Auric, Dukas – wide off the mark. I even tried Prokofiev – but Piston is much more sombre and Bach-like than the Russian composer. The fugal and contrapuntal aspect of Piston’s Sonata likens it vaguely to Shostakovich’s Fugues from his Preludes and Fugues op. 87, but the mood in Piston is more grim and muscular. How about the Americans, then? There is something of Griffes’ in the pounding fury, but Griffes is much more Romantic and Scriabinian. Not Antheil, whose later Sonatas sound like Prokofiev’s War Sonatas (“The Lost Sonatas” by Guy Livingston on Wergo WER 6661 2, barcode 4010228666120, see my review on Amazon.com pending repost here). Sessions’ three are much busier in their chordal and contrapuntal writing, and whimsical in their moods. Barber? A little bit in the fugue. Same with Carter in the fugual development of his Sonata’s second movement. And I mentioned Copland for the second movement: but save Griffes’, all these Sonatas, including Antheil’s, were composed circa 15 to 20 years after Piston’s. Again, Piston’s Sonata strikes me as one of the American masterpieces in the genre from the first half of the 20th Century. Incredible and saddening that the score of this magnificent work isn’t published, obviously badly limiting the recorded and live circulation it deserves.

The Piano Quintet from 1949 is pleasant but nowhere as individual. Its mood is more gentle and romantic (the liner notes rightly point to Brahms and Fauré), although it has passages with Piston’s typical bouncy, syncopated and muscular rhythms, including a lively finale. The slow movement is one of Piston’s typical brooding meditations, and again it is pleasant but contains nothing particularly memorable. The two piano pieces that complete the CD are also relatively late works (1943 and 1945) and are two short and stern works written in a terse, dissonant counterpoint. TT is a shortish 47:25 minutes, but the Piano Sonata alone makes the purchase of this disc worthwhile. 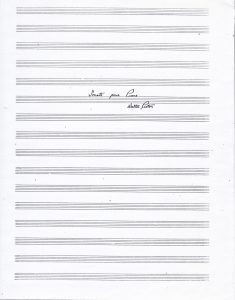 And a post-script from Feb 2009. I’m quite proud of the sleuthing job I’ve done, finding the e-mail adress of the disc’s producer, Mark DeVoto, and from there, ultimately being re-directed to the Houghton Library at Harvard. The manuscript of Piston’s Sonata is contained in a collection titled “Boulanger, Nadia, collector. American music scores (MS Mus 245): Guide” and a photocopy can be ordered from Harvard’s Imaging Services, for less than… [oops! turns out that Big Brother has censored the figure: anyway, it is equal to the number of your fingers] and double that for fedexing it. This is now one of the treasures of my collection of piano scores.