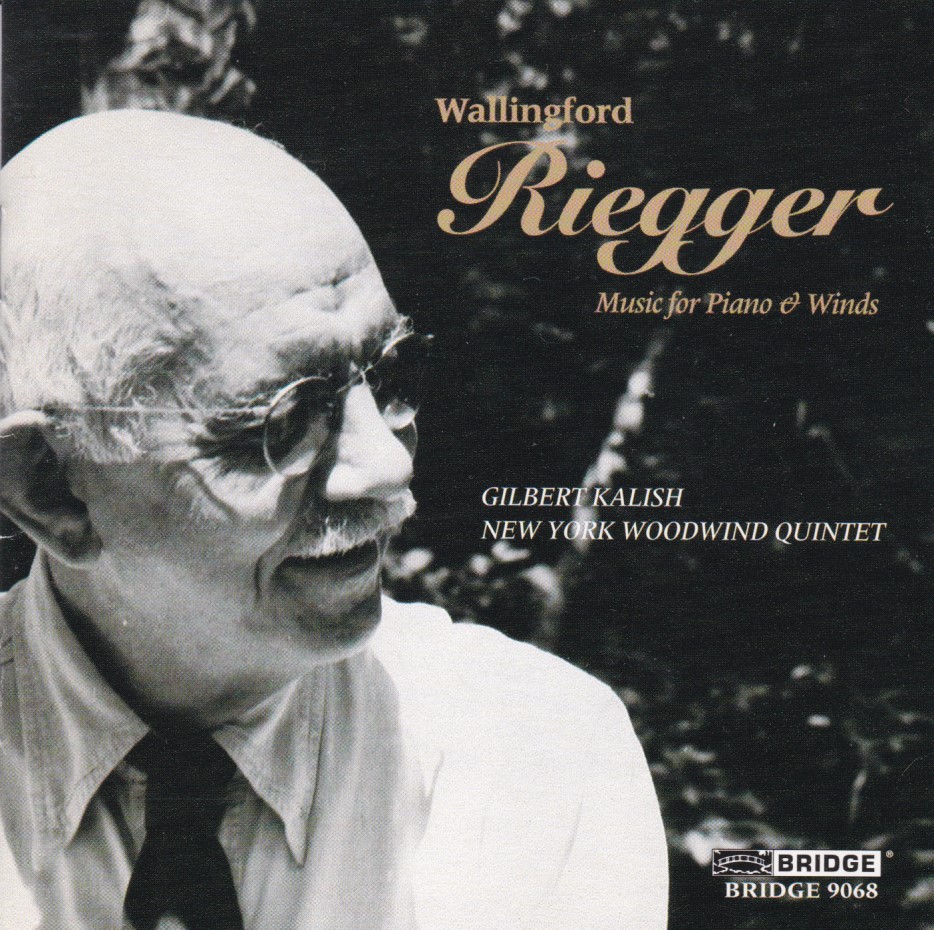 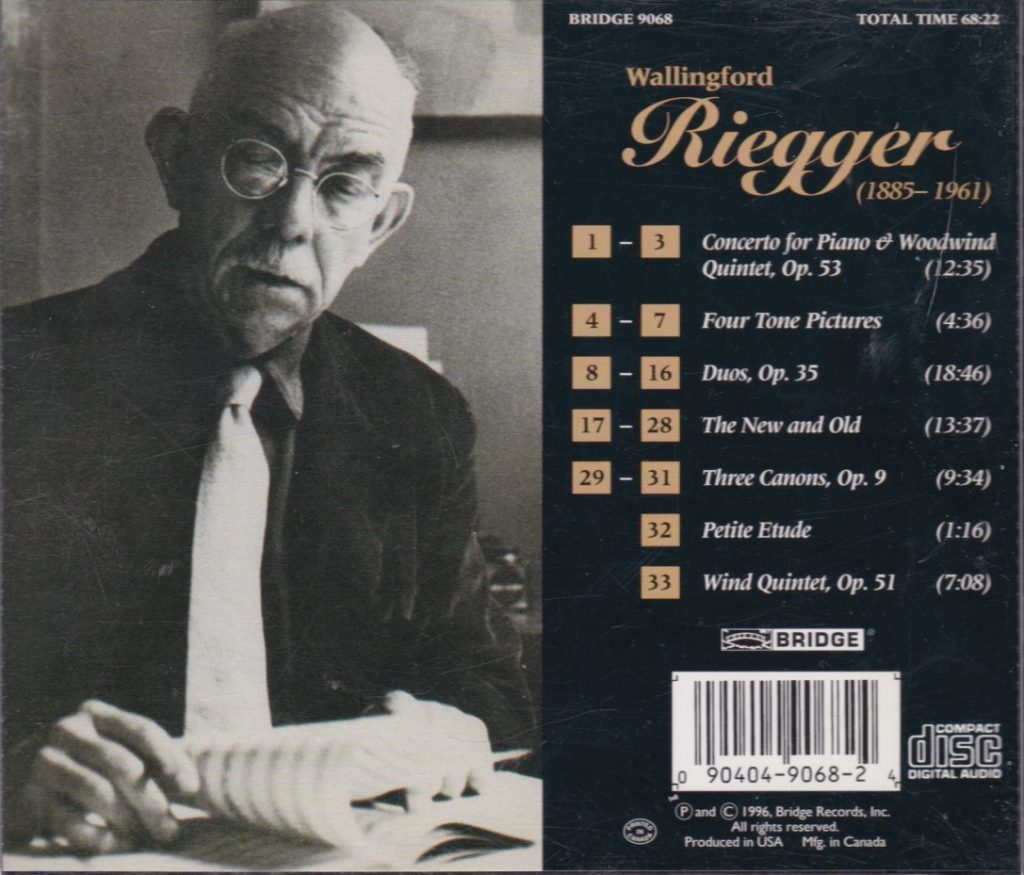 Recorded in May and December 1995 at Mastersound, Astoria

Wallingford Riegger (1885-1961) is an all but forgotten name among American 20th-Century music, and it is as lamentable as it is unfair. A member, in the 1930s, of the so-called “American Five”, which included Ives, Cowell, Ruggles and the even more obscure John J. Becker (on the latter, see my reviews of The Louisville Orchestra – First Edition Encores and John J. Becker: Soundpieces 1 & 5 / At Dieppe / Concerto Arabesque), he was, among other styles, one of the introducers in the US, before Sessions, Babbitt or Perle, of Schoenberg’s twelve-tone system. But Riegger was an ecclectic, and he himself classified his own music in four categories: “non-dissonant (mostly)”, “impressionist”, “partly dissonant” and “dissonant”. Add that he spent a long while, in the 1930s, writing dance music for various ballet companies, including Martha Graham’s. After the premiere of his Third Symphony in 1948, he enjoyed a modicum of recognition in the 1950s – witness the Naumburg Foundation grant to record it under Howard Hanson (now on a useful compilation, CRI CD 572), and the commissions and recordings he got from the Louisville Orchestra, three of which have been gathered on a fine First Edition Music reissue FECD-0007. The recognition continued even after his death: the Louisville Orchestra recorded a few more pieces in the 1970s under the baton of Jorge Mester, one of his earliest twelve-tone pieces, Dichotomy for Chamber Orchestra, and the unbelievable Study in Sonority for 10 violins or multiple thereof (not reissued), and the English label Argo published a recording of the same Dichotomy under Frederick Prausnitz, a filler to the LP’s main dish which was Roger Sessions’ Rhapsody and 8th Symphony (not reissued). Nonetheless, Riegger lapsed in oblivion: only a paltry amount of his works can be found these days on CD, and, for the major ones, in antiquated recordings (see the CRI and Louisville reissues). That Study in Sonority, a piece as daring as anything written by Ives or Varèse, should not be available in any form, CD or download, in a time when even the most obscure corners of every repertoire are represented, is as disheartening as it is infuriating. With the CRI and Louisville reissues mentioned above, this Bridge CD more or less sums up what is available of Riegger on CD (the rest is on multiple-composers collections). Of Riegger’s catalog of circa 75 opuses, hardly more than 20 are available, oftentimes in less-than-adequate reissues from the older days, and some of the major works (other than Study in Sonority, the two string quartets, the Piano Quintet, the two first symphonies and Dichotomy also come to mind) are not represented.

Riegger’s wind music is, in many ways, Schoenberg married to Janacek, the seriousness of Schoenberg’s processes and the peppery rhythms and wits of Janacek. The 1953 Concerto for Piano and Woodwind Quintet Op. 53 is a small masterpiece, a wonderfully witty composition in its somewhat stern manner (but the finale has a great sense of humor), a mixture of atonalism and neo-classicism, somewhere between Berg’s Kammerkonzert and Schoenberg’s First Chamber Symphony on the one hand, and Janacek’s Capriccio for Piano and Winds, Nielsen’s Wind Quintet and Bartok’s Piano concertos on the other – some of the playful percussive piano in the high registers in the middle movement, as at 2:18, even brought Messiaen’s Oiseaux Exotiques to mind… Gilbert Kalish and the New York Woodwind Quintet can send to a deserved rest the fine account of Harriet Wingreen and the New Art Wind Quintet, on the CRI collection of reissues mentioned above, because of its more natural sonics (the CRI recording, dating from the late 1950s/early 1960s, has significant tape hiss and somewhat artitificial stereo separation of piano and winds) and marginally greater liveliness and snap in the bouncing finale. Incidentally, the piece was premiere in 1952 by Rosalyn Tureck and the New York Woodwind Quintet, distant predecessor of the same-name ensemble that plays it here. There’s also a version from the early 1960s by Frank Glazer and the same New York Woodwind Quintet, originally published on Concert Disc and Everest and now made available in digital form by a label called Essential Media Group (EMG), 894231422522 – but the transfer is shameful, made from an LP, with excessive filtering and other sonic failures.

The short (circa 7 minutes) Wind Quintet op. 51 from 1952 is the Concerto’s ideal companion piece and shares the same perky atmosphere and rhythmic jauntiness. The pick-up ensemble around flautist Paul Lustig Dunkel on New World Records, Quartet Romantic, plays it in a slightly more animated and biting manner, and with slightly more vivid sonics. That said, the differences are marginal, and the New World disc is a compilation of various composers and much less interesting than this all-Riegger CD.

The nine Duos op. 35 from 1943 (three for flute and clarinet, three for flute and oboe and three for oboe and clarinet) and Three Canons op. 9 for flute, oboe, clarinet and bassoon from 1930 make again an ideal match. They may elicit a rather more austere impression, but that is only because of the limitations of the instrumental combinations. The same rhythmic sauciness is at play. The Stravinsky of the Three Pieces for Clarinet can also come to mind. The Three Canons are one of Riegger’s first atonal compositions, and I hear no striking stylistic difference with the Duos from more than a decade later. 1930: who wrote like that in the United States then? Well, yes: the even more obscure Adolph Weiss, I imagine, the American student of Schoenberg in the mid 1920s, who made a living as a bassoonist (he was in Mahler’s New York Philharmonic) and whose skills in the instrument totally eclipsed his compositional achievements. But Riegger was trained in Germany under Max Bruch and – a little disturbing fact that is erased from most of his online biographies – he returned to Germany from 1914 to 1916 to work as a conductor. Wasn’t there a war raging then between Germany and a good part of Europe? But, to Riegger’s defence, the US were officially neutral until 1917. Anyway, clearly Riegger’s models were German, and one can assume that he had first-hand information about the going-ons of the musical scene there.

In a way, it is regrettable that Bridge didn’t choose to record the complete wind music of Riegger: there’s a Prelude and Fugue op. 52 which comes immediately after the wind quintet in opus number, a Suite for Solo Flute op. 8 which comes immediately before the Three Canons, a Processional for Winds op. 36 from 1943 coming immediately after the Duos (there’s also a version for orchestra), and why not Frenetic Rhythms op. 16, scored for piano, flute, clarinet and drums (1933) – some lists also mention Etudes for Clarinet Solo without opus number from 1957, but the existence of that work seems dubious.

But it is good also to have those samples of Riegger’s Piano muisc. “New And Old” from 1944 (and not “THE New and Old” as the CD puts it) – also a score that I have – is one of the greatest “pedagogical” cycles that I know, and a score that should be given to play to all young – and old – pianists. It is a relatively easy-to-play (at least in some pieces) catalog of “modernist” techniques and how they are linked to the past. Riegger writes in the preface of the score: “the title of this collection is meant to focus attention on the continuity of musical evolution. So-called modernism does not imply a complete break with the past. It is rather a stage in the long development of music – not necessarily a higher stage, more expressive or more complex, but a new stage, reflecting either a new personality or the times in which we live“. The titles of each twelve pieces evoke a kind of “Debussy Etudes for Dummies” – the Augmented Triad, The Major Second, the Tritone, Chromatics, Dissonant Counterpoint, Tone Clusters etc. The score comes with detailed explanations of each piece and how they relate to the past. But “New And Old” are not just theoretical exercises – they are great music, Riegger again at his most imaginative and witty. Some are dazzling fireworks – Riegger even adapted the last, “Fourth and Fifths”, into an independent Toccata. Each is short and each tells a little untitled story. Some of these pieces are based on twelve-tone technique – but you’d never know. As Riegger writes: “hundreds of compositions in various styles could be written, all based on a single tone row, depending on the ingenuity, imagination, musical susceptibilities and psychological conditioning of the composer“. Kalish plays them to near-perfection. Although written earlier, the Four Tone Pictures from 1932 are the ideal “sequel” to New And Old and much in the same style – again wonderfully imaginative pianistically and musically, pieces equal to the best Cowell when Cowell doesn’t harp directly on the strings – and in fact, the last, “Grotesque”, a study in pianistic machine-gunning, is so Cowellian as to include octave-length clusters played with palm of hand.

Now, reader and music lover, is your chance to be among the happy few who recognize the unrecognized greatness of Wallingford Riegger.