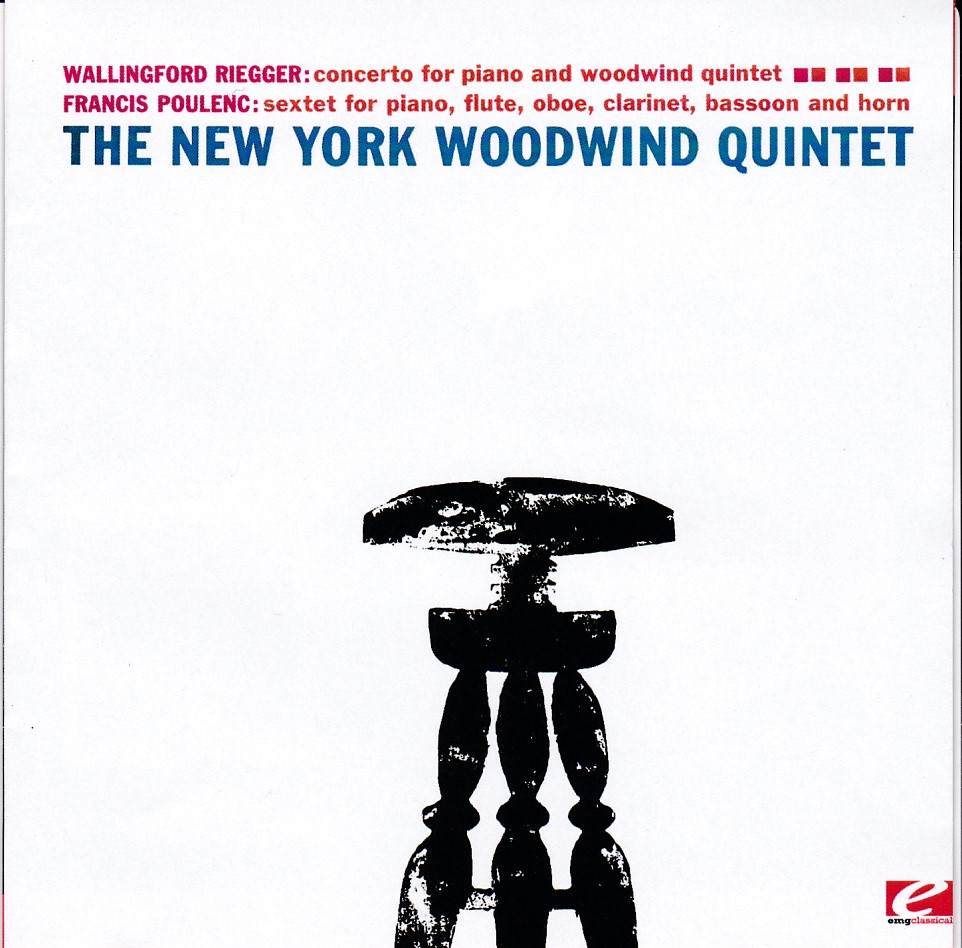 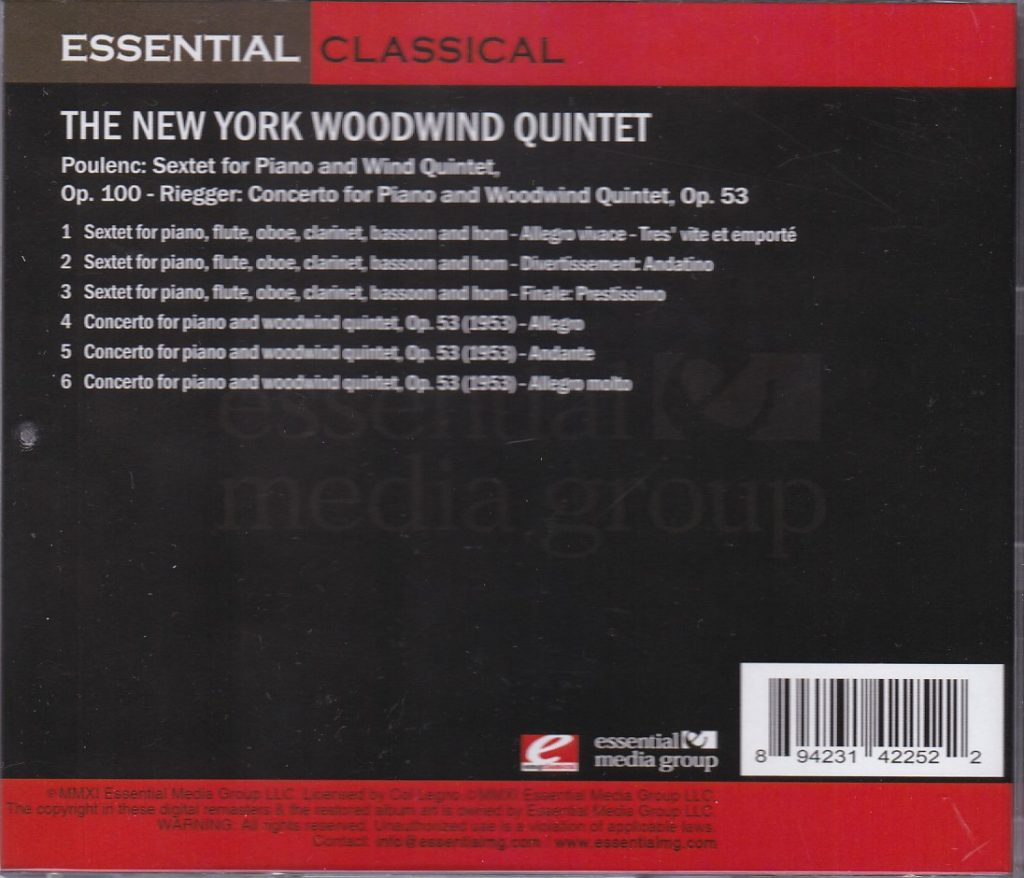 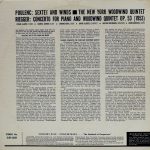 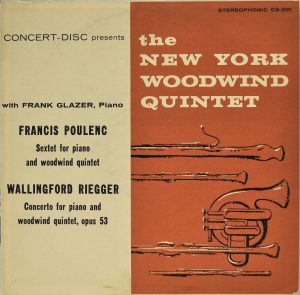 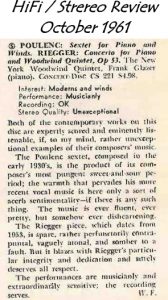 Complicated story, bear with me. I had crossed the path of the label Concert Disc in my time of LP collecting, aeons ago, because it had a lot of recordings by the Fine Arts Quartet (and indeed: only recently, with my thorough research on the label, did I realize that it was the Fine Arts Quartet’s own label), including 20th century repertoire (Hindemith, Bloch, Bartòk…) that was rare then and still is, although less, now. They also published many recordings with the New York Woodwind Quintet – and many by both ensembles united.

And I met Concert Disc again just recently, as I was compiling a very thorough discography of the CD- and other audiophile reissues of the label Everest (which you can find here). In the early 1960s Concert Disc had come into the orbit of Everest, first through a distribution agreement, then, after the label was sold by its founder Harry Belock to West Coast businessman Bernie Solomon in 1962, through closer ties, and it is probable that the label was finally bought by Solomon, although I haven’t been able to establish that for sure.

It turns out that the Everest copyrights and masters are now in the possession of a company called Countdown Media, now a subsidiary of BMG, and they have been publishing high-resolution transfers which can be bought as MP3 downloads from Amazon, and, for a much steeper price, as high-rez downloads from other websites like HD Tracks.

And this is where the two stories meet again, because Countdown Media also owns the copyrights and masters of Concert Disc and are also publishing new transfers. So it seemed a logical step to compile a discography of Concert Disc, which you will also find, with much more (including a complete history of the label, going back to its tape predecessors from the early 1950s, Webcor and Concertapes), here.

It is while compiling that discography that I found those reissues, available both in CD and download form, from this label here called Essential Media Group / EMG. EMG has a vast catalog and is useful for reissuing tons of obscure stuff from the early LP era. But from private contacts with helpful people at Countdown Media, I learned that those reissues were not “legitimate” – in other words, they didn’t own the copyrights and the issues were pirate. Now, what sources they used, what was the quality of their transfers, that remained to be established.

Well, I love the music of Wallingford Riegger, I think he’s an essential and one of the most underrated American composers. See my reviews of CRI CD 572 which compiles various recordings from the early 1950s to 1967, including Columbia’s recording of Riegger’s Third Sympony, and First Edition Music FECD-0007 which collates recordings with the Louisville Orchestra. So I’ll buy anything I can of Riegger, and this one hasn’t been reissued by Countdown, so it seemed an obvious candidate.

Well. I could excuse the fact that the CD reissues the LP “straight”, with its stingy timing of 31 minutes (which, at 12 bucks, ends up pretty expensive by the minute – but what wouldn’t I do for Riegger), if the transfers had been anything decent. But alas not. They’re made from the LP, surface noise and all, and not much human control seems to have been exercised. Transfers are made at a relatively loud volume, sound is very close and stereo spread seems exaggerated (although I don’t know how much of that comes from the original recording), but, due probably to excessive and indiscriminate filtering, instrumental textures are clogged and lacking transparency, which doesn’t make for a very pleasant listening experience. And you know this was made by a machine without any human control, when at the end of the slow movement of Poulenc’s Sextet (4;23), the sound fades out before the music is over. Sure, the computer and software interpreted a instant of silence as an end of track, and faded out before fading back in when the music returned, and nobody was there to readjust it, or even cared. It’s awful.

Too bad. The botched sonics didn’t even make discographic comparisons worthwhile, but the interpretations seemed great, with much energy and zest. The Poulenc HAS been CD-reissued in the early 1990s by Boston Skyline, Best of 3: An American & Paris, and at least, legitimately transferred from tapes (I wouldn’t vouch that they were the masters, these Boston Skyline reissues were licensed from Bernie Solomon who wasn’t the most fastidious copyright owner, but though I don’t haven’t heard yet this particular release, others from the same label and ensemble sound perfectly good). As for the Riegger, better go to the New York Woodwind Quintet’s later remake with Gilbert Kalish on Bridge 9068, and hope that Countdown Media will eventually reissue this one in state-of-the-art transfers.