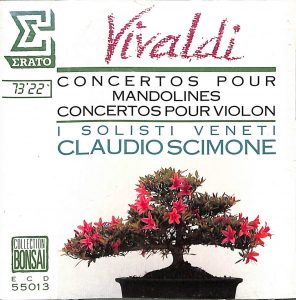 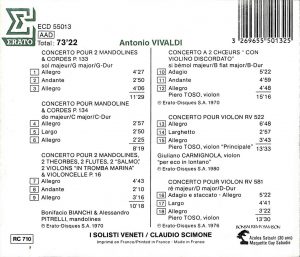 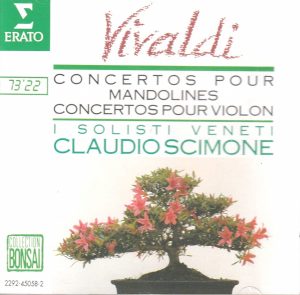 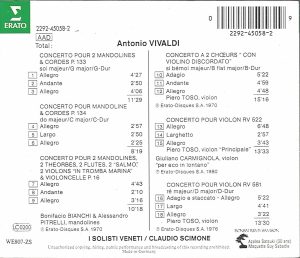 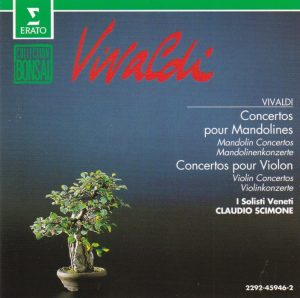 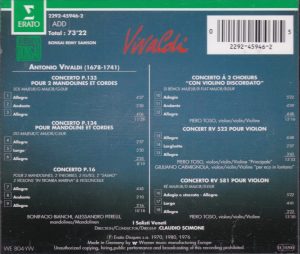 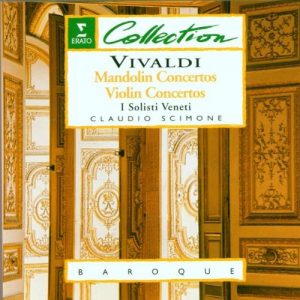 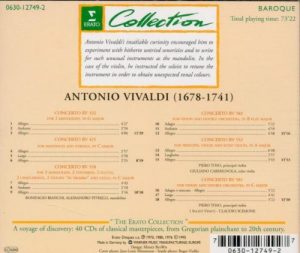 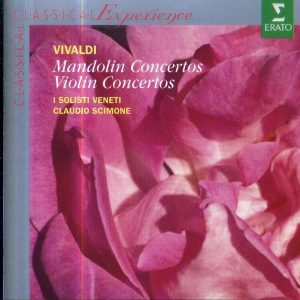 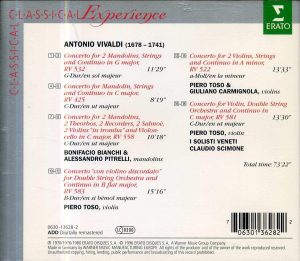 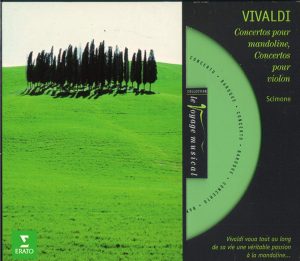 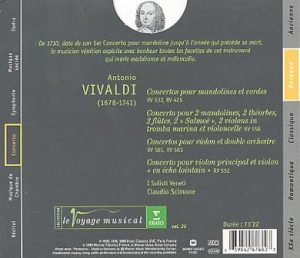 I Solisti Veneti’s earlier recording of the Mandolin Concertos and of little more than archaeological interest
Originally posted on Amazon.com, 5 May 2016

Buyers in search of I Solisti Veneti’s recording of Vivaldi’s Mandolin Concertos, beware. This is a budget reissue, first released to CD on Erato’s early budget series Bonsaï, NOT of Scimone and I Solisti Veneti’s 1983 recording with mandolinists Ugo Orlandi and Dorina Frati, but of their earlier recording, from 1969, with Bonifacio Bianchi and Alessandro Pitrelli. The first CD edition of the 1983 remake was on Erato ECD 88042, with a number of subsequent reissues which I list in my review, follow the link.

The previous recording was originally issued on LP on Erato STU 70545 (see one of the LP’s entry on discogs.com – link will open a new tab), and later (1980) licensed in the United States by the Musical Heritage Society, MHS 1100 (also listed on discogs.com). That 1969 LP  – and, hence, the CD reissue – had only three of the four works performed in 1983: the Concerto for 2 Mandolins – back then referred to as P133, now as RV 532 -, the Concerto for mandolin RV425 / P 134, and the Concerto “for multiple instruments” (including two mandolins and two theorboes) RV 558 / P 16. Left out was the Chamber Concerto RV 93, and with some good reason: it isn’t a work for mandolin, originally, but for lute and two violins.

But as a filler, back then and on the CD reissue as well, Erato added the Concerto RV 583 for scordatura violin and two antiphonal orchestras (“a due cori”), and to those four, the CD reissue adds again RV 581 “Per la Santissima Assuzione di Maria Vergine” for violin, and RV 552 “con violino principale con altro per eco in lontano” (“with a solo violin and a violin in distant echo”), for a generous TT of 73:22. The former is played by Piero Toso, the “historical” fiddler from I Solisti Veneti, and came out in 1976 on Erato STU 70968 (link will open new tab to entry on discogs.com) with three other “Solemn Concertos” (RV 212 “Fatto per la Solennità della S. Lingua di S. Antonio di Padua”, 286 “Per la Solennità di S. Lorenzo”, 579 “Funebre”); the latter, with both Toso and Giuliano Carmignola, first came out on Erato STU 71233, with three concertos for flute performed by René Clemencic; the recordings were from October 1978 and September 1979. There are various botches in Erato’s cheap edition: they mislabel RV 552 into 522 (which would have made it “L’Estro Armonico” Op. 3 No. 8), they give, for the mandolin concertos, the old Pincherle catalog numbers (P) instead of the now customary Ryom references (RV), they fail to give any such catalog number, right or wrong, to RV 583, and finally don’t tell you which mandolinist plays RV 425: it’s Bianchi. The original LP had lengthy line notes contributed by Claudio Scimone himself: the CD reissue has none. Fortunately (and as long as it stays uploaded). Flickr has remarkably legible photos of the LP’s liner notes  – they’re in French only. I’ve uploaded them also on this website, beginning and end (links will open new tabs). The MHS release provided a fairly thorough English translation – and I’ve uploaded that too.

I Solisti Veneti’s interpretation in 1969 may have been revolutionary in its time – in particular, Scimone boasted in his liner notes that it was the first time that Concerto P. 16 / RV 555 was heard in its original guise, with the so-called “violini in tromba marina” played by violins and not… trumpets, as (claimed Scimone) the previous editions and recordings had done, based on a mis-interpretation of Vivaldi’s indication on the manuscript score. He’s obviously referring to the Casella edition, which also substituted Heckelphones (!… a double-reed instrument of the oboe family, invented in 1904) to the salmoès (a simple-reed instrument and ancestor of the clarinet) and harps to theorbos, and for the recordings he may have had in mind those of Thomas Schippers with the Alessandro Scarlatti Orchestra of Naples, Schippers’ first orchestral recording (said the ads), published on Columbia 33CX 1451 / Angel 35335 in 1956, and Bernstein’s on Columbia ML 5459 / MS 6131 from 1958 (the latter reissued with Bernstein’s Four Seasons on either “The Royal Edition” vol. 98, Sony SMK 47642 barcode 5099704764221, 1993, or on Bernstein Century, Sony SMK 63161, barcode 074646316122, 1998). But for the salmoès (“a wind instrument that doesn’t exist anymore today”), Scimone used clarinets playing at the upper octave.

But independent of those considerations, Scimone’s interpretation in 1969 is firmly anchored in the Vivaldi interpretive traditions of the 1960s and 1970s: a little too trudging, a little too thick, a little too solemn. By 1983 and with an almost entirely new personnel (besides the conductor, only harpsichordist Edoardo Farina and flautist Clementine Hoodendoorn Scimone – Mrs Claudio – remain from 1969), they took on the interpretive lessons of the period-instrument ensembles that had emerged in the meanwhile, Harnoncourt’s Concentus Musicus Wien, Trevor Pinnock’s English Concert and Christopher Hogwood’s Academy of Ancient Music, or maybe it was only that they participated to the same stylistic trend towards leaner textures and more animated tempos. Their 1983 recording is better in all compartments, and it adds RV 93, originally a chamber concerto for two violins, lute and continuo, but played by them as a mandolin concerto. The slow movement of the Concerto for two mandolins RV 532 was very beautiful in 1969, but in 1983 the two new mandolinists add wonderful ornamentation in the repeats. There was a very nice touch in the slow movement of RV 558, where the mandolin trilled all his notes (played in unison with the violins) rather than simply plucking them, something not explicitly called for by Vivaldi but much more effective; but it’s there again in 1983. And then the 1969 Mandolin Concerto RV 425 was ruined by I Solisti Veneti’s choice NOT to follow Vivaldi’s advice that “the violins can all play pizzicato”. And you just need to compare that and the 1983 remake, where they do follow the advice, to realize how much more beautiful the pizzicato version is, turning an ordinary concerto into one of Vivaldi’s most sublime inventions.

So if it is the mandolin concertos that attracted you here, by all means, of the two, you should favor the remake. That is, if it is I Solisti Veneti’s version you want. Because in 1993 came Il Giardino Armonico on Teldec 4509-91182-2, and they sent the interpretation of these works in another dimension, with more energy, more enthusiasm, more liveliness and joyfulness, more poetic imagination in the phrasings, more sonic presence, more everything, making all the previous versions, even those on period-instruments, more or less obsolete. About this, see my review.

For all those reasons, this one is of no more than archaeological interest.  For a better memento of mandolinists Bianchi and Pitrelli, go to Erato’s recording of four 18th-century Mandolin Concertos by forgotten Italian composers (also with I Solisti Veneti and Scimone, from 1971) on Erato 5050466-5691-2-7 (where Bonifaccio, as in Bianchi, is spelled with two Cs).

I’ll return whenever with more detailed comments on the Violin Concertos.