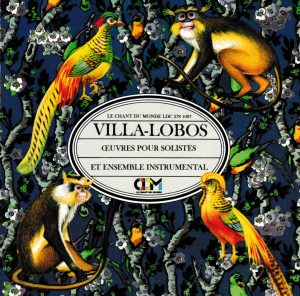 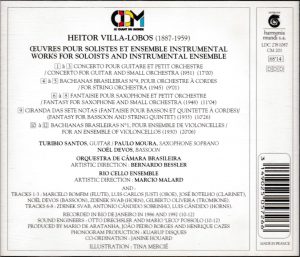 In principle chamber music is good – but good ensemble would have been even better
Originally posted on Amazon.com, 3 January 2009

In the early 1990s the French label Chant du Monde, which in the LP era had made a name through its licensing agreement with the Soviet Melodiya but which by then had been taken over by Harmonia Mundi, published a number of Brasil-originated Villa Lobos recordings. Among these was the first (almost) complete recording available on CD of the String Quartets, by the Bessler-Reis String Quartet (later Marco Polo recorded the Danubius Quartet and Dorian the Latin-American Quartet, now reissued on a cheap and valuable box by Brilliant Classics, barcode 5029365663427.

The members of the Bessler-Reis String Quartet – Violinists Bernardo and Michel Bessler, violist Marie-Christine Springuel and cellist Alceu Reis – are featured again on this disc devoted to “works for soloist and instrumental ensemble”, as core members of the Orquestra de Camara Brasileira, which is the accompaniment ensemble for all except the last piece, the famous Bachianas Brasileiras No. 1 for cello ensemble (played by the “Rio Cello Ensemble”, apparently the cello section from the Brasilian Symphony Orchestra).

The other compositions are the Concerto for Guitar and small orchestra (1951) with guitarist Turibio Santos, another stalwart from these Chant du Monde Villa Lobos series, the Fantasia for Saxophone and small orchestra (1948) with Paulo Moura, the Ciranda das Sete Notas or Fantasy for Bassoon and String Quintet (1933) with the only French performer featured here (although one long established in Brazil), Noël Devos, and Bachianas Brasileiras N° 9 for string orchestra (1945).

Except for BB 1 and Cirandas, the compositions date from Villa Lobos’ last creative period then. The mood is “gently Brasilian”, joyful, light-hearted, with nothing as outlandish and boisterous (or inventive) as “The Little Train in the Caipira” or the Amazonian compositions or the mightiest orchestral Choros. The Guitar Concerto and Saxophone Fantasy even sound at times like music that could have been written to accompany Frank Sinatra crooning. It makes for a pleasant listening, but there is nothing revelatory.

The sonic perspective in these recordings is decidedly that of chamber music. The positive side is the clarity (especially of accompanying woodwind and brass) and snap, especially welcome in the Guitar Concerto. To give an idea, in BB 9 it is a little like hearing Schoenberg’s Verklärte Nacht in the original version for string sextet rather than string orchestra. The neg… well, the less numerous you are, the better you must be, and these Brasilian performers are nothing special. The Cello ensemble in BB 1 and the full string ensemble in BB 9 sound under-nourished and lack grandeur (which doesn’t keep them from taking the final fugues at a very ponderous tempo) and, if my ears don’t fail me, their pitch is dubious and often grating. The same can be said of the accompanying ensemble in the Saxophone Fantasy. Ensemble playing and tonal lushness is not their forte, although, as I said, the chamber perspective offers a welcome alternative in the Guitar Concerto.

It is not only then because of poor ensemble playing that these interpretations are wanting. I’ve mentioned the ponderousness of the fugues. In the Saxophone Fantasy I have John Harle with The Academy of Saint Martin in the Fields under Neville Marriner for comparison (the same compilation, on an EMI double CD, also offers the Guitar Concerto with Angel Romero and the London Philharmonic conducted by Lopez-Cobos (barcode 094638152927). Harle-Marriner are much more lively than Moura-Bessler, and Harle’s tonal production is more disciplined (to say nothing of the orchestra). If I really wanted to see the positive side, I’d say that Moura-Bessler are more laid-back and crooning, with a nice evening-dinner-on-Copacabana atmosphere, and that in comparison Harle-Marriner’s sound almost too civilized and symphonic, smacking of the concert hall rather than the street or the beach. But what is nice on the street or the beach isn’t so acceptable on record.

With numerous recordings of the Bachianas Brasileiras and of the Guitar Concerto available, plus Harle-Marriner’s of the Saxophone Fantasy, this one doesn’t need to stay in my collection. If you really need it, don’t overpay for it, you’d be short-changed, despite the TT of 68:16.

PS. Back then someone left a comment under my review, to which I responded. I’ll reproduce the exchange here.

Ruminator
In my opinion, this CD should be commended for the very things this review condemns. “…what is nice on the street or the beach isn’t so acceptable on record” is exactly what separates this recording from “sound almost too civilized and symphonic” (i.e., like concerthall classical music) and gives it the edge in idiomatic authenticity. Recordings like this can’t be found everyday.

As a guitarist Turbio Santos compares just fine to Julian Bream in this composer’s music, not only in the concerto but in solo pieces, especially Choros No.1 (from the Chante du Monde guitar collection), while Bream sounds uninspired. Furthermore, call it an outrageous claim, but I believe the Maestro himself would have preferred these recordings over those by the likes of Marriner and Harle. This recording has a genuine South American vibe that the others can’t even imitate.

Discophage
I think Ruminator’s opinion is perfectly valid and he should have posted a review.