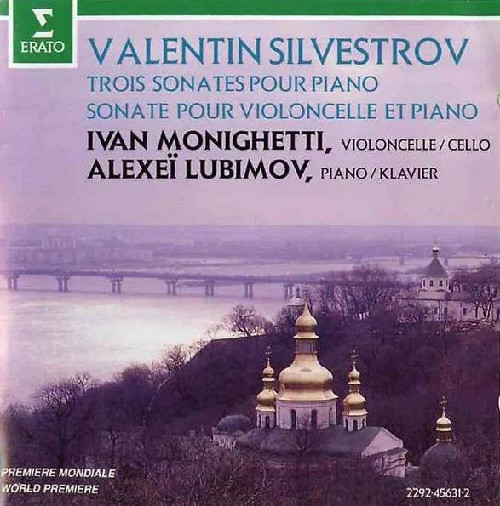 It is the string quartets of Silvestrov, which I enjoyed greatly (see my review of the Lysenko String Quartet’s recording on Etcetera KTC 1151), that sent me back to this disc, collating his three piano sonatas and sonata for cello and piano. I’m not as convinced, though. The Ukrainian Valentin Silvestrov, born in 1937, started off as a post-Webern radical (the atmosphere seems to have been slightly more permissive in Ukraine in the early 1960s than it was nearer the heart of the Empire in Russia, but, as many of his generation (Pärt, Gorecki), he soon grew dissatisfied with the avant-garde and moved away from it, to adopt a more mystical, meditative and slow-moving style. The First Sonata was composed in 1960, already Silvestrov’s reaction against “hammer music”, music that forces itself onto the listener’s attention. After its completion he put into a drawer, re-discovered it later, revised and trimmed iteven more. It is hushed and subdued, the outbursts are few and far between, they don’t build up to much intensity and are short-lasting. The harmonic mood and melodic outlook are vaguely reminiscent of the bitter sweet atmospheres of late Prokofiev or Shostakovich, or Hindemith, at their most brooding and meditative. Short but very atmospheric and dreamy second movement, playing on rippling scales and mysterious resonance, evoking almost Debussy at times. I have another recording of the Sonata, played by Jenny Lin on Hänssler Classics with trifling “bagatelles” of Silvestrov: she plays the Sonata with considerably more impact, if slightly less atmosphere, than Lubimov here, thanks also to the more present and vivid sonics

The Second Sonata, composed in 1975 and dedicated to Alexei Lubimov who plays it here, is more enigmatic still and seems first to go through a variety of moods and styles, sometimes expressionist in the manner of the (serial or not) Germans, but rapidly settling down into a mostly brooding and dreamy mood again playing much on atmospheric resonance, with apparently very elaborate pedal work. The are some moments of agitation and flurries of notes. There is a long central passage, starting at 6:30, in which Silvestrov uses Crumb-like effects of harping the strings or striking keys with fingers on strings to produce a dampened and distorted sound (in fact there is also much in Silvestrov’s play with resonance that seemed to point to Crumb). There are some very simple romantic melodies that almost seem there by way of pastiche or reminiscence, and, at 14:08, after a long pause that makes you think it is over, there is aother dreamy and wistful rippling passage playing in the keyboard’s upper registers, quite lovely – then it is really over. It is all very atmospheric, and the Sonata’s 17 minutes do produce a certain hypnotic effect, but it is also pretty repetitive and predictable I find (it would have been more original if Silvestrov had composed it 10 years earlier; still, for 1975 Soviet-Union, I guess it is, indeed, quite original), and I’m not sure I hear a true logic in the use of those techniques and styles, other than that of being a catalog of effects and styles.

In the Third Sonata from 1979 Silvestrov has traveled the full journey. No more outbursts, just short wave-shaped dynamic swells, and a long and somewhat rambling span of more dreamy and softly resonating atmospheres, sometimes ominous in mood: the keyboard improvisations of LaMonte Young and Terry Riley come to mind – but without the “just-temperament” feeling of being played on an out-of-tune piano.

The Cello Sonata from 1983, dedicated to cellist Ivan Monighetti who plays it here, is exactly the same, only the cello plays, so to speak, the piano’s the right-hand, adding its own brooding-romantic feeling to the music. Again, the music is not very varied (there is a more ominous and agitated passage starting at 7:24) but very atmospheric and, having reached that point, either because I got used to it or because the cello sonata is indeed more effective in its atmospheres, I found it quite fascinating. And did it vaguely bring to mind some passages of Britten’s Cello-Piano Sonata?

The most interesting aspect of Silvestrov’s Sonatas is that he plows deep his furrow. He’s set on exploring a certain style and mood and doesn’t budge, whether it taxes the listener’s attention and patience or not.