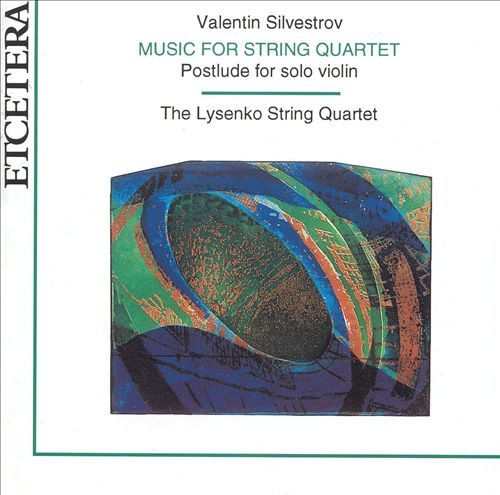 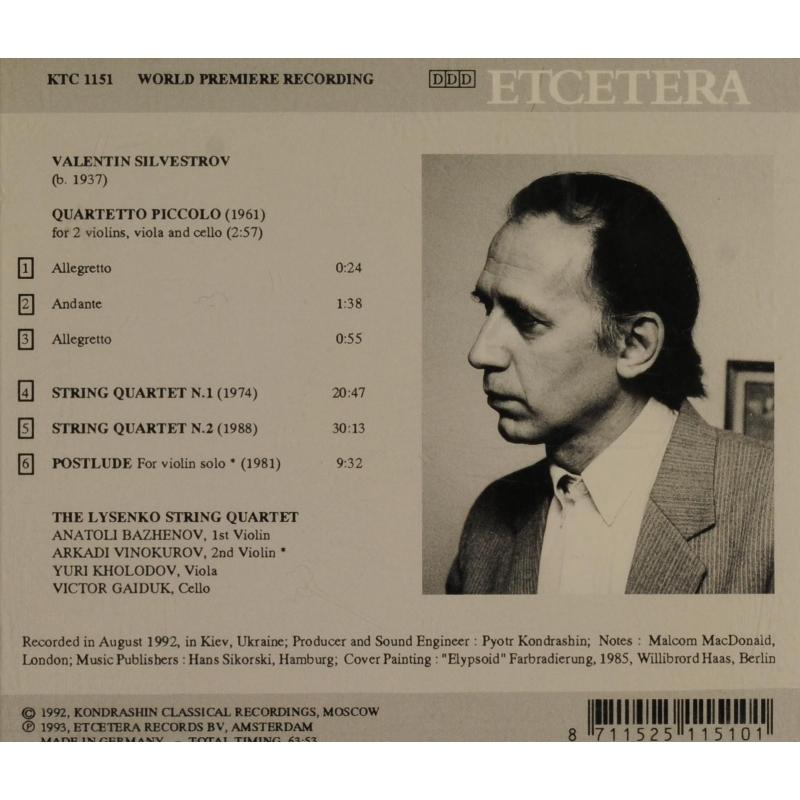 The String Quartets of Valentin Silvestrov are fascinating works, and quite original.

The Ukrainian Silvestrov started as the “fourth radical” of Soviet music in the 1960s – along with the three Russians Schnittke, Gubaidulina and Denisov. Apparently the atmosphere at the Kiev Conservatory in the early 1960s, under the stewardship of Boris Lyathoshinsky, was more liberal, open-minded and forward-looking than in the heart of the Soviet empire.

The Quartetto Piccolo from 1961 gives an echo of Silvestrov’s early, Webern-influenced period. It is short (the first movement is a mere 23-seconds long), terse and cryptic, but the brooding, questing slow movement provides a harbinger of the Silvestrov to be.

Like Pärt, Silvestrov’s twelve-tone essays earned him the disapproval of the official circles, and like Pärt, Gorecki and Artyomov (and at the same time) he soon moved away from the techniques of the Western avant-garde and developed a language imbued with a deep sense of mysticism, slow-moving, tonally-rooted. His new style is already entirely in evidence in the 1974 Quartet (numbered First Quartet).

It starts (and develops) as an ethereal, nostalgic, time-suspended Adagio, first tonal in a manner that seems to hark back to Renaissance polyphony or/and to the slow movements of Beethoven’s late quartets, the kind of thing the “World Music” composers championed by the Kronos Quartet might compose. But the interesting thing with Silvestrov is that it slowly glides out of that comfortable and predictable harmonic setting, through harmonic distortions, the repetition of small rhythmic/melodic cells, the use of the novel performing techniques and modes of sound production invented by the 20th Century avant-garde – but, other than a few occasional outbursts, never aggressively, always quite discreetly and to deeply atmospheric effect. The liner notes liken Silvestrov’s new style to a Slavic Morton Feldman, but it is even more the early String Quartet “The Seasons” of John Cage that Silvestrov’s evoked – in its stillness, its appeased and hushed character, its way of advancing in spurts at times. Like Cage’s, it is a highly fascinating work, quite original I find.

Though written 14 years later, the Second String Quartet is much in the same ilk, but longer (30 minutes to the First Quartet’s 20). It starts with an alternation between vehement outbursts and time-suspended stasis, but then it settles into a uniformly slow-moving, nostalgic, elegiac movement, possibly in the character of a dirge (it is dedicated to the memory of Silvestrov’s parents), interrupted by occasional, hushed moments of more fleeting intensity.

Postlude for solo violin from 1981 inhabits the same stylistic world, nostalgic, enigmatic, Cagean. Composer and performer (the Quartet’s second fiddler) bring out remarkably the polyphonic capabilities of the instrument, in a hushed and unassuming way.

The two String Quartets were premiered by the Lysenko Quartet who recorded them here, so they must be considered the ideal interpreters (some small details, like an insecure entry at the threshold of silence at the end of the 1974 Quartet, make me think that there weren’t many retakes). The way the first fiddler tosses off the vehement quadruple stops with intervals of three octaves at 14:14 and after in the same Quartet, is impressive. 1992 recording, fine sound, terse liner notes.