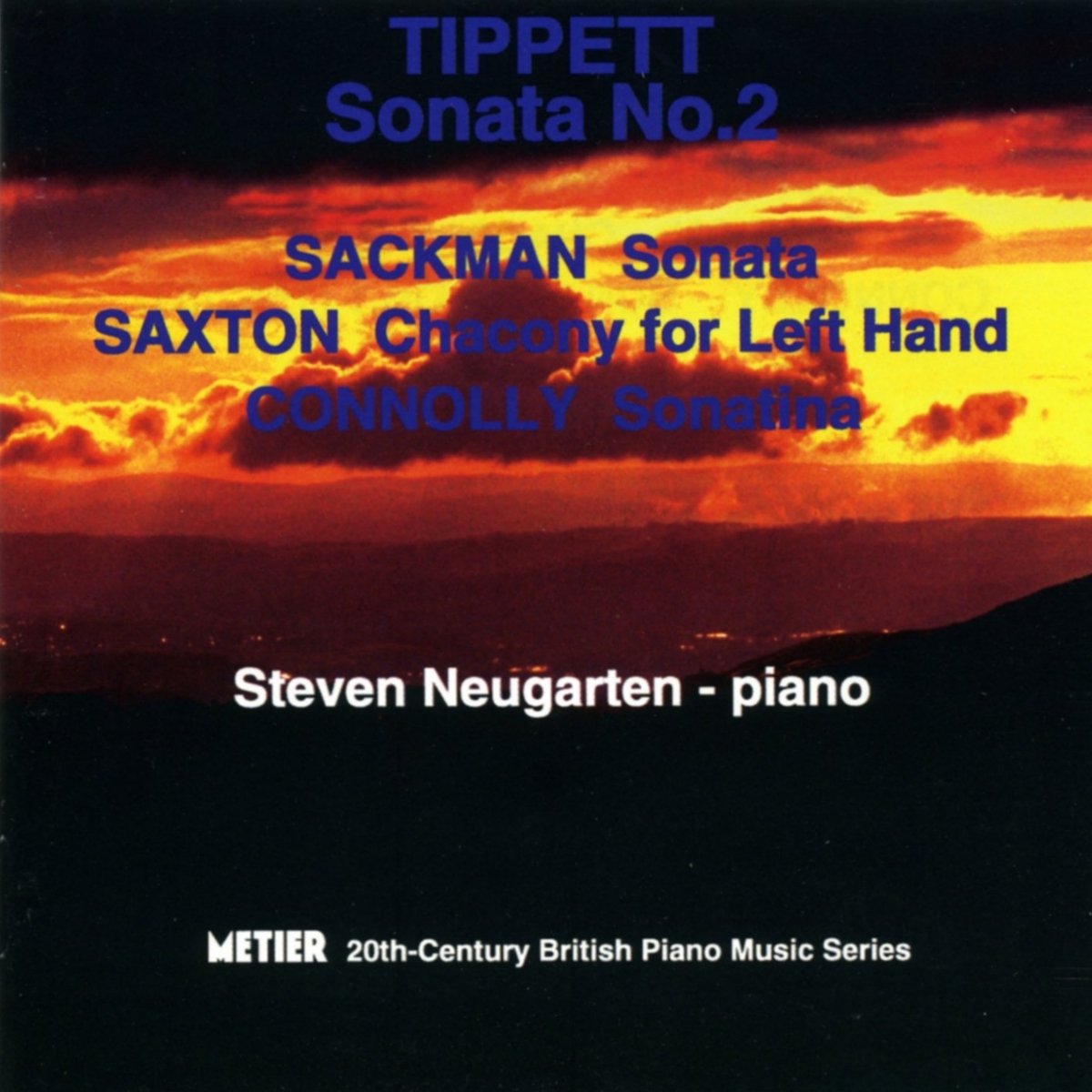 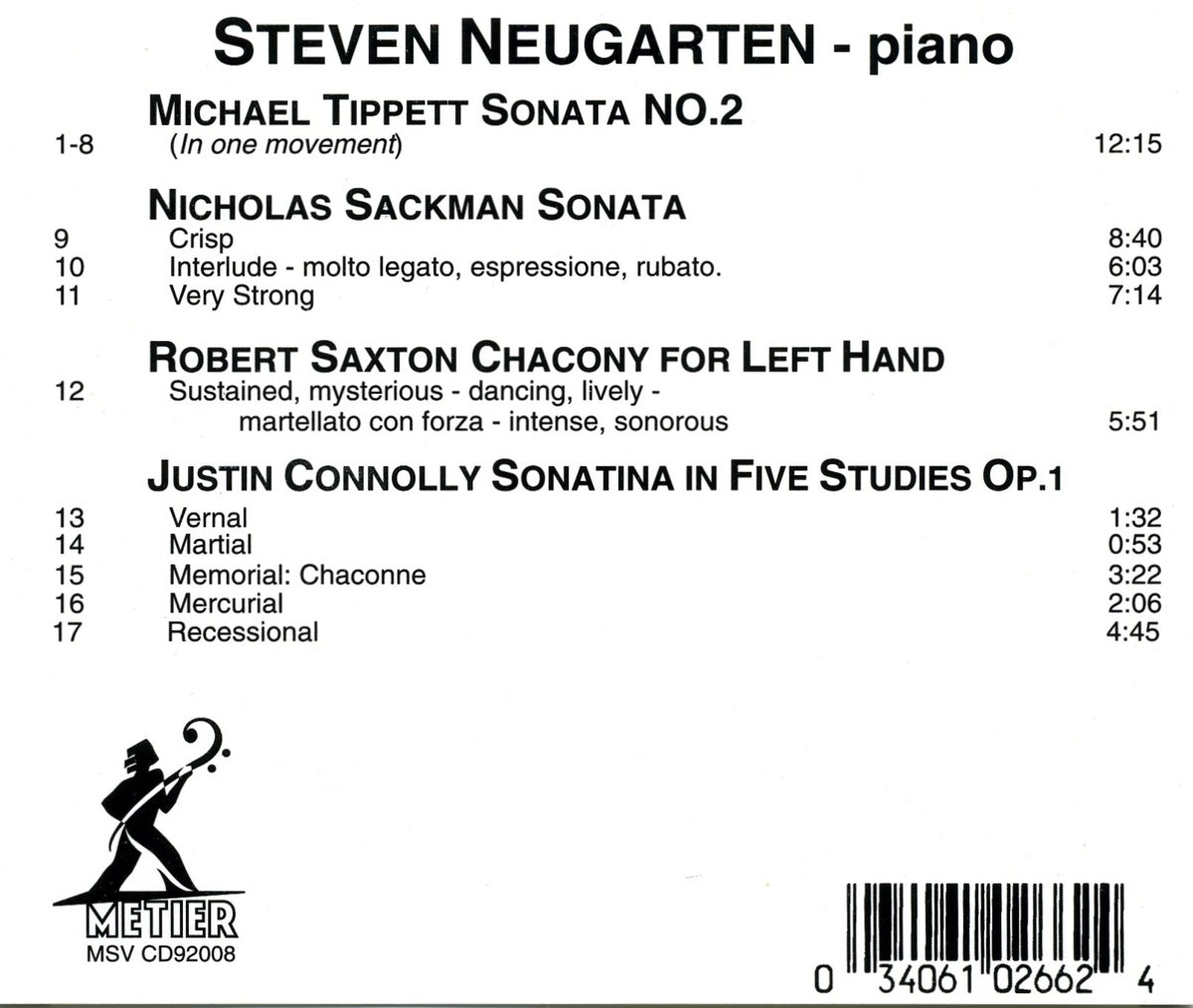 Great recital of British 20th-Century piano works, by a pianist who then disappeared from the recording limelight
Originally posted on Amazon.com, 26 November 2013

Tippett’s Second Sonata from 1962 is a fabulous work. Couched in one movement, it is formally original – no development of themes in the traditional sense, but a block construction based on eight blocks, each with its own character and tempo, which reappear in succession, in various orders, clipped or extended but never developed. But what really matters is that Tippett, like Britten or William Mathias (see my review of Raymond Clarke’s recording of Mathias’ Sonatas Nos. 1 & 2 and John Pickard’s Sonata and “A Starlit Dome” on the label Athene) or Aaron Copland (who, with his Piano Sonata and Piano Variations, wrote two of the most magnificent works for solo piano of the 20th century literature), is a composer who is content to write within the traditional confines of an extended tonality and use the traditional resources of piano playing (no fist or arm-hammering on the keyboard, no Crumb-like string pulling here, just ten fingers on the keyboard), and yet manages to conjure an entirely personal and engaging language. The Sonata is pounding, brutal, with some impressive passages of furious repeated-notes sounding like a machine gun, but also has moments of great melodic delicacy and poetry, some very Britten-like and some reminiscent of Copland’s Sonata – I must have a special obsession with the latter, because I heard echoes of it in Mathias’ First Sonata, and I hear some too in Tippett’s Second (but they weren’t the same echoes).

Steven Neugarten delivers a great performance: helped by the vivid sonics, he has both the pounding power and the poetic and songful delicacy required by the score. Of all the versions I’ve heard – John Ogdon on EMI, Paul Crossley on CRD, Nicholas Unwin on Chandos, Peter Donohoe on Naxos and John Osborne on Hyperion – only the latter do I find just very marginally better, because he has the same qualities as Neugarten but delivers a touch better some (but not all) of the score’s minuscule details. And of course Osborne has the advantage of offering Tippett’s complete output for piano, solo and orchestra. The one-movement Sonata gets 8 cues with Neugarten, following the work’s broad architecture, and with a detailed mapping in the liner notes of that architecture. But, since the first statement of each thematic block doesn’t get its own cue, too bad each isn’t indicated by its timing point, for the clarity of listeners without a score (which, I suspect, will be most). And be aware that the tempo and metronome indications associated with each cue on iTunes are entirely wrong: they are in fact those of each thematic blocks in their first exposition, but the cues do not correspond to those blocks. If you listen on iTunes, these would be the correct indications for each track:

The other works, Nicholas Sackman’s Sonata (1984), Robert Saxton’s Chacony (1988) and Justin Connolly’s Sonatina in Five Studies (originally written in 1962 but revised in 1983), offer fine complements. They all share with Tippett’s the combination of the furiously pounding and the delicately dreamy, although none display quite the unique and unmistakable personality of Tippett’s Sonata and the composer’s ability to write tunes that immediately engage your attention, but they all offer fine rewards. Connolly has a knack for writing kaleidoscopic and almost pointillistic toccatas, especially in the first (“Vernal”) and fourth (“Mercurial”) movements of his Sonatina. Robert Saxton’s Chacony for the left-hand was composed for, premiered and recorded by

Leon Fleisher (on Sony SK 48 081 “Leon Fleisher Recital” (for the left hand), barcode 5099704808123 or 007464480812). It’s a powerful piece, starting with a very atmospheric ground in the form of quasi full-tone scale bathed in resonance, but soon evolving into fierce toccata-like pounding, before receding back to the opening scale in the coda. Both versions are fine, really. Fleisher gives a slightly more spacious reading although the difference is not really perceptible, and, as an example of how the merits are shared, his opening 32nd-note runs when the music becomes agitated and toccata-like are dryer and clearer, less drowned in the resonance of the sustaining pedal (at 1:40 with Neugarten, 1:51 with Fleisher), but in the same passage Neugarten brings out better the accents that restate the ground. Both versions will give satisfaction although, of course, Fleisher has the aura of being the premiere performer… and of being Fleisher.

Neugarten is an English pianist born in 1960, first taught by his father and elder brother, but graduated in physics and first embarked in a career as a researcher. He resumed studying the piano in 1986 after 10 years without lessons, and started his professional career in 1988. This disc, made in October and November 1994 or 1995 (the product info isn’t clear about it) was his debut recording. Apparently, it stopped there, at least as far as his recording career is concerned. From the info I’ve found online, he’s worked mainly as a repetiteur and is now pianist and conductor for the English Pocket Opera Company, a company that does opera “for, by, and with children and young”. It’s a tough competitive world and sadly the talented don’t always make it to the limelight.