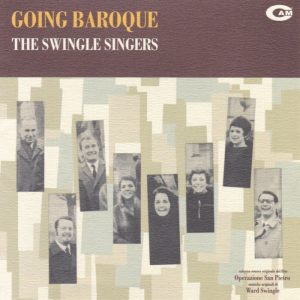 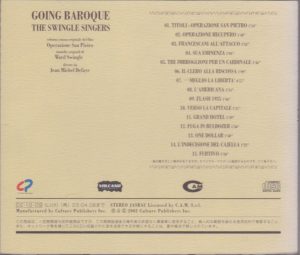 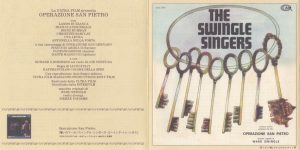 Whoever was responsible for this reissue (a Japanese label called Culture Publishers, apparently specialized in film music. “CAM” appears to be the label of the original Italian LP) was NOT helpful, if not downright deceptive, by titling the CD “Going Baroque” in huge caps, with “operazione San Pietro” sent in very small type at the bottom right corner, leading one to believe that it may be a reissue of “Going Baroque”, the Swingle Singers 1964 album devoted to Bach & sons, Handel and Vivaldi (see my review of the 1986 CD reissue on “Anyone for Mozart, Bach, Handel, Vivaldi?” with information about original releases and all the CD reissues), and be mislead that this is in fact the reissue of Ward Swingle’s film score for the Italian film “Operazione San Pietro”.

It wasn’t the case on the original LP, CAM SAG 9003 (see more photos on the LP’s entry on discogs.com – link will open new tab). CAM (acronym for Creazione Artistiche Musicale) was an Italian label established in 1959, specialized in film soundtracks (it gets an entry on Italian Wikipedia) and the Japanese label responsible for the reissue, Culture Publishers, has a series devoted to CAM’s recordings. The film was directed by the hack Italian director Lucio Fulci (link will open new tab to his entry on Wikipedia) and came out in 1967 (also in English with the title “Operation Saint Peter’s”). Short excerpts on YouTube lead me to think that it is an nth rate comedy, best left in oblivion. Nonetheless, it gets an entry on Wikipedia and, incredibly, it has even

The album opens with a track titled “Titoli: Operazione San Pietro” (obviously, the music of the opening credits), which is in fact Bach’s so-called Little Organ Fugue (Organ Fugue BWV 578), a piece that the Swingle Singers would later record many times, starting with (if my records are straight) the album titled “Baroque”, published by what was then CBS and by the group then designated as Swingle II, in 1976 (not reissued on CD), but more readily available on their 1994 “Bach Hits Back” on Virgin Classics. It recurs in numerous other tracks, providing really the fulcrum of the score: track 3 after a 45-second plain-chant introduction, track 8, 10, 12, 13 & 15 where it is entirely modified (and comes with an accompaniment of strings and jazz woodwinds and brass in the first two).

The disc is interesting for featuring (other than the various variations on Bach’s Fugue) original compositions of Ward Swingle rather than the arrangements of Bach, Mozart, Vivaldi and the rest that made him and the Swingle Singers so famous in the 1960s, all sung in their typical, gentle, elegant jazzy and scatting style, with (as was their wont until at least the late 1970s) accompaniment of percussion and double-bass, and also full orchestra in tracks 8 to 10. That said, agreeable as it is, there is nothing in Swingle’s own music that is likely to send you to heaven as do his arrangements of Bach, Mozart and Vivaldi – the various variations of Bach’s Fugue are entertaining, though. TT is also the shortest I’ve ever met with a disc of the Swingle Singers – their LPs were short even by LP standards, hardly ever over the 30-minute mark and when so, just barely, but this one beats even that: 24:12. Liner notes are in Japanese, too (but 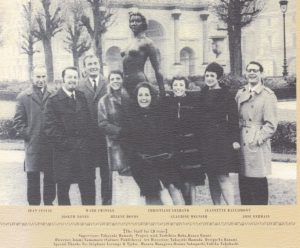 there is a nice photo, with the eight singers individually designated, which is rarely the case in the other albums of the original Paris-based Swingle Singers). Anyway, I’m happy I’ve bought it (and found it at reasonable price too) and heard it. Just fantasizing over what it might be would have been endlessly frustrating; now I know that it isn’t so much – and certainly not worth the three-digit figure sometimes demanded on the marketplace. This is of specialist interest, to be reserved for the Swingle completists like myself. The album is mp3-downloadable, though, which is probably a good option.