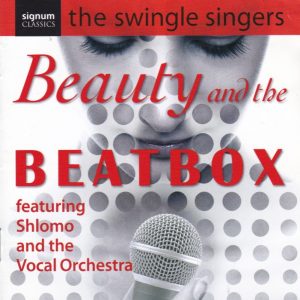 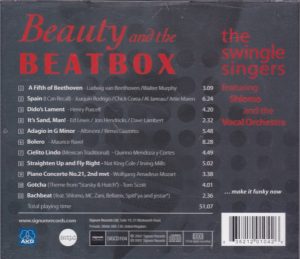 The nice thing about the records of the Swingle Singers is that you learn important things (even if, given the very scanty product info and not always informative liner notes, you’ve got to do much of the learning yourself, by searching on the internet). Like, I had thought that their take on the first movement of Beethoven’s Fifth Symphony – titled “A Fifth of Beethoven” and less an arrangement, in fact, than something like a “variation on the first movement of Beethoven’s Fifth”, interspersed with some famous pop or disco music which even I, an almost exclusive listener of classical music, had engraved into my memory – was their own arrangement. Trying to find out more about what that pop/disco part might be, I searched the guy who was credited along with Ludwig van Beethoven: Walter Murphy. Oooooh, OK! So (I thought) “A Fifth of Beethoven” is in fact an arrangement of Walter Murphy’s faaaamous disco arrangement of Beethoven’s Fifth, the one that propelled him into the limelight back in 1976, so what we get here is the Swingle’s arrangement of (I first thought) Walter Murphy’s arrangement. And to think I could have existed since 1976 without any notion of who Walter Murphy was and is (he seems to have more or less disappeared too since the 1980s, I wonder why). When music combines entertainment AND learning, isn’t that a bliss?

So, doing my chores very conscientiously, I downloaded Murphy’s original… only to realize that those pop or disco excerpts that I had recognized without being able to put a name on them were in fact NOT in Murphy’s arrangement. It’s so nagging to have a tune that you recognize but can’t name; what are those words they’re singing, maybe they could give a clue? “Stay in the night”? “Stand in the light”? But the singers’ pronunciation is a bit slack and it ain’t so clear. So I searched more, and bang, found it: the arrangement intersperses short excerpts from the BeeGee’s “Staying Alive” (that’s the tune I had recognized) and Labelle’s “Lady Marmalade” (in fact the glorious line “itchy itchy yah yah” is sung simultaneously with “staying alive”). So now that I can put a name on this anonymous knowledge I had somewhere in the back of my mind, I am a better man.

Anyway, I love arrangements, and I find what the Swingle Singers do with the pop and classical hits is great and immensely fun, and this disc is a new winner. In truth, I find their version of “A Fifth of Beethoven” much better than the original(s) – err… I mean, Walter Murphy’s original (and include therein LaGee and the BeeBelles), not Ludwig’s -, way more inventive, imaginative, with a great beat, and removed of their thick crust of vulgarity.

This album offers a mixture of classical music and various “pops” hits. Among the former are Dido’s Lament from Purcell’s Dido and Aeneus, Albinoni’s Apocryphal Adagio, Ravel’s Bolero and the Adagio from Mozart’s 21st Piano Concerto. In the latter category I’ll include Jazz and Rhythm & Blues (Nat King Cole’s “Straighten Up and Fly Right”, Count Basie’s “It’s Sand, Man”, adapted from the “vocalese” arrangement originally sung by the famous Lambert-Hendricks-Ross trio, from their album “Sing a Song of Basie” -, Al Jarreau and Chick Corea’s “Spain (I Can Recall)” whose intro is based on Rodrigo’s Ajanjuez Concerto, and whose original is in the album “This Time”, This Time), invented folk (Cielito Lindo, a “popular Ranchera song from Mexico, written in 1882 by Quirino Mendoza y Cortes” says the always-helpful people’s-processed internet encyclopedia), and TV (“Gotcha”, the theme from Starsky and Hutch); Murphy’s Beethoven qualifies, I guess, as a mixture of both, and so does the last track, Bachbeat – but more about that hereunder.

I’ve contented in my other reviews of the Swingle Singers that one reason for the fascination and fun procured by their arrangements and realizations is that they elevate to high art what we all do, in a very rudimentary manner and without even thinking about it, walking on the street, washing the dishes, ironing or vacuuming – and, notoriously, showering: humming our favorite tunes. But the Swingles are to our shower humming what a Picasso is to your kid’s drawings. And I’ve also opined that by so doing, they return instrumental music to its very origin and essence: the human voice – as, presumably, the great composers, Bach, Mozart, Vivaldi, Handel and all the others first hummed these tunes for themselves before committing them to the music sheet.

The arrangement of Ravel’s Bolero (track 6) is a good case in point. Now here is a tune that sticks in your head and easily comes to your lips, when you’ve once heard it. And Ravel designed it so that it would be obsessive in its endless repetition. So the Swingle’s arrangement is immensely fun and effective, and the Swingle’s voices bring it a caressing sensuousness that that is very different from the more sultry sensuousness of the original. It provides a nice complement to the many arrangements featured in “Ravel’s Greatest Hit: The Ultimate Bolero” on BMG/RCA (2004), barcode 828766138627.

There is something of a paradox in the Swingles’ arrangement of Lambert-Hendricks’ arrangement of Basie’s Sand Man, because the latter was already a brilliant vocalisation of an original written for Big Band, and I can’t say that the Swingles’ take (which basically attributes the song to solo mezzo Kinret Eretz – with traces of an Isreali accent – accompanied by the rest) really measures up to the irresistible verve of the jazz trio and its uncanny ability at imitating the various jazz instrumental sections. Nonetheless, on their own, the Swingles’ arrangements are entertaining and exciting, with the group’s (and pardon the repeat) unique caressing sensuousness in the slow numbers (Albinoni, Purcell, Mozart) and a seat-lifting beat and swing in the others. They are full of imaginative vocal effects; the imitation of stopped trumpet at 1:52 in Cole’s “Straighten Up” is both hilarious and jaw-dropping: how do they do it? Cielito Lindo is also very entertaining – the Swingles are obviously having lots of fun here. You learn on Wikipedia that, commonly played by mariachi bands, Cielito Lindo has been recorded by many artists, that range from Pedro Infante to Pavarotti; and indeed the latter can be viewed on YouTube, in duet with Enrique Iglesias: it is abjectly vulgar; same with the three tenors singing it under Mehta: ay ay ay indeed. There’s another video of Domingo in 2009, white hair and mock Mexican suit, with an off-pitch chorus of three fat girls that remind me of Ursula the Sea-Witch in The Little Mermaid, and a band of Mexican trumpeters that seem out of a cheap Hollywood movie. How far under the ground can one lower oneself in the name of bringing the pops to the masses? The Swingles are here a model of taste, elegance, fun and invention.

But there is more to this disc than the Swingle’s customary and highly entertaining arrangements. One of the group’s hallmarks was always that they “jazzyfied” the Classical classics, by adding a “beat” (or, in the slow movements, simple color) provided by drum and double-bass accompaniment. They were “real” with the original, Paris-based group founded by Ward Swingle in the early 1960s, and the percussion became purely vocal in the 1980s with the new London-based Swingle group. In the new disc they’ve really pushed the percussion side of the arrangements. It is interesting to compare their new Adagio from Mozart’s 21st Piano Concerto, to the group’s (other members) 1991 recording on A Cappella Amadeus – A Mozart Celebration (Virgin Classics): there’s marginally more abandoned sensuousness in the earlier recording, but the “jazzy” double-bass punctuations are now much more prominent, and joined by vocal “brushed drum”. The new arrangement is also more of an ensemble effort; in 1991 it was very much soprano underpinned by the silky tapestry of the rest.

But in their new album the Swingles have gone one step further and enrolled the services of “Shlomo the human beatbox”. So now here is some more learning for me. It’s the first time I am made aware of the existence of such things as “human beatboxes”, so I’ve researched. And, yes, there is this hot thing – with world championships even – about imitating the sonics of the beatbox using only vocal resources, and Shlomo is apparently one of the top champions of that art form. I’ve looked at a few videos on YouTube, and it is, indeed, mind-boggling and hugely exciting. In fact Shlomo does much more than emulate just the beatbox. Whatever a DJ can do with two turntables, Shlomo seems able to reproduce with his mouth and a microphone.

In fact, most tracks are credited as featuring “vocal percussion” and only four, “human beatbox”: those are tracks 1, 3, 5 and, I guess (though it isn’t explicitly credited), 11, where Shlomo is joined by “MC Zani, Bellatrix, Spitf’ya and jestar”, with one of the Swingle’s sopranos doing the “lead vocals”. From what I can hear, the difference is that the beatboxes display a much more elaborate array of sonic and percussive effects. Shlomo does the beatbox only in tracks 1 and 11; in tracks 3 (Dido) and 5 (Albinoni) it is two men from the Swingle Singers.

The disc closes with Shlomo’s take on one of Ward Swingle’s most famous arrangements: the Badinerie from Bach’s Orchestral Suite No. 2. It is customary with such cross-over arrangements to write that “if Bach had heard it he would have loved it”. No way: if Bach could hear it he’d think he’d been sent directly to hell. Nonetheless the track’s 2:30 unfold tremendous energy, the energy of rap and house music applied to Bach. So, the Swingles started out in the 1960s by jazzifying Bach; now they are rapping and housing it. I love it. But Bach lovers beware: you might hate it as much as Bach presumably would have.

Still, this is one of the most original and exciting recordings of the Swingle Singers – and I’ve heard almost all of them.