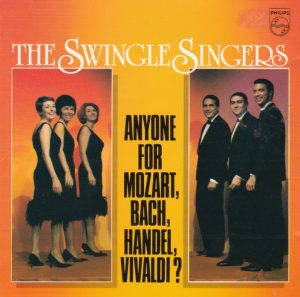 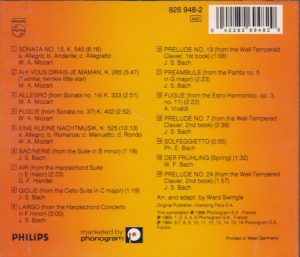 Irresistible. I’m not sure I even want to hear some of these pieces in their original form anymore
Originally posted on Amazon.com, 9 March 2011

Like, I suppose, everybody else, I find myself naturally humming or whistling my favorite tunes, under the shower, cooking or washing the dishes, gardening, walking on the street from one place to the other, without even realizing it. And this is probably as natural to mankind as breathing.

The Swingle Singers are to that what Picasso is to your three-year old’s drawings. Since their first “Jazz Sebastian Bach” album in 1963, in whatever line-up of singers (the group is still in existence, although the original members, including the group’s founder and leader Ward Swingle, are long gone; but Swingle [he passed away in 2015] still acts as musical advisor and arranger), they’ve developed a unique and fabulously entertaining approach to the classics, giving an irresistible pizzazz to compositions you thought you knew from inside out.

This CD collates the original group’s second and third albums, both for Philips:

Incidentally, the US edition of the CD uses the cover of the Swingle Singers’s original LP “Les Romantiques”, although no track from that album are reissued here.

LPs had short timings in those days, remember? The “Baroque” LP was 24:30 and the Mozart 28 minutes – making it incomprehensible and really unjustifiable that for the reissue Philips should have left out one track from the Baroque LP, the Allegro from Haendel’s Concerto Grosso Op. 6 in A-flat, for a TT that, at 50 minutes, is relatively stingy, and would still have been if the track has been included. But it is still twice as good, time-wise, as the recent reissues from Universal, which consist of the original albums “straight”: Going Baroque on Philips 546 746-2 and Swinging Mozart, Philips 548 538-2 (both have been collated in a twofer, Going Baroque / Swinging Mozart, Philips 586 154-2, see the reviews of the individual releases for details). And the missing track can be downloaded for the usual cost of one track. Incidentally, what is played on track 3 is absolutely not Mozart’s 14th Sonata K 333, but the first movement of Sonata No. 5 K 283, and K. 545 (track 1) is Mozart’s 16th Piano Sonata, not his 15th.

Anyway the short timing counts for little in view of the music’s irresistible verve and allure. What makes the art of the Swingle Singers so irresistible is a combination of factors: one, their choice of the most popular or characteristic tunes, those that every lover of Classical music will know on the back of his tongue: Mozart’s Eine kleine Nachtmusik and variations on “Ah vous dirais-je maman” (or “twinkle twinkle little star” for a public with no literacy in classical music), the Badinerie from Bach’s Suite in B minor and others. Or maybe they’ve become the composers’ most popular pieces precisely because the Swingle’s arrangements and albums have made them so: I’m not sure all the excerpts selected here can in fact be counted among their composer’s respective “greatest hits”, but hearing the Swingle’s arrangements you certainly think they are.

To these old warhorses, the timbral novelty and seductiveness of the vocal transcription of instrumental and orchestral music offer an irresistibly refreshing and ear-catching guise. Add to that that, while the Bach and Mozart albums recorded by the new Swingles in the 1990s carefully balanced the fast and dynamic numbers and the more plangent and lyrical ones (see for instance my review of A Cappella Amadeus – A Mozart Celebration, Virgin Classics VC 7 91208-2), the choices in the early 1960s were mostly for dynamic and ebullient pieces, with the drum and double-bass adding their own adrenalin (the later Swingles did away with any instrumental section and became a purely “a cappella” group). Number after number, this is hugely exciting, entertaining and fun. The adagios from the Mozart sonatas or serenades, the Air from Haendel’s harpsichord suite in E major (track 7, although even this one moves from slow to fast), the Largo from Bach’s Harpsichord Concerto (track 9), the Prelude no. 7 from the Well-Tempered Clavier (track 13) and W.F. Bach’s “Der Frühling” (track 15) provide the occasional contrast and moment of repose, in arrangements that offer their own endless fascinations.

Indeed, the second factor is the unfailingly silky timbre of the ensemble: this is a vocal technique for singing in the microphone rather than projecting like classical singers in a huge auditorium; the purity of the sopranos even in the stratospheric reaches, the timbral softness of the men are immensely appealing: the Swingles are here the heirs of the best of the tradition of English madrigalists. Their Andante from Mozart’s 15th Piano Sonata (track 1 at 2:10) and even more their Largo from Bach’s harpsichord concerto (track 9), turning the original compositions into nostalgic and dreamy jazzy ballads, with the soprano nostalgically and caressingly doo-wopping in the stratosphere, simply leave me melting. The Swingles not only found the jazz inherent in Bach, I think they were (are) also, in their own way, very true to the essence of baroque performance practice, in which the composer’s melodic line is but a sketch on which the performer is to add his own embellishments.

Third factor is their breathtaking virtuosity – both in speeds in the fast and explosive movements, and in individual and ensemble pitch-production. The sheer volubility of their supersonic tongue-flapping in the Allegro of Eine kleine Nachtmusik (track 5), or the faster sections of the “Ah vous dirais-je maman” variations (track 2), is simply stunning. Numbers like Badinerie (track 6) or the Preamble from the 4th Partita (track 11) have an irresistible verve and dynamism. Add to that the mastery of the arrangements and the pyrotechnics of the singers’ exchanges and tossing the phrases among themselves (made necessary by the limited range of the voices in comparison to the instruments they are emulating), enhanced by the great stereo spread of the recording. This is dazzling, and none is more dazzling than CPE Bach’s Solfegietto (track 14), considered by the original group the most difficult thing they had ever done.

But, above all, there is, I think, the “quasi-scat” technique that Ward Swingle developed from the beginning. Taking up the instrumental lines, the Swingles don’t just sing anonymous “Aaaaahs” in a vocalise-fashion: they sing words in an invented language made of onomatopoeia, “ti-da-dum, pa-da-ba-da-bam”, just like you and me when we are singing under our shower. But no, precisely, it is not just like you and me. A review from Steven Schwartz of another Swingle disc, available online on the Bach-cantata website, astutely points out that the Swingle’s onomatopoeia aren’t randomly chosen, but serve to lighten and clarify the textures, while retaining a scent of the articulation and phrasing of the original instruments: “Ward Swingle’s arrangements were little miracles of translation, where the new language gave you insights into the old, and they suited the voice besides“. And they lend the music an irresistible and uplifting verve, and in the slow movements a power of fascination, that it doesn’t always have in its original form, at least not to that extent. Hearing the Swingle’s Largo from Bach’s harpsichord concerto, I can’t imagine wanting to hear it in any other form again, and the day I listen to the Andante from Mozart’s piano sonata, I think I’ll be humming, with my own croaking voice, the soprano voice from the Swingle’s arrangement.

As already hinted, the 1963 and 1964 sonics are great. The invaluable Wikipedia offers outstanding pages on the Swingle Singers, from which all the discographic information contained in this review derives, and since then Jazzhistoryonline.com has published an even more outstanding discography by Thomas Cunniffe (to which I’ve contributed some details). But for more on the (and of the) Swingle Singers, start with my own comprehensive chronological and critical discography (link soon to be provided).