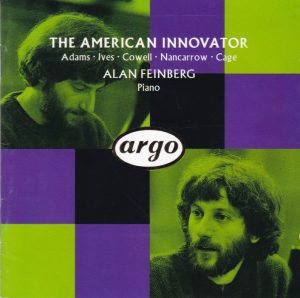 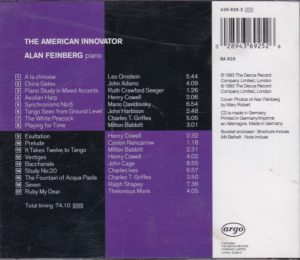 A nice concept, not always consistently carried out, but an enjoyable survey nonetheless
originally posted on Amazon.com, 6 June 2007

“The American Innovator”, mind you, not “innovators”, as if there was a particularly American compositional strain in favor of innovation – and maybe so. Possibly the sheer geographical distance from Europe made it easier for American composers (such as Cowell and Cage) to do away with European tradition, and the widespread sentiment, after World War I, that the United States was a new major power that stood on its own worked in the same direction.

Of course one can always discuss the contents of such a collection, both for what it includes and for what it doesn’t. Young George Antheil and George Crumb – two essential American innovators, in my opinion – are absent. But then to include Griffes’ Debussysms is far-fetched – unless anything that strayed from American “parlor” Romanticism is deemed innovative. What then is an “American innovator”? One of those “outsiders who consciously shun the dominant European-oriented culture” and are “isolated from the mainstream”, as the notes put it? But Ives, the unquestionable epitome of the American Innovator, could dynamite the European tradition only because he was so deeply steeped in it. And the American serialists, like Babbitt, far from shuning the European model, took on the compositional “system” of Schoenberg-Webern and pushed its limits, just as Boulez and others were doing in Europe. So maybe an American Innovator is just a non-Romantic American composer that happens to be featured on this disc – part of a series on the same label that includes “The American Romantic” (Argo 430 330-2, 1990), The American Virtuoso (436 121-2, 1992), and Fascinatin’ Rhythm (444 457-2, 1995). It offers an enjoyable selection of rarely recorded 20th century piano pieces.

It is an amusing test to try and forget the track listing and even the composers’ names, and try and recognize them from their compositions. Ornstein is easy; once you’ve heard his “A la Chinoise” from circa 1918 (for instance by Marthanne Verbit on Valentines or by Marc-André Hamelin on Hyperion CDA 67320 barcode 034571173207), you can hardly forget it. Feinberg plays it excellently, with dynamism and kaleidoscopic colors.

3. Muscular and angry short etude with strong off-beat accents, rising from the depths to the heights of the keyboard and back? Ruth Crawford’s Piano Study in Mixed Accents (1930).

5. Pointillistic serial piano with pointillistic tape sounds spaced-out stereophonically, sounding like a cliché of contemporary music from the sixties (but quite fascinating nonetheless). Would that be Babbitt? Ooops! Sorry, it was already 1970, it was Davidovsky (a Babbitt pupil, nonetheless), it was his Synchronisms No. 6, and it would possibly make a good sonic counterpoint to some Jackson Pollocks drips (or do you prefer Mondrian’s abstract canvasses?).

6. A tango. I know Astor Piazzola is not on this disc. Ah, yes, Harbison, “Tango Seen from Ground Level” (1991). Not very significant, and so much the liner notes admit, revealing that it was written for the birth of Alan Feinberg’s son – “and birth is always an innovation”. If you say so…

7. Debussy dreaminess? Sure, Griffes: “White Peacock” from the Three Roman Sketches (1915). There is more American and more innovative, I should think – even in Griffes’ own Piano Sonata.

8. Another pointillistic serial post-Webern “clonk-clonk”, without tape this time: is it now Babbitt? Yes it is (Playing for Time, written as early as 1938, when the composer was 22 and quite remarkable for its serial radicalism).

9. A Simple folk-like tune of Celtic tinge over sweet-sounding clustered chords: another Cowell (Exultation, 1919, played by Feinberg at a slower tempo than the composer but with nice dynamic shadings, lending it a sense of pensive joy rather than exultation).

10. Jagged rhythms and frenetic counterpoint, sounding like a boogie-woogie on cocaine or a player piano gone berserk? Unmistakably Nancarrow (his Prelude from 1935).

11. And again another pointillistic serial “clonk-clonk” – you’d think someone was trying to monkey the animated variation from Webern’s Opus 27. Now who other than Babbitt among the American serialists was represented on the disc? Ah ah, good ear! It is another Babbitt, and a Serial Tango to boot (It Takes Twelve to Tango, 1984).

12. Now comes something like “dissonant counterpoint” in stern mood. Is it Ruggles? Nope, a check indicates that it is “Vestiges”, one of Cowell’s “non-celtic” compositions, from 19201920, an Ivesian study in polyrhythms on a theme reminiscent of the Dies Irae, played at a moderate tempo and with atmosphere by Feinberg – but I wasn’t so far out: as Carol Oja indicates in her seminal book on the American modernists in the 1920s (Making Music Modern: New York in the 1920s – link will open new tab to listing on Amazon.com), there were strong stylistic as well as personal ties between Cowell, Ruggles and Dane Rudhyar, another American Innovator not represented here.

13. Machinistic rhythms, prepared piano sounding like a mixture between Balinese ritual music and a crazy array of struck boxes, cans, metal rods, and a possible sonic accompaniment to a sculpture of Jean Tinguely? Cage’s prepared piano of course (Bachanale, his first composition for prepared piano, from 1940).

16. Brutal onslaught in jagged rhythms. Nancarrow without the playfulness. I pass on this one. No wonder, it was Ralph Shapey’s “Seven” (1963), hardly a staple of the piano literature, even for modernist aficionados such as myself. By the way, it is supposed to be for piano four hands, but we are not told whose are the two additional hands playing on the disc: presumably Feinberg’s own in re-recording.

17. Cool Jazz in a smoked-up Club around 11 pm. Thelonious Monk, “an odd bedfellow with Babbitt and Davidovsky” indeed. Maybe it is innovative for jazz.