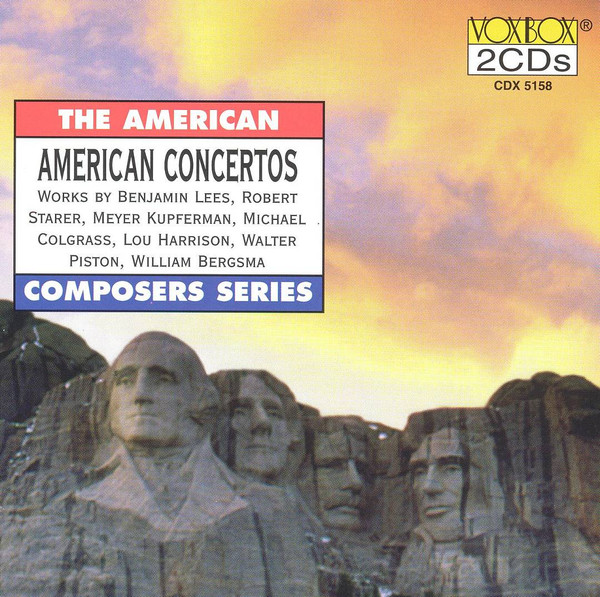 Some valuable reissues, and a fine testimony of Vox/Turnabout’s laudable involvement in American contemporary music
Originally posted on Amazon.com, 9  September 2010

Vox (and its sub-label Turnabout), the Naxos of the LP days, did great service to the music lovers not only by recording (often with second-rate peformers, but it was better than nothing) the most obscure 19th century repertoire, often in complete sets, but also by getting involved in contemporary music, especially through a valuable series called “The contemporary composer in the USA”. Thanks also to them for reissuing some of those recordings, on very coherent and appealing CD boxes (see my review of the companion “American Orchestral Music” on Vox CDX 5092, barcode 047163509223 – link will open new tab to the review on Amazon.com, pending transfer on this website).

The seven American concertos here collated were recorded between 1965 (Starer, originally released on the British label Pye) and 1977 (Colgrass). Here is how they first appeared on LP:

Bergsma on Turnabout TV-S 34428 with Morton Subotnik’s Laminations and John Eaton’s Concert Piece for Synket and Symphony Orchestra – just in case you wonder, as I did, what a “synket” is, it is a kind of synthesizer invented by the Italian engineer Paolo Ketoff. See entry on Discogs.com

Suite for Viola, reviewed in The Gramophone, February 1966)

Among them, it is striking how the concertos of Lees, Starer and Bergsma share some expressive features: they are expressionist, anguished, questing, dramatic. Lees sounds like a grim Prokofiev, with the finale having something of the sardonic fierceness of Shostakovich, and some orchestral outbursts that bring Hindemith to mind – and there is some of that in Starer’s Viola Concerto as well, especially in the fast movements. Starer’s first movement (repeated in the slow intro to the finale) is an ominous and powerfully expressive funeral lament (Honegger vaguely came to mind). Bergsma’s is the most romantic and lyrical, still in an anguished and tormented mood, and if I say here that it recalls Barber, it is not the sunny and happy Barber of the Violin Concerto but the urgent and tormented Barber of the Symphonies, Essays and Medea; but Bergsma is more relentless. Lees’ orchestration is grim and grey, but the two others offer nice ear-catching touches (like the soft, shimmering atmosphere at the beginning of Starer, and the nice interplay of viola and percussion in the same’s second movement, especially glockenspiel and xylophone – Bergsma uses also the latter, though more sparingly, as an occasional punctuation of color). Obviously these guys are serious composers, masters of their craft.

But the works would certainly have more impact if heard individually. When heard in succession, you realize how much they sound alike; they could be anybody’s concertos from those years, from any country; it doesn’t make them less good or enjoyable: but they lack a truly distinctive personality. There lies probably the difference between a “good” and a “great” composer/composition: after a bar or two you recognize unmistakably who it is. Nonetheless, my appreciation of these works has grown on repeated hearings. I had never heard of Edward Statkiewicz (Bergsma), but he plays as well as Ruggiero Ricci (Lees). Ricci is a bit raw, but it is not against the character of the music. Still, the recent recording of Lees’ Concerto 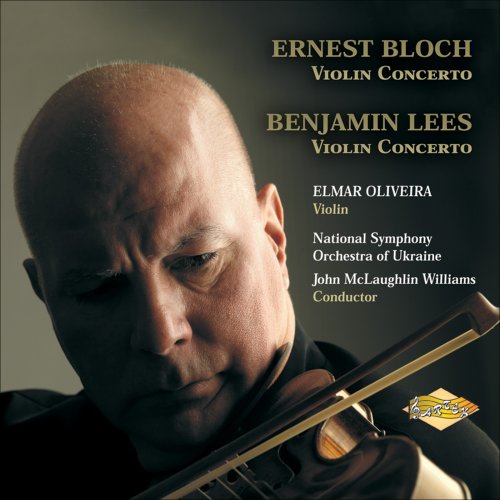 by Elmar Oliveira on Artek AR-0042-2 (barcode 661853004227) is more comfortable, thanks to its more spacious acoustics and Oliveira’s mellower tone, making it sound slightly less like “contemporary music”; interpretively, the two versions are very similar in the outer movements (but the cruder and brassier Vox recording conveys the finale’s fierce and sardonic twist better), strikingly different in the middle one, almost a scherzo in Ricci’s faster and fiecer approach (which isn’t necessarily wrong), more grandiose and implacable with Oliveira. Melvin Berger’s viola (Starer) is a bit too pinched and nasal.

So the works that stand out in some way or another are (in growing order of preference) Piston’s Concertino – the only work not for solo string instrument, written in Piston’s insouciant, saucy neo-classical style; when I write “stand out”, I don’t necessarily mean “great work”; in fact, I think that the inclusion of Piston’s work is the one mis-judgment from Vox: surely they had enough recordings in their catalog to issue a similar set of “American Piano Concertos”, and surely they could have provided another Concerto for solo string instrument; Lou Harrison’s Concerto for Violin and Percussion Orchestra – because of the percussion orchestra, the fiddler’s monophonic melodic lines and the Javanese dance inspiration (its chromaticism is not all that far from the tormented lyricism of the composers above); Michael Colgrass’ imaginative, subtle, dramatic and powerful twelve-tone homage to Vivaldi’s Concertos for three violins (how many 20th Century Concertos for three violins are there anyway? But be warned: most listeners are likely to find this one tough); and my personal favorite, Meyer Kupferman’s eclectic and polystylistic Concerto for cello and tape.

Indeed Kupferman’s eclecticism is his trademark. Like Colgrass’, it is a triple Concerto: only, here, two of the cellos are pre-recorded and aired on two loudspeakers surrounding the soloist. Asked whether the concerto would have the same impact if it was played by three live soloists, Kupferman claimed that “there is a psycho-acoustical factor involved in the use of tape”, and that “the phenomenon of a soloist sitting between two loudspeakers and performing against a background of his own pre-taped-sound… is essential to [his] conception”. Much of that of course is lost when hearing it on disc, but the pieces’ originality and its wealth of ideas endure. It is Kupferman’s homage to Bach and the baroque Concerto Grosso, and the composition opens with a Bach-inspired, brooding theme played unison by all the orchestra’s cellos. But then the one-movement Concerto (Kupferman favored that kind of architecture which he dubbed “Gestalt” form) goes through a variety of styles, in impredictable succession, intuition or even whim-led, but feeling always organic: violent orchestral outbursts that point to Alban Berg, atmospheres playing on pure tone color like Ligeti, twelve-tone gossamer orchestration, Jazz (6:45), lush, hushed, mesmerizing sonic landscapes reminiscent of Szymanowski (10:28, of breathtaking beauty), merrily neo-classical (12:43), romantically lyrical (13:53), American brassily boisterous (15:35), etc. I like the concertos un-predictability, its ear-catching instrumental and sonic imagination, and its generosity at pouring it all into one big cauldron.

The sonics are variable, sometimes a bit dry (Lees, Harrison), but never less than acceptable. Steigerwalt’s instrument in Piston’s Concertino sounds badly tuned. Good liner notes. At circa 75-minutes each, the two CDs are packed to the brim.