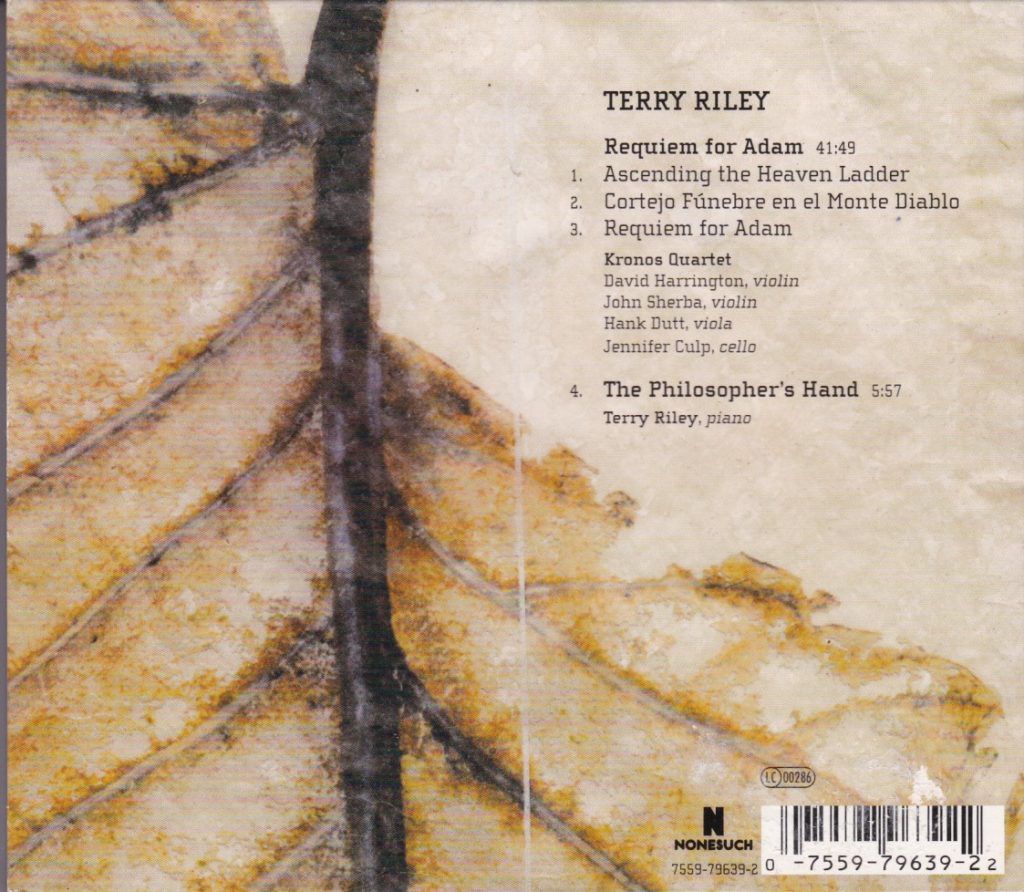 In the late 1970s and early 1980s, an immensely fruitful collaboration was initiated between Terry Riley and the Kronos Quartet, who had met at Mills College. Though the inventor of “repetitive minimalism” in 1964 with his seminal “In C”, Riley wasn’t the main proponent of that style, leaving it to Reich, Glass and later Adams in the US, and to a flock of composers in Europe: Nyman, Tavener, Gorecki, Pärt, Andriessen… In the 1970s Riley concentrated on night-long improvisations on the keyboard inspired by his teacher and mentor LaMonte Young (a good example of what it might have sounded like is given by The Harp of New Albion, on Celestial Harmonies 2 CD CEL 018/19 14018-2) and on mastering (then teaching) the art of North-Indian Raga, under the tutelage of Pandit Pran Nath.

So the encounter and prodding of the Kronos Quartet came at the right time for Riley: time to return to Western traditional notation and theWest’s time-hallowed instrumental ensemble, and infuse them with a wealth of fresh and new musical ideas. The collaboration resulted in a series of wonderful string quartets, completed between 1980 and 1986, paying their debt not only to North-Indian vocal music but also to North-American Indian Folk-music: they were recorded on  Cadenza on the Night Plain, Gramavision R2 79444 (1985-88) and Salome Dances for Peace, Elektra Nonesuch 9 79217-2 (1989). Indeed Riley’s compositions for string quartet are closer to the kind of World Music the Kronos Quartet soon became associated with than to repetitive minimalism. That doesn’t make them “simple” pieces though, although they are highly approachable and immensely engaging, dance-like and dynamic, with a wealth of melodies and instrumental colors.

It was a sad event that prompted Riley back to the medium, ten years later, in 1998: the sudden death of Adam, the son of the Quartet’s first violin, David Harrington, of a heart failure, in 1995, at 16. In the composer’s words, “this tragedy moved me to want to resolve the sadness I shared with his family in a string quartet memorial“.

Obviously, the quartet-requiem has none of the playfulness and dance qualities that made Riley’s previous essays in the genre so appealing. Lasting 42 minutes, it has three movements. “Ascending the Heaven Ladder” is first slow-moving and dirge-like (with some accents at the beginning that almost recall Beethoven’s last quartets) then increasingly agitated, grim and bleak. What remains from the earlier quartets is Riley’s superb invention in tone color, an example of which being the otherworldly harmonics played at 8:30 in that first movement, when the agitated mood recedes.

The 2nd movement, “Cortejo Fùnebre en el Monte Diablo” (Funeral procession at Mount Diablo – this is the site in California where Adam Harrington died) is pop-music oriented, with the addition of a rackety and heavily pulsed and drummed soundtrack of electronic music. Thereupon develops a powerful, dogged and grim funeral march. The finale and longest movement , “Requiem for Adam“, starts off furiously and vehemently, with a drone-like accompaniment in glissandos that sounds like the attack of the bee-hive. It alternates between that furious and agitated mood and (introduced after 6 minutes) more elegiac and sorrowful moments (and always Riley’s striking use of glissandos, no doubt inspired by North-Indian vocal techniques, and flute-like harmonics in the elegiac moments), ending in an irresistibly moving way with mesmerizing downward glissandos (tears? sighs?) soon played on harmonics over a plaintive chant on the cello. Unforgettable.

The disc is rounded off by a gentle, soothing, five-minute piano improvisation by Riley, in the memory of his master at North-Indian music, Pandit Pran Nath, who had attended Adam Harrington’s funeral service and passed away a year later. His – according to David Harrington the softest hand he had ever held – is “The Philosopher’s Hand”.