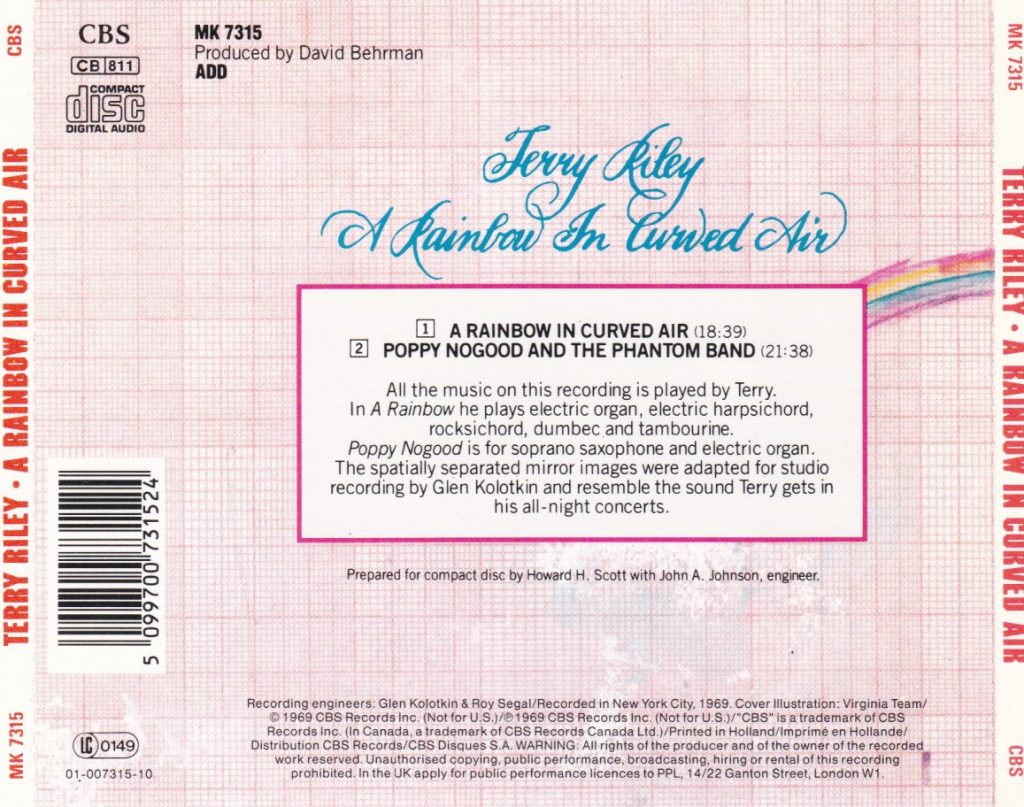 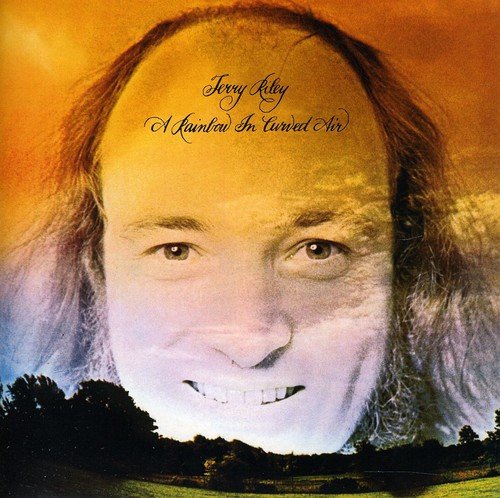 Originally released in 1969 on Columbia Masterworks MS 7315 (link to LP’s entry on discogs.com)

The point of view of a listener of classical music: minimalist, entertaining, and fairly inconspicuous
Originally posted on Amazon.com, 12 July 2010

The point of view of a listener of classical music:

Riley at his most typically “minimalist”. With his seminal “In C”, Terry Riley was veritably, in 1964, the inventor of “minimalism” in music, or rather what I prefer to call “repetitive music”, to distinguish it from this other kind of minimalism exemplified by Morton Feldman or, in Europe, Scelsi, Sciarrino or Lachenmann. The latter is in many ways more “minimalist”, being usually slow moving and based on truly minimal musical events, long-held single notes, at the threshold of silence. On the other hand “repetitive music”, while also based on basic and minimal cells doggedly repeated, can be, and usually is, very busy, thanks to the piling and tiling of those cells and “their rhythmic out-of-syncing”. Though he invented it, Riley wasn’t the main exponent of that kind of minimalism; he let that to Reich, Glass and Adams in the US, and a flock of composers in Europe, Nyman, Tavener, Pärt, Gorecki, Andriessen, Ten Holt etcetera. Riley moved on to other stuff, night-long keyboard improvisations in the wake of his teacher and mentor LaMonte Young (an example of such improvisations is given by The Harp of New Albion, on Celestial Harmonies 2 CD CEL 018/19 14018-2), North-Indian Raga under the tutelage of Pandit Pran Nath. Riley’s fascination both for North-Indian art music and North-American Indian folk music has informed the beautiful string quartets he wrote in the 1980s for the Kronos Quartet.

Here, in 1969 (the disc’s release year; in fact the compositions date from 1967 – Poppy Nogood – and 1968 – Rainbow), five years after “In C”, it is still repetitive music, and a style closer to new age and progressive rock than to classical music. Well, young people (o would you hand me my cane so I can get up outa my rocking chair?), I had my days of progressive rock in the late 1970s and early 1980s, plenty of Robert Wyatt and Soft Machine, Yes, Genesis, The Lounge Lizards, Brian Eno, yep, remember all these guys. The arrival of disco and punk ended it all for me, but this here arouses nice memories from a distant past. “A Rainbow in Curved Air”, mostly for keyboards, sounds like a wild and exuberant keyboard improvisation (which it probably is); “Poppy Nogood and the Phantom Band”, for soprano saxophe and electric organ, is more brooding and ominous, and very atmospheric. It reminds me of the music of a French saxophone ensemble, Urban Sax (still have the LP somewhere, though the turntable is long broken; man, I see that they are still around! How hold might THEY be? see their entry on Wikipedia, link will open a new tab). All this is fun, entertaining, fairly inconspicuous, and “Rainbow” still today will make good background music for your cocktail party.

My favorite in Riley’s output remains the string quartets he wrote for and with the Kronos Quartet in the 1980s: see my reviews of Cadenza on the Night Plain on Gramavision R2 79444 and Salome Dances for Peace on Elektra Nonesuch  9 79217-2.

TT is LP length : 40:30. I have the early European CD release from when CBS was not even yet Sony, which came with hardly any liner notes, just a utopian blurb which I assume was written by Riley (“And then all wars ended… The concept of work was forgotten..” Sweet dreams, Terry), which I suppose reproduced the original LP as it was.