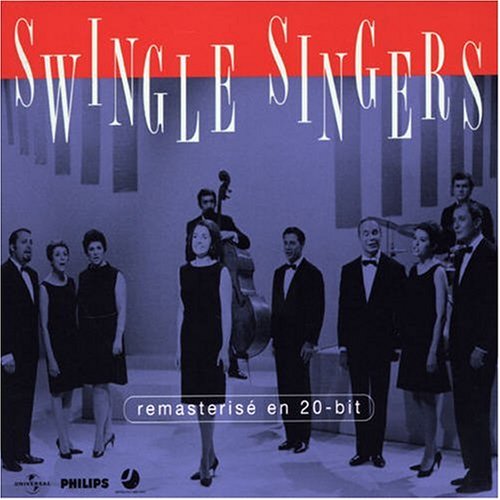 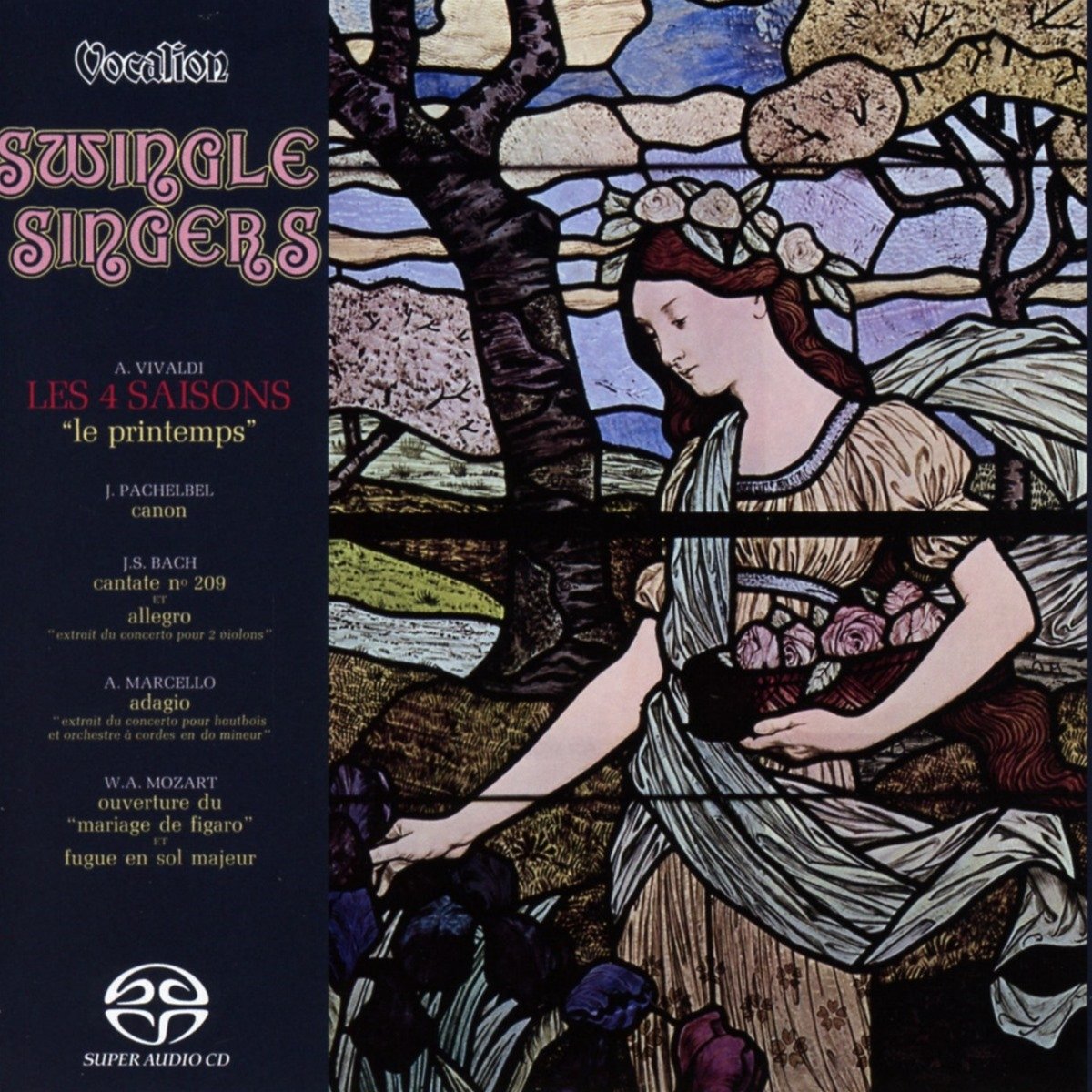 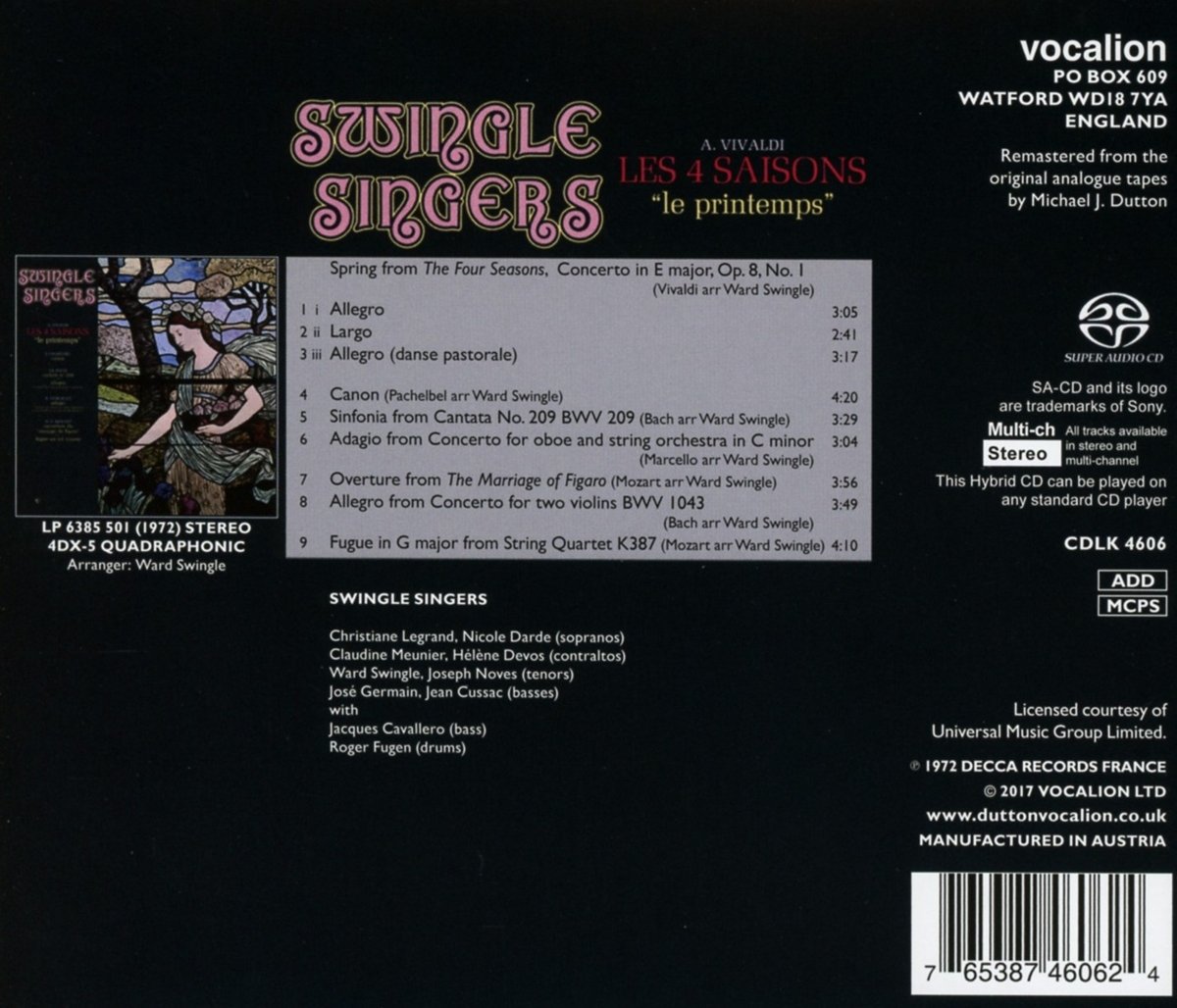 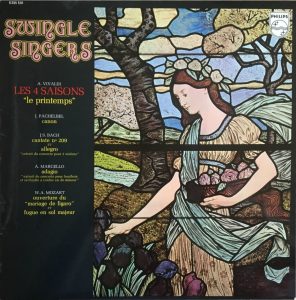 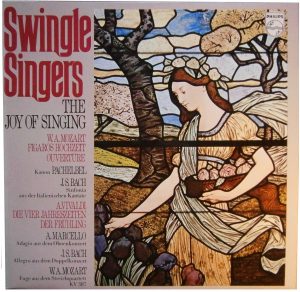 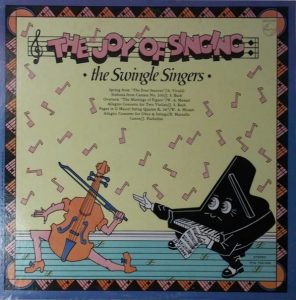 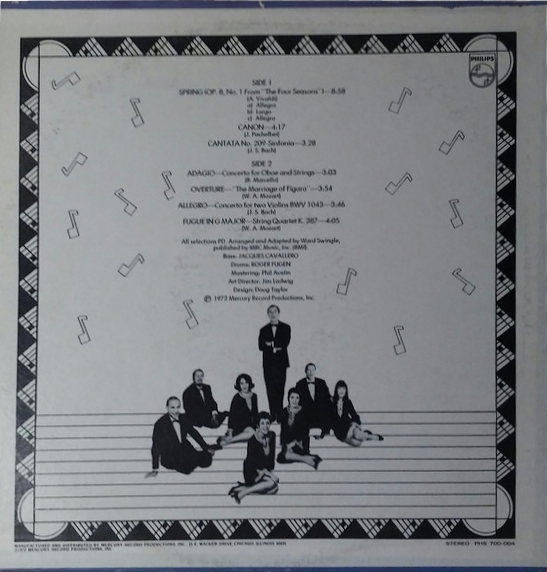 I knew the Swingle Singers and had two or three of their CDs in my collection, but it is only recently that I decided to explore more systematically their recordings, in the context of a “transcription” spree that was initiated – or rather, rekindled – by the chance listening to a CD of transcriptions by the London Brass, Carmen: Bold As Brass. My love of transcriptions is older than that, though, and if I recall it was initiated both by the CD of the Four Seasons played by the Japanese New Koto Ensemble (the Koto is a kind of traditional Japanese cither, The Four Seasons, Water Music Suite, Royal Fireworks Suite (New Koto Ensemble of Tokyo)) and by Bach’s Goldberg Variations played on accordion by Stephan Hussong on Thorofon CTH 2047, barcode 4003913120472 (be patient for my gigantic Goldberg Variations comparative discography).

The fascination of transcriptions is that they enable you to hear the old warhorses in new timbral guise that is often ear-catching, and sometimes even illuminating. It’s like your wife showing up with a new sexy lingerie: new thrills to the old routine. But there is more even than that to the Swingle Singers. As I’ve contended in my other reviews, the special fascination of the Swingle’s arrangements and realizations derives, I think, from two factors: first, they elevate to the status of high art what we all do, inadvertently, without even thinking about it, in a very rudimentary manner, walking on the street, washing the dishes, ironing or vacuuming – and, of course, showering: humming our favorite tunes. Second, they return instrumental music to its very essence and origin: the human voice, this essence in the name of which it is expected of instrumentalists to make their instrument sing, even when their acoustical properties are radically different from those of the voice, like the plucked-string-harpsichord or the struck-string piano. 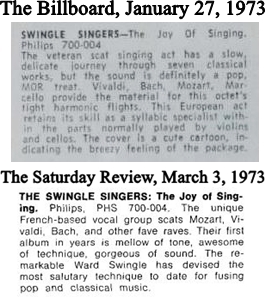 “The Joy of Singing” was the title of the US edition, in 1973, on Philips PHS 700-004, with a different cover. It is sung by the “original” French group formed by Ward Swingle (in fact only four members remained from the group that recorded the chart-making “Jazz Sébastien Bach” ten years before, soprano Christine Legrand, mezzo Claudine Meunier, tenor Ward Swingle and bass Jean Cussac) and it was a year before they disbanded (isn’t it sadly ironic that the last album of the French group was titled “Bitter Ending”, a composition by the French jazzman André Hodeir?).

This disc is great. It goes from dazzling to lovely. Dazzling? The way the Swingles trill and play the appoggiaturas – pardon, the bird chirping – in the first movement of “The Spring”, or again how the men tremulate (tremolo) at 1:32 in the same movement, underpinning the virtuosic volubility of the exchanges between the two solo violins – pardon, sopranos. Awesome. Or the Marriage of Figaro Overture. Why was it never done like that at the opera? It would be great – and think about cost-cutting! Lay off the 50 instrumentalists and hire the Swingles!

Lovely ? When the sensuously caressing soprano voice unfolds over the silky tapestry provided by the others, bringing out emotions from the depths, as in the 2nd movement of Vivaldi’s Spring, or in the Adagio of Marcello’s Oboe Concerto. Enrapturing.

And the Pachelbel Canon. You know, we “serious” music lovers look down on the popular and syrupy hits like Albinoni’s spurious “adagio” (in fact the composition of the 20th Century musicologist Remo Giazotto) or Pachelbel’s canon ; that (we view it) is classical music for the ignoramuses, muck served to the pigs. We pinch our noses and gracefully taste at more subtle or elaborate meals. But this here, as sung by the Swingles, is irresistibly lovely. It must be the pig in me reacting.

Some criticisms? Sure! Why only 32 minutes of this? In LP days, OK, maybe, especially if you wanted great sonic quality, so they needed not to clog those grooves. But in CD era? I simply don’t get the point of these “original jacket collection” type of reissues. What’s the point of getting 30 minutes on a CD when you can pair two LPs and give us 60 or more? Just for getting the glands of nostalgia of the older, LP-raised generation to salivate? And there aren’t even any liner notes! I’m not listening to this for nostalgia, but because it spurs my enthusiasm, now, here and today, and I want more of it per CD! Why hasn’t Universal done here what Polygram did in the early 1990s with their pairing of the two Jazz Sébastien Bach LPs of the Swingles (link above) and their “Going Baroque” and “Anyone for Mozart” albums, reissued on CD as Anyone For Mozart, Bach, Handel, Vivaldi?? This is really milking the cows – or the sows, maybe.

And a regret: hey, Swingle Singers, wherever you are, hope you’re reading this: you’ve been in existence now for nearly 50 years, and you’ve managed to record ONLY the Spring from Vivaldi’s Four Seasons ? C’mon you guys, stop idling! I want the complete Seasons! I want the complete concertos of Vivaldi! Beethoven’s Symphonies, Scarlatti’s 555 sonatas and Soler’s Fandango. I want the whole repertoire sung by you! If I’m lucky I’ve got 50 more years to go, so you can do it! NOW GET TO WORK!