dating of the reissue based on an online catalog of Universal Austria, consulted in December 2018 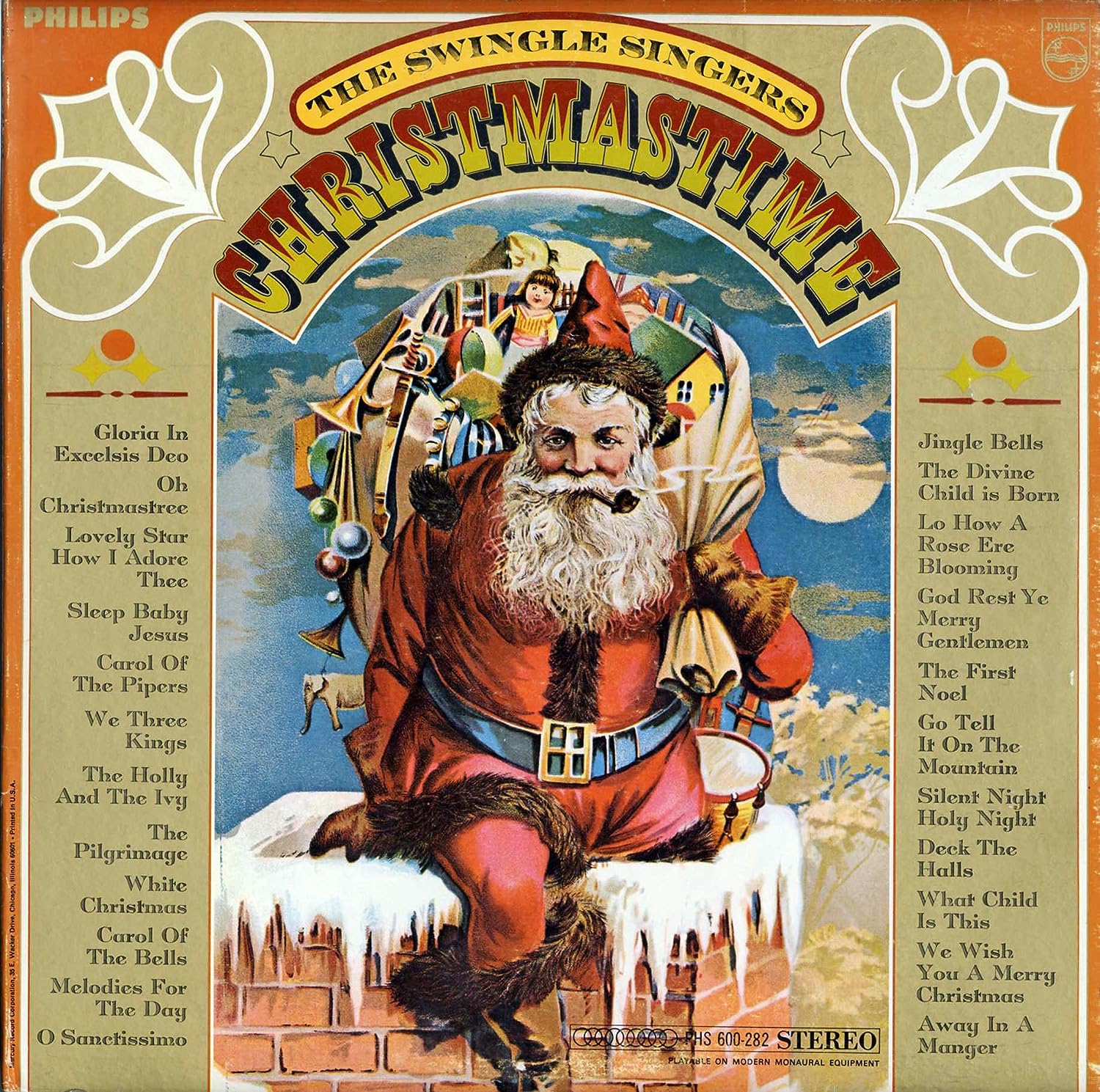 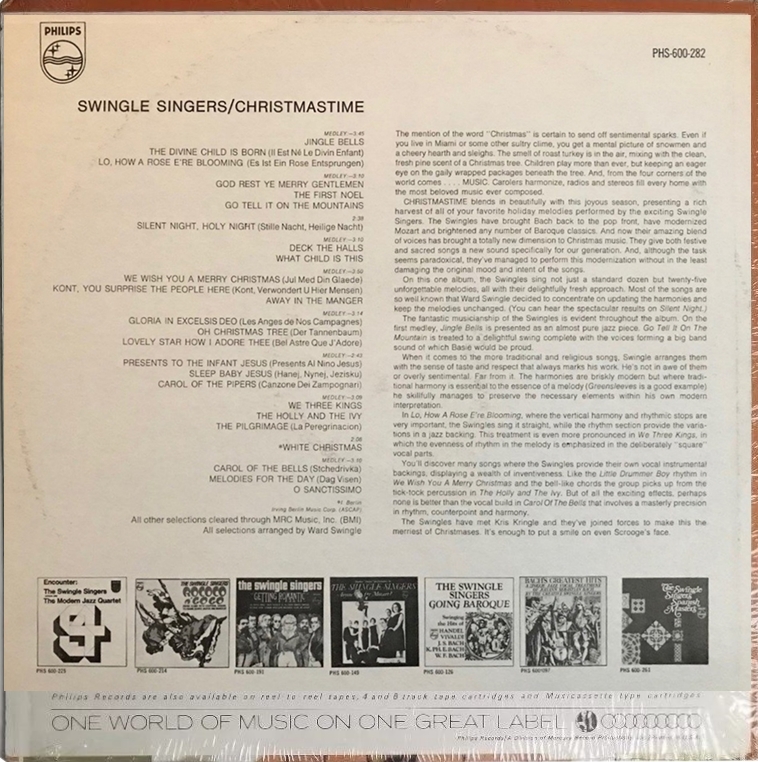 February 1968 (some tracks recorded in September 1967 – dating from Tom Cunniffe’s Swingle Singers discography at Jazzhistoryonline.com – link will open new tab) and although some of the members had changed since the beginning, the Swingle Singers were still the Paris-based group founded by Mobile, Alabama-born Ward Swingle in 1962, in which he was the only non-French member. They were still (and remained throughout their Paris period, until 1972) a purely scatting group, one who’s unique style was to perform vocal but wordless renditions of instrumental pieces of Classical music (Bach, Haendel, Vivaldi, Mozart, The Romantics…), with only the underpinning of a Jazz rhythmic section (double-bass and percussion). Their Christmastime album was originally issued in France  under the title “Noëls sans passeport” on Philips 844.858 BY, in the US on Philips PHS-600-282 with a different cover, and in Holland with same label number as in France but different title and cover, “Christmas with the Swingle Singers“

(links to discogs.com). It represented in many ways a foray into new territories: first because it was the first to tackle non-Classical material – here traditional Christmas songs and a few with credited composers, like Irving Berlin’s “White Christmas”, and second because for the first time they tackled not instrumental music but songs. But they remained true to the style invented by Ward Swingle, in that his arrangements turned those into “vocal-instrumental” music,

Later, after the disbandment of the Paris group and the founding by Swingle of a new, London-based group (alternatetely called Swingle II, The New Swingle Singers or The Swingles, before reverting to The Swingle Singers), they would become a more decidedly cross-over ensemble, adding to their repertoire a lot of pop-music hits of the day, Jazz standards, Ragtimes, Broadway, film music, traditional. But more important, they would sing the lyrics, and even, in some of their albums from the 1970s, add lyrics onto arrangements of instrumental pieces (“Rags And All That Jazz“, CBS 1975, reissued on CD on Swing Sing, and “Swingle Skyliner” on EMI/Moss Music Group 1980, not reissued on CD), pursuing the style called “vocalese” brought to a perfection in the late 1950s by the Henricks-Lambert-Ross Jazz trio, and translated in French by the Double Six de Paris, an ensemble of which Swingle had been a member. In my opinion, by so doing they lost part of what made the unique originality of the Swingle Singers. They became just one fine A Capella vocal octet among others, and never more so than on their record of “English and French Part Songs” (RCA 1976, never reissued on CD) – no arrangements here.

The Christmas songs arranged here (principally in the form of medleys, the only exceptions being Irving Berlin’s “White Christmas“, and “Silent Night” / “Stille Nacht, Heilige Nacht” – actually not a traditional song but one composed in 1818 by the schoolmaster Franz Xaver Gruber on lyrics by Father Joseph Mohr) originate from around the world – or almost (hence the French title, “Christmases without a passport”): USA, France, Germany, England, Norway, Holland, Spain, Czechoslovakia, Italy, Argentina, Russia, Denmark. So you get to hear the tunes of some of your standards – Jingle Bells, Il est né le divin enfant, Silent Night, Oh Tannenbaum (O Christmas Tree), Es ist ein Ros entsprungen (A Spotless Rose/Low How a Rose E’er Blooming), The Holly and the Ivy, We Three Kings – and a few more obscure ones.

That said, other than to the avid Swingle Singer collector, I’m not sure the CD is of great interest. The sonics are excellent, but the TT is LP-tailored (and even there…) and a shamefully short 31:15. Really Universal (who held the rights to the Philips catalog when the CD was released, part of a series of 11 documenting the 11 albums recorded by the original Paris-based ensemble for Philips) was making too conspicuous an effort to milk us cows, and the Christmastime program could and should have been paired with the Swingle’s 1968 exploration of American vernacular music, “American Look“. Then, for those approaching the disc from a Christmas perspective, the absence of lyrics might be really detrimental. As nice and sweet as it is to hear the Swingle Singers humming those tunes, if it is for listening on December 25 around the Christmas tree I presume the family would like the words as well – unless it is an adept of the “Music minus one” approach – those recordings of the orchestral accompaniment of concertos or arias, to enable the aspiring soloist to practice – oh, yes, it is called Karaoke now…

But note that the album HAS been reissued, in 1998, Swingle Singers Christmas Album, Spectrum 554-755-2 (a label of PolyGram), with the addition of 10 tracks (out of 14) from a later Christmas album of the ensemble, the 1986 Polydor “Christmas” (LP Polydor POLD 5206): a well-hidden secret, that even the Swingle Singer discographer Thomas Cunniffe from Jazzhistoryonline dot com didn’t know about. With a TT of 61 minutes, a shame really that they left out the four other tracks from the Polydor album, but then it is better than nothing, and certainly twice as more generous as this one. By 1986, the Swingle Singers were more “mainstream” in their approach: they sung the lyrics (in some songs with accompaniment of drums and synthesizer/electric keyboard – which makes ME cringe, and I much prefer when the Swingles are purely a cappella, which fortunately they do on most tracks – and/or with discreet accompaniment of double-bass and jazz drums as they did in their Paris period).

Good news, because a number of the Swingle Singers’ Christmas albums are hard to find: “Swingle Bells” for EMI/Moss Music Group in 1978, a program very much overlapping this one (but with lyrics sung), was (to the best of my and Jazzhistoryonline’s knowledge) never reissued on CD. Some of the contents of Polydor’s “Christmas” were reprised on “Swingle Singers The Christmas Album”, 1987, on the group’s own label, Swing CD3, but it’s hard to find. The two next ones are more easily availalbe, “The Story of Christmas” from 1994 (originally released on their own label, Swing CD 8, reissued by Primarily A Capella, The Story of Christmas), and The Swingle Singers …Unwrapped, a Christmas album in all but name, from 2004, on Signum Classics. But now the Spectrum reisue is the best offer, as far as contents go, because you get the best of both worlds, Swingles dee-duming and singing.