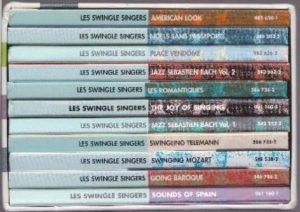 The music is rich, but the timings are poor
Originally posted on Amazon.com, 9 April 2011, updated for re-publication December 2018

Born in Mobile, Alabama, tenor Ward Swingle moved to Paris after the war to study the piano with Walter Gieseking, and was in the early 1960s one of the founding members, with Mimi Perrin, of the famous jazz vocal group Les Double Six de Paris. He then formed his own group, performing as session singers mainly doing background vocals for singers like Charles Aznavour and Edith Piaf, or some jazz vocals for Michel Legrand. As a warm-up and sight-reading excercise the eight session singers picked up Bach’s Well-Tempered Klavier and found the music to have a natural swing. In December 1962 they recorded their first album, “Jazz Sébastien Bach”, as a present for friends and relatives. Many radio stations picked it up which led to the group recording more albums and winning a total of five Grammy Awards (I’ve borrowed most of this from the Ward Swingle entry on Wikipedia).

The Paris-based Swingle Singers was in existence from 1962 to 1973 (with only four members from the original group remaining at the end, one per tessitura). After they disbanded, Swingle moved to London and formed a new group, first called Swingle II. He retired in 1984 but kept a position as musical advisor and sometimes arranger for the group which had re-adopted the name of Swingle Singers. He passed away in 2015 – after I had originally posted this review.

The Paris Swingles recorded 14 and a half LPs between their chart-making “Jazz Sébastien Bach” from 1963 (published in the US under the rather anonymous title “Bach’s Greatest Hits”) and their last in 1974, a composition by the French jazz composer and musicologist André Hodeir – how ironic that it should have been titled “Bitter Ending” (not reissued on CD). Among those 14.5 was the soundtrack composed by Swingle for an Italian film from 1967, “Operazione San Pietro”, which has been reissued on CD, Going Baroque Operazione San Pietro – not to be confused with their “Going Baroque” album from 1964. And, in October 1968, there was also Berio’s Sinfonia, written for them (or at least with them in mind; it is dedicated to Bernstein) and conducted by the composer himself at the head of the New York Philharmonic for Columbia, and the .5 is for French composer Michel Zbar’s “Swingle Novae”, one side of an LP published on the obscure label Barclay/Inédits de l’ORTF in 1973. So if you take out that, the movie and the Hodeir (there was also a 7″ 45rpm with two songs based on film music by Philippe Sarde, and their live performance – presumably the premiere, from October 1969 – of the completed version of Berio’s Sinfonia, with the added fifth movement, was published on the South-West German radio’s own label), there remains 11 albums (including “Place Vendôme”, the Swingles’ collaboration with the Modern Jazz Quartet from September-October 1966) and this is what you get in this box.

Philips/Universal (the label is sometimes dubbed Emarcy on the European Amazons, which is the jazz branch of Mercury) has reissued those LPs “straight” in the early 2000s and collected them in this box in 2005, aimed no doubt at getting the glands of nostalgia of the baby-boomers to salivate. The discs can also be found invididually, and ten out of the eleven have been gathered in pairs (the odd-disc out being Christmastime / Noëls sans Passeport). The problem is the timings. The LPs were already very short, even by LP standards: many of them even under 30 minutes, and not far above for the rest. So really the content of those 11 albums could have fitted on 5 CDs. And it’s not like the original albums had lengthy liner notes that would justify the straight reissue; in fact the liner notes are close to non-existent.

All the more frustrating, as the music is great and uniquely capturing. I’ve reviewed all those CDs (plus more by the later Swingles), and I’ve written that the special fascination and thrill provided by Ward Swingle’s arrangements and the Swingle Singers’ realizations comes from a number of factors: first, the pleasure of any transcription, enabling you to hear the old warhorses in a new, ear-catching and sometimes illuminating timbral guise; it’s like your wife showing up in a new sexy lingerie: new thrills added to the old routine. But there’s also more to the Swingles than this general appeal of all transcriptions. I’ve contended that the Swingles elevate to the status of high art what we all do, withouth thinking about it and in a very rudimentary form, walking the dog, washing the dishes, ironing or vacuuming – and, of course, under the notorious shower: humming our favorite tunes. And the Swingles are to our humming what Picasso is to your kid’s drawing. And I’ve also opined that by so doing, the Swingles return instrumental music to its very origin and essence: the human voice – since, presumably, all these great composers, Bach, Vivaldi, Mozart, Chopin, Beethoven and the others first hummed these tunes before committing them to the music sheet.

Anyway, the matter of timings and price is a purely theoretical one now, as the box has become exceedingly rare, and very expensive when offered. Individual releases or two-CD sets can be found, sometimes expensive, sometimes cheap; you’ve got to be patient and jump on the occasion.

Here is the chronological list of those 11 CDs, with product links to the individual entries. For more on and of the Swingle Singers up to date, see my comprehensive discography (to be posted).

3. “Swinging Mozart” (1965, published in the US as “Anyone for Mozart?”), CD Philips 548 538-2 (2001). That and “Going Baroque” were gathered in one of those pairs of CDs mentioned above, Philips 586 154-2 (see reviews of individual CDs for details). But more convenient again was  Phonogram’s 1986 reissue on a single CD  under the title Anyone For Mozart, Bach, Handel, Vivaldi?, Philips 826 948-2, although with the incomprehensible loss of one Haendel track from the “Going Baroque” album.

4. “Getting Romantic / Les Romantiques” (1965), CD Philips 586 736-2 (2002). Note that the CD gives a copyright year of 1967 (leading discographer Thomas Cunniffe on jazzhistoryonline.com to consider it the Swingle Singer’s 6th album, after “Swingling Telemann” and “Place Vendôme”), but it can’t be the year of recording, since the album was released and reviewed in the United States at the end of 1965.

6. “Place Vendome“, the Swingles’ collaboration with the Modern Jazz Quartet, recorded in September and October 1966 and released in 1967. First CD reissue in the West was in 1989 on Philips 824 545-2, “all tracks newly remixed digitally from the original tapes under the personal supervision of John Lewis on October 2, 1988 at Phonogram Studio in Tokyo”. Digipak reissue as part of this Universal series on Philips 982 626-2 (2005), and I don’t know if they use the same transfers. There was a simultanous release by Universal France as traditional redbook CD (e.g. non digipak), Philips 0602498305560. My review indicates a number of other reissues, some Japanese, some augmented of tracks from other albums of the Paris Swingles. The Jazz is what you expect from the MJQ: elegant, gentle, pretty, non-aggressive, agreeable – but not extremely challenging, and the demands placed on the Swingle Singers are light-years under the level of virtuosity they were capable of.

9. “Christmastime” (1968). Digipak CD reissue Philips 548 303-2 (2000). “Christmastime” was the title of the US LP edition; it came out in France as “Noëls sans passeport” (without passport, because it gathered Christmas songs from the USA, France, Germany, England, Norway, Holland, Spain, Czechoslovakia, Italy, Argentina, Russia and Denmark), and in The Netherlands as “Christmas with the Swingle Singers”.

Tom Cunniffe, in his Swingle Singers discography on Jazzhistoryonline, gives the recording dates as September 1967 and February 1968, which would place it before Jazz Sébastien Bach vol. 2, but label number indicates that it was released after. Obviously. Philips waited for Christmas. First time the Swingles tackled non-classical repertoire (they would further their exploration into the American vernacular with their next album, “American Look”), but, unlike the later Christmas albums of the London-based Swingle Singers, they remained true to their unique wordless scatting style.

This is the one from Universal’s series of 11 that wasn’t gathered with a companion in a twofer.

Here comes a rarity from 1970, left out by Philips from their CD reissues and no wonder, even Ward Swingle, with whom I had an exchange of correspondence in 2012 thanks to Tom Cunniffe, had entirely forgotten about it: “Mon Enfance est un rubis” and “Laurence”, two songs by Philippe Sarde (lyrics Eddie Marnay) based on his soundrack for the film by Edouard Molinaro “L’Amour en croupe”, Philips 6009 103 (7″, 45rmp). Well – not that it absolutely deserves to be remembered, except by Swingle Singers (or Philippe Sarde)’s completists.

11.  “The Joy of Singing” (1972;  originally published in France with the title “Les 4 Saisons”; the CD reissue retains the Amerian title and the French cover). Why the gap of three years with “American Look”, I don’t know. Paired with “Sounds of Spain” in Philips 981 160-0. It’s the only one to have been reissued also in SACD form, Vocalion CDLK 4606 (2017). Details and links with the review. I haven’t heard the SACD.