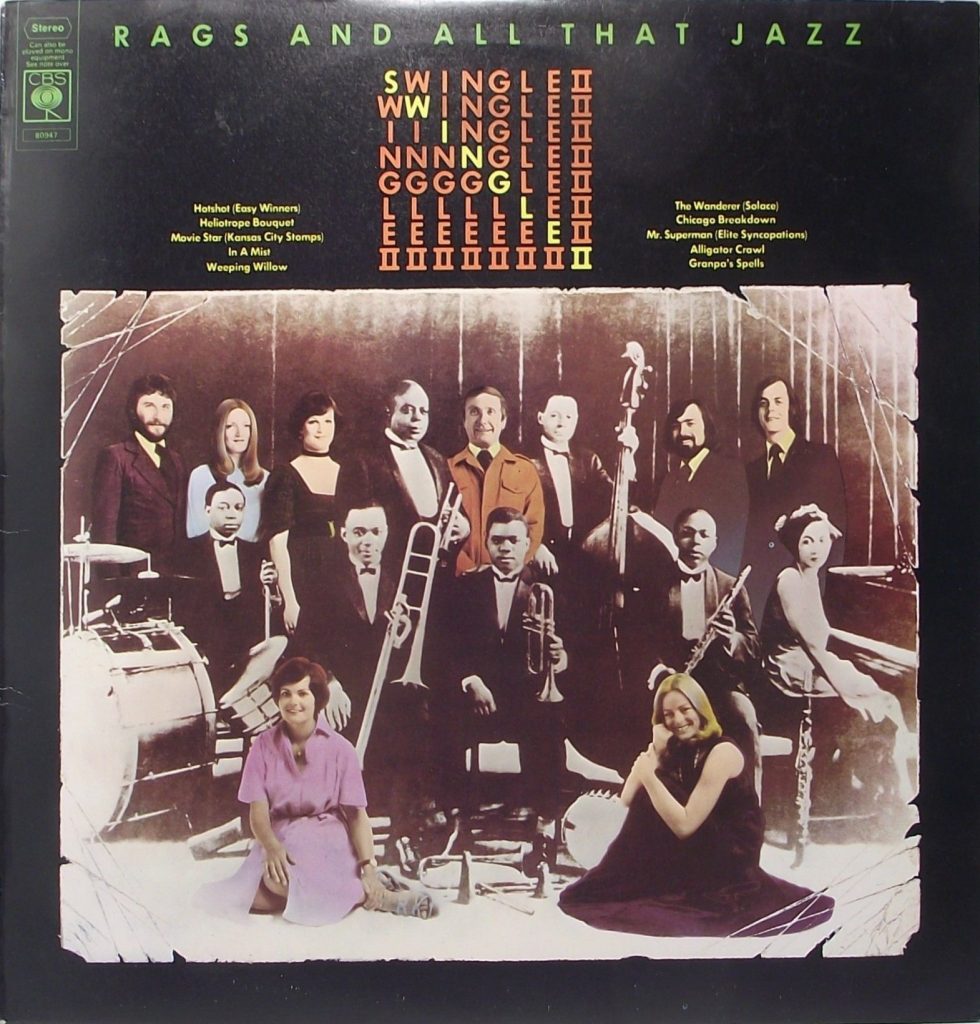 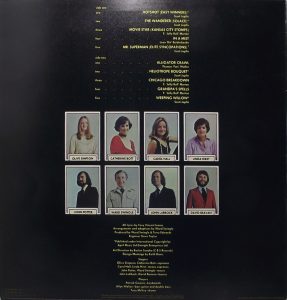 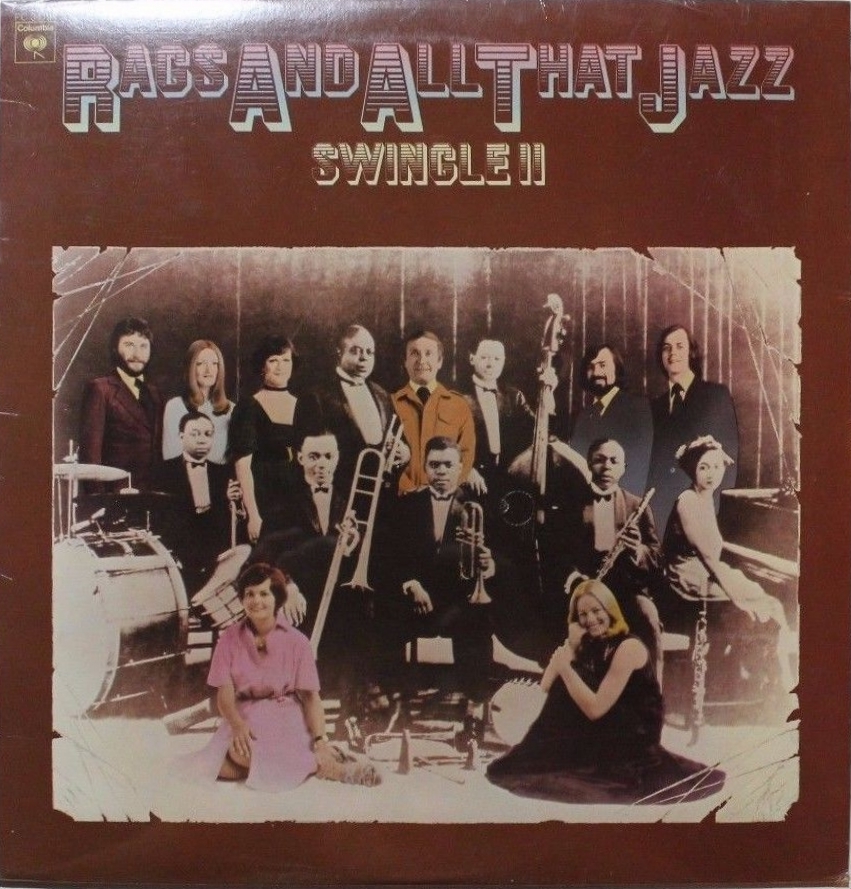 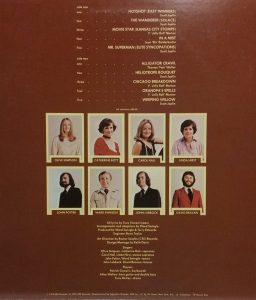 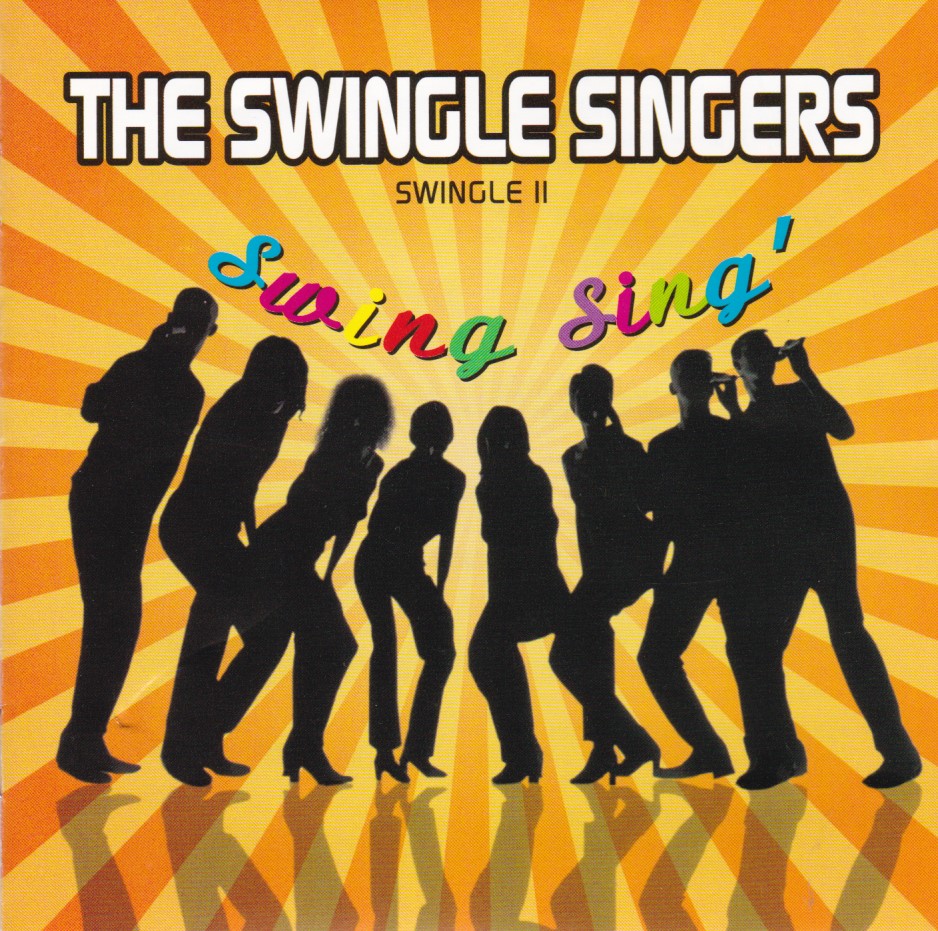 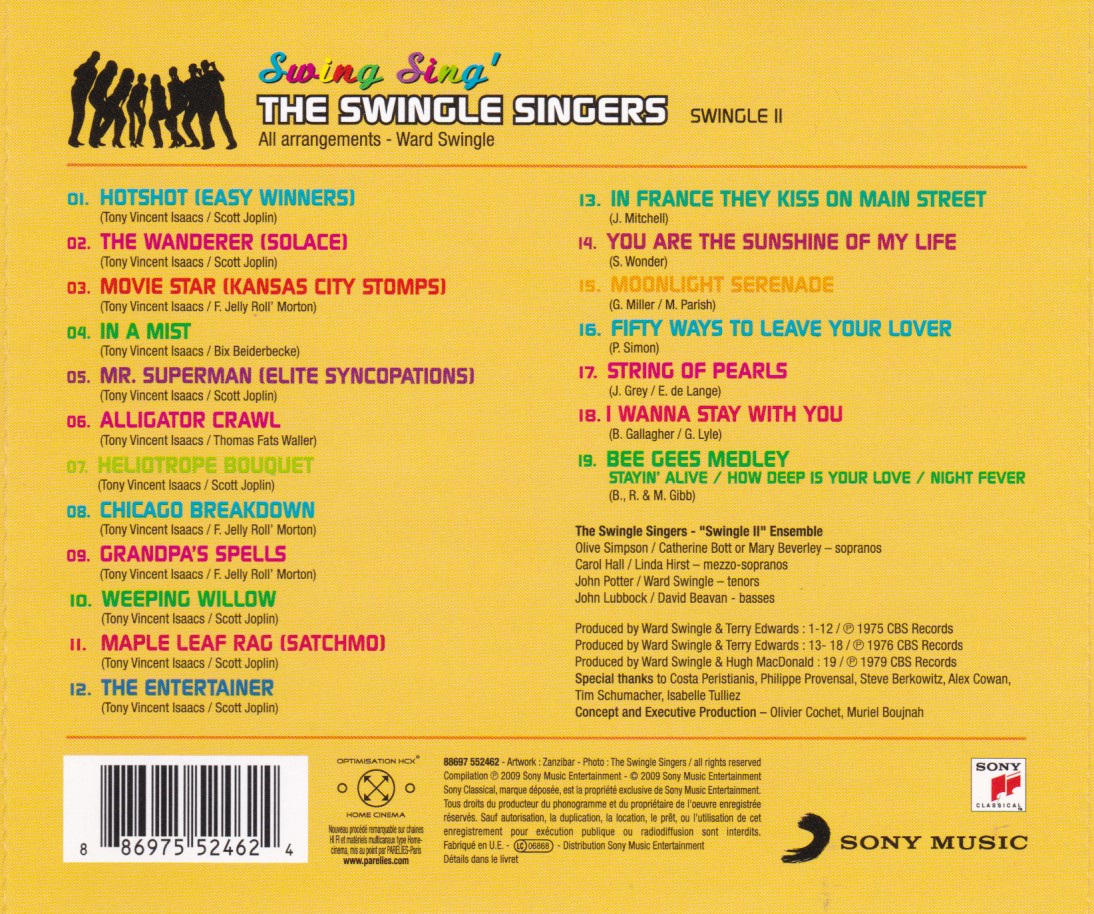 The London Swingle Singers not swingling anymore, but in their imitation act of Lambert-Hendricks-Ross
January 2, 2019, based on my 2011 review of the CD “Swing Sing” (see link above)

In an interview given on the Norwegian TV in 1976, Ward Swingle reminisces on the reasons why he disbanded the original, Paris Swingle Singers in 1973 (see at 2:50): not wanting to get pigeonholed in one style and one approach, wanting to try new things (my words). The process of change had already started in the 1969 album  American Look, in which Swingle and his ensemble no more tackled the great hits of Bach, Mozart, Handel, Vivaldi or Telemann, but the American vernacular, country dances, negro spirituals, patriotic songs, Gerswhin and Foster. But even there, they remained true to the style invented by Swingle in December 1962 (Jazz Sebastian Bach), scatting and vocally dee-dumming pieces with a jazz rhythmic underpinning of double bass and drums, even when the pieces they sung were originally not instrumental, but vocal.

So, after the disbandment of the original group, Swingle moved to London and formed a new ensemble with young British singers, first called (as they switched recording label from Philips to CBS/Columbia) Swingle II. But more fundamental than just a change of personel, Swingle totally changed his approach to arrangements. First sweeping change, they now sung the lyrics. Then, after a first (and lovely) album devoted to Renaissance music in 1974,  Madrigals, CBS 80147, sung (with lyrics) very “straight” but now with pop-music rather than jazz instrumental accompaniment (the US title says it even better: “Love Songs for Madrigals and Madriguys”, Columbia Masterworks M 33013), they tackled the great hits of the day in pop music, film music, musicals (Words & Music, CBS 80554, 1974) and then, with Rags and all That Jazz here, the ragtimes of Scott Joplin (there were already two of them on “Words & Music”, both reissued on the CD “Swing Sing”, see reference in heading), the early jazz of Bix Beiderbecke, Jelly Roll Morton, Fats Waller.

And, here, Swingle did, really, the opposite of what he had invented back in 1962: instead of de-dumming instrumental music and instrumentalizing vocal music, he had lyricist Tony Vincent Isaacs write lyrics on pieces that were originally of instrumental music, in the manner of the Lambert-Hendricks-Ross trio or The Double Six of Paris, with whom Swingle had begun his singing career in the early 1960s. 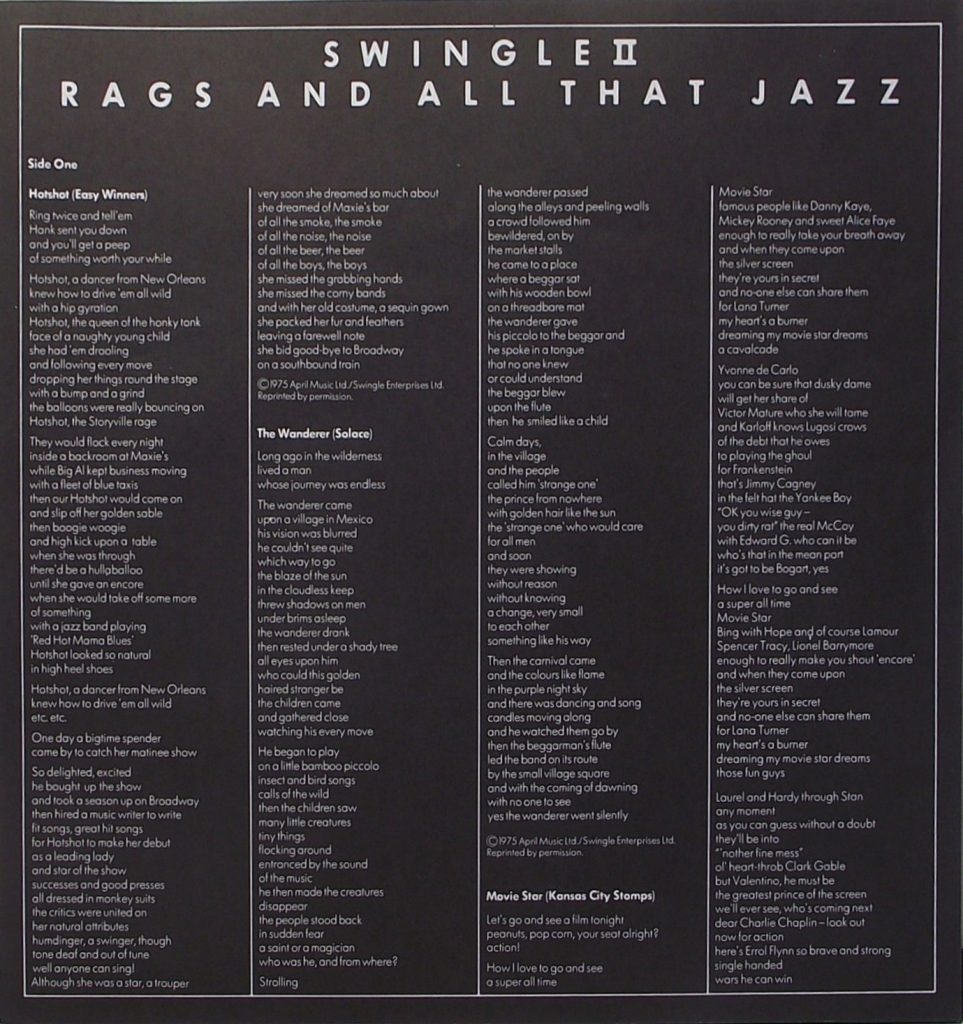 And while I understand the legitimacy of not wanting to be confined in the style that made your success and wanting to explore new musical pathways, I don’t find the Swingles as effective and convincing here as when they vocalise the classical hits. It is not so much a matter of musical genre – although some of the rags of Joplin and the jazz of Jelly Roll Morton do sound excessively simplistic and repetitive to me: they are infused with a kind of contrived joy and a mood that tries hard at being spirited but leaves me cold, and I feel much more genuine joy in Bach. But more fundamentally, there is something of a paradox when the Swingles do what Jon Hendricks (the lyricist from the famous Lambert-Hendricks-Ross trio, see my review of Sing a Song of Basie) more or less invented, or at least brought to a state of perfection: doing jazz vocalese, e.g. putting words on what originated as instrumental music.

Much of that is lost when the instrumental music – the ragtimes of Joplin or the jazz standards of Jelly Roll Morton, Bix Beiderbecke or Fats Waller – are sung with newly-written words. There, as in the pop songs of “Word & Music” (whose originals are all vocal) and the Swingle II’s later albums in the same style from the 1970s, the Swingles sound only like an excellent vocal octet. In some of the songs the vocal virtuosity is awesome (as on the fast-tongued “Grandpa’s Spells” of Jelly Roll Morton). But however excellent, they are here followers rather than path-breakers.

See a live recording of Jelly Roll Morton’s Chicago Breakdown, made in 1978 in Norway, uploaded on You Tube.

For the anecdote, some critics, back in 1976, liked the album: 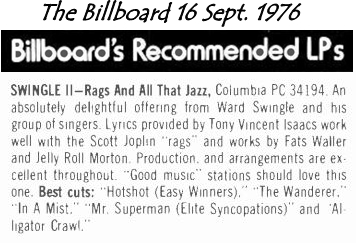 …some didn’t. John S. Wilson, writing in the New York Times of 15 October 1976 (and simultaneously reviewing an Album by four members of the former Paris Swingle singers, Quire):

The lyrics, in general, fight the well-established impressions of the familiar melodies, and the fact that they are delivered in very proper, precise English accents does nothing to alleviate the agony they can cause a listener, while simultaneously diminishing much of the swinging qualities inherent in the material.”

Sony has done a pitiful job at reissuing its Swingle II archive to CD, and the absence of the albums “Madrigals” (see above) and “Baroque” (1976) is particularly lamentable: they would make a perfect match on CD. The good news though is that all the tracks from “Rags and all that Jazz” were reissued in 2009 on “Swing Sing” (see link above), plus the two other Joplin ragtimes from “Words & Music”, also with lyrics by Tony Vincent Isaacs, which is coherent (and seven more tracks from two other albums from those years, see the review for the details). The not so good news is that the CD seems dubbed from the LPs rather than from master tapes: surfaces are very silent but the typical swish of the LP can be heard in the silences around the music. But worse than than is the fact that Sony didn’t even bother to print the lyrics of the songs, impeding much of the enjoyment that could be derived from listening to the vocalese arrangements of Tony Vincent Isaacs. Ultimately, how much you will enjoy that CD will probably depend on how much you enjoy the ragtimes of Joplin, the early jazz of Jelly Roll Morton, Fats Waller and Bix Beiderbecke and the 1970s pop music of Stevie Wonder, Joni Mitchell, Paul Simon, Gallagher & Lyle, and the BeeGees. Many of those hits of one day were forgotten the next day. For Bach, we have eternity.