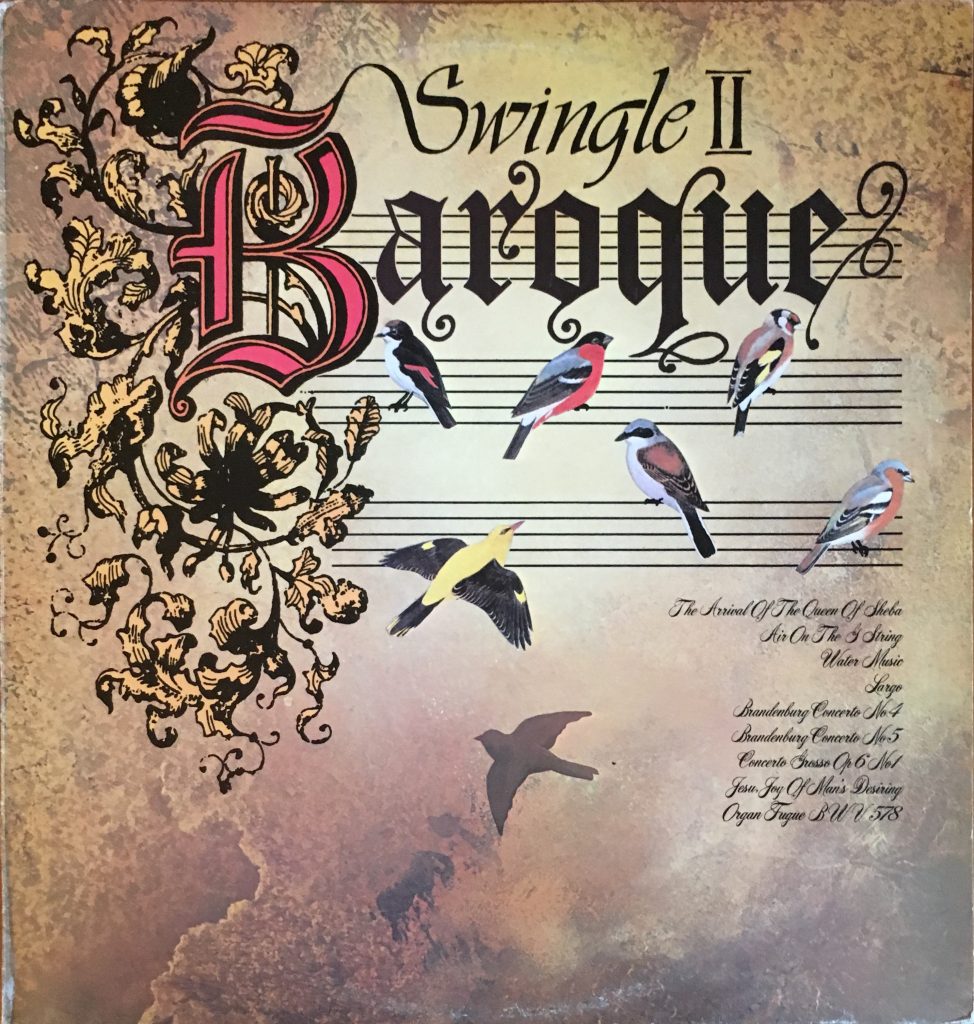 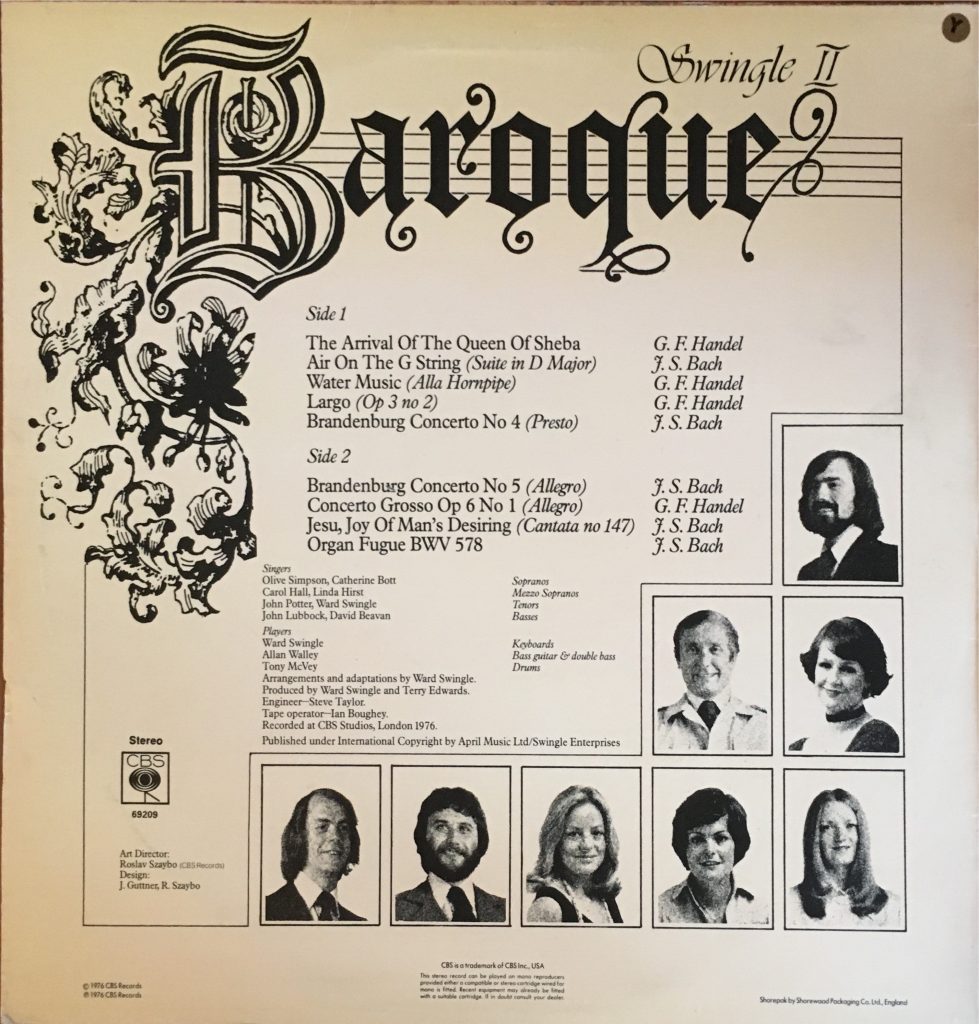 One of the Swingle Singers’ best albums, badly in need of a CD reissue
Originally posted on Amazon.com, 20 October 2012

Sony has done a shamefully pitiful job at reissuing their Swingle Singers’ back catalog on CD, and one of the most lamentable casualties is the 1976 album “Baroque” (not to be confused with the earlier album of the Swingle Singers from 1964, Going Baroque). When the original, Paris-based group founded ten years earlier by Ward Swingle (born in Mobile, Alabama, and the only non-French member) disbanded in 1973 and Swingle moved to London, he reformed a new group with young British singers, now called Swingle II, and they contracted with CBS/Columbia. Seven albums were published between 1974 and 1979 (for the same company they had already made the premiere recording of Luciano Berio’s Sinfonia back in 1968 with the composer conducting the New York Philharmonic, a historically major document [2018 emendation] only recently reissued to CD). These divided between arrangements of Classical music (Madrigals aka Love Songs for Madrigals and Madriguys 1974 and this one) and four albums of arrangements of standards of Jazz, Ragtimes, Broadway, Film music and the abiding or ephemeral pop successes of the day (Words And Music 1974, Rags And All That Jazz 1975, Lovin’ You – Words & Music vol. 2 1976, No Time To Talk 1979), one being an album of pop music compositions specially written for the ensemble (Pieces of Eight 1977). Of these, Sony has reissued only Swing Sing, a compilation from the non-classical albums, gathering the complete contents of “Rags And All That Jazz”, two tracks from “Words and Music”, six from “Lovin’ You” and one from “No Time To Talk”.

But that style isn’t necessarily the most interesting and significant musically of the Swingle Singers. Sorry fans of pop music and ragtimes, but Stevie Wonder’s “You Are The Sunshine of My Life”, Gallagher & Lyle’s “I Wanna Stay With You” and even the ragtimes of Joplin may not entirely offer the same abiding musical rewards as Bach’s Badinerie or Air on the G-String. Also, the changes between the Paris-based Swingles and Swingle II were more sweeping than just one of home base. In 1962 Swingle had invented a unique approach, scatting – or rather, since nothing was improvised, “dee-duming” instrumental music, and so (as I’ve contended in my reviews of the early Swingle Singers albums) returning instrumental music to its very essence: the human voice, elevating to the status of high art what we all do, inadvertently, casually, without thinking about it, while walking the dog, vacuuming, ironing, washing the dishes, showering: humming our favorite tunes.

But the London Swingles not only tackled a new repertoire made mainly of songs rather than instrumental music, they now sung the lyrics. In the case of “Rags And All That Jazz”, they even went a step further and did what the Hendricks-Lambert-Ross trio had brought to a state of perfection in the late 1950s and what Mimi Perrin had frenchified with her Double Six de Paris in the early 1960s (of which Swingle had briefly been a member): they devised new lyrics to emulate the sounds of what was originally purely instrumental (the so-called “vocalese”). Something new was gained of course (their album of late 15th-to-early-17th century Madrigals, with a discreet pop music underpinning, is lovely, see my review), but the Swingles also lost what had made the unique originality of the Paris group.

So “Baroque” is great because it goes back to the basics, reverting to the original dee-duming with discreet jazz accompaniment of drums and double-bass, but now with added keyboards. It is also essential in that it features many one-offs that the Swingle Singers never re-recorded: Handel’s Arrival of the Queen of Sheba (the overture to Act III of the Oratorio “Solomon”), Hornpipe from Water Music, Largo from Concerto Grosso op. 3 no. 2 and Allegro from Concerto Grosso op. 6 no. 1, the presto from Bach’s Brandeburg Concerto No. 4 and Allegro from Brandeburg Concerto No. 5 – running 7:40, the latter is a subsantial addition!

The keyboard is not an acoustic piano but a electric keyboard offering a variety of sounds, glockenspiel or vibraphone in Queen of Sheba, Air On the G String, Jesu Joy Of Man’s Desiring, a mixture of portable organ and horns in Handel’s Hornpipe, a mixture of cello and bassoon in Handel’s Largo, electric organ in Brandeburg 4, and imitating piano only in Brandeburg 5. It is played by Swingle himself (trained as a classical pianist before becoming a singer): and to hear what a virtuoso he is, listen (or rue that you can’t!) to Bach’s Brandeburg 5. In fact, Swingle’s arrangement of the original is perfectly “straight”: except for a cut in the (less virtuosic part of the) final harpsichord cadenza, all the notes of Bach are played, with the two sopranos taking the dialogue of flute and violin, the others singing the inner voices, the double bass usually taking the harpsichord’s left-hand (except in some of the flourishes that run over the two staves) and Swingle the virtuosic right hand (and the drums freely adding their own colors). It is great, one of the Swingle Singers’ most exciting recordings. But no wonder they dropped it from their repertoire: once Swingle gone, who was going to be both a virtuoso singer AND a virtoso pianist?

In fact all the arrangements are very straight, with the keyboard usually taking one or several parts (up to three in solo in Brandeburg 4, the two cellos in Handel’s Largo) and blending with the voices. Soprano I (Olive Simpson I suppose) adds her own lovely embellishments to the upper line of Handel’s Largo.

But even the old standards, Bach’s Air on the G string (from Orchestral Suite No. 3) and Jesu, Joy of Man’s Desiring (the concluding Chorale from Cantata BWV 147), tackled by the Swingle Singers as early as their first album Jazz Sebastian Bach, get new arrrangements: in the Air, a lovely added keyboard counterpoint, vibraphone-like and sounding like an improvisation; the vibraphone-sounding keyboard taking on the part of violins-and-oboe in Jesu. Only the Little Organ Fugue BWV 578, first used by Swingle as the basis of his composition for the film Operazione San Pietro in 1967 (but I’ve exhausted my authorized product links. See ASIN B00006GJKS) and which later became one of the ensemble’s most recorded pieces, sounds very much as it did from 1967 to 1982 (the later arrangement used only vocal percussion).

A great album, one of the Swingle’s best, the only proviso being, as with all the Swingle Singers’ LPs, the frustratingly short TT of 30 minutes. With such good stuff, you want it never to end. Hope the ignorant and tasteless asses from Sony wake up and realize that the fiftieth anniversary of the Swingle Singers’ first album happens next year: that’s the nick of time for reissuing a compilation of Madrigals and Baroque, the 60-minute TT would be just right. HELLO! ANYBODY LISTENING?!