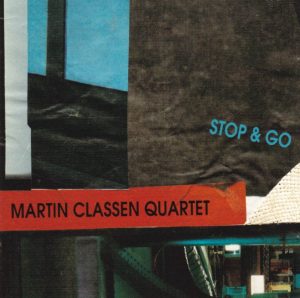 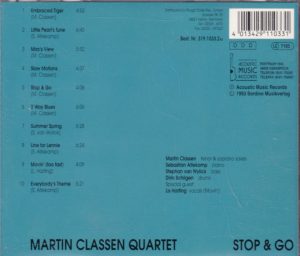 A point of reviewing
3 September 2019

I’ve made a point to review all the CDs that entered my collection, however insignificant – I’m lagging terribly because I buy so much and also have other things to attend to in my life, but I nonetheless hold to the promise as a driving principle. However, it didn’t necessarily apply to jazz records – because I don’t do jazz. But this CD came from a large batch of contemporary music CDs that I bought from a regular e-Bay seller who sells in batches only. So I’ll make it a point to review it, however insignificant it is.

One of the reasons I dont “do” jazz is that I find it usually very formulaic. Hear one, you’ve heard them all (apologies fans of jazz. Spare me your growls, I say that provocatively – to an extent). Granted, this impression is born from a very superficial knowledge of the genre, and I’m sure there is a lot of, or at least some jazz that is very original and strays out of the formulas, but it is a vicious circle: because most jazz I hear sounds to me very formulaic, I have no incentive to listen to more and discover how original jazz can be. I also have enough to fill ten lives with classical music.

So, what did I learn from this CD by the Dutch Martin Classen Quartet (in fact, its leader, saxophonist Martin Classen, is German, see his bio on German Wikipedia) ? That the German & Dutch could play competent, formulaic “club” jazz bordering at times on free, with no particular originality. But we knew that already, it’s not specific to the German or Dutch, jazz, like classical, is, if not a “universal” language, at least one that is common to all so-called “developed” countries, from the US to Japan.

I can’t even sell back this CD, because it already sells for so cheap on Amazon that – if even I found a buyer – I wouldn’t even recoup the cost of shipment. I’ll probably throw the disc away and keep the jewel case. Heck, no, can’t even do that, I see that the central hub’s teeth (the most valuable part of a jewel case) are broken.

And, yes, there’s really a city in Holland called “Monster“.