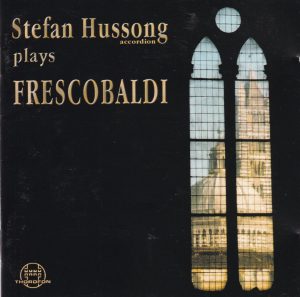 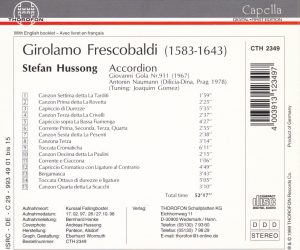 I’m a great fan and a diehard advocate of the concert accordion, both in contemporary music and when it comes to playing 17th and 18th Century keyboard music (Bach and Scarlatti have been the most eagerly visited by accordionists – I wish they did more Haendel, Couperin and Rameau). In contemporary music the instrument’s timbral richness and eeriness has inspired many composers – Gubaidulina and Kagel among the most prominent – to write great compositions. As for keyboard music from the baroque era, the accordion seems to me to an ideal instrument, superior in many respects to the harpsichord and even the piano: it has the sharpness of attack and digital virtuosity of both; but it also has the ability to sustain the sound, like a wind or string instrument, or like the voice, whereas piano and harpsichord, where the vibration starts decaying as soon as it is produced, can only try and simulate a real legato. But the accordion also scores over the organ with its clearer basses (those of organ are often “muddied” and indistinct), making it an instrument ideally suited to polyphony. Finally, I find that the accordion offers a timbral richness that is much superior to the (to my ears) relatively dry and monochromatic harpsichord.

This CD of Frescobaldi played by Stephan Hussong is a good case in point. Although I had heard contemporary compositions for the instrument before, I think it is Hussong and his recording of Bach’s Goldberg Variations that made me an instant believer of the accordion as a substitute for piano or harpsichord in 18th (or, as here, 17th) Century music. As for Frescobaldi, my last (and first) exposure was some 20 years ago, with a harpsichord recital by Robert Woolley on EMI Reflexe that got excellent reviews back then (and was really alone in its field): I found it colorless, very repetitive and boring. Because he was the author of so many Toccatas, Frescobaldi invites the comparison with Bach, but compared to anything written for the keyboard by Bach, he sounded to me primitive (more precisely, like keyboard music in a stage of infancy), rhythmically square, melodically unimaginative and repetitive, to make me wonder why he was considered by so many musicologists (and perhaps musicians) like such an essential composer: was it an harmonic daringness, then, that didn’t really strike my ears? Or just that he planted the keyboard seeds that were developed and brought to fruition a century later by Bach? I returned to it every once in a while, just to check if my appreciation might have evolved. It never did.

But hearing Frescobaldi on the accordion is something else, really. Comparing one of the two compositions shared with the Woolley recital, Canzon Sesta detta La Pesenti (Hussong’s track 7, Wolley’s track 5) is telling. There is a kind of detached and vaguely bored elegance with Wolley’s that seems to point to the gallant French court of King Louis the 15th, and an invigorating earthiness with Hussong. The timbre, the tone color is full and plump rather than vegetarian and emaciated, and with its reminiscences of the hurdy-gurdy or the musette it conveys wonderful whiffs of the village, the folk and the popular. Frescobaldi’s many dance-inspired movements suddenly make sense. It is uplifting.

It’s the instrument, but it’s also the interpreter. For the sake of this review I’ve gone to the invaluable International Music Score Library Project and, yes, all the scores are there (click on the tab “Collections” and look under “Organ and Keyboard Works (Frescobaldi, Girolamo)”). Following with the scores, I now realize that my weariness with Woolley may have had a lot to do not so much with the composer, and maybe not so much with the instrument, as with the interpreter. It is again very telling to compare the other piece shared by both recitals, the Capriccio sopra la Bassa Fiamenga (Hussong’s track 5, Woolley’s track 2): Hussong is simply more dynamic and lively than the stately Wolley. And it is pretty clear elsewhere as well: Wolley is finicky, distorts the rhythms of Frescobaldi more than seems required, roughens the scales, and doesn’t have that unleashed, galloping improvisatory feel so typical of the opening movements of Bach’s Toccatas.

Hussong does, his ornamentation is always tasteful and welcome, and hearing him with the scores under the eyes, yes, I can hear Bach’s huge debt to Frescobaldi. There is nothing rudimentary in Frescobaldi’s four-part writing, it is intimidatingly intricate, and in fact, though a full century away, Bach isn’t very far. It took me Hussong and the rich colors of the accordion to realize it. Now, pianists, would you please invest in Bärenreiter’s complete edition of Frescobaldi’s Keyboard music please? It’s been out for more than fifty years, you know. 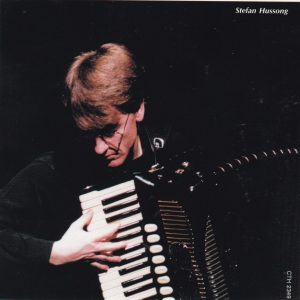 TT 52:17. I wish there had been 20 minutes more, but I am already happy as it is. For those interested in listening to the music with the scores, here is the correspondence:

(And should anybody wonder what and where is that “Kursaal Fallingbostel” where the recordings were made – I did. It is now, since 2002, the city of “Bad Fallingsbostel” in Lower Saxony – no, not because there is somewhere in Germany a “Good Fallingsbostel”, but because of its spa. And – how appropriate that I should repost this 2011 review on March 1, 2022, when Russia is invading Ukraine – Bad Fallingsbostel may soon be back on the map for other reasons than its spa: “Until 2015, there was a British Army base in Bad Fallingbostel, It also hosted Defender 2020 the largest US Army/Nato exercise since the Cold war.”)