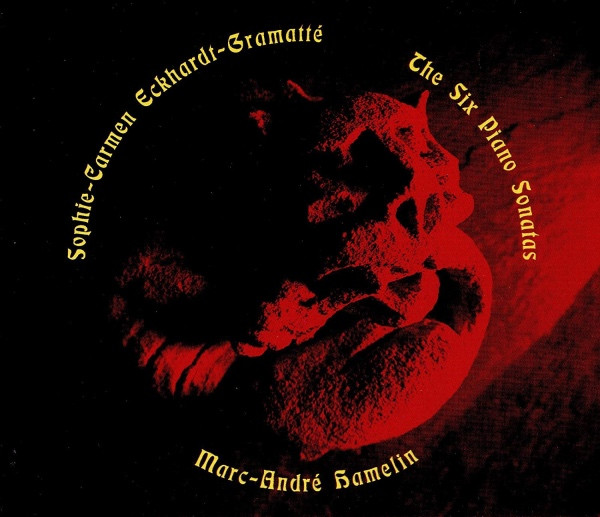 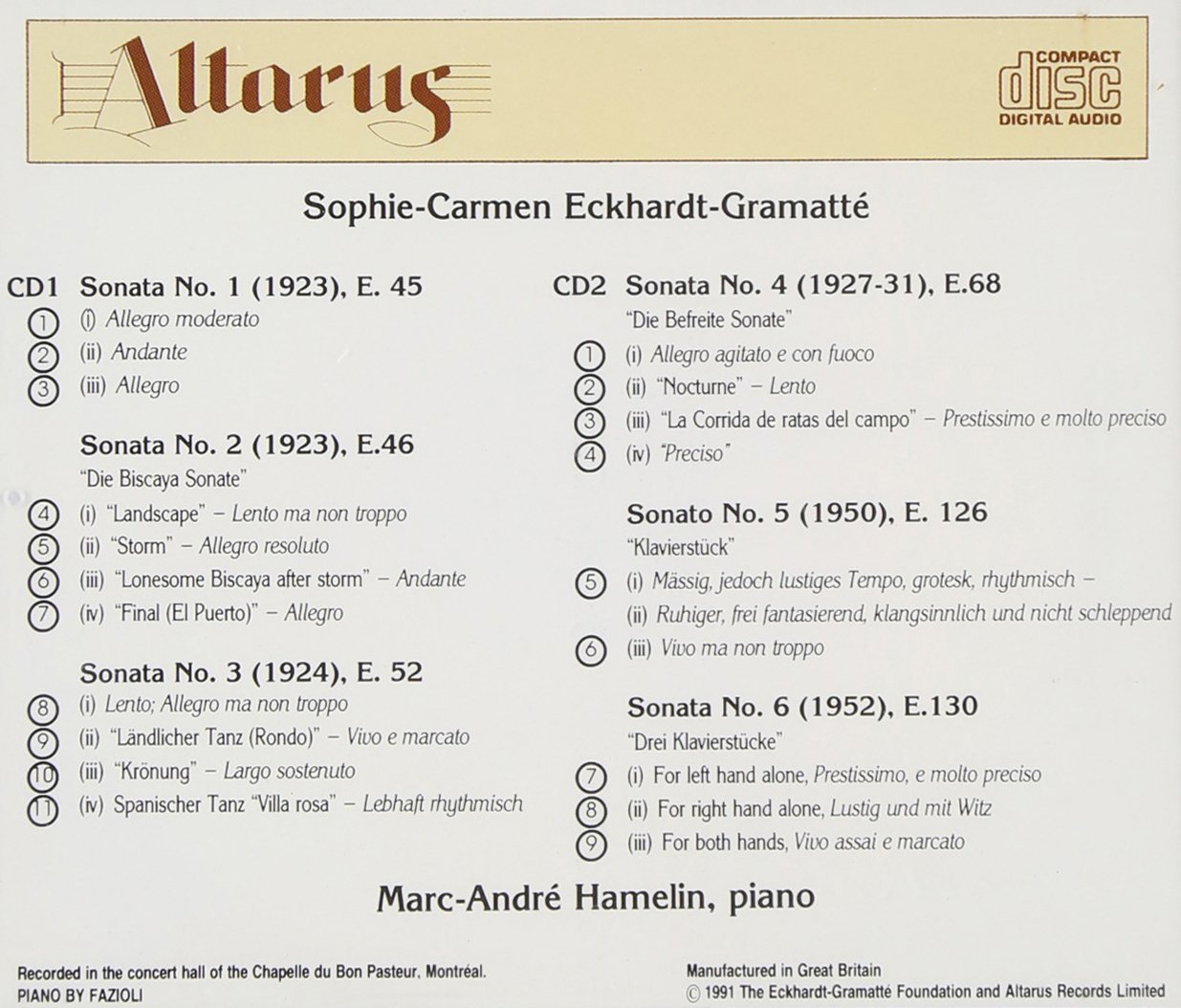 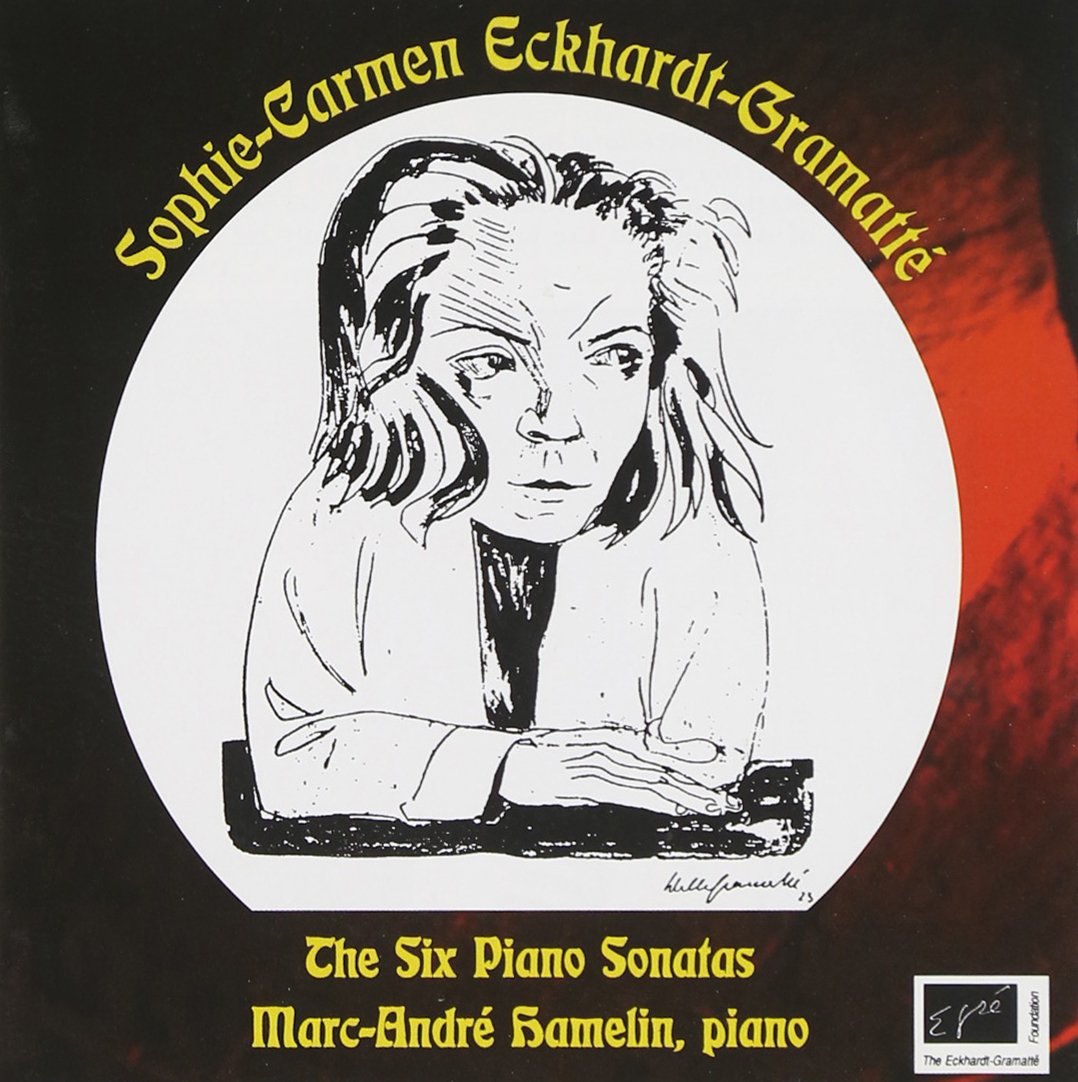 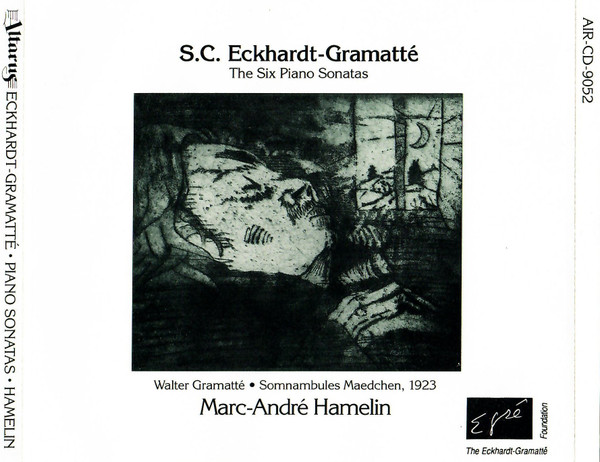 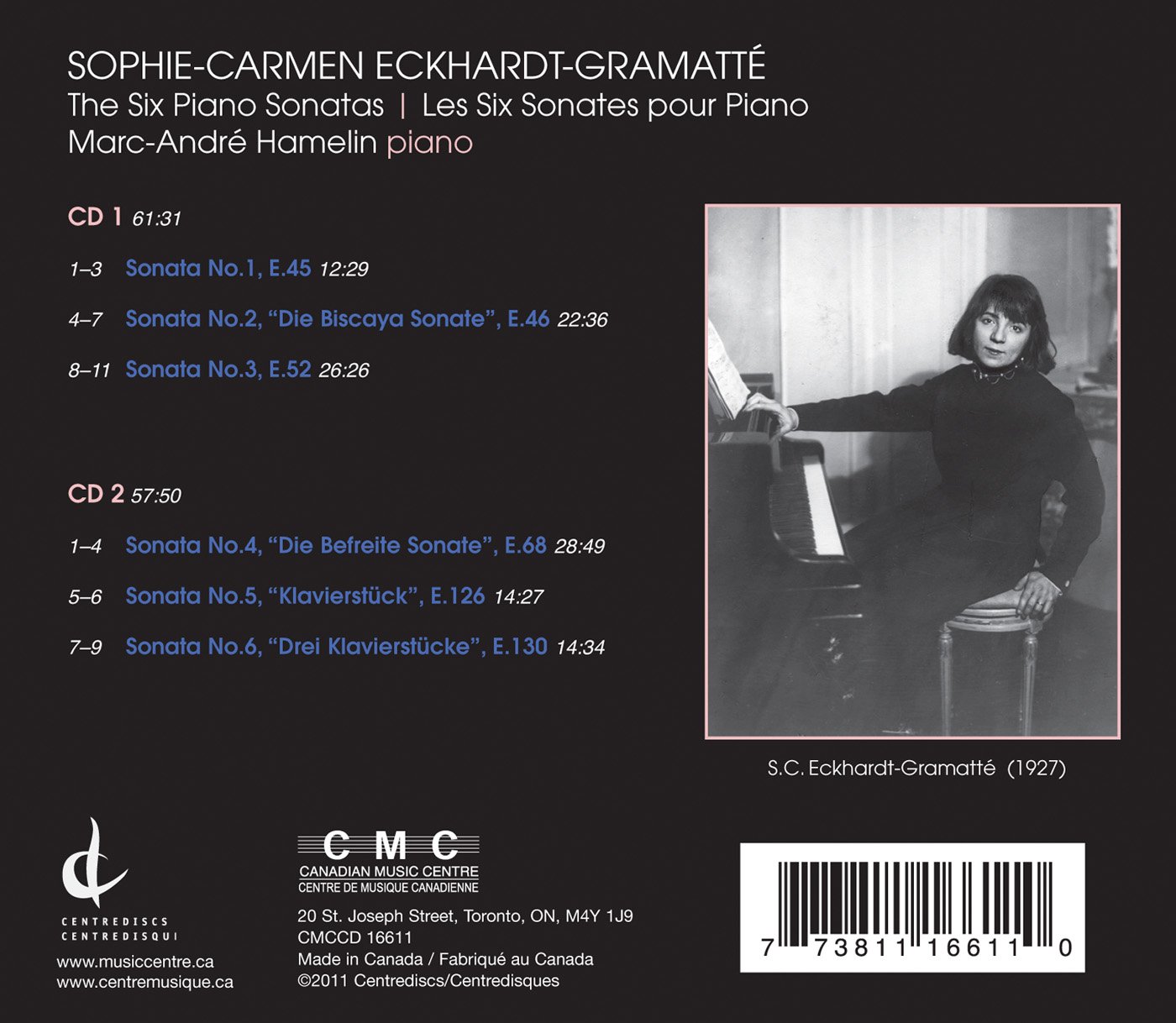 Recorded  in the concert hall of the Chapelle du Bon Pasteur, Montreal, dates not indicated

For the two last Sonatas alone this set is worth the buy
Originally posted on Amazon.com, 27 January 2009

Composer Sophie-Carmen Eckhardt-Gramatté and her six piano Sonatas are a real curio. I bought this set years ago when it was first published by Altarus, in the early 1990s, for the sheer sake of off-the-beaten track rarity, and also because Marc-André Hamelin’s star was starting to shine in the confines of the piano galaxy. This was only his fourth recording I believe, after Bolcom/Wolpe and Ives/Wright both on New World (NW-354-2 Bolcom Twelve New Etudes / Wolpe: Battle Piece, barcode 093228035428, and NW-378-2 Ives: Sonata No.2 “Concord, Mass” / Maurice Wright Sonata, barcode 093228037828), maverick

Kaikhosru Sorabji‘s First Sonata on Altarus AIR-CD-9050 (no barcode, listed under 034066905023, see details on Discogs.com) and a selection of Godowsky‘s Chopin Studies and other compositions on CBC Musica Viva MVCD 1026, barcode 059582005798 (details on Discogs.com). Strangely, the French and German (but not English) bios of Hamelin contained in the liner notes to the Altarus/Eckhard-Gramatté set announce the forthcoming release of Frederic

Back to the composer: Sophie-Carmen was born “de Fridman” in Moscow in 1899, the daughter of a piano teacher and an unknown father (this happened after the marriage with the banker Nicolas de Fridman had broken up). Her childhood was spent on endless travels (England, Paris, Berlin) and only when she married the painter Walter Gramatté in 1920 was she free to give up her burgeoning career as a virtuoso (both of piano and violin, if I understand the somewhat ambiguous notes here) and devote herself to composition. She also changed her name to Sonia Gramatté or Friedman-Gramatté. Husband died in 1929 and in 1934 she married the art critic Ferdinand Eckhardt. They settled in Vienna in 1939 and she took the name Eckhardt-Gramatté. Seems to me as close you can legally get to bigamy. In 1953 they moved to Canada. She died in 1974. The liner notes claim that she was increasingly recognized as a composer – but the recording and liner notes were evidently sponsored by the Eckhardt-Gramatté Foundation so I wouldn’t entirely trust the claim’s candidness, and before this recording was published, I had certainly never heard of her.

The Sonatas are awesome virtuoso displays. The first (1923) starts like a Busoni fantasy after a Bach invention, prelude and fugue. It is boisterous and incredibly virtuosic. The second movement sounds like the kind of Romantic salon music exemplified by Rachmaninoff at his least inspiring, and the finale has the kind of muscular liveliness also associated with Rachmaninoff and late 19th Century virtuoso showpiece salon music. The same early 20th-Century Romantic-virtuosic model of Rachmaninoff-Godowski-Busoni can be heard in the 4th (completed in 1931), but without Rachmaninoff’s unique poetry and taut organization or Busoni’s contrapuntal deliriums. Despite being entitled “Nocturne-Hommage to Chopin”, the 2nd movement of the 4th Sonata doesn’t sound at all like Chopin: too many notes, not enough simplicity. The 3rd movement of the 4th Sonata (“the race of the rats across the field”) is a dazzling etude for left-hand alone. The liner notes aptly stress the Mendelssohn/Weber reminiscences of the finale.

The second (1923) and third (1924) Sonatas veer between the Lisztian model of virtuosity (the 2nd movement, “Storm”, of the Second sounds like a Transcendental Study) and a Spanish atmosphere, either gently evocative or boisterous-virtuosic, reminiscent of Albeniz (although some of the themes of the 3rd are supposedly Russian more than Spanish). It is only after hearing the composition that I read in the liner notes that Gramatté-not-yet-Eckhardt and her then husband spent 2 and ½ years in Spain and that this sojourn left a deep impression on the composer.

If it had been only for these four early Sonatas, I probably wouldn’t have kept this set, despite its rarity value. The pianism is awesome, but the music is derivative and pretty hollow, I find. But then comes the Fifth Sonata. It is separated from the previous one by a gap of twenty years, and a musical galaxy. Not that I want to set forth a theory of the influence of geography on inspiration, but by then Eckhardt-Gramatté had been living in Vienna for 12 years (her move to Canada was two years later) and the Sonata sounds much more Austro-German – of the Schoenberg-Hindemith-Krenek kind, that is. The pianistic virtuosity remains confounding, but the music is bordering on atonal, densely contrapuntal, angular, angry, with some strikingly original gestures, such as the profound, resonant, chiming bass notes that seem to erupt out of nowhere, opening the slow movement (at 3:50 here, as the movement doesn’t get a specific cue) and also returning at the close of the Sonata, or the finale, a series of highly imaginative and unpredictably whimsical or furious variations, including a splendid fugue, very angular and spiky.

The Sixth and not last Sonata (she started but never completed a 7th) is also from 1951 and it is again a pianistic and, even more than the 5th, compositional tour de force, consisting of a dazzling and whimsical, unrelenting toccata-like first movement for left-hand alone, an equally whimsical and mercurial second-movement for the rarely used right-hand alone, and the finale combining both previous movements!

The composer herself recorded her 5th Sonata. It would be interesting to compare that recording to Hamelin’s. Hard to believe that she would have been able to emulate his hair-raising level of virtuosity. Needless to say, Hamelin’s readings seem definitive – and I am not aware that there have been any recordings since, although the two last Sonatas deserve more frequent outings in the concert hall and on records. For these two alone, the set is worth the buy. [addendum 2022] The set was reissued with different covers – in my original review I date the first of the reissues from 2006, but in truth it’s hard to tell, since all come with the same backcover and its 1991 copyright. None (as much as I’ve seen online) seems to be barcoded, but the set is listed on some of your customary commercial websites under barcodes 034066905221 and 076958705229 (which appear to be legitimate barcodes for Altarus). I think Altarus – an interesting label, specialized in the off-the-beaten track piano repertoire, very active in the rediscovery of composer Kaikhosru Sorabji – has folded now: a website can be found, but it seems inactive (and strangely the Eckhardt-Gramatté  isn’t mentioned among their numerical list of publications). The set was reissued in 2011 by Centerdiscs of Canada.