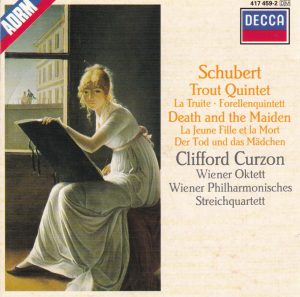 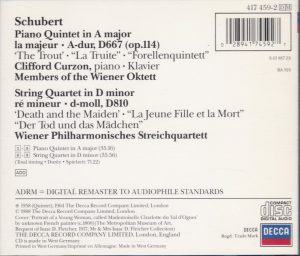 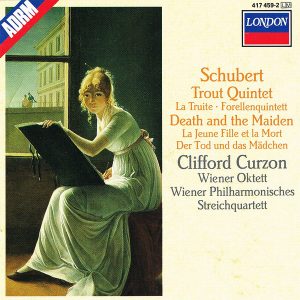 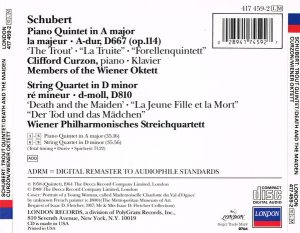 Recorded October 1957  (Quintet), 8-9 April 1963 (Quartet) at the Sofiensaal, Vienna
Note: that dating comes from Philip Stuart’s authoritative discography of the Decca label. The first CD edition indications November 1957 and May 1963 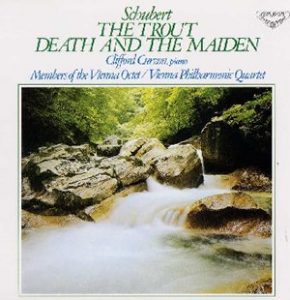 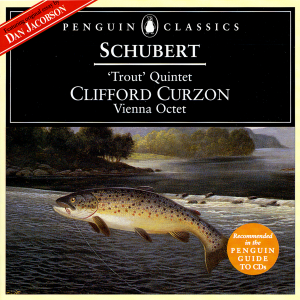 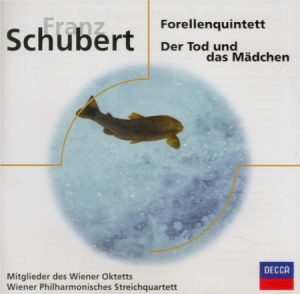 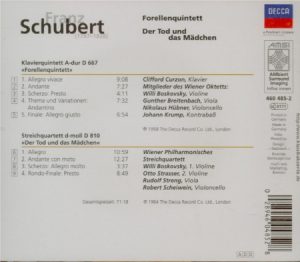 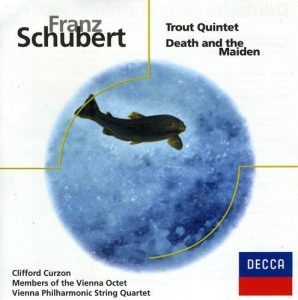 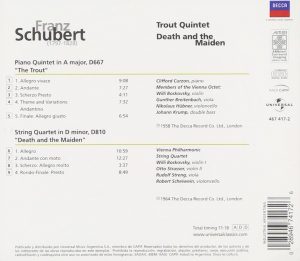 Besides the composer, and the fact that the variation movement in both works derives from a Lied previously written by Schubert, “Die Forelle” and “Der Tod und das Mädchen”, these two recordings share first fiddler Willy Boskovsky, the reputed concertmaster of the Vienna Philharmonic back then, and have enjoyed near-universal critics’ approval ever since they were published – in 1957 for the “Trout” quintet and 1963 for the quartet, then coupled with Schubert’s 10th Quartet, so it was sensible of Decca to put them together – yet allow me to express the dissenting view here.

First, the sound, at least on Decca’s first CD reissue from 1988, doesn’t have much presence, especially when compared to the transfers Boston Skyline did for the Fine Arts quartet in the same coupling, or to the famous Rudolf Serkin and Marlboro’s 1967 recording for Columbia, now Sony.

To be sure, there are great things in the Quintet. The 4th movement – the famous “Trout” variations – is one of them, thanks to the carefree mood and lively tempo adopted at the outset by Curzon and partners, which they sustain until the 5th and “slow” variation (but not in this one), giving a fine sense of coherence to the entire movement. The presto (3rd movement) is fast too and marvellously boisterous, but then the trio section slams the breaks and lapses into campy fussiness. And here lies the rub. In the opening “Allegro vivace”, taken at a nice, lively tempo, Willi Boskovsky displays a slightly wailing violin tone, Nikolaus Hübner’s cello tone is rather dry, and the Wiener players don’t do much of the accents that Schubert has peppered the score with. If I may use this now politically incorrect metaphor, it is a “feminine” reading, as opposed to the more “virile” approach of Serkin or the Fine Arts: not the “boys getting together for a brawl”, but “boys wooing the girl”. The Andante is subdued, again the tone is a rather plaintive, and the Wiener don’t do much of the fp markings that characterize that movement; but there are, I will grant, wonderful pianissimos throughout. The Finale adopts a leisurely, easy-going gait, with none of the exhilarating forward-motion that makes Serkin’s recording irresistible.

In “Death and the Maiden”, the Wiener Philharmonic Quartet’s first movement is metronomic and they are more attuned to the music’s charm (the Maiden?) than to it’s gripping tension (Death?): they (or the recording) simply do not produce much power. The theme with variations doesn’t start well: Boskovsky is so set apart from the others as to sound like a concerto for violin and 3 strings, and the phrasing is earthbound, with none of the otherworldly pianissimos conjured by others – but then the variations unfold with good attention to the details of phrasing and articulation written by Schubert and with a commendable forward motion, very true to the “Andante con moto” marking, to which the Wiener stick to the end, with the third variation (5:50) sounding like the lazy canter of a parading horse: there has been more gripping. Their Scherzo is not particularly brisk (Schubert writes “Allegro molto”) but what weakens it even more is, again, a lack of power, and the trio section, taken at a slower tempo, exudes the usual mawkishness, with no trace of underlying agitation (the same rhythms as in the outer parts of the scherzo pervade this trio): if this Maiden is gripped by Death she sure isn’t aware of it ! The Finale also suffers the same lack of power. In sum, this is a “Maiden’s’ quartet, but I don’t hear much Death.

There are a number of similar couplings in direct competition with this disc, including the Amadeus Quartet’s 1959 (and second) recording of the 14th Quartet paired with their 1975 recording of the “Trout” with Emil Gilels on Deutsche Grammophon, Dame Moura Lympany’s fine recording from 1974 unfortunately coupled with a mediocre reading of the quartet by the Gabrieli Quartet from 1971 on Classics for Pleasure, and a good, traditional interpretation by the Fine Arts Quartet on Boston Skyline from the early 60s (see link above).

For those nonetheless interested, there are too many editions of this very popular recording of the “Trout” for me to track them all. I’ve given above all those I could locate of the same pairing with the 14th String Quartet. There are more with different pairings, for which I won’t provide cover photos, just barcode to make it easy to find them on your customary commercial website (and I’m not trying to be exhaustive):

Other editions of the Trout Quintet. Individual CDs:

Other editions of the string quartet: