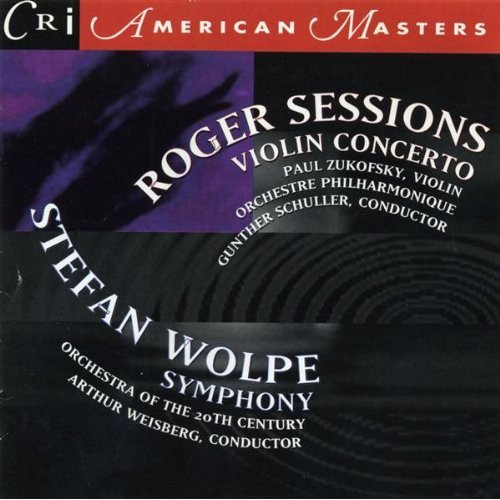 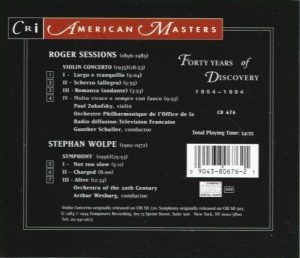 The Sessions Violin Concerto is the masterpiece here – worthy of any of the major Violin Concertos written in the first half of the 20th-Cy
Originally posted on Amazon.com, 19 January 2009

I didn’t expect this: a hauntingly beautiful and original Violin Concerto, arguably one among the great masterpieces written in the genre in the first 50 years of the 20th Century. I’ve reviewed quite a lot of music of Roger Sessions in these past few months, and I noticed that (like all the rest of his output) the Violin Concerto is a seldom recorded piece. Other than this one I am aware of only one other, and more recent, recording,

on Albany TROY938 (2007), bacode 034061093824. And I wasn’t surprised: Sessions is a serious, even stern composer, his orchestral compositions are highly elaborate, but unseductive.

In fact, I wasn’t aware that the Violin Concerto was an early work (1935), way before Sessions’ embrace of Schoenberg’s twelve-tone method, of which (after an intial rejection) he became one of the early and major American proponents (with Wallingford Riegger).

Hearing Sessions Violin Concerto, one understands his later embrace of Schoenberg’s serialism – but, in a way, one also regrets it. His orchestration does without the violins – which means that Sessions eschews any Romantic tradition and feeling. Winds and brass dominate. The atmosphere is sparser, and it is rather Stravinsky that the orchestration brings to mind. Intimations of Schoenberg can be heard in some of the square rhythms of the first movement, in the melodic lines verging on atonalism, and generally in the elaborate counterpoint.

But the surprise for me is that the Concerto is also beautifully, even painfully lyrical, in a way that would almost evoke Barber’s Violin Concerto (although Sessions’ melodic contours are much less evidently tonal, and his orchestral counterpoint much more elaborate and eventful). The Concerto follows the traditional architecture (the first movement is “Largo e tranquillo”, then comes a scherzo (allegro), Romanza (andante) and Finale (Molto vivace e sempre con fuoco). In the fast movements some orchestral or soloistic gestures may vaguely remind of Bartok’s Violin Concerto (but Bartok’s was written 4 years later) or, in some of the perky woodwind commentaries, Stravinsky’s, but only very vaguely.

Now remember: 1935. I don’t know who composed like that back then. 1935 is when Prokofiev composed his Second. Stravinsky’s was from 1931, Berg’s was 1937 and Bartok’s the same year as Barber’s: 1939. Schoenberg’s was completed in 1936, but Sessions is much more lyrical (and tonal). His Violin Concerto is entirely original, and worthy of all these others.

So why did Sessions move away from such an outpouring lyricism? Maybe he felt he had said all there was to be said in that vein. He didn’t milk it.

Too bad for us.

The booklet does not give the date of recording, only mentioning that the soloist, Paul Zukofsky, was 24 when he made it, which computes to 1967. The sonics are excellent, with spacious stereo. Zukofsky’s tone remains unfailingly beautiful and the French radio orchestra seems on top of the music. The liner notes for Sessions, by a Ruth Dreier, presumably reproduced from the original LP, are useless. They consist of a literary comparison between Sessions and… Walt Whitman. Why Whitman? No link whatsoever. The only purpose of the comparison seems to contrast the prolixity of Whitman and the scarcity of Sessions’ inspiration. The only words we get on the Concerto are that “one’s breath is taken away by the sheer audacity of a youthful composer coupling joyously, openly and accessibly with his muse”. Yeech! Apparently nobody proofread the liner notes, either. The last line of each column is repeated at the top of the next one – gives you the feeling that your mind is stuttering. In the notes for Wolpe you also read the wonderfully nonsensical sentence: “according the Wolpe’s program not the third movement is an exuberant, joyful, athletic piece”. On the back cover conductor Arthur Weisberg becomes Arthur Wesburg. CRI calls the French orchestra in Sessions “Orchestre Philharmonique”, but the

original LP, CRI SD 220 or CRI 220 USD (both forms are documented on Discogs.com, here and here), made it explicit that it was “Orchestre Philharmonique de l’Office de la Radiodiffusion Télévision Française” – best known in France by people of my generation as “ORTF”, if you need to save space.

Once again the music of Stefan Wolpe strikes me as providing a perfect caricature of “contemporary music”, e.g. post-Webern 12-tone music, as it could be sneered upon in the 1950s to 1980s. Of his String Quartet I wrote that it sounded like “furious Webern” (see my review of CRI CD 587), and the same is true with the Symphony. It was composed in 1955 but premiered only 10 years later. It is packed with orchestral events, but it all sounds pretty arbitrary. Also, although the symphony is formally divided in three mouvements, you do not get the sense that anything changes from movement to movement: it could be one continuous, furious movement. Reading the liner notes after hearing the music is likely to make you laugh: they contend, for instance, that “the first movement is an essay in intimate lyricism”. Boy, is that wilful deception! It is an essay in furious Webern.

What is it that makes Schoenberg’s and Sessions’ orchestral works so much more interesting and engaging than Wolpe’s, although they broadly follow the same principles of composition? I would tentatively say that there is, with them, a genuinely lyrical sense of melody. Their lyricism and melodies may be atonal, stern, elaborately counterpointed by other stern melodies (and that too makes their compositions highly engaging), you still get that sense of direction. With Wolpe you certainly have a wealth, even a surfeit of furious orchestral events, but they sound like an arbitrary colletion of noises. It doesn’t even have the evocative power of the composers of the 1960s avant-garde (Penderecki, Xenakis and many others) who, after Varèse, invented novel playing techniques and made noise into music, using the orchestra for color rather than melody. With Wolpe the instruments are used quite traditionally, even if it is at times in uncomfortable registers (for the player and listener). So you don’t even get the impression of sonic discovery of great dramatic impact that you get with the “noises” of that avant-garde generation of the sixties.

This is the recording of a live performance given in New York on September 1, 1975. The recording sounds like it was made on amateur equipment, the sonics sound mono, lacking bloom and depth, and come with a permanent static.

On the original LP, CRI SD 503, Wolpe’s Symphony was paired with Schoenberg’s Erwartung, sung by Susan Davenny Wyner (link to Discogs.com). I regret the loss to oblivion of the pairing.

My recommendation is for Sessions.