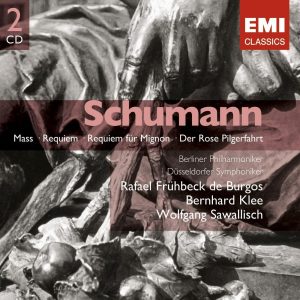 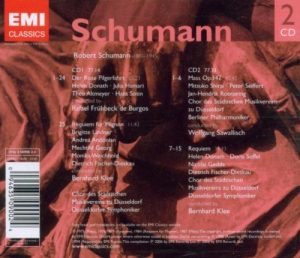 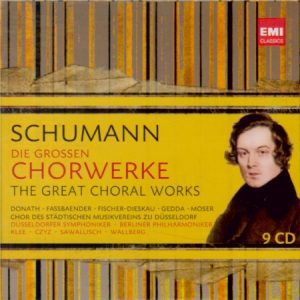 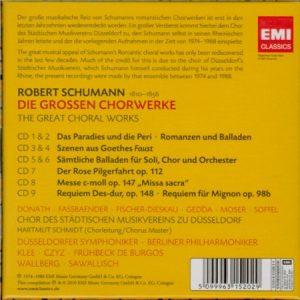 Recorded 8-13 September 1974 at the Rheinhalle, Düsseldorf

A wed wose, how womantic: much Eusebius, little Florestan
27 November 2017

It takes more than casual hearing to suck out all the beauties of Schumann’s Der Rose Pilgerfahrt (The Pilgrimage of the Rose).

Those old enough to remember Blazing Saddles will get the pun of my review’s title, sorry about it, I couldn’t resist, but it isn’t totally gratuitous either. The cantata, written at the end of Schumann’s life, during his ultimately unhappy stint in Düsseldorf and when the first signs of his mental illness were taking their toll, is described by the composer as a “fairy-tale” (Märchen) and, with its rounds of elves, there are some similarities with Mendelssohn’s Midsummer Night’s Dream. The poem was submitted by a poet of only local fame, Moritz Horn, but its romantic and sentimental imagery flared up Schumann’s imagination. It is the story of the Rose – perhaps the daughter of the Queen of the Elves, or perhaps just a rose – who requests to live the bliss and pangs of human love. Wish granted by mom, but with the condition that, as a rose, she will in the end falter and die. Which she happily does after giving birth to her child after wedding the forester’s son.

The music is very lyrical. Wagner comes to mind at times, but it’s the lighter Wagner of the chorus of spinnstresses in Fliegende Holländer or the Rheinmaidens in Rheingold. The rounds of the elves (track 3, track 10) are straight out of Mendelssohn. There is moving pathos also in the funeral procession (track 8) and Rose’s prayer (track 10). But, despite the few scherzando moments (among which the dances of the elves and the chorus of foresters track 15 are the most notable), there is hardly any dramatic contrast, much Eusebius and little Florestan.

I also find the orchestration fairly bland, much reliant on strings and with little contrasts of color from woodwinds and brass, and the melodic invention, while illuminated by the vocal beauty of the stellar cast of this recording, isn’t absolutely top-drawer Schumann, without any tunes that really catch one’s attention and stick in one’s mind. It is a composition that one would more easily associate with one of the second-rate composers of Schumann’s circle rather than with Schumann himself, as many of his compositions from his Düsseldorf and post-Düsseldorf years. One dreams of what Berlioz might have done with the same material (other than setting it in Hungary, that is).

EMI’s version, recorded in 1974, would seem insurpassable: as mentioned, the vocal cast is absolutely stellar, and the Düsseldorf choir – the distant heir of those who created the Cantata (the liner notes mention that Schumann’s manuscript was purchased by the Musikverein in 1974) –acquits itself more than well; in some numbers, the full women’s chorus sings what the score allocates to solo voices from the choir, as in the opening movement at 1:41 when alto enters, or track 20, and I have no issue with it, since in those moments the voices aren’t those of individualized characters. But I wonder if part of the problem I feel with the music’s lack of contrast doesn’t derive at times from Rafaël Frühbeck de Burgos’ conducting, and particularly his choice of tempi, not always animated enough. Looking at the score (it is available, in its first edition from 1852, on the International Music Scores Library Project – link will open a new tab to .pdf document- and gratitude again to those who scanned and uploaded it), the character indication of the opening movement is “in joyous tone”, but there Frühbeck, although he is only slightly, but not dramatically, slower than the score’s metronome, sounds more relaxed and pastoral than truly joyous. When come the Rounds of the Elves (tracks 3 & 4, very Mendelssohnian), although again Frühbeck is close enough to the score’s quarter note = 72, his elves sound rather heavy-footed – “wir tanzen”, they sing, but it isn’t a very excited dance.

I’m not going to comment on each bit of the score, and the problem isn’t across the board. Still, I am left wondering if more animation sometimes might have lent more character – and I recognize that this may be a problem of Schumann’s metronome indications as much as of Frühbeck de Burgos’ rendition of them. Also, the relative blandness of the orchestration may be in part to blame. The excellent and informative liner notes mention that Schumann first conceived and wrote the cantata not at all as an orchestral cantata, but as one with piano accompaniment, and was very happy with that version: “I actually composed the piece originally with only pianoforte accompaniment, which, because of the delicate material, seemed to me completely sufficient, and still does. But now I have been approached by friends and acquaintantces to orchestrate the whole piece. It will make the work thus accessible to larger ensembles.” The notes also quote another letter from Schumann, who apparently hated having to return to his work and orchestrate it, “for once a thing is finished, it is no longer of interest to me, is a closed chapter whith which I do not want to have anything further to do”. Maybe my feeling of an orchestration that is not very interesting derives from that. Unlike, say, Mahler’s Das Lied von der Erde, conceived for orchestra and where playing the piano reduction is, in effect, a bastardization of what the composer conceived, in the case of Schumann it is probably more “authentic”, closer to his true intentions, to play the piano version.

And indeed, turning to recordings with piano accompaniment, as the one published by ebs in 1992 with pianist Roberto Szidon and a Stuttgart Choir under Rupert Huber which claimed being a premiere, the piano, together with a more chamber-sized choir, lends the music sharper edges and more transparency in the more scherzando moments. In comparison, for example, Frühbeck’s two penultimate choruses (tracks 21 and 22) sound way too grandiose and thick for the music, likening it to grand opera or the Finale of Beethoven’s 9th rather than to the wedding and drinking songs they are supposed to depict. On the other hand, I find moments like the funeral procession or Rose’s prayer more effective in the orchestral version.

Set in two parts, the Cantata is mostly continuous, but has 24 numbers, and the CD’s cueing is fine. But a big drawback for audiences not familiar with German is that the booklet provdes no translation – but in the age of the Internet, there is no such problem that isn’t offered a… translation. TT 65 minutes, it looks like Schumann had the CD in mind when he composed his cantata.