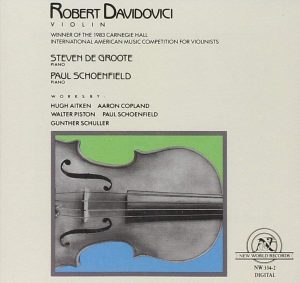 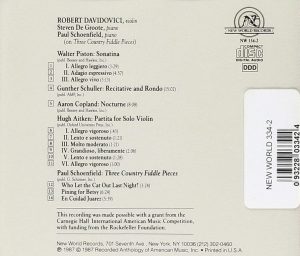 The recording was made in December 1986 and was Robert Davidovici’s debut recording, as part of the prize for winning the the 1983 Carnegie Hall International American Music Competition. Co-winner that year was French violinist Maryvonne Le Dizès-Richard, who as a result recorded “Hidden Sparks”, New World Records 80333-2 (1986/1997), barcode 093228033325 (with works of Elliott Carter, Tod Machover, Ralph Shapey and John Melby), and went on to become solo violin of Boulez’ Ensemble Intercontemporain.

Davidovici is a Romanian violinist and a student of Ivan Galamian at Juilliard. After his prize he served for years as concertmaster of various orchestras, including the Vancouver Symphony, the Osaka Philharmonic, the Residentie Orchestra of The Hague, the Cincinnati Symphony and held a number of teaching positions in American universities.

There’s no major masterpiece in the five works selected, although they make for an appealing program of discoveries. They go from easy-listening and entertaining – Copland’s early and surprisingly impressionistic and Ravelian Nocturne from 1926, written for his teacher Nadia Boulanger (intense, lyrical and poetic – Enescu also comes to mind), Piston’s mixture of neo-classicism and syncopated Coplandesque Americana in the 1945 Sonatina – to tensely modern and sometimes dry: Gunther Schuller’s Recitative and Rondo (1954, sounding very much like an offshoot from Schoenberg’s Fantasy) and Hugh Aitken’s Partita for solo violin (1968, sounding like an offshoot from Bartok’s Solo Violin Sonata).

My favorite is Paul Schoenfield’s Three Country Fiddle Pieces, the first a demented Hoedown traversed by whiffs of Blues, the second sounding like a modernized reminiscence of Ravel’s Blues in his Violin & Piano Sonata skidding into berserk Enescu, and the third, motoric and pounding, a wild mixture of Jazz, Ives, Bartok’s Violin-Piano Sonatas and Enescu again.

Even in the thorniest moments Davidovici plays with faultless tone and pitch-precision (which makes his Piston Sonatina preferable to the more rough-sounding Paul Zukovsky on CP2 114, “Music for a 20th Century Violinist”, barcode 0096661011424, with works of Ralph Shapey, Wallingford Riegger, George Crumb, Harvey Sollberger, Arthur Berger).