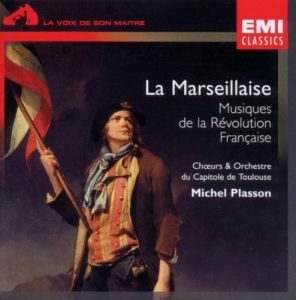 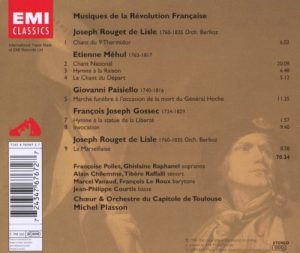 This is one among the surprisingly few records that cropped up in preparation of the celebrations of the bicentennial of the French Revolution, in 1988/89, and it remains the best of those I’ve heard. Plasson’s main liability is that he doesn’t use anything even remotely close to “authentic” or “period” versions, and his Marseillaise is a good case in point. The most “authentic” orchestral Marseillaise would be Gossec’s orchestration, made in October 1792 (Rouget’s song was hardly six months old then, and it was so immediately successful that it spread throughout France like enflamed gunpowder) for his Lyric scene “Offrande à la liberté”, played at the Paris Opera (it still was in 1799). But inexplicably, I am aware of no recording whatsoever of that version, and not even of an edition, modern or ancient [Addendum September 2017: Finally one was published in 2016 by Centre de Musique Baroque de Versailles]. Gossec’s 1792 orchestration would surprise many listeners, as it was written for the full forces of the Paris Opera orchestra, including strings. A year later Gossec also produced an “outdoors” and ceremonial orchestration for Wind Band, and yet another Gossec orchestration for Wind Band was printed in 1798. The issue of Gossec’s orchestrations of The Marseillaise is not simple, see my extensive review of Erato’s “19 Grands Hymnes révolutionnaires” for the full details.

Another possibility is the one adopted by Jean-Claude Malgoire on his recording for French CBS, CDCBS 45607 (1989), “Chantons la révolution”, in which he uses an uncredited orchestration apparently made for the recording, but based on the original Rouget song, as it was first printed in Strasburg by the publisher Dannbach under the title “War Song for the Army of the Rhine”, shortly after its composition at the end of April 1792; it differs from the version known today by some subtle but striking melodic differences, and by the inclusion of a curiously operatic orchestral ritornello linking the refrain to the next verse. [Addendum 2017] John Wallace also offered a very convincing modern re-orchestration “in the style of” on Nimbus NI 5175 (1989), barcodes 083603517526 or 0710357517525 (a disc whose main course is Berlioz’ Symphonie funèbre et triomphale), but this one based on the piano reduction of the 1798 version.

Instead, Plasson uses Berlioz’ orchestration (and he does too in Rouget de Lisle’s Chant du Neuf Thermidor, track 1), and while there may be a strong legitimacy for doing so, it dates from 1830, loses the 1789 period flavor (that can still be heard in Berlioz’ Symphonie funèbre et triomphale) and makes the Marseillaise sound like… music of Berlioz, so really it might have better been reserved for the bicentennial of the 1830 revolution, which will happen in less than 20 years now.

So Plasson is disappointing for not playing the pieces in their original orchestrations (or good imitations), but in later transcriptions for symphony orchestra, with much more predominant strings. In Paisiello’s “Funeral March on the Occasion of the Death of General Hoche” (track 5), he plays in fact the same arrangement by an Alexandre Cellier that George Tzipine recorded in 1954, in an era much less interested in “period authenticity” than ours (a recording reissued on another one of those bicentennial discs, on EMI Studio CDM 7 69830 2 (1988), “De La Révolution à L’Empire”). Frustratingly we are not told whose orchestration of Méhul’s “Le Chant du Départ” is played (track 4), one for full romantic symphony orchestra; it would be nice to think that it was also Berlioz’, as the composer mentioned in a correspondance of March 6, 1848 that he was preparing an arrangement for the English publisher Beale, but apparently nothing came out of it and Bärenreiter’s complete new edition of Berlioz’ works doesn’t include anything like it.

On the other hand, one point on which Plasson scores is that, other than his later and “inauthentic” orchestrations, he does play the pieces as written. Méhul’s Chant du Départ is a good case in point. The famous song (it was called “the other Marseillaise” and nearly made it as the choice for the national Anthem) has 7 stanzas, followed each time by refrain sung by chorus, and each stanza is attributed to a different character and voice (and who the chorus is supposed to depict also changes, so the size and section of chorus should  change accordingly): “A Representative of the people” (and chorus of warriors), a mother (chorus of mothers), two old people (chorus of old people), a child (by now I assume you got the principle), a wife, a young maiden, three warriors (followed by final and complete chorus). For all his period instruments and instrumentation, Malgloire has it sung only by bass Ruggiero Raimondi with chorus, and consequently cuts the three “feminine” stanzas (and Raimondi impersonating “the child” is not entirely convincing, either…). It homogenezises it all and, given the repetitiveness of a basic material that was meant to be very unsophisticated in the first place, it makes it much more boring than Plasson’s complete stanzas. The alternative version by Claude Pichaureau and the Wind Band of the Paris Police on Erato’s “Les Grands Hymnes Revolutionnaires” simply shares four stanzas (three are cut) between a tenor (the same Tibère Raffalli who sings with Plasson, but on Erato spelled with a single L) and a mezzo (much too matronly to convincingly depict a child), and makes no effort to characterize the refrains, giving them each time to the mixed chorus. Plasson’s attribution of each stanza to its character is laudable then (and the child soloist and children chorus are felicitous) although, inexplicably, he cuts the two stanzas of the elderly men and the wives. Add also that Plasson’s forces sing it with much more enthusiasm than its two counterparts – and his soloists with much better articulation than Raimondi. The same comments can be made of the Marseillaise: Plasson plays the 7 stanzas (the seventh, known as the children’s stanza, which has become part of the canon, was not originally from Rouget de Lisle; it was added in October 1792, to great success), Raimondi and Malgoire played only 4, and Pichaureau only 3, shared between the tenor and the mezzo. Again Plasson’s conducting is much more enthusiastic than Malgoire’s and Pichaureau’s, and his quartet of French singers (and boy soprano in the seventh stanza) provide for much more diversity and again have a much better articulation than Raimondi.

Other than these, Plasson’s recital is highly valuable for offering little-known songs, hymns and occasional pieces from the Revolutionary era, by Méhul, Gossec and Paisiello. Granted, in most cases, they are more a document of the times than valuable pieces of music. But Méhul’s Chant National (track 2) is not only an extended cantata (20 minutes) involving large forces, with a few striking moments alternating with more frequent bombastic ones, it is also an experiment in spatialization, with two large orchestras and their accompanying chorus and soloists placed at two opposed sides of the venue (originally the vast Eglise des Invalides in Paris), and a small orchestra of harps, horn and women’s chorus placed above to depict the call of the celestial voices – unfortunately, that spatialization can’t be heard in its full impact on this stereo recording. There is a nice horn solo at the beginning of Gossec’s Invocation (track 7). But the one musically striking and effective composition is Paisiello’s Funeral March – the piece in fact that drew Bonaparte’s attention on him in 1797, following which he became, five years later, the Empire’s official composer. Comparing Plasson’s to Tzipine’s 1954 recording, both are excellent, with high drama, but Plasson has, evidently, much more sonic impact. Among the singers of the vocal pieces, the voice of tenor Tibère Raffalli, with its nasal timbre, is more valiant than well-honed – but, in the context of what is sung, this is perfectly appropriate: too much operatic elegance would have been out-of-place. The two baritones and bass, and soprano Françoise Pollet in The Marseillaise, are perfect. TT 70 minutes, informative liner notes (but they present the compositions in chronological order rather than in the disc’s order and don’t mention track number, making the reference to the various tracks a little more tedious than it might have been – no big deal). Despite the use of “inauthentic” orchestrations, this remains the most satisfactory among the similar CDs celebrating the songs and music of the revolutionary era.