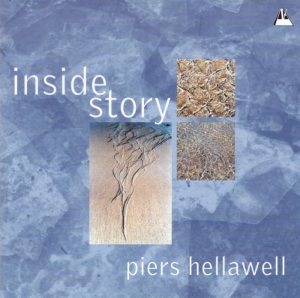 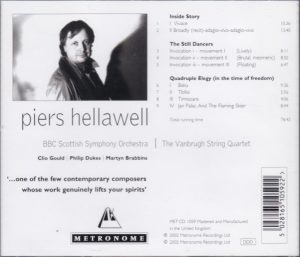 As I recounted in my blogpost of 29 March 2018, Piers Hellawell was a chance encounter, through an eBay seller who offered much for cheap, and that’s always when you can afford to take chances. In fact, ultimately, that’s a bid I lost – I aimed for too cheap – but, not knowing who Hellawell was or what his music sounded like, I listened to the 30″ excerpts on Amazon and found them attractive and intriguing enough to order this and another CD of his music. Awaiting its arrival, I listened to a number of his works as available on YouTube (see my blogpost), and even dipped in the ongoing controversy about “Music as research” that simmers in British academic circles, and in which Hellawell has contributed (see second blogpost of 29 March 2018).

This monographic CD (two concertos, a string quartet, all dating from the last decade of the last millenium) is a great introduction to the composer and his music. The music of Hellawell is much of what I wish for when I listen to contemporary music: its language is advanced and demanding enough – no neo-romantic, clowingly sentimental film-music like gestures here, a genre in which many prominent composers seem to revel these days – but not intractably “avant-garde” either (vade retro, Ferneyhough and Wuorinen!); busy orchestrally, very colorful and atmospheric, loud at times and dramatic, dynamic and propulsive in the outer movements in a manner – oh very vaguely – reminiscent of Walton’s First Symphony. But also extremely lyrical – again, not the sentimental and mawkish lyricism of the reactionary neo-romantics, not a lyricism that whines, a passionate lyricism that scorches – and it’s no coincidence that two of the works featured here are a double concerto for violin and viola (Inside Story) and a violin concerto (Quadruple Elegy): they are magnificent additions to the genre. For the lyricism, Britten may come – oh so vaguely – to mind, but also (especially in Quadruple Elegy), other contemporary composers who develop a very personal language from the influence of World Music, like Terry Riley or Kevin Volans – and I’m thinking more specifically of their respective string quartets. Hellawell’s own string quartet, The Still Dancers, certainly evokes that style and atmosphere, in its block-like construction made of the succession of short sections, its dance-like dynamism and jagged rhythms and its beautiful and eerie sonic invention, although it is nowhere said that  world-music was an actual influence on Hellawell. The “Dancers” referred to in the title or not “human dancers” but “natural phenomena, features created by some moving force but subsequently frozen in shape“.

Hellawell may use some “advanced” performance techniques and modes of sound production – the string quartet begins with what sounds like the wooden part of the bows softly but frenetically struck against the strings (Ligeti’s 100 Metronomes comes to mind), but the video of another live performance on YouTube (the American premiere by the Friction Quartet) shows that the players are in fact using (apparently) pencils, or chopsticks. You can see there other such techniques – the most striking comes at 17:37, which I checked while listening to the CD to know where the performers got their gamelan chimes from at the beginning of the third movement (CD track 5). You’d think you were hearing a piece by John Cage… Well… no gamelans. Even after watching I wasn’t sure how they do it. Jump to 18:48 in the video and you’ll get it. So Cage invented the prepared piano, and Hellawell the prepared string quartet… But other than those few moments, there’s nothing that strikes me as truly “ground-breaking” in Hellawell’s music, but he seems to me to offer a superb synthesis of “the old and the new”.

Hellawell is such an “under-recognzied” composer that he doesn’t even get an entry on Wikipedia, and I can find nowhere, not online (always the same bio that shows up), not on his own website, and not in the CD’s liner notes, where the man was born (the only element of personal biography that I could find is that he was born in 1956) and if that makes him English, Welsh, Scottish or Irish. He’s a professor of Composition at the Queen’s University of Belfast since 1981, but that doesn’t necessarily make him Irish. An article in a 2012 issue of The Journal of Music, available online, did call him an “Irish composer”, but in a private correspondence, the composer indicated that he was British, and that he considers Scotland to be his home.