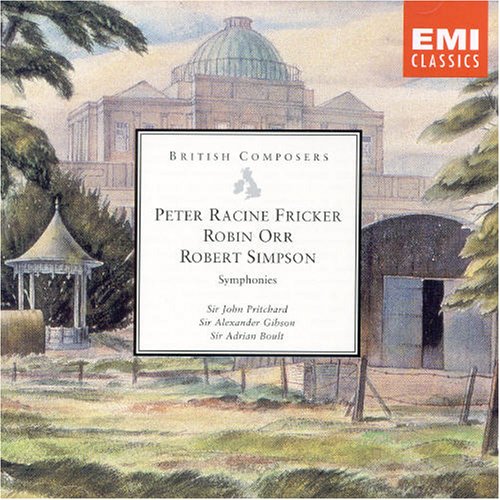 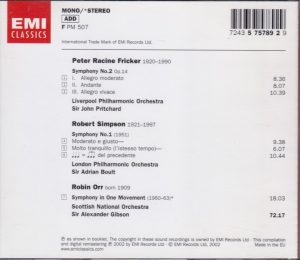 EMI’s “British composers” collection is a fine series. His Master’s Voice, EMI’s forebear, is a UK-originated and based company, and they have a huge catalog of the familiar and unfamiliar British repertoire, performed by the greatest British performers and ensembles. Not only has EMI brought back under the “British composers” banner many recordings of major or minor 19th and 20th Century British composers (including stacks of Elgar, Vaughan Williams and Britten and more than a handful of Walton) previously issued or reissued on CD on their “mainstream” collections in the first decade of the CD era (including the mid-price “Studio”), but they have also reissued for the first time on CD some recordings that I wasn’t even aware had existed on LP, and at any rate were long out of print when I started collecting, in the finishing years of the LP era, and sometimes by composers that I also wasn’t aware of. The present CD is another good case in point.

I’ll quote the liner notes’ first paragraph, which I find entirely accurate: “The composers featured on this record came to maturity after World War II, at the time when British music was turning away from the opulent and folk-derived traditions associated respectively with Elgar and Vaughan Williams. Fricker, Simpson and Orr responded to a broad range of Continental influences, some of which had to be discovered anew after the cultural rift caused by the war. But in their different ways they also sought to reinvigorate fundamental traditions of musical architecture with a contemporary sensibility. The three symphonies here are impressive and distinctive contributions to the genre.”

I knew the name of Peter Racine Fricker (1920-1990) but had never heard anything significant, and Robin Orr is a first encounter. It is forgotten what an important composer Fricker was in the UK’s post war music world in the 1950s, after the premiere of his Koussevitsky prize-winning first Symphony in 1950. The second Symphony followed shortly after, in 1951; the recording by John Pritchard and the Liverpool PO was made in 1954 and came out it on a 10-inch LP, HMV DLP 1080, with no pairing. It was later reissued with Boult’s recording of Simpson’s First Symphony, on HMV’s 20 series, HQM 1010 (see entry on Discogs.com). Robin Orr (1909-2006) was a Scotsman, student of Casella and Boulanger and his Symphony in one movement, completed in 1963 (he subsequently wrote two more) appears to have been his most successful and oft-performed work.

The 1966 recording by the Scottish National Orchestra under Alexander Gibson was published as HMV ASD 2279, paired with Iain Hamilton‘s Symphony for Two Orchestras (now with the Violin Concertos of Goehr and Hamilton on another of those “British Composers” instalments, 5 86189 2) and 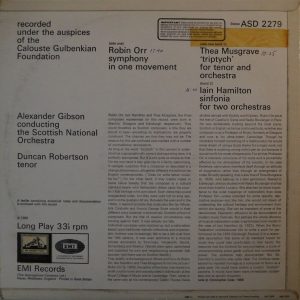 Fricker’s and Orr’s Symphonies share common features. They are couched in a language that is urgent and agitated, anguished and dramatic, modern for its days (at least Fricker’s, which were ten years before Orr’s) but not avant-garde, rhythmically robust, vaguely reminiscent of Hindemith (and some of the instrumental interplay also works to that effect) or the music written by the great American symphonists in those years (Schuman, Mennin, Persichetti are names that come to mind, from memory and without checking specifically) in the case of Fricker, more Sibelian (but less atmospheric and more dramatic) in the case of Orr. Fricker’s slow movement is in fact quite fast and march-like (true to the true meaning of “andante”), bringing again Hindemith to mind, but also the Giocoso delle copie of Bartok’s Concerto for orchestra. The finale develops a nice kinetic energy. Orr’s Symphony alternates moments with the same kind of kinetic energy and passages that are brooding and lyrical with chamber-like orchestration, and one of its distinctive feature is a recurring timpani ostinato.

These two symphonies are fine and enjoyable works, although they offer nothing revelatory. Not so with Simpson‘s first Symphony, dating, as Fricker’s, from 1951. I hadn’t listened to Simpson’s symphonies in a long while – I missed none of Hyperion’s instalments in their glorious complete cycle under Vernon Handley‘s stewardship, but that was completed a number of years ago. And there is so much to listen to, I rarely go back. My loss. This premiere recording by Sir Adrian Boult, made in 1956 (and originally published alone, as Fricker, on a 10-inch LP, HMV BLP 1092, but reissued ten years later paired with the Fricker Symphony) puts straight back in my memory – or rather, in my heart and guts – why I wax so enthusiastic about Simpson’s orchestral music. If some traces of Sibelius could be heard in Orr’s Symphony, one of Simpson’s avowed models is Nielsen (the others being Beethoven and Bruckner). I wouldn’t call Simpson’s First “Nielsen’s 7th” – because Nielsen’s 6th is a rather subdued affair, after his mighty 5th and even mightier 4th, the well-named “Inextinguishable”, and this might lead the uninformed reader to believe that Simpson’s is too. No, Simpson’s first is really Nielsen’s 4th times Nielsen’s 5th, a work of breathtaking power and energy, with passages of mesmerizing coloristic invention and a slow movement of great lyrical intensity. Sure, you can call it “derivative”, since the Nielsen influence is so obvious. But is it “derivative” when a composer takes what a previous composer has bequeathed, and brings it even further? With music of such power, epithets and words don’t have much meaning. Give me more of such derivativeness (and Simpson, with his cycle of 11, duly obliged). This first outing of Simpson in the symphonic genre is also a masterpiece of construction: like Orr’s Symphony, it is couched in one movement, subdivided in three clear-cut sections, fast-slow-faster, but its title, Symphony “in one movement”, has to be taken at face value: it is, indeed, written in a single “movement”, e.g. pulse or beat, and it is through the lenghtening and shortening of note values that Simpson manages to mould those three contrasting sections (the 4/4 beat of the slow movement becomes the bar of the finale). It shows an impressive mastery of symphonic form and issues. Though premiered by Launy Grondahl in Copenhagen in 1953, the Symphony is dedicated to Adrian Boult, who conducted the British premiere the next year; Handley/Hyperion (CDA66890, barcode 034571168906, paired with Symphony No. 8) naturally has the more spacious acoustics, but Boult’s orchestra is more present with significantly more visceral impact, and Boult has, by a wide margin, through the adoption of a significantly faster basic tempo, the extra bite and urgency, to the point that it takes your breath away. Handley sounds sluggish in comparison.

In sum: Fricker and Orr, interesting and enjoyable, but as a footnote so to speak in the history of 20th Century British music; but Simpson-Boult: essential.