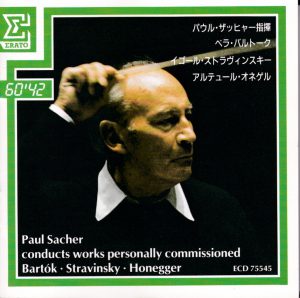 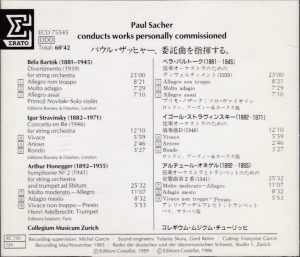 Recorded May & November 1985 at Studio 1 of the Swiss-German and Romansh Radio, Zürich.

Despite Paul Sacher’s legitimacy in this repertoire, a disappointing Honegger 2nd – but a fine Stravinsky Concerto in D
7 February 2018 (from notes taken in 2013)

Music in the 20th century wouldn’t be the same if it hadn’t been for patron and conductor Paul Sacher (see his bio on Wikipedia), and it would be far poorer. Imagine a world without Bartók’s Divertimento and Music for Strings, Percussion and Celesta, Sonata for Two Pianos & Percussion and 6th Quartet, Honegger’s symphonies Nos. 2 to 4, Christmas Cantata and La Danse des Morts, Martinů’s Double Concerto for strings, piano and timpani, Frank Martin’s Petite Symphonie Concertante, Strauss’s Metamorphosen, Stravinsky’s Concerto in D, Britten’s Cantata Academica, Henze’s Sonata per archi, Dutilleux’s Mystère de l’Instant… and that’s only a small sample.

So any document of Sacher conducting some of those works will be of invaluable significance. The three gathered here, recorded in 1985, are a sample from a 3-LP set that was released by Erato in 1986, 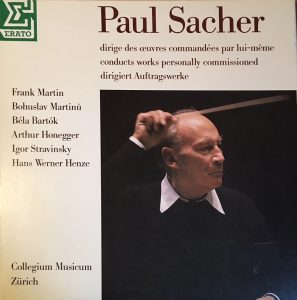 NUM 75297, which also had Martin’s Petite Symphonie Concertante, Martinu’s Double Concerto, Henze’s Sonata per archi and Honegger’s Christmas Cantata (the two latter not new recordings but reissues of commercial recordings from DG and Philips). The loss of the Martin and Martinů – none reissued to CD as far as I can tell – is a major frustration, but… being frustrated with what you don’t have, rather than happy with what you do have, is a collector’s mania. Let’s concentrate of what we’ve got.

In fact, Sacher’s rendition of Honegger’s Symphony for strings is disappointing. On the plus side, the sonics and lean textures of Sacher’s chamber orchestra provide great clarity of polyphonic textures, with each part more clearly heard than in any other recording save – no surprise – Jean-François Paillard 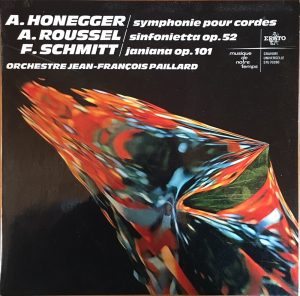 in circa 1966 or ’67 (review in the French magazine Harmonie, March 1967) with his Jean-François Paillard Chamber Orchestra (on Erato as well, LP STU 70280, sadly not reissued either on CD). It serves well Sacher’s lean and unsentimental – but not without sentiment – second movement, although he makes it more elegiac than truly intense. On the other hand Sacher’s conducting of the first movement Allegro is frustratingly placid and lacking tension. The Second Symphony is said to have been Honegger’s cry of protest against Nazi occupation of France, but here I can’t resist being snake-tongued, remembering Orson Welles’ famous line at the end of Carol Reed’s The Third Man, that Renaissance Italy was torn by wars and spawned Michelangelo, while Switzerland enjoyed centuries of peace and produced what? “The cuckoo clock”: Sacher’s Symphony for strings is World War II for Swiss consumption. I can’t really blame Sacher, or not Sacher only, for taking (based on nearly 20 recordings) one of the slowest Finale ever, with 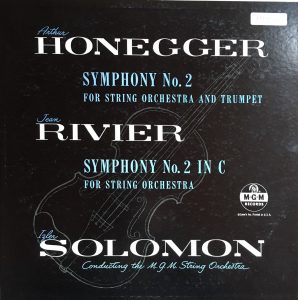 Izler Solomon with the M-G-M String Orchestra in circa 1952 (LP M-G-M E3104, not reissued on CD) and Fabio Luisi in 1999, because part of that blame must rest on the composer: Sacher (as Solomon before him and Luisi after) plays it remarkably close to Honegger’s indicated metronome indication of 100 dotted quarter notes per minute, making you realize how sluggish Honegger’s indicated tempo is. No wonder everybody else takes it faster: sometimes you must let musical instinct prevail over the score’s instructions (and Honegger himself, in the recordings of his own works, often departed from his own metronome marks). Despite the clarity of textures and Sacher’s efforts to have his strings articulate with bite, the result is heavily pedestrian, generating little sense of sardonism or nastiness at the beginning and hardly any feeling of jubilation, hope, or rays of the sun bursting through dark clouds when the trumpet finally erupts at 4:44. Munch, who also had direct contact with the composer and as much legitimacy in this piece as Sacher, took it at circa 130 at his fastest (live with the Czech Philharmonic live in May 1957, released by CD by Multisonic 31 0022-2 , and about the same in the famous 1952 studio recording in Boston for RCA), 115 at his slowest (both in his first and last recordings with Orchestre de la Société des Concerts du Conservatoire in 1942, and Orchestre de Paris in December 1967), and almost everybody else, Karajan (1969 DG), Baudo (1960 Supraphon), Ansermet (1961 Decca), Plasson (1979 EMI), Dutoit (Erato 1985), Schwarz (Delos), is in that league. And would Sacher’s Basler Collegium Musicum Players have at least invested their bow attacks with some tension! But no, they just play “politely”, ticking it off, again, like a placid cuckoo clock. That moderate tempi in the Finale do not need to be at the expense of tension was shown by Mariss Jansons (opening tempo circa 109, EMI 1993) and his Oslo Philharmonic strings: matter of string body and bow tension. When Sacher recorded Honegger’s Third Symphony “Liturgique” in Basel in 1992 (and the two early tone poems Chant de Joie and Horace victorieux), on Pan Classics, again his interpretation was rarely special.

Sacher’s Stravinsky Concerto in D is fortunately much better. In the first movement Sacher finds a fine balance of the lyrical, serenade-like aspect and the biting and explosive urgency. His central Arioso is played with the light touch of bows on strings that fully brings out the charm and elegance without any trace of heavy-footedness and/or sentimentality; it is one of the rare versions I’ve heard, with Stravinsky’s, that gets it right. The Finale may not have the same sonic impact as Stravinsky’s stereo recording for Columbia or, more recently, Salonen’s on Sony, but it benefits greatly from the very transparent, chamber-like textures, letting you clearly hear when it is solo and when it is tutti. Sacher’s pacing isn’t as urgently driven as Stravinsky’s either, but his slightly more laid-back approach conveys, again, a sense of elegance that is not inappropriate. The blanks between movements are a hair too long: Stravinsky instructed for the second and third to be played “attacca”, without break, and that’s how the composer does it in his two recordings, stereo for Columbia and mono for RCA.

I’ll return ASAP (which is who knows when) for Sacher’s take on Bartok’s Divertimento.