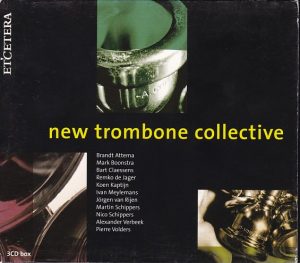 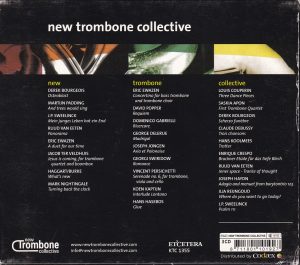 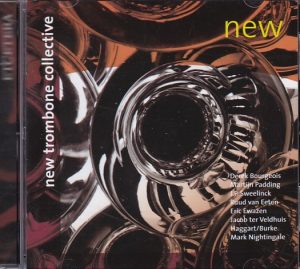 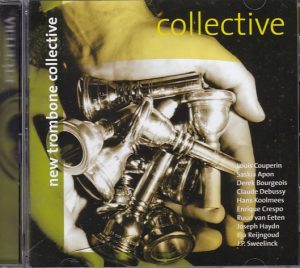 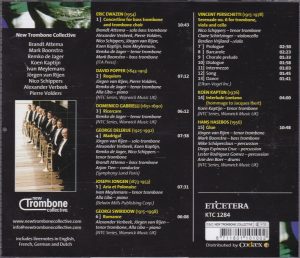 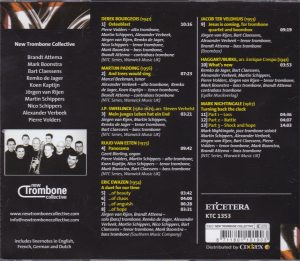 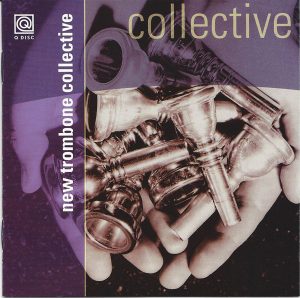 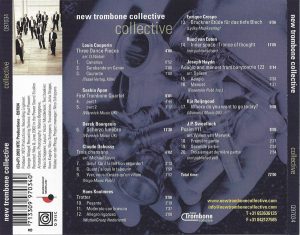 Nice concept. Quoting the liner notes of “Trombone”, KTC 1284, the first CD numerically in the set but the second chronologically (2005): “The New Trombone Collective (NTC) consists of nine trombonists who excel in their field and met whilst studying together at the Rotterdam Conservatorium. Currently holding leading positions in many of the finest ensembles and orchestras in the Netherlands, including the Royal Concertgebouw Orchestra and the Rotterdam Philharmonic Orchestra, these musicians are also bound by lifelong friendships and a common goal to seek out the limits of their instruments. During their studies was the playing together and learning from each other what kept them apart and inspired them to improve, and this need to work together was so overwhelming that in 2001 they initiated the New Trombone Collective.

This cd Trombone is a portrait of each member individually, by letting each of them choose a piece in which he feels comfortable or suits him best. With this, all of them give a personal touch to the trombone”. Add that this personal touch is also featured in the liner notes, since each of the trombonist writes a presentation of the piece he’s chosen and why he chose it.

So far so good. But most of the music – Ewazen, Popper, Gabrielli (that’s the one from Bologna, double L), Delerue, Jongen, Swiridow, Kaptijn – is safely tonal, mildly “contemporary” when it is contemporary, agreeable and immediately forgettable because nothing particularly original or inventive stands out. And finally the slightly thornier, slightly less safely tonal (and, in its way, often Jazzy) Persichetti comes as a welcome relief. Hans Hasebos’ mixture of Dance Music / Free Jazz “Glue” also stands out, whether you enjoy the style or not.

The contents of CD 2 (2007) & 3 (2003) are less individually “personal” (although some of the pieces gathered there were written specifically for the ensemble), and as a whole they are more satisfying, because there is more contemporary invention therein – though not in the arrangement by Enrique Crespo (himself the trombonist of the ensemble German Brass) of the jazz standard What’s New (CD 2-10) or Mark Nightingale’s Jazzband-like Turning back the clock, CD 2/11-13 (that it’s a heartfelt tribute to the composer’s father, who had just died of cancer, doesn’t make it more innovative music) and not in the, again, very safely and tritely tonal Ewazen’s A Duet for our time (CD 2/5-8) – music for conservative US college bands, sounding like it could have been composed 30 or 50 years earlier at the Eastman-Rochester School of Music. Derek Bourgeois’ Osteoblast, CD 2-1 (a medical term to designate a bone-forming cell and, if you didn’t get the pun, meaning “bone blast” as in trom-bone) is one of the pieces composed for the ensemble, and though breaking no grounds, it has a fullness of sound, a variety of moods (some of them clowning) and an enthusiasm which makes it exciting enough. No new grounds either but some fine and intriguing harmonic atmospheres in Ruud van Eeten’s Panorama for organ and two antiphonal groups of three trombones (CD 2-4). Basically a piece of repetitive dance music, Jacob ter Veldhuis’ Jesus is coming (CD 2-9), originally for recorder quartet and boombox samples, here adapted for four trombones, is enhanced by its dialoguing with “scratching” samples from baby talks and New York street vocal sounds.

But the striking composition here is Martijn Padding’s And trees would sing for tenor and trombone quartet (CD 2-2), from 2005. It is highly original in its choice of text – the description by a friend of Dylan Thomas of what would have been the opera that had been discussed one afternoon in 1953 with Stravinsky, that never went beyond that discussion – and a fine and haunting piece, with a very inventive vocal line and trombone score, sounding a bit like a modernized Oberon aria from Britten’s Midsummer Night’s Dream, but the stuff of nightmares rather than the stuff of dreams.

What is numerically Etcetera’s CD 3 was in fact recorded first and originally released by Q Disc, the label of the Netherlands Radio, Q 97034 (see barcode above). CD 2 is the logical sequel of that original CD, since some of the pieces recorded in 2007 – like Bourgeois’ Osteoblast, van Eeten’s Panorama, Enrique Crespo’s What’s New, were composed in reaction to NTC’s performances on the 2003 CD. I don’t find that the original outing offers as many highlights as its sequel, though. As much as I like the arrangements of baroque music played by the Canadian Brass and similar ensembles, it is not the pieces of Louis Couperin, Debussy, Haydn and Sweelinck that are the most interesting here, nor the Etude in the style of Bruckner of Enrique Crespo, nor is it , despite its occasional glissandos, the Broadway-jazzy piece of composer and arranger Ilja Reijngoud (he should have arranged Wagner’s Prologue for trombone octet, really!) Where do you want to go today? (track 17). Bourgeois’s Scherzo funebre may unfold effective brooding and funeral moods, turning again, in spite of the piece’s title, to slightly clowning, it still gives me the impression that this has been heard 1,000 times before already (the music of Arthur Honegger came to mind), and the first movement of Saskia Apon’s First Trombone Quartet is much in the same vein (the paragraph about her in the liner notes is omitted in the English translation). So what’s left? The dynamic and pointillistic second movement of the same, the atmospheric and mildly dissonant Inner space – Trance of thought of Ruud van Eeten, written for the ensemble (track 14), and Hans Koolmees’ Trotter (tracks 10-12), a little more dissonant (but still very accessible), even more atmospheric and exuding fine drama.

I prefer it, then, when the choices of the NTC are less “personal” and more collective. But really, except for Padding’s very inventive piece, this is best reserved to fans of the trombone.