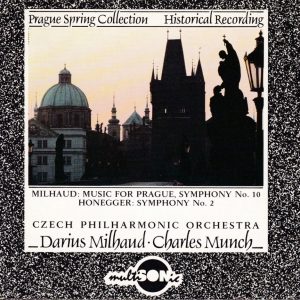 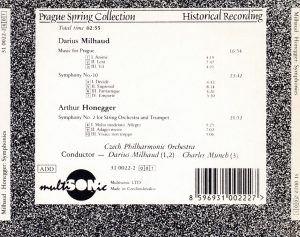 Milhaud: recorded 20 May 1966. Honegger: 17 May 1957 . Smetana Hall, Prague
Note: the disc is listed on the Amazons under various entries, corresponding to distributors’ barcodes. It’s “legitimate” entry, corresponding to its actual barcode, is the only one that won’t yield when researched using the obvious criteria, “Milhaud Honegger Munch Multisonic” or “Milhaud Honegger Multisonic”, because it is so badly listed. Search the barcode. 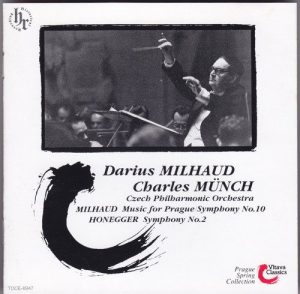 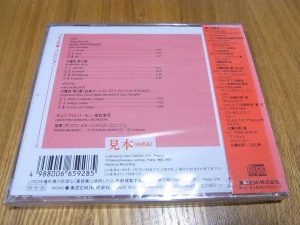 Even for Munch, an extraordinary account of Honegger’s Symphony – but still, Milhaud is the disc’s main interest
Originally posted on Amazon.com, 22 March 2013

Munch was, with Ernest Ansermet, Paul Sacher and George Tzipine, one of the early champions of Honegger (and so was Koussevitzky, but lamentably there are no recorded testimonies of him in the music of Honegger), and he championned no composition more than the second Symphony for strings, as far as number of recordings can attest: he made three in the studio, first in war-time occupied Paris with Orchestre de la Société des Concerts du Conservatoire (15 & 16 October 1942, with complements recorded on March 1, 1944), shortly after the May 1942 world premiere in Zürich under the baton of its commissionner Paul Sacher (see my review of La France Resistante on Casvalelle), then with the Boston Symphony Orchestra from March 1953,  RCA GD60685 (Europe) / 09026-60685-2 (US), and the last one with Orchestre de Paris from December 1967 on EMI, shortly before the conductor’s death. To these, the CD era added at least two more live performances, this one with the Czech Philharmonic Orchestra from 17 May 1957, and one with Orchestre National from September 1, 1964 (Disques Montaigne, MUN 2051, reissue Valois V-4831). And the great online discographies of Munch by Benoit Duhoux and Sylvain Gasser list even more live performances.

Among these, the two most significant ones or those with Boston, with its great mono sonics and Munch’s urgent pacing (and the pairing of the 5th Symphony, recorded shortly after its world premiere by the conductor), and Orchestre de Paris, with its great stereo sonics and less urgent pacing – that is, comparatively to the earlier Munch, but still more urgent than anyone else. Because of its antiquated sonics and less-than-pristine orchestral paying, the war-time recording is a mere historical document, albeit an invaluable one, and not in small share on account of its pairing, Munch’s extraordinary recording of Honegger’s La Danse des Morts, with the hallucinated narration of Jean-Louis Barrault.

Some interpreters never change their interpretive conception, and when they re-record a piece three decades later it sounds exactly like the first time, sonics aside. Not entirely so with Munch, a very instinctive and improvisatory conductor, with whom every performance was different, although many basic parameters of his approach to Honegger’s Symphony for strings did remain the same in the course of 35 years. Except in his war-time premiere recording, he always took an urgent introduction to the first movement (notated “Molto moderato” by Honegger), bringing the music an undercurrent of inquietude far removed from the mourning mood conveyed by everybody else at a far slower tempo (compare Munch’s 1:46 in Boston to Karajan‘s 2:28); he always hurled into the Allegro proper with unleashed fury (the movement alternates between the mourning and the biting), although in both his Paris studio version, the first and the last, he was slightly more laid-back than in Boston, and the same is true with the Finale. Finally, Munch always extended that urgency of pacing to the slow movement, like no one else, turning it not into the mourning dirge everybody else makes it (and, it will come as no surprise, Karajan is here among the most extreme) but into a cry of revolt, or perhaps an omen of the impending doom. Here again, Munch’s final testimony with Orchestre de Paris is perceptibly more spacious, with dramatic tension coming more from the aching phrasings of solo cello than from urgency of pacing itself. But make now mistake, even what for Munch is “spacious” still bolts ahead of everybody else.

It would have seemed that, in terms of urgency and raging bite, Boston could never be bettered. Yet, here, live with the Czech Philharmonic Orchestra four years later, Munch has even marginally more in the two outer movements, generating breathtaking tension. The middle movement is very comparable to Boston. The Czech Philharmonic responds formidably, making this, if not Munch’s “best” version, at least the most furious and intense. Nonetheless, it must remain a complement to both Boston and Paris, reserved to the most serious affficionados of the conductor and completists, because of the audience noises inherent to a live performance and its harsh sonics, not as clear and detailed as RCA’s for Boston (to say nothing of Paris’ stereo).

So the two Milhaud compositions, Music for Prague and the 10th Symphony, will be the main interest of this disc, especially since both are conducted by the composer on May 20 1966 and the first was a world premiere (the Symphony was composed in 1960 for hundredth anniversary of the State of Oregon). The composer was 74 then and confined to a wheelchair, yet he summoned sufficientt energy to get on the podium and conduct. I haven’t always warmed up to the music of Milhaud – I hear something contrived in his all-pervading humor that I find very artificial, and his typical polytonality can be grating on the ear. But, with more listening I must be changing, and I’ve reviewed lately works of Milhaud that I’ve enjoyed (like Pacem in Terris and L’Homme Et Son Désir on Vanguard Classics). Same here and it is, I think, because there is more in these two works than Milhaud’s contrived joy. Is is, as always, present, but both works alternate between that mood and much more powerful, violent and dissonant utterances. They sound really, at times, like “contemporary music”, and suddenly the sunny Milhaud from Provence breaks in. I like the combination, for its very unpredictability, even if the slow movements of both compositions are somewhat diffuse and rambling. Still, if you’ve chanced here without really knowing what the music is about, be aware that this is not your typical, jolly, entertaining and jazzy Milhaud of Boeuf sur le toit, Création du Monde and Saudades do Brasil. Milhaud’s peculiar melodic invention and polytonal harmony is harder to take and requires some getting used to.

That said, again because of the harshness and sonic limitations of the 1966 recording (it sounds like good mono rather than stereo to me), these versions must be taken as documents. The “normal” listener might prefer to explore more recent stereo versions, like the one by Alun Francis on cpo 999 354 2 (barcode 761203935420)  for the Symphony. There is also another Milhaud-conducted version of the 10th, from September 1969, with the BBC Symphony Orchestra, on BBC Classics  15656 91512 (barcode 5015656915122, paired with L’Homme et son Désir, Musique pour l’Indiana and Satie’s Jack in the Box). The label Praga also issued a CD, PR 250 012, “The Darius Milhaud Centenary” vol. 3, barcode 3149025056535, with Symphony No. 10, Musique pour Prague, Concertino d’Hiver and Hommage a Comenius. The 10th is another performance, by Zdenek Kosler with the Czech Philharmonic, from 20 April 1970, but the one of “Musique pour Prague” is the same world-premiere performance as here. I have those discs in my collection by haven’t had the time to hear them yet.