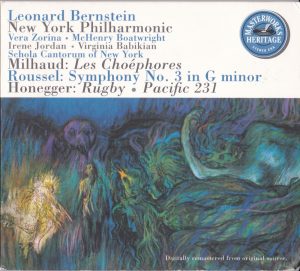 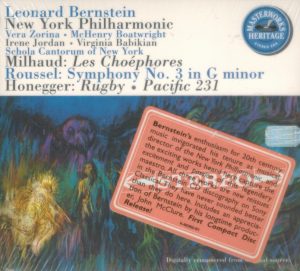 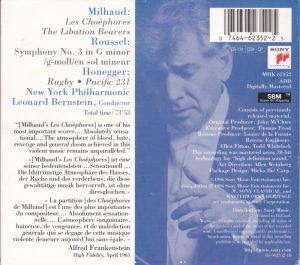 Milhaud’s Les Choéphores op. 24 (The Libation-bearers) is a strange work. Written between 1913 and 1915, it is Part II of a trilogy on the Agamemnon-Electra-Orestes story, framed by Agamemnon op. 14 (1913-1914) and Les Euménides op. 41 (whose composition was begun in 1917 and completed only in 1924). Agamemnon and Les Choéphores are in fact the incidental music (“musisque de scène”) for the plays adapted by the famous French poet and playwright Paul Claudel from the two first tragedies of Aeschylus’ Oresteia, while Les Euménides is a fully-fledged, three act opera. Les Choéphores deals with the Electra story, the same episode put to music by Strauss. Milhaud was a young composer of 21 when he began work in 1913, but his typical style is fully there already, the vocal writing very declamatory and closely modeled after the rhythm of the spoken language but with some occasional twists, the bizarre and grating polytonal harmonies. The incidental music starts with a “funeral vociferation” (translated here by “clamor”), and the words are pretty dramatic (“On my cheek the crimson glow / Doth shine, that hands have printed fresh / With furrowing nails on tender flesh”) but with Milhaud it sounds like a hymn of joy. Masochist libation-bearers maybe. In fact Milhaud was probably trying to “unsentimentalize” the music, and it is interesting at least for that, the very contradiction between words and music. Still, Milhaud certainly doesn’t appear here as a natural-born melodist, although, getting used to the composer’s particular style of composition, at least you recognize familiar Milhaud, to the hilt. But Choéphores does stand out for its moments of fine lamenting pathos (track 2 “Libation”, soprano over wordless chorus) and for its powerful incantations (track 3). But above all, Choéphores features three extraordinary passages of powerful and violent Sprechgesang (spoken, rhythmically notated) over percussion accompaniment and chorus singing onomatopeia, and at times even blowing whistles (track 4 “Présages” / “Omens”, 5 “Exhortation” and the short “Conclusion”, track 7). This is Carl Orff (and Orff’s Antigone especially comes to mind, see my review of Inge Borkh and Ferdinand Leitner’s reference recording, DG 437 721-2) decades before Carl Orff “invented” (or copied from Milhaud?) the typical Carl Orff style, and really here Milhaud is decades ahead of his time.

For reasons unknown to me (but which might have had to do with this very radicalism), there elapsed a long period of time between composition and premiere performance of each part of the trilogy: almost fifteen years for Agamemnon, premiered in 1927 (with the Straram Orchestra under its founder Walter Straram). Only exceprts of Choéphores were played in 1919 under Felix Delgrange, and the first staged performance happened in Brussels in 1935. Only the finale of Euménides was performed in 1928 under Louis de Vocht, the first complete performance took place only in 1949 in Brussels under Frans André. The first stage performance of the complete trilogy took place at the Berlin Deutsche Oper in April 1963 under Heinrich Hollreiser. All this information comes from the website of Bibliothèque Nationale de France.

Not that Choéphores is a frequent encounter on disc – in fact, I am aware of only two recordings, this one by Bernstein, recorded in October 1961, preceded by Igor Markevitch leading French forces in March 1957 on DG, and thereafter everybody apparently considered that the deed had been done and enough tribute had been paid to Milhaud’s composition – but at least it has been recorded; never so with the two other pendants of the trilogy. I heard the complete cycle once on the French radio (I probably have a tape of it somewhere in my cellar, surely demagnetized by now), and the two others didn’t sound stylistically inferior or even different from Les Choéphores. It’d be nice if someone completed the task and recorded the complete cycle. Hello, Timpani, anybody listening?

Markevitch conducted a great performance, with a fine cast of singers (with Heinz Rehfuss showing small traces of strain in the upper registers), but it was marred by DG’s antiquated sonics: 1957 and still mono, when RCA and even EMI recorded in stereo since 1955, blurring many orchestral details (and especially frustrating in the percussion accompaniment of the three Sprechgesang movements) and depriving the music of a lot of its impact. Between Markevitch and Bernstein and DG and Columbia, four years but a world’s difference: great stereo sonics and great impact. But there is more to Bernstein’s recording than only its sonics: like Markevitch, Bernstein leads a fine performance, usually quite close in its choices of tempo to Markevitch, although not as taut, urgent and biting. As a native French-speaker, I can vouch that, while the French accents of his all-American cast of speaker, singers and chorus are not entirely devoid of americanisms, they sound nonetheless remarkably genuine, except for McHenry Boatwright as Orestes (he sings only in track 3, “Incantation”, the longest movement). While Markevitch’s Heinz Rehfuss showed small traces of strain in the upper registers, Boatwright’s voice is impressively big and firm but with nothing of the nobility of Rehfuss’, and he lets a few small rhythmic inaccuracies creep in. Irene Jordan as Electra has a powerful dramatic soprano voice, but with a chesty lower register, and the same is true with contralto Virginia Babikian. Speaker Vera Zorina may not be quite as effective dramatically as Markevitch’s Claude Nollier (and with a few minuscule rhythmic inaccuracies also – but Nollier had some too) but she’s dramatic enough. Bernstein recorded Messiaen’s Trois Petites Liturgies de la Présence Divine a mere month after Les Chopéhores (it was the original LP companion of the Roussel Symphony, and has been reissued to CD on Sony “Bernstein Century” SMK 61845 “Music of Our Time” with works of Ligeti, Feldman, Denisov, Schuller and four Improvisations) and the ladies from the Choral Arts Society sounded much more awkwardly American than the Schola Cantorum of New York here. The language coach is, besides the conductor and the sound engineer, the unsung hero of this recording.

One drawback of this otherwise lavish Masterworks Heritage edition is that it provides a synopsis but not the complete text with translation, which, given the nature of the composition, is close to providing nothing, and for non-French-speaking audiences (and even French speaking ones) it will allow for little more than listening to the recording as “pure” music, with no clue of what exactly is being sung. DG’s “Originals” for Markevitch does provide text and a competent if not entirely accurate translation (but strict accuracy is well-nigh impossible with the highfalutin poetry of Claudel), wich is a definite advantage. Because of the marginally better cast of singers and speaker and the more authentic French, the ideal version of Les Choéphores would probably be Markevitch’s with Bernstein’s sonics, but Bernstein’s is still a fine one and Markevitch’s sonics make it, alas, no more than a document.

It always makes me cringe when I read a review that claims that a recording is “the best ever”, when it is clear that the reviewer has heard only two or three, if even more than one. Well, I won’t claim to have heard all the recordings of Pacific 231, probably Honegger’s most popular and oft-recorded piece, but I’ve heard more than a dozen and most of the significant ones, from Piero Coppola’s premiere recording in 1927 to Järvi’s on Chandos and Mariss Jansons‘ on EMI, and including the composer’s (1930) and those of the early and late champions of Honegger: George Tzipine, Ernest Ansermet (surprisingly Munch never recorded it and no live has surfaced either), Serge Baudo (a complement to his complete traversal of the symphonies for Surpraphon, and an excellent version in its own right), Michel Plasson, Charles Dutoit. So I can state with a measure of confidence that Bernstein’s 1962 recording is, to this day, unsurpassed. It is a combination of, again, Columbia’s stupendous sonics, that let you hear clearly every strand of Honegger’s dense and loud orchestration as no other, before (it goes without saying) or even since, of the Newyorkers’ hair-raising virtuosity (Pacific, as Rugby, is a Concerto for Orchestra in miniature), and, paramount, of Bernstein’s sheer drive. Describing the kind of machine he had had in mind, Honegger said that “as subject” he had “chosen the locomotive-type ‘Pacific’, symbol 231, for heavy train of high speed”. But since George Tzipine in 1953, everybody has more or less insisted on the weight and power, to the detriment of speed. The early pioneers, Coppola and Honegger, and Bernstein alone among all subsequent recordings, didn’t see it that way, making Pacific a close cousin of Mossolov’s Iron Foundries.

There is less propulsive energy in Bernstein’s Rugby, less for instance than with Scherchen in 1954 (on Westminster) and even Honegger in 1930 (see link above), at least until he reaches the “Allegro vivace” section at 4:39; and then there is a much. But what makes Bernstein superior to his predecessors and many of his successors are, again, the astounding sonics, lending incomparable instrumental character to the woodwinds and brass, and the fabulous virtuosity of the orchestra. With the CD timing 73:46, a pity that they couldn’t fit the Pastorale d’Eté which came with the two others on the original LP (the flip side was Debussy’s Rhapsodies). The booklet nicely reproduces the cover photos of the original LPs with Roussel’s 3rd Symphony (paired with Messiaen’s Liturgies) and the Honegger-Debussy program, while the CD’s cover is adapted from the original Milhaud LP (which had no filler). Pastorale d’été has been reissued (with Pacific and Rugby, and Debussy’s Rhapsody for saxophone) on Sony’s “Bernstein Century” SMK 60695, “20th-Century French Masterpieces”.

I’ll return whenever I can to Roussel’s Symphony.