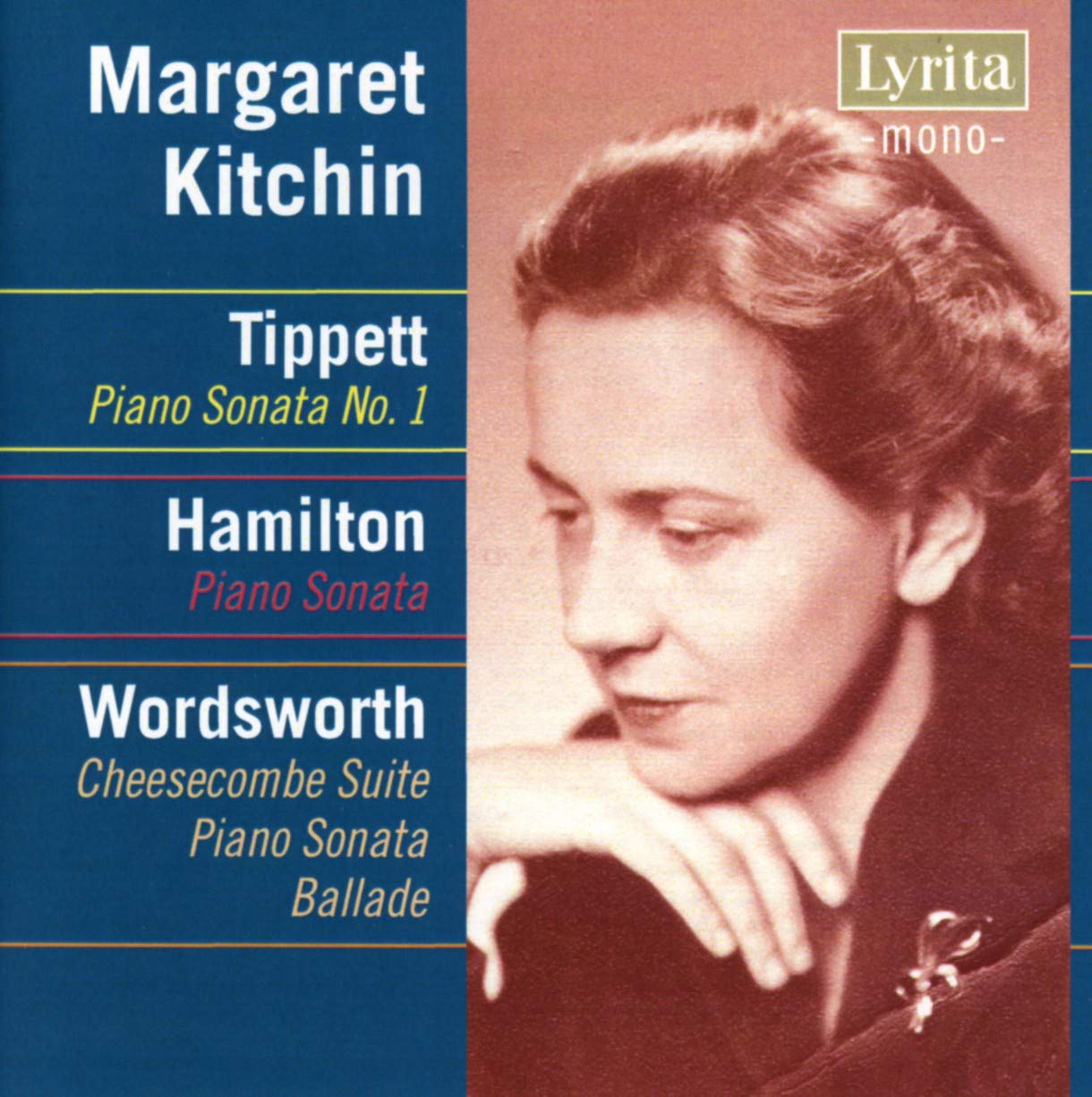 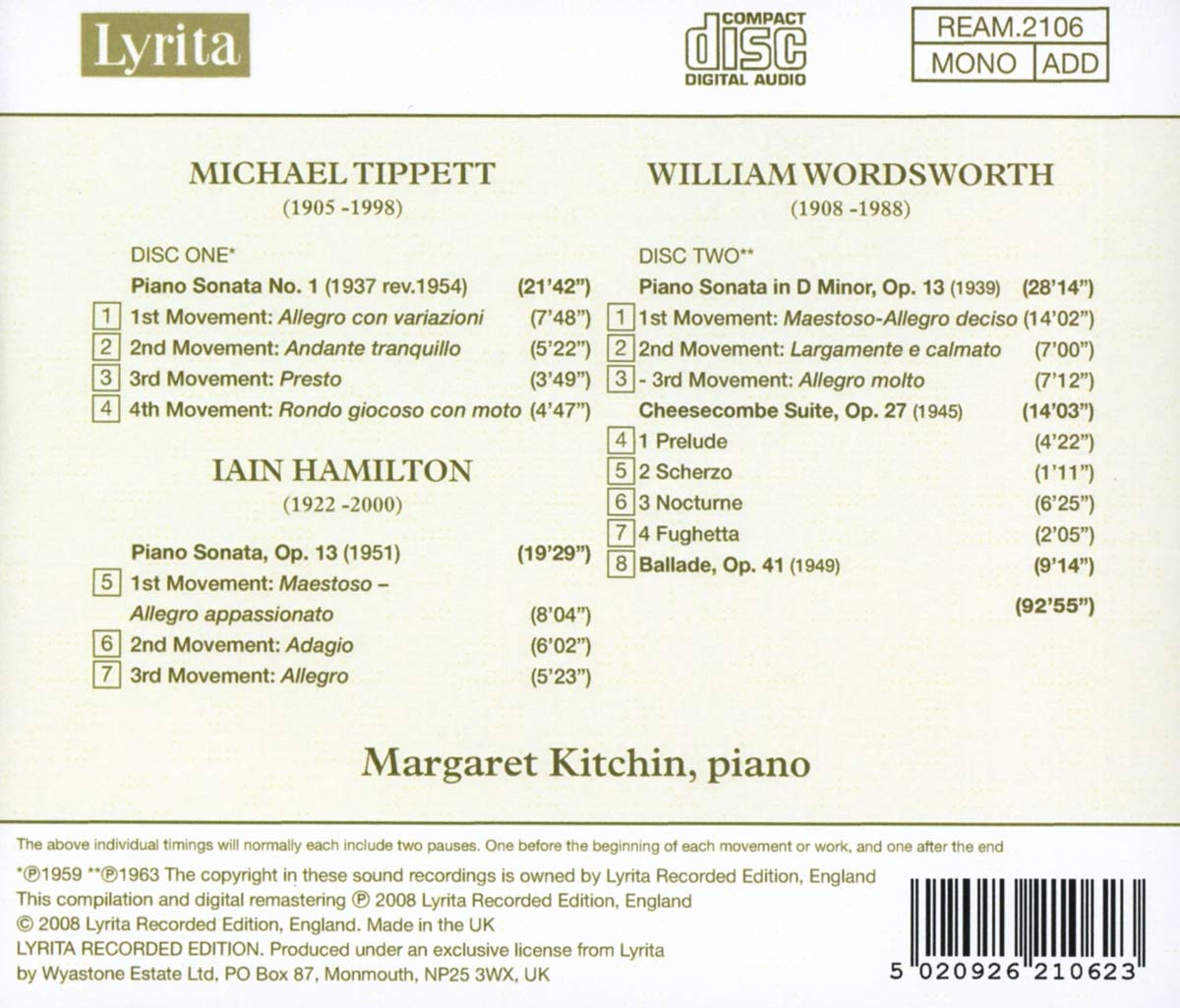 Important historical reissues, of recordings made (all in mono) in 1958 (Tippett, Hamilton), 1959 and 1960 (Wordworth). Pianist Margaret Kitchin (1914-2008) was roughly of the same generation as these composers (Tippett 1905-1998, Hamilton 1922-2000, Wordsworth 1908-1988) and, in her time, a great champion of British contemporary music (the list of the composers she played, as mentioned in the liner notes, makes up a “who’s who” of the British 20th Century scene: Peter Racine Fricker, Elisabeth Lutyens, Thea Musgrave, Alexander Goehr, Priaulx Rainier, Humphrey Searle, Alan Bush, Richard Rodney Bennett). Tippett’s Second Sonata was dedicated to her and premiered by her. She made very few commercial recordings – the LP with Tippett’s and Hamilton’s Sonatas was her debut disc, and a pity she never (to the best of my knowledge) recorded Tippett’s Second.

Tippett was a late blossomer to composition and his Sonata, composed in 1937 (and revised in 1942) was his second major outing, after the first String Quartet from 1935 (the latter thoroughly revised before publication in 1946). Kitchin’s recording was not a premiere on disc. That had been made, as far back as 1941 (before the revision), on a semi-private recording, by another woman and great champion of contemporary music and the Sonata’s premiere performer in 1938, Phyllis Sellick (dedicatee of the composer’s Fantasy on a Theme by Haendel for piano and orchestra from 1941). The recording has been reissued by NMC on a great CD of Tippett historical recordings. The Lyrita liner notes contend that it is “a brilliantly eclectic potpourri of popular and classical sources and influences that would be synthesised and assimilated to a greater extent in his later works”, and the very thorough liner notes to the NMC historical collection are even more explicit and come up with a bag of comparisons and possible influences on Tippett’s composition: Scarlatti (here an influence recognized by the composer himself, inasmuch as “the music is percussive enough to make us fully aware of the fingers on the keyboard and the hamers at the strings” – lines drawn from the liner notes to the EMI recording by John Ogdon, in a 2-CD set gathering great Tippett recordings from the 1960s), Beethoven, Stravinsky, Janacek, Bartok and even (from reviews published when the Sellick recording came out) Hindemith and Poulenc. Anyone else?

I don’t buy that at all. What makes Tippett’s first a remarkable work, if not yet as uniquely and unmistakably”Tippettian” as the composer’s later works, is how FREE of influences and reminiscences and how already entirely personal it is. Tippett described how he had tried to escape the “heavy” and “too serious” Germanic models, and he does. That the first movement, a theme and variations, is written in a (mainly) 5/4 time signature doesn’t make it Bartokian at all, it has none of that Bartok rustic and vigorous pounding, and although it does have its moments of brash fortissimos, it is primarily lyrical and whimsical, and the slightly tipsy 5/4 signature and whimsical imagination in the variations (with the fifth inspired by Gamelan music) give it a melodic shape that is entirely unique and, indeed, entirely NOT indebted to the Germanic and expressionist models. The slow movement is a somewhat austere but fascinating exercise in two-part polyphony based on a Scottish folk-song. Sure you can invoke the Beethovenian model (the 9th symphony comes to mind) in the exuberant Scherzo, a dashing Presto in (mainly) 6/8 rhythm of tremendous energy (and Tippett would write other such movements in his symphonies, like Walton in his own First), but it is entirely transmuted in the composer’s language. The boisterous and vigorous Finale shows influences of Jazz/Ragtime, but also of something like hop-scotch dance, again transmuted in the composer’s personal language. There’s a gaiety, an “upbeat-ness” and insouciance that will seldom be found in Tippett’s later works. If you think of Stravinsky’s neo-classical piano works, the Stravinsky comparison is OK, but only inasmuch as you equate “Stravinsky” and “entirely original in its language, following no other model that its own”.

Despite the shortcomings of the mono sonics and underlying tape hiss, Kitchin delivers a great reading, a far cry from the kind of massive pounding of John Ogdon when he recorded it a few years later, with more delicacy, lyricism, lightness of touch and elf-like whimsicality. The sense of a theme and variations is clearly conveyed in the first movement, more than Ogdon does. She also displays a better coloring of voices and delineating of Tippett’s polyphony in the austere slow movement. But don’t infer that it is an exclusively lyrical and gentle reading, and that Kitchin lacks a measure of pounding power. Her Scherzo and Finale may not be as impressive as Ogdon’s and the impact more limited by the mono sonics, but she doesn’t lack dash and power. In terms of sonics this is far from the ultimate, but a an interpretive yardstick it remains as valid as ever.

Despite a huge output including eleven operas and stage works, Scotsman Iain Hamilton never made it to true recognition and prominence during his lifetime, maybe because during the 1960s and 1970s he lived and taught in the US, or maybe because his works were too modern for the British audiences in those years (in the mid-1950s he embraced serialism), but not enough for those on the continent favorable to the most cutting-edge avant-garde. Or maybe simply because he was an avowed homosexual and outspoken person, never shy at expressing his contempt for his fellow British composers, especially Britten (Hamilton chided not only his music but also his alleged attraction to young boys). But his first Sonata, composed in 1951 and premiered by Kitchin, is also a great and powerful work, although less original than Tippett’s and (and because) following more the German expressionist, serious, pounding and anguish-ridden models. But it has its moments of “Tippettian” whimsicality as well. The Finale starts like a Prokofiev Sarcasm, although it too evolves into very powerful music.

The Wikipedia entry for Hamilton is very poor on the composer’s bio (but apparently quite thorough on his catalog of compositions) but there is a fine biographical sketch by Paul Conway on musicweb-international, and an even more thorough survey by David Wright on his website wrightmusic [note for the 2022 repost: that, it appears, is now gone]. The music of Hamiton is VERY BADLY represented on disc, there’s only a handful of recordings available on CD (and I’ve reviewed the main other, on

EMI’s British Composers series), so far as I can ascertain none of his four symphonies have been recorded, his two other piano sonatas, his concertos other than the early and not entirely significant Violin Concerto, to say nothing of his operas. The symphonies of Humphrey Searle have been recorded by cpo, Chandos has offered a fine 2-CD survey of the music of Malcolm Williamson: a major rediscovery of Hamilton needs to happen. 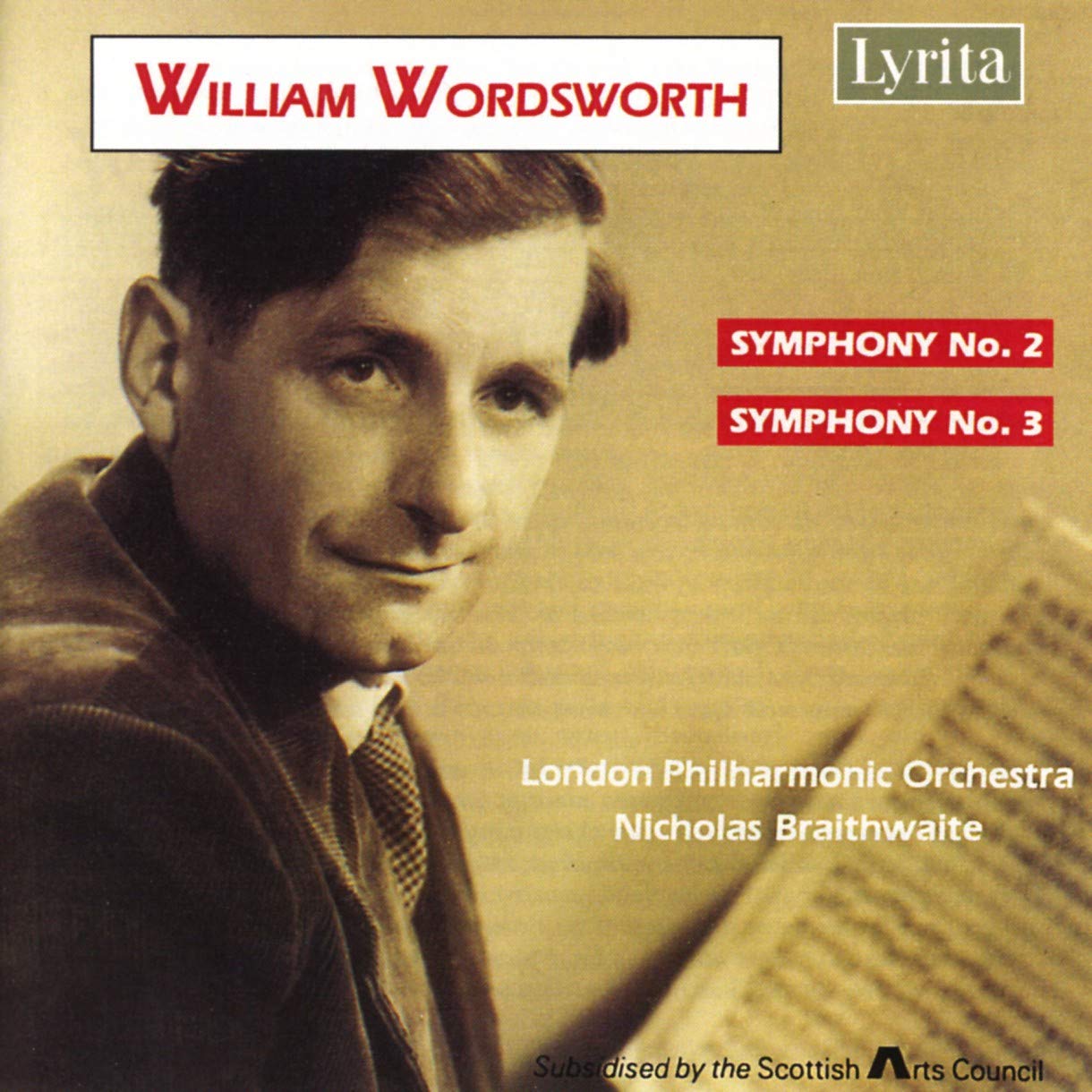 William Wordsworth (a descendent of the poet’s brother) is not much better represented on disc – at least he was fortunate that Lyrita recorded two of his symphonies (Nos. 2 & 3, SRCD.207, barcode 5020926020727) – but I’m not so convinced by the sample of his music given here. Tippett and Hamilton are not “radical” composers but their respective sonata is nonetheless harmonically inventive and very personal, not really calling to mind previous models and influences. Wordsworth’s 1938 Sonata on the other hand starts with big and rather trite and hollow (I find) neo-romantic gestures that could be from some sub-par heir of Godowsky, or from a Janacek who’d never have developped his uniquely personal style, and in other spots sounds like early 20th century “musique française” – by, say, Chaminade rather than Debussy, Ravel or even Dukas (and I may be unfair to Chaminade, I don’t know her music so well). There are some atmospheric moments in the slow movement, but I find the inspiration there rather diffuse, possibly for want of a truly distinctive material to begin with. The scherzando and bouncy Finale is more original and ear-catching – at least as long as Wordsworth keeps it in that mood and style, but the contrast he brings at 4:30 reverts to the earlier neo-romantic gestures that aim for atmosphere but which I find only trite. The 1945 cycle Cheesecombe Suite is a bit more original. Not so much in the sombre and brooding Prelude, which can vaguely evoke the grim Shostakovich, but in the Scherzando moods of the Scherzo (track 5) and Finale in the form of a Fughetta (track 7). The chromaticisms of the, again, sombre and brooding Nocturne vaguely recalled Honeger’s Arioso on BACH, or Scriabin’s 2nd Prelude op. 74, but I found it not as distinctive as either. Ballade from 1949 alternates the funeral-despondent and somewhat diffuse recitatives met already in the Sonata and Suite and apparently very typical of the composer, and more pounding but still grim passages, now more fierce and dissonant than in the earlier compositions. The 1959 and 1960 recordings are still and mono and come with even more noticeable tape hiss than the Tippett/Hamilton program.

Good liner notes, with at one point THE typo that should have carefully been avoided: Kitchin spelled Kitchen. Apparently that’s not where she busied her days. TT 93:55, which makes the set not so generous for a twofer.