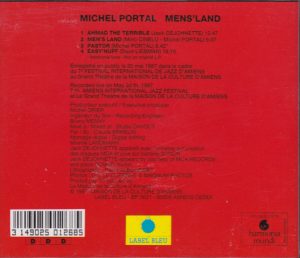 Surely an exciting evening, back in 1987, for fans of contemporary jazz
12 January 2019

Not that I’m much interested in jazz, which I find often formulaic – theme, solo, tutti, solo, tutti, solo, tutti, always the same formula – and, to my ears, not as rewarding as Bach and Mahler, sorry fans of jazz, no offense made. And there’s so much great music to hear in classical… I’ll tackle jazz when I’m 500 and have heard all the classical worth hearing.

But I was doing compiling a discography of the early releases of Harmonia Mundi – not just as a label, but as a distributor of other labels as well, and there was this early French label specializing in jazz, in the late 1980s, Label Bleu, and this CD by clarinettist/saxophonist Michel Portal, that sold cheap, so I bought it. Of course I’d be interested by Portal, who’s always straddled contemporary jazz and classical/contemporary, so why not.

So, Portal here “invites” musician friends: drummer Jack de Johnette, saxophonist Dave Liebman, percussionist Mino Cinelu, guitarist Harry Pepl, double-bassist Jean-François Jenny-Clark (links to entries on Wikipedia if, like myself, you are not entirely familiar with some of those names), in a live recording given  at the 7th Internation Jazz Festival of Amiens, on May 30, 1987. Where was I and what was I doing, on May 30, 1987? The jazz is what you expect of Portal, verging on “Free/contemporary Jazz” and even the contemporary/classical, with saxes and clarinet often emitting “dirty” and raucous sounds much favored by contemporary classical composers. I like the presence of the electric guitar of Harry Pepl, not an instrument so commonly heard in jazz, as far as I can tell. Men’s Land, track 2, with Portal on bass clarinet and Mino Cinelu at the percussion, is a great duet with a wide array of percussion timbres. The credits of track 3 can’t be complete, because I hear percussion and two saxophones. Likewise, double-bass plays on track 4, “Easy’nuff”, so Jean-François Jenny-Clark must be playing also. I wonder of Mino Cinelu doesn’t play also on track 4. Jack de Johnette is credited as the only percussionist, and it may be so, but there’s an instrument reminiscent of the Indian tabla which gives the music a vaguely “raga” character in its slow introduction.

All that  makes for a pleasant listening and certainly an exciting evening  at the International Jazz Festival in Amiens on May 30, 1987, but I wouldn’t stake my hand that this is as longlasting as Bach and Mahler. No liner notes, just photos (and no captions, so if you don’t know who is who, you don’t), TT 48:45.