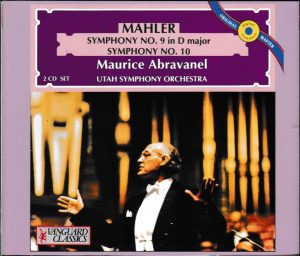 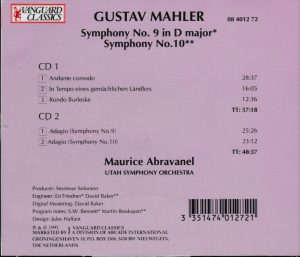 Note: in the 1990s the distribution rights of the Vanguard catalog were shared between the Omega Record Group (for the US), the company of Vanguard founder Seymour Solomon, and Arcade, a Dutch company, for Europe. The US equivalent of 4012  should have been Vanguard OVC 4012, barcode 0723918401225 (most of the other symphonies were indeed published in the US under the previous label numbers), but I haven’t found a listing. Omega finally released Abravanel’s Mahler 9th (and Adagio of the 10th) in 1995, see below 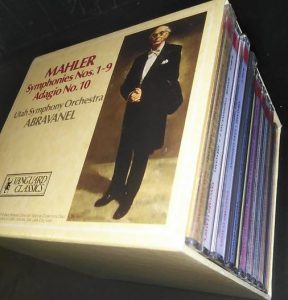 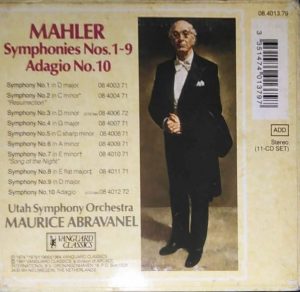 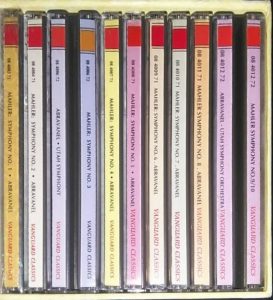 Vanguard (Arcade France) 152 012 (1991?), barcode 3351471520120
Note: dubious. Listed on the website of the usually reliable Melomania, but with no cover photo. No other trace found. Tentative dating is based on attested adjacent label numbers 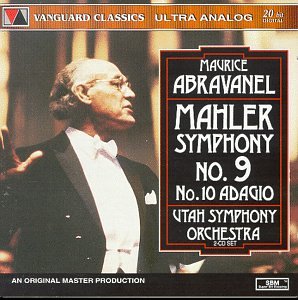 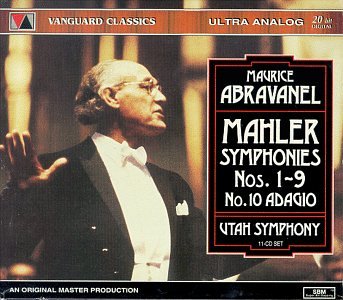 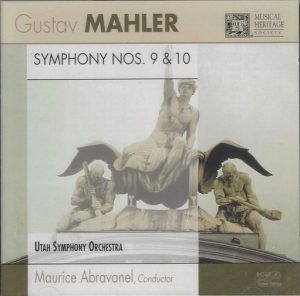 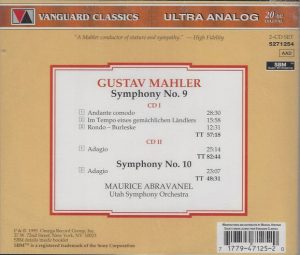 In 2004 the label Silverline Classics issued a number of Vanguard recordings in the DVD-audio format, as well as on dual DVD/CD, including some of Abravanel’s Mahler (Symphonies 1 to 6), with a plan to issue the complete cycle, but I haven’t found trace of 7th to 9th, so I infer that the series was, alas, discontinued before reaching completion. About the Silverline reissues, see this. 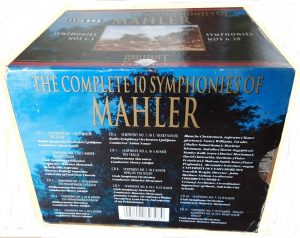 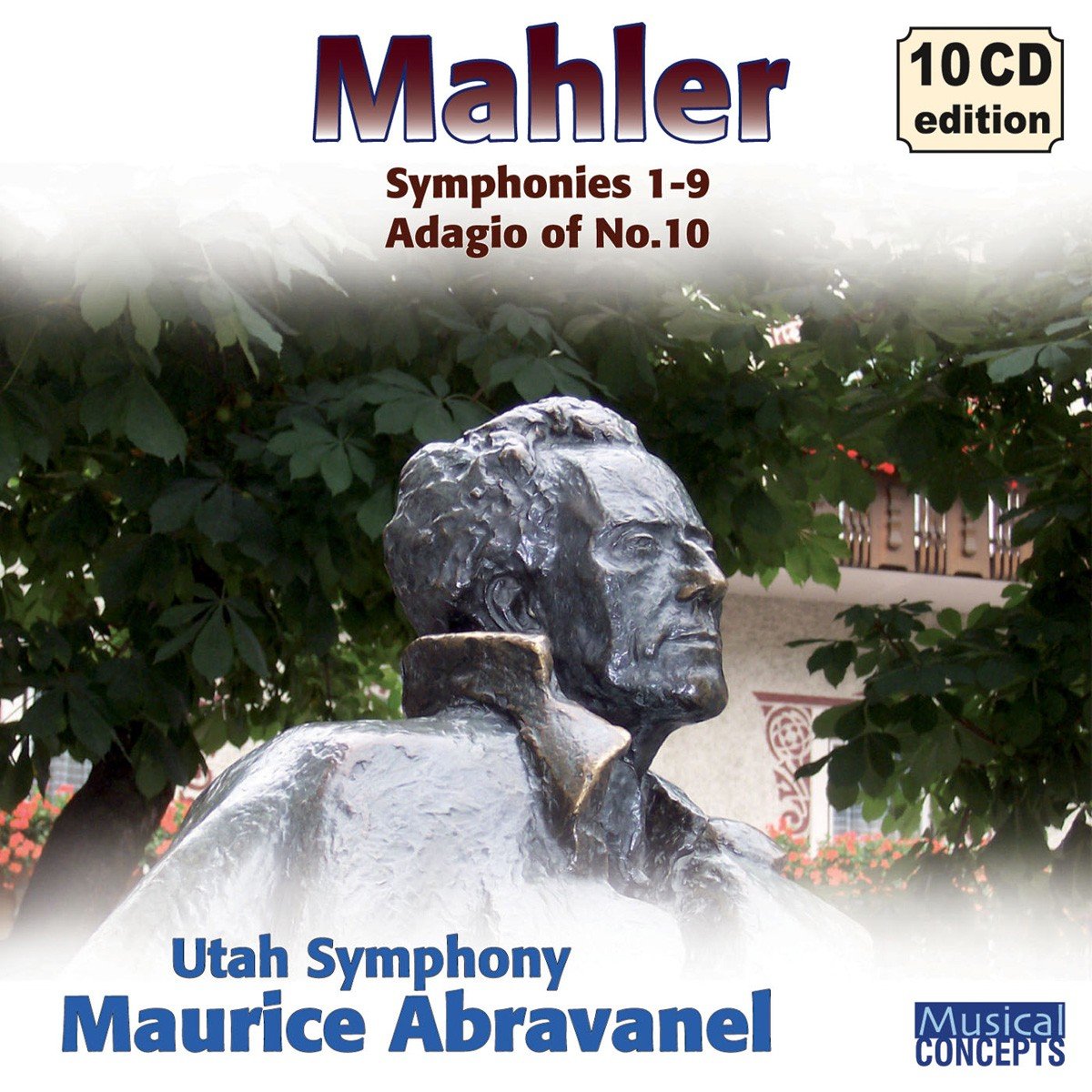 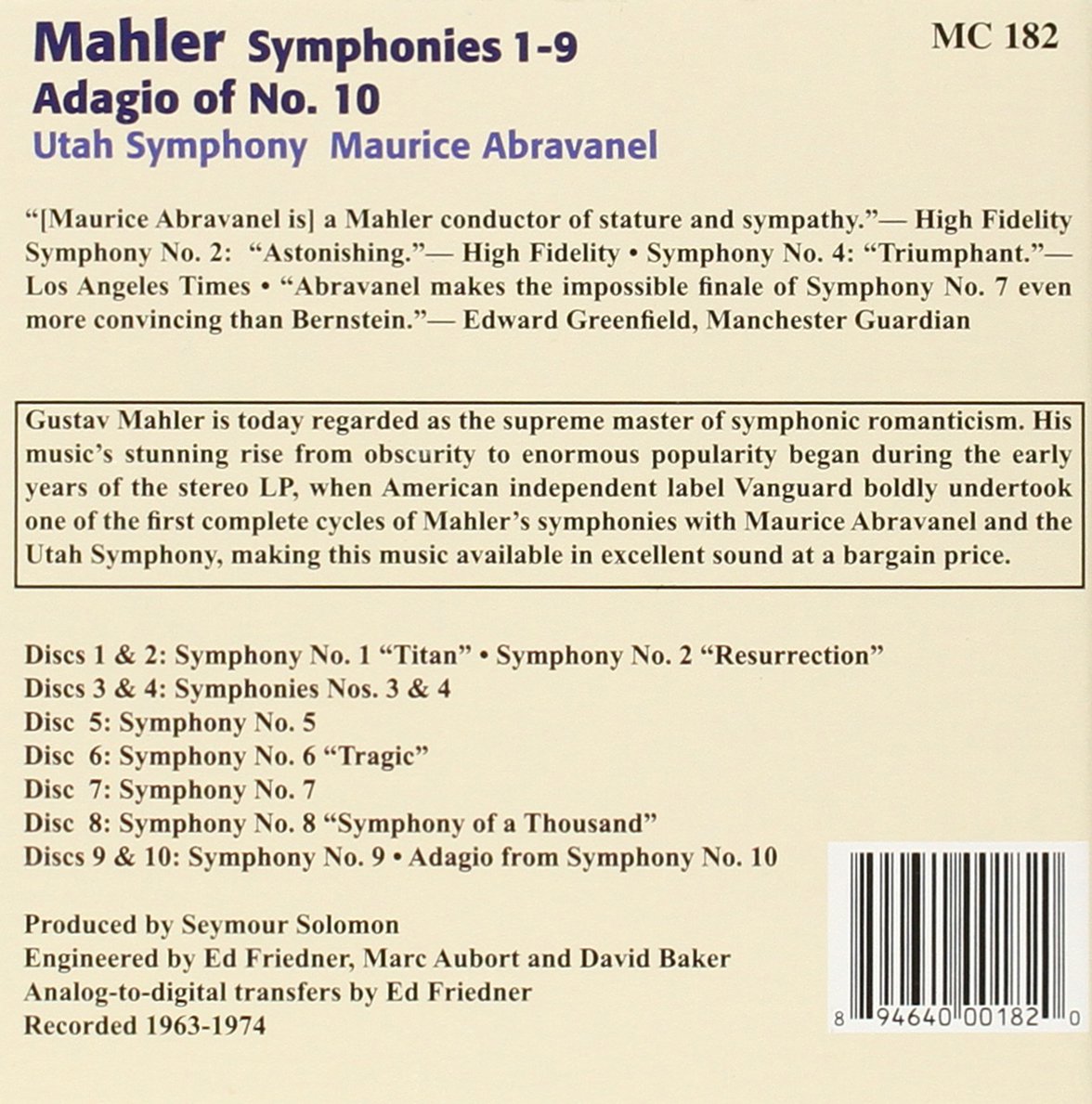 I was curious to hear Maurice Abravanel’s Mahler 9th. In the great “Mahler surge” of the 1960s and early 1970s, Abravanel’s complete cycle with his Utah Symphony Orchestra for Vanguard was “the last one” after those of Bernstein, Solti, Haitink and Kubelik – not in the sense that it came last (it was recorded between 1962 and 1974, which makes it roughly contemporary with the others. Haitink’s was begun simultaneously and was completed three years earlier, Kubelik’s was begun later but ended before) but because it is the one that seems to have been granted the least favorable critical reception. The notion (or at least the impression it has left in my memory) was always that Abravanel wasn’t competitive on account of his second-rate orchestra, and of an interpretive approach that was understated and superficial. So far I’ve heard only Abravanel’s Fifth Symphony, and it tends to bear out the negative reputation: the conductor zips through so fast that he makes it sound as if he was trying to break speed records of sorts, one-upping the venerable Bruno Walter, highlighting the military at the expense of the funeral, lacking flexibility other than going from fast to faster, and often pressed to the point of being under-characterized.

But I’ve had good surprises too, both with Abravanel and the Utah Symphony in other repertoires (see for instance my review of  Milhaud: Pacem in Terris / L’Homme Et Son Desir  – link will open a new tab to my review on Amazon.com, pending repost on this website), and with the sonics of Vanguard, and for some reason I had a feeling that this one could be one of them, on one front or the other

Bang on, and on both accounts.

First, the sonics. They are great. Vanguard doesn’t enjoy, I don’t think, the reputation of being a great audiophile label, unlike, for instance, Mercury. But from ALL the CD-transfers that I’ve heard, made by Vanguard’s original founder Seymour Solomon who was able to repurchase the rights to his classical music catalog in the early 1990s from the same company he had sold them to in the mid-1980s, it was. Vanguard doesn’t give any indication of recording date of this Mahler 9th (at least not on my European edition, 08 4012 72 – maybe they do on this later, US edition, SVC 29/30), not even a copyright year of the original recording, but the great and definitive  Mahler Discography (Second Edition, 2010) (link will open new tab to to my review) of Peter Fulöp dates it April 1969. There is a marvelous transparency of textures which lets you hear with a rarely-approached clarity every strand of Mahler’s dense part-writing – the first and second violins aren’t assigned to right and left channel as in some recordings, but Mahler’s divisi writing is clearly distinguished, and the cello counter-melodies come out felicitously well -, but with no artificial and aggressive spotlighting either, of the kind Solti was happy to obtain from Decca. Who needs digital when you have this?

And it sits well with Abravanel’s approach. There’s nothing of the superficial zipping through that, to my ears, marred his later Fifth (1974). Tempos in the first movement are rather expansive, but with no exaggeration as will later be found in the recordings of Levine or the later Bernstein (no critisim implied: exaggerated Mahler can be emotionally great Mahler – but not always a Mahler for all tastes), in fact closest to those of Bernstein’s Columbia version in New York, and everything flows very naturally, with a sure sense of tempo and tempo relationship. The symphony opens very spacisously and with a feeling of lyrical warmth, if not the unique tenderness that Giulini (from here on links will open new tabs to my reviews on Discophage.com) brought to these first phrases in Chicago in 1976. Everything is tastefully done, the instrumental events and outbursts don’t call attention upon themselves as they can with Solti or the generation(s) of later performers, but they are all there. Abravanel is beautifully responsive to the score’s tempo shifts – try for instance the “plötzlich sehr mässig und zurückhaltend” (suddenly very measured and held-back) at 8:01 – and shows a great sense of instrumental balances – you might be put off by the horn jumping at you at 9:37, but then Mahler indicates “softly sung, but much standing out” (“sehr hervortretend”) and that’s exactly what Abravanel does. There are a few spots where I thought his “instrumental events” (Mahler’s score is filled with them) could have slightly more bite and, yes, call slightly more attention upon themselves, or that he could animate slightly more some of the accelerandos to build more breathtaking tension, but then, those moments were rare and they are minuscule details, detracting nothing of the beauty of the music. And on the other hand, his great crashing climax at 18:58 is among the most crashing I can remember (nobody beats the old Bruno Walter from 1961) – but the timps at 19:04 after the crash, notated ff, are subdued rather than blasting (as they are, for instance, in Karel Ancerl‘s 1966 recording on Supraphon).

I also want to squash that notion that Abravanel’s Utah Symphony was a second-rate orchestra. Here as already in Milhaud’s Pacem in Terris, I hear none of that. I hear a tremendous orchestra, with a string section that may not sound as silky as in Vienna (depends if Vienna is in a good day) and violins that may sound a bit lean, but the woodwind and especially the brass sections are glorious, and there is an admirable precision of ensemble of all. If anybody can tell me what is “inferior” in the execution of this performance, please do – with precise details, please, not just generalities -, I’ll be happy (no irony) to learn a thing or two. When I hear this orchestra, I don’t particularly long after Solti’s London Symphony, Bernstein’s New York or Haitink’s Amsterdam Concertgebouw Orchestra.

The two middle movements may lack, in some spots, a touch of fury and wildness – which might also make them easier to take by many listeners; a typical example is the ff cello & double bass eighth-note chords at the end of the second movement Ländler at 14:25, which sound here very subdued when they could, should and have been blasting. But still, the movements are superbly done, the sonics afford great instrumental character (the woodwinds are particularly and felicitously in evidence in the Ländler), the tempos feel very natural, eschewing again the extremes of both slow and fast, although the beginning of the Ländler exudes a fine sense of nonchalant bonhomie, heightening the contrast when comes the “poco più mosso subito (tempo II)” at 2:41. I’d like to single out especially Abravanel’s shaping of the middle and appeased section of the wild Rondo-Burleske (third movement), starting at 6:17. Here, Bernstein established a kind of tradition that was followed by many after him, brutally slowing down the tempo and playing constant rubato, and even accordion, with the pulse (see my review of his 9th with New York). Sure, it all makes musical sense, and nobody without a score is likely to be shocked by it. But Mahler writes no tempo change at the beginning of that middle section, and his only indications are, a few bars later, “a little held back / etwas gehalten”, a little later “with great feeling” (mit grosser Empfindung) and further, “do not press / nicht eilen” (which, in Mahler, may, but doesn’t have to, be construed as an invitation to hold back a little). Abravanel observes exactly these indications, he plays in tempo, and his “etwas gehalten” registers more as an expressive relaxation than as a true slowdown. So, if you want to hear heart-on-sleeve emoting, Bernstein is fine. But if you want to hear it exactly as Mahler wrote it and decide whether it “works” that way too, go to Abravnael. Note that there is an unfortunate edit at 9:11, where the resonance of the harp’s last chord is brutally cut off – obviously a retake spliced in.

Abravanel tops it off with a Finale whose expansiveness had very little precedent in 1969 (only Horenstein back in 1952 had taken such a spacious approach), again remarkably faithful to every prompting, tempo shift and tempo relationship of the score, not emotionally intense like Bernstein’s (and Bernstein’s 1979 live version in Berlin, published by DG, explodes the controls of the Richter scale of emotional intensity) but elegiac, sounding almost like an extended lullaby.

Abravanel’s 9th was first reissued to CD by Vanguard Europe, in 1991 (the distribution rights were held by a Dutch company called Arcade). I don’t know if the later US reissues are improved remasterings, but I doubt that they are. Anyway, given the sonics on my European edition, I don’t even wish for better.

I’ll return later to the Adagio of the 10th, but this 9th alone makes this a worthwhile purchase. The Mahlerites were fortunate to be offered many great recordings of the 9th alreay in the pre-digital era. This one deserves to join the glorious roster. Re-reading some of the negative-to-damning reviews that it received leaves me incredulous (see more about that in the comments hereafter). It has been one of the neglected great versions ever since it came out in 1970. Almost a half-century later, it is time to make a public statement of its worth.