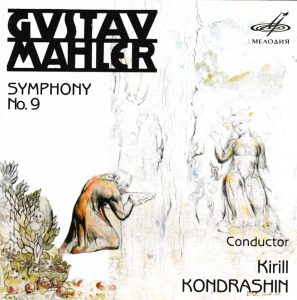 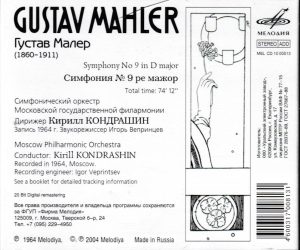 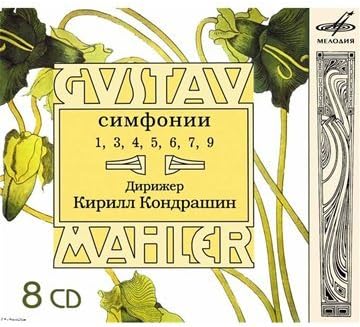 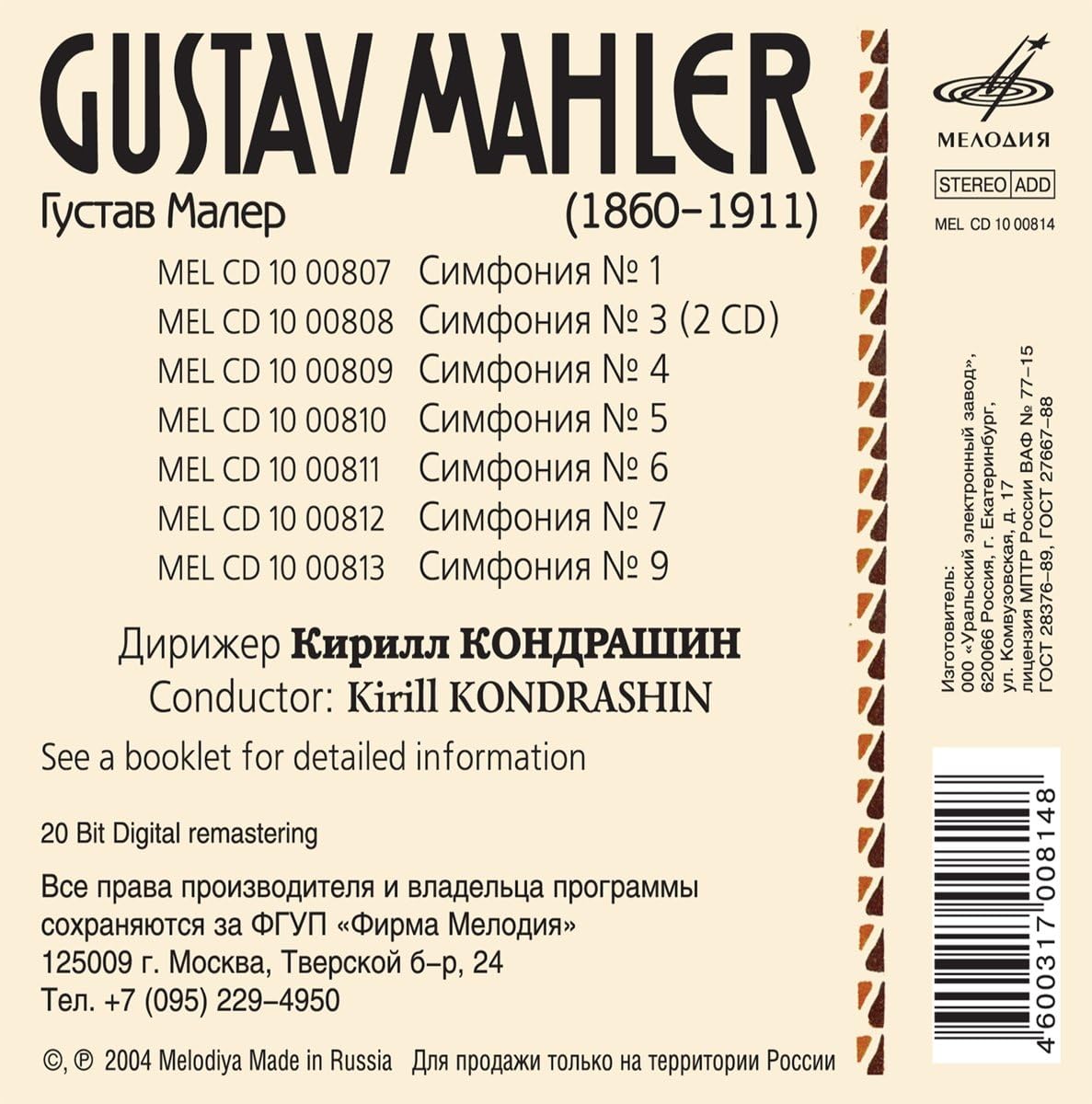 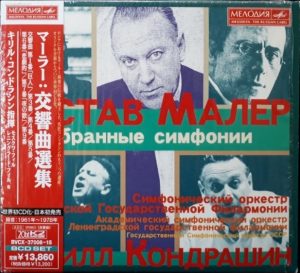 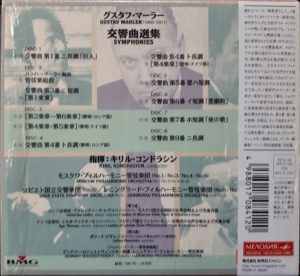 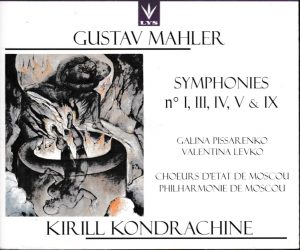 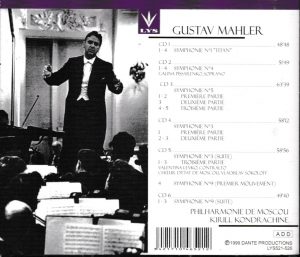 Note: the sonic perspective of the Dante transfer of the 9th is recognizably the same as the 2004 Melodiya CD reissue, but there is also a distinct LP surface noise that is not on the later CD reissue

Some coarse playing from Russia, but an interpretation of unique, passionate intensity
Originally posted on Amazon.com, 9 November 2011

I didn’t expect this. Sure, I knew what a great conductor Kondrashin had been, and I knew that he had been one of the main champions of the cause of Mahler in the Soviet Union in the 1960s, in a vastly hostile environment, despite Shostakovich’s admiration for and inspiration from Mahler’s symphonic output. But then, Mahler’s 9th, in the early 1960s, was still amply unchartered territory even in the West – there had been less than a handful of recordings in 1964, when this one was made: Walter’s pioneering 1938 live recording from Vienna (link will open a new tab to my review), Horenstein’s mono version for Vox in 1952, an LP premiere, Leopold Ludwig’s unjustly underestimated first stereo version for Everest in 1960 ( Symphony 9 ), and then Walter’s much admired stereo remake from 1961. Barbirolli‘s (also much admired) EMI recording with the Berlin Philharmonic came out in that same year 1964, and Bernstein‘s first go was recorded by CBS at the end of 1965, and first published only at the end of 1967, simultaneously with those of Klemperer , Solti (with the London Symphony Orchestra – he re-recorded it in the early 1980s with Chicago) and Kubelik. So if the 9th was still being discovered by conductors, orchestras and audiences alike in the West, what could it have been behind the iron curtain?

So I expected Kondrashin’s reading to be superficial, gliding on the surface but showing little understanding of the sound-world and psychological landscape of Mahler’s last completed symphony. Well, defying all my expectations, Kondrashin shows no trace of tentativeness or glib superficiality. I’m not sure his interpretation will be recognized by the Mahlerites as displaying a “true Mahlerian style”, whatever that is (I don’t think Mahlerites agree between them on what the “true Mahlerian style” really is, and anyway I’m not sure that what they view as the true Mahlerian style – whatever it is – would have been recognized by Mahler as his own), but it is certainly entirely committed, and uniquely passionate.

Sure, this is unmistakably a Russian orchestra, and it would be easy to be put off by the opening horns, terribly metallic when playing with stops and comically wobbly when not, and by the general coarseness and lack of refinement of the strings. But it is worth getting over these “provincialisms”. The opening violin phrases, which can be sung with so much lyrical warmth and even tenderness (just hear the Chicago Symphony Orchestra under Giulini in 1976), are here dispatched rather indifferently. But what ensues is a first movement of great passion rather than of funeral gloom. Tempo is comparatively swift and comes closest to Walter’s 1938 version. The rise of intensity leading to the first climax at 2:51 (measure 46) is obtained not – as with Barbirolli, another very passionate version – by a perceptible acceleration of tempo (Mahler indicates none), but only by an intensification of dynamics, especially from strings and brass: this is exactly how it should be. Kondrashin then accelerates to a very swift “Allegro” tempo on the big “military” climax at 6:02 with its resounding fanfares before the sudden return of Tempo 1, but he gets there progressively, without calling attention on the speed up.

From there on, however, like Barbirolli, he sets the stage for strong contrasts of tempo. His slow sections establish a mesmerizing sense of ominous stasis, like the “plötzlich sehr mässig und zurückhaltend” passage (“suddenly very measured and held-back”) at 7:20/measure 130, or the one starting at 12:44 measure 243 with a slow-motion, sneering military fanfare, as if played by the fallen soldiers themselves, leading to the ghostly “schattenhaft/shadowy” section at 13:30 measure 254, and likewise again at 16:41 (measure 321, “gehalten”/”held back”), conveying the impression of a snarling funeral procession where the dead would be invisibly dancing around the living. Conversely, when Kondrashin gets a chance to press on the gas pedal, he goes for it. Take for instance at 9:37, on the “allmählich fliessender” (progressively more flowing, measure 168) introducing one of those military brass fanfares, on which he very perceptibly presses forward, leading to a passage to be played “mit Wut (furiously) – allegro risoluto” (9:48, measure 174), where, within those 10+ seconds, Kondrashin has worked up his orchestra to a truly “wütend”, furious and almost suffocating condition. Same thing at 11:05/measure 211, when erupts a “leidenschaftlich” (passionately) violin outburst, or again “etwas fliessend” (somewhat flowing), at 15:01/measure 279. All this generates white-heat intensity and tremendous dramatic tension, that can be compared only to Walter in 1938, but now in vivid sound. And that the movement’s overall timing, 24:45, comes so close to Walter’s (which, at 24:40, in view of everything that was to follow, is almost shockingly fast) is even slightly misleading, as Kondrashin is much more prone than Walter in 1938 to adopt very slow tempos in the movement’s slow-moving sections, which means that his fast ones are more furiously fast.

Kondrashin also has a great sense of instrumental color, and (unlike for instance Barbirolli, in a reading that remains a great one, in spite of THAT shortcoming), he never shies before the snarling brass, never smoothes out the edges. The horns may be very Russian-wobbly at the beginning, but later the sonorous solo horn brings great romantic warmth to his solos (such as after 8:38, measure 151). And if, in the finale, that solo horn sounds too loud at 2:19 and again at 5:51, one must keep in mind that Mahler wrote there “stark hervortretend”, “strongly standing out” (measures 17 and 49). Those colors may not be always entirely Mahlerian – in the climaxes of the first movement the glaring trumpet seems right out of Scriabin’s Poem of Ecstasy (try 15:14 and after, measure 284), but, as objectionable as it may be, it does lend those climaxes a great and agonizing dramatic impact. The “deep bells” Kondrashin uses at 17:36 (measure 337) seem to have more high than really low frequencies and consequently don’t sound so deep, but they irresistibly evoke memories of Mussorgsky and orthodox processions.

Another good surprise are the fine sonics, even glaring in some of the brassy outbursts, but letting you hear with entire clarity not only every string line (essential in the outer movements, with their highly elaborate string counterpoint), but also Kondrashin’s care at getting the instrumental balances right. I didn’t expect that either of 1964 Melodiya. I can’t begin to mention all the great ear-catching instrumental details that jump at the Mahlerite’s ear, so I’ll limit myself to just two, taken at the very beginning of the symphony: in the aftermath of the first climax, at 2:51, the textures are still thick, with strings playing forte, and there is an accompanying figure played by third and fourth horns, in staccato eighth-notes, doubling the tremolos and staccato eighth-notes of violas and cellos. Because they merely underpin the lower strings, the horns are usually not really heard. They are here, played really staccato, and they have great character.

A little after the return of the Tempo 1, past the great climax with military fanfares (measure 108, 6:02), Mahler installs a funeral march rhythm in which he develops and combines the various themes stated in cell-form at the beginning of the symphony, and one of them (intoned at the beginning by resounding harp) is now picked up by tolling timpani, underpinned by pizzicato double-basses and cellos. Just listen to the double basses, at 6:46 (playing in fact not pizz but arco – maybe Kondrashin was using the corrupt 1912 edition and not the revised one): they don’t “play”, they bite.

Reservations about Kondrashin’s first movement include the two solo violins at 14:27 (measure 263 & 264), not very “zart” (tender), and given the tornadoes that preceded them, Kondrashin’s two big crashing climaxes at 10:41 (measure 202) and 16:21 (measure 314) are a bit underpowered and lacking violence, especially the second one (but there, the ensuing timpani blows are blasting). Nonetheless, despite the wobbly horns, glaring trumpet, coarse strings, the overriding impression is that of unique passion and white-heat intensity. What the 9th “talks about” is anybody’s guess and feeling, but many commentators have opined that, like “Das Lied”, it is about “Abschied” (farewell, leave-taking) and acceptance of the passing of things. If so, what Kondrashin seems to express in this first movement is that any acceptance is first opposed by violent, passionate and conflict-laden refusal.

In the Ländler Kondrashin’s choice of tempi strike me as very true to of Mahler’s indications and his tricky tempo relationships, and conveying much character. His Tempo I is halfway between Ludwig (fast) and Horenstein or Walter (slow), just a little more held back than Barbirolli and Bernstein, managing to capture both the sense of bonhomie of Walter and of merriment of Bernstein. His Tempo II doesn’t rush (observant of Mahler’s indication “POCO più mosso) but is very vigorous, and the slower Tempo III establishes the necessary contrast with the return of Tempo I. But more important than these choices of tempo is the great bite and saucy instrumental character of the Moscow players.

Fury and defiance (“sehr trotzig” is Mahler’s character indication) are the name of Kondrashin’s Rondo-Burleske, thanks to a brisk tempo (true to Mahler’s “Allegro assai” indication, and closer to Walter 1938 than to Walter’s more deliberate pace in 1961), and also to his glaring brass, much in situation here, and saucy woodwinds. Some listeners may find Kondrashin’s middle section somewhat lacking in “Empfindung” (feeling) because hardly relaxing the tempo to let the phrases fully sing, but then Mahler wrote here “etwas gehalten” (somewhat held back) and, like Walter in 1938 and Leopold Ludwig in 1959, Kondrashin conveys the intense lyricism through dynamics rather than (like Bernstein in 1965) constantly fiddling with tempo. The movement’s final presto (11:26) has the required drive and din, although, in view of what happened before, one feels that the Moscow orchestra had the reserve to be whipped to even more hectic frenzy.

By present standards, clocking at 21:49 Kondrashin’s finale is a brisk one, somewhere between Walter’s in 1961 (21:02) and Barbirolli’s, Bernstein’s (both 22:55) or Solti’s (22:53) – but way behind Walter in 1938 (18:06), and, to put things in perspective, all these versions are races compared to the extreme of Levine in 1979 (29:49). Not that it matters. The heart-wrenching emotion of that movement derives not from tempo (slow or fast), but from the intensity of string bowing (Mahler instructs them to play in “grosser Ton”), the agonized cries of despair of the brass, the sense of gloom of the bassoon and contra-bassoon, the floating, expressionless cantabile of the violins and woodwinds that makes you hold your breath (“ohne Empfindung”, Mahler instructs, which in context means without “expression” rather than “feeling”). Kondrashin has all that, and, as in the first movement, his swift tempi, together with the density of his orchestral textures, convey a harrowing passionate intensity.

This is definitely not a 9th for all tastes, and those whose sole standard of music-making is the refinement of the Berlin or Vienna Philharmonic will no doubt raise eyebrows. No, this is often coarse, and sometimes gaudy. But in passionate intensity it has little peers. It is certainly not to be recommended as a first version, and even less as a sole version. But serious Mahlerites should not pass it by.

P.S. April 2021: and for a piece of archaeology: an excellent review of Seraphim’s LP edition, SIB-6029, in the April 1969 issue of High Fidelity, by the magazine’s Mahler specialist Bernard Jacobson – eternal gratitude to https://worldradiohistory.com/ for making those magazines available online: 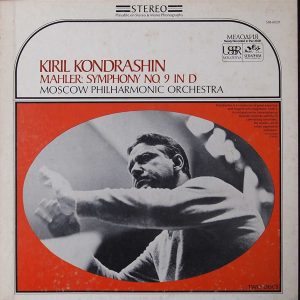 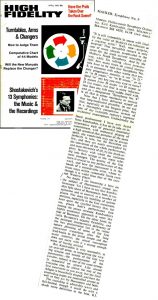