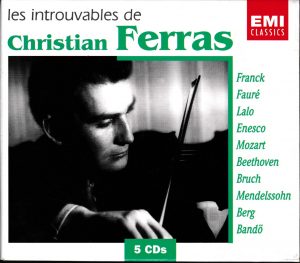 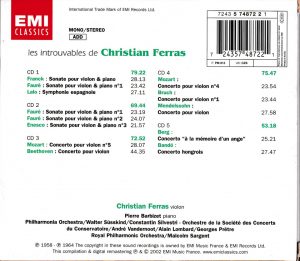 A fine tribute to Christian Ferras, from his EMI period (1957-1964) (now superseded by more recent and complete reissues)
Originally posted on Amazon.com, 30 July 2007

This collection, published on EMI France’s series “Les Introuvables”, serves as a useful reminder that Christian Ferras existed before his years with Karajan and DG (1964 to 1967) and his famous recordings of concertos by Bach, Beethoven, Brahms, Sibelius and Tchaikovsky, and of Sonatas by Brahms, Schumann, Franck and Lekeu (with his longstanding partner Pierre Barbizet). Most of these can be found on two budget collections from DG France’s series “Double”, “Christian Ferras Les Grands Concertos pour violon” (Beethoven, Brahms, Sibelius, and Schumann’s Violin Sonata op. 121), barcode 028943794923 (1993) and “Christian Ferras Grandes Sonates Romantiques pour violon et piano” (Franck, Lekeu, Brahms, Schumann), barcode 028945702728 (1997). (Post-script) Moreover, all the DG sonatas were reissued in 2009 by Brilliant Classics, 93791, barcode 842977037913, and the complete DG recordings plus more rarities were reissued in 2012 on 10 CDs, “L’Art de Christian Ferras”, barcode 028948066551.

Ferras’ tenure with EMI began in 1957 with Fauré’s 1st Sonata and Franck’s Sonata and lasted until 1964, with his remake of both Fauré Sonatas (all four recordings are included here), with the exception of an odd-return in 1968 for Chausson’s Concert for Violin, Piano and String Quartet (not included, but once available on CD in an all-Chausson collection, on 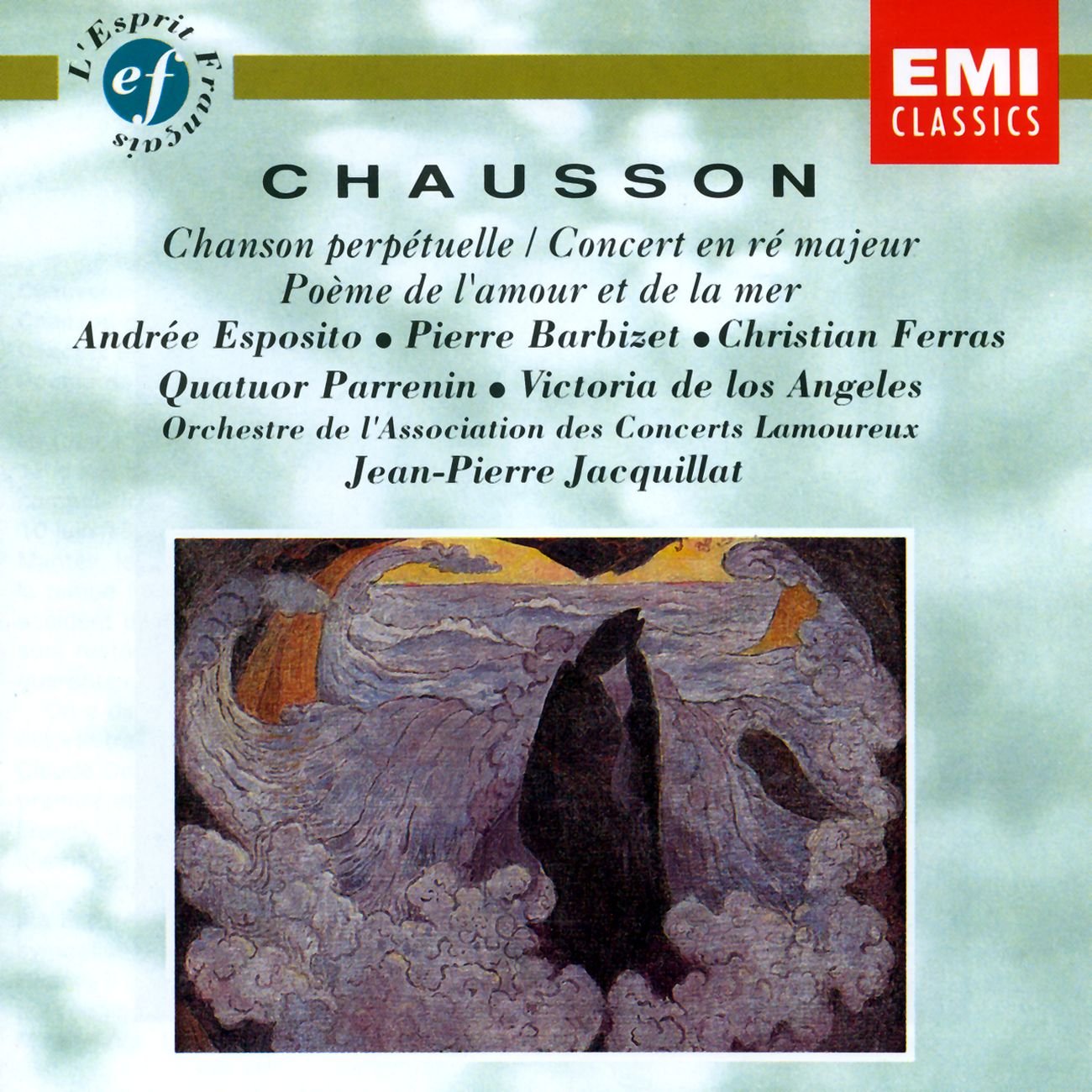 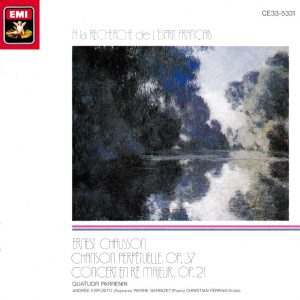 As often with the French-originated “Introuvables” collection, the compilation is frustrating, as EMI has left out as much as it has included: Chausson’s Concert would have made a useful return, and it would have been nice to have Debussy’s Sonata and Ravel’s Tzigane back together with Enescu’s 3rd Sonata, their original LP-mate back in 1962, rather than having to purchase the two EMI 2 CD-sets devoted respectively to Debussy’s and Ravel’s Chamber Music, as fine as they are (Debussy barcode 077776741628 or 724356965621 or 724358639223, Ravel barcode 077776721729  or 724356927926 or 724358525526). Brahms’ Double Concerto from 1962 with Tortelier and the Philharmonia under Paul Kletzki, and Tchaikovsky’s Concerto with Silvestri (the latter was the LP-mate to Mendelssohn’s Concerto, here included) aren’t here, maybe because they had already been licensed to Testament, although its reissue came only two years after the release of this “Introuvables” set on SBT 1337 (2004), barcode 074967713372 (the Double Concerto had been reissued by EMI in 1991, in a 4-CD set devoted to Tortelier, “Tortelier les Grands Concertos pour  Violoncelle”, CMS 7 64069 2, barcode 077776406923). The absence of Berg’s Chamber Concerto, the original discmate to the Violin Concerto here included, is to be sorely lamented (both had been reissued in 1996 by French EMI on a CD now hard to find, barcode 724348360427 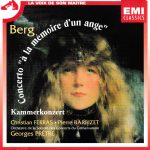 ). Recorded in 1963, the Concerto is a superb reading, with Ferras passionate, virtuosic and precise, and Prêtre, unexpected in this repertory, showing admirable attention to the myriad details of articulation and dynamics in Berg’s delicate and elaborate part-writing, but also a certain lack of power in the 2nd movement’s great climax at 6:20.

In 1959 with Malcom Sargent and the RPO, Ferras gives a good, traditional version of Beethoven’s Concerto, with admirable purity of violin tone, fine interplay with the orchestra and a leisurely finale with moments of fine lyricism but also traces of almost lumpish rhythmic squareness in spots (and with a truncated Kreisler cadenza). In Franck, Ferras doesn’t have a big, lush tone like Stern and Oistrakh, but it is luminous and precise, very “feminine”. While his playing can be passionate, it also has an aristocratic simplicity of delivery and absence of excesses, and Barbizet contributes a crystal-clear piano accompaniment with sparse pedalling. But the sonics are distant, more than in Oistrakh’s 1954 recording with Yampolski. The 1964 remake of Fauré’s 1st comes in much better sound than the 1957 essay, and the two partners are more open to the underlying current of Schumanesque turbulence, although one feels that they are not ready to sacrifice clarity of articulation for the sake of drive and passion.

The rarity in the set is Gyula Bando’s Concerto Hongrois from 1958. Stylistically, Bartok’s Miraculous Mandarin comes to mind in the 1st movement, and his Hungarian Dances in the finale as well as the Violin Concertos of Prokofiev and Shostakovich. It is hardly original or memorable, then, although it makes a pleasant listening, and one wonders why Ferras tackled it and EMI recorded it (in 1963).

But to me the prize of the collection and the reason for buying it is Enescu’s magnificent 3rd Sonata, one of the great Violin & Piano masterpieces from the first 50 years of the 20th century, and a catalog of original playing techniques and coloristic effects put at the service of a poetic invention of incredible evocative power. Other than the composer himself (whose 1943 recording with Dinu Lipatti was available in the early 1990s on a 2 CD-set from the Philips Legendary Classics series, 4 26100 2, barcode 028942610026, and on a similar set from the Romanian label Electrecord, barcode 5015524024307), Ferras can, alongside Menuhin, claim a special legitimacy in this piece, as both studied it with the composer. Menuhin made the premiere recording in 1936, reissued in 1996 on EMI Références 5 65962 2, barcode 724356596221, and 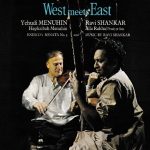 he re-recorded the piece 30 years later, on a recital titled “West Meets East The Historic Shankar/Menuhin Sessions”, reissued in 1999 by BGO Records, BGOCD445, barcode 5017261204455. Ferras turns out the most rhapsodic and whimsical reading of all, the closest to Enescu’s own (and fast) timings in the first two movements but even brisker and exuberant than Menuhin in the finale (where Enescu adopts a more moderate gait, more evocative of a Rumanian rustic dance), with swooning portamentos (all written by Enescu) which I find immensely fun, and phrasings that sometimes dispense from total respect of the printed score. Later versions (Ami Flammer, Sherban Lupu, Leonidas Kavakos, Patrick Bismuth, Miheala Martin, Patricia Kopatschinskaja) have delved deeper in terms of instrumental color (Enescu’s myriad details of phrasing, articulation and playing modes open up lots of possibilities), and probed deeper the variety of expressions they conjure, but among the “historical” versions (which go from Menuhin’s first and Enescu’s, to Isaac Stern’s classic and superb 1967 recording, on vol. 27 of Sony’s complete collection, barcode 074646453223), Ferras is quite unique for his unpredictability, very much in situation in this Gipsy-inspired commposition.

Ferras was a child prodigy. Born in 1933, he made his concert debut in 1946 at the age of 13, and from early on played with the most prestigious orchestras and conductors. But later, in the late 60s and early 70s, his career was severely thwarted by growing depression and alcoholism, and after 1969 he almost completely disappeared from the concert hall and the recording schedules. Despite an attempted and successful comeback in 1982, he committed suicide in September of the same year. He wasn’t yet 50.

I am indebted to the wonderful website from the French Christian Ferras Association for much of the discographic and biographical information contained in this review.

[And a post-script from May 2020. Since I’ve written this review, the discographic situation has changed. In 2013, Warner South Korea (Warner is now the owner of the EMI catalog) issued a 13 CD-set, PWC 13D0011  “Christian Ferras Art of Violin”, barcode 8809355971070, which collated all of Ferras’ EMI recordings – except, inexplicably, Berg’s Chamber Concerto. But  in 2017, Warner “in the West”  managed to fit on the same number of CDs, in its “Icon” collection, an augmented edition, with Berg’s Chamber Concerto returned at last and the bonus of the earlier Ferras recordings from Telefunken, “Christian Ferras The Complete HMV & Telefunken recordings” barcode 190295763084. This is now, with the 10-CD DG set mentioned above, THE must-buy for the fan of Ferras (in fact, I’ve just ordered both). All the pieces whose absence from the “Introuvables” set I lamented, are compiled there. It is documented on Discogs.com (link will open new tab).]