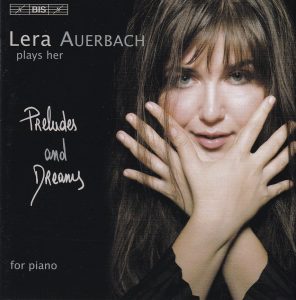 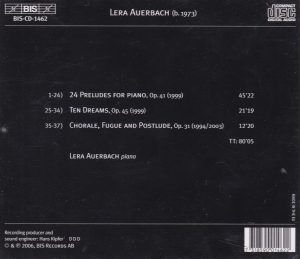 Lera Auerbach’s 24 Prelude op. 41, from 1999, are one of the pendants of a Tryptich which includes the 24 Preludes for Violin and Piano op. 46, and 24 Preludes for Cello and Piano, op. 47, all written in 1999 (but the two chamber works were premiered only in 2008, according to Auerbach’s page on her publisher’s website, Sikorski). In the composer’s words, which she applies to all three cycles, they seek to re-explore “the value and expressive possibilities of all the major and minor tonalities (…), as valid at the beginning of the twenty-first century as it was during Bach’s time”. The Piano Preludes are inventive and evocative, in turn dreamy and basking in washes of pedal resonance, or fierce and dramatic, making huge pianistic demands on the performer, using many pianistic resources, varied modes of attacks and pedaling – but stopping short of playing directly on the piano strings. Auerbach’s language is not romantic-sentimental “easy-listening”, but it is never dry and abstract, on the contrary it is always very suggestive and dramatic. Although nothing of it is mentioned in the liner notes, prelude No. 3 is a kind of variation on the Dies Irae over an obsessive ostinato note as in Chopin’s “raindrop” prelude. 4 (past its few bars of angry introduction) and some dreamy passages of 24 sound like voluble elaborations on what might have been terse and tongue-in-cheek Satie Gnossiennes. 9 & 14 are two-part contrapuntal and with the sardonic humor of the sardonic Shostakovich, and 16 & 19 sound like a take on a Bach-Busoni chorale. Auderbach doesn’t shun the romantic streaks either (22, and likewise in the Chorale from her Chorale, Fugue and Postlude op. 31, track 35). In 20 & 21 and some passages of 24, with their vaguely “Chinese” scales, the music of Cowell or Leo Ornstein came to mind, and the dreamier passages of 23 vaguely evoked music that Michael Nyman could have written.

The “Ten Dreams” op. 45, a cycle also composed in 1999, don’t always sound like dreams, many of them are rather nightmares (the first is even titled like that, “Allegro ma non troppo (As in a nightmare)”, although it isn’t the most nightmarish. In fact, other than the title, there is nothing to distinguish them from the Preludes, they are written much in the same style, some dreamy, some fiercely pounding. No. 3 (track 27) sounds vaguely post-Scriabin. No. 5, “Tempo di Marcia”, is a kind of spoof, Auerbach’s distorted and pounding take on what I recognize as the MacHeath-Brown duet from Weill’s Three Penny Opera, and ends with a distorted quote of Beethoven’s fifth. Chorale, Fugue and Postule op. 31 is an earlier work, from 1994, revised in 2003 and premiered (by Auerbach) in 2008. The Fugue is massive and stern, Bach’s Art of Fugue at its most stern revisited by Shostakovich at his most gloomy, with a salting of Busoni for the mass of sound, and Postlude is much the same, with another single note ostinato as in the third Prelude.

Auerbach was 25 when Preludes and Dreams were written. Without wanting to begrudge the interest of listening to her early piano music, what it lacks perhaps is the last degree of originality and personality. Possibly because Auerbach is herself an accomplished pianist, here is more stylistic variety here than the post-Shostakovich style of her Preludes for Violin & Piano and Cello & Piano. Still, she hasn’t invented (yet) a mode of playing the piano or taken you to an expressive world that you’ve never heard before. With an instrument so trodden and time-hallowed, it may seem impossible, but Henry Cowell, George Crumb and Stephen Scott, and even Messiaen, did in their time. I’ve come to experience in music that even when you think all has been said, all has never been said. There was evidently huge talent there, that only needed to blossom a little more – and evidenced that it had the potential to (there is something of it in the minute of huge percussive pouding that opens Dream No. 10). That she’s such an accomplished pianist can be a mixed blessing: the intimate knowledge of the past piano literature can be a source of inspiration for going beyond what all the other composers have said at the piano, or it can be a stifling burden of references. It was in 1999; Auerbach now has a huge catalog of works, and I need to follow up.

See my Auerbach introductory page for more info and resources on this composer, her discography and catalog of works.